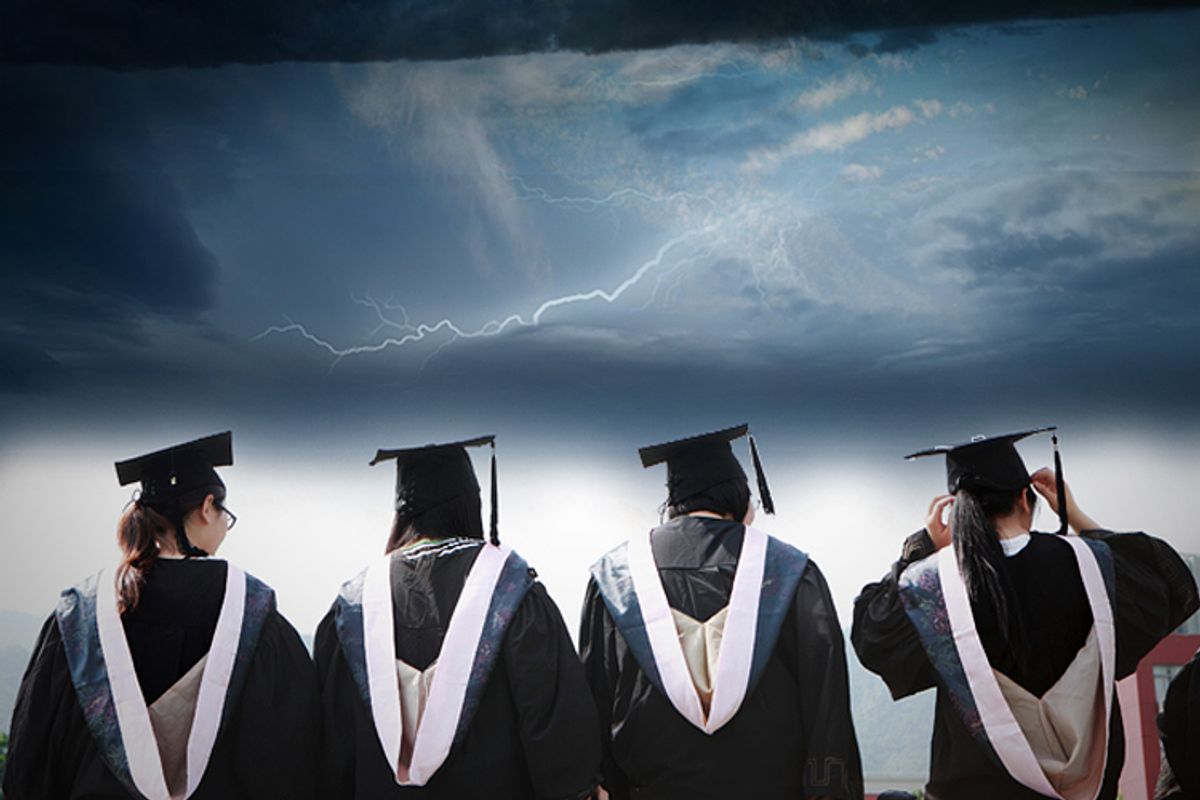 For all the talk of Congress supposedly working to “fix” the student loan crisis, it's actually on the verge of making the battle over the loans’ interest rates worse. A long-term compromise under discussion will allow the government to actually extract more money from borrowers over the long term -- while doing nothing to reform the terrible terms of student loans, mitigate the crisis for current borrowers, or fundamentally overhaul the broken system of higher education finance.

Here’s how it works. Currently, student loan rates are fixed -- Congress used a 2007 law to gradually bring rates down for five years, to 3.4 percent for federally subsidized Stafford loans, which go to students with financial needs. They extended this in 2012 for one year, but that rate doubled last week to 6.8 percent when Congress took no action. Under a bipartisan compromise worked out in the Senate that’s similar to a proposal that already passed the House, rates would vary from year to year depending on 10-year Treasury bill yields, though the rate would be fixed over the life of the loan. Undergraduate loans would get set at 1.8 percentage points above the 10-year T-bill rate; graduate loans would be the T-bill plus 3.4 percent, and Parent PLUS loans (used by parents when students hit Stafford loan borrowing limits) would be the T-bill plus 4.5 percent.

The Senate group, which secured the support of Dick Durbin and Tom Harkin on the compromise, claims that the new student loan rates, if applied based on today’s 10-year Treasury yield of 2.57 percent, would all be lower than under current law. This is technically true but wildly misleading. Current law in this case is based on what happened after July 1, when the lower subsidized rate expired: compared to that 3.4 percent rate, the new figure of 4.37 percent is nearly a full point higher. Because the new bill makes no distinction between subsidized and unsubsidized undergraduate loans, students with financial need will end up paying higher rates, effectively paying for the lower unsubsidized rates open to all undergraduates.

More critically, this is likely the lowest that the 10-year Treasury rate will be in years. The Federal Reserve has hinted at pulling back on its monetary stimulus for weeks, and these communications have sent all interest rates through the roof.

As University of California, Berkeley, economics professor Brad DeLong shows, the market clearly believes that the Fed is more interested in keeping inflation down than anything else, and will soon reverse the policies that have kept interest rates so low since the Great Recession. So the cost of borrowing should rise, not just now but in the future. While this is consistent with the economy improving, with this new market-based approach to setting the student loan rates, that means that borrowers in each successive year will fork over more for their loans. The White House projects that most students will eventually pay higher rates, starting around 2016. Student loan rates will be capped at 8.25 percent for graduates and 9.25 percent for undergrads, but that translates into billions of dollars transferring from student borrowers to the government. The feds will make $51 billion in profits off of student loans just this fiscal year.

This compromise was the inevitable outcome ever since the Obama administration put a similar proposal tying student loan rates to Treasury bill rates in their Fiscal Year 2014 budget. The true irony of the “#dontdoublemyrate” theatrics this year is that the White House and Republicans didn’t really disagree on their long-term vision for student loan rates. Both wanted to tie the rate to similar market conditions, even if the details were a bit different (the White House plan didn’t even cap the interest rate, so it was arguably to the right of the final compromise). This completely undercut congressional Democrats who wanted to wedge Republicans into extending the lower rates on subsidized loans for another year, just as they did in 2012. Republicans could always point to the president’s budget and say that they were merely offering the same proposal.

The idea that a compromise falls right in the sweet spot between a Republican demand and a presidential budgetary line item should cause concern for those who don’t want to see Social Security benefits cut through a change in the cost of living adjustment known as “chained CPI.” This student loan business is the same blueprint.

Ultimately, the interest rate debate was a distraction. There are far more pressing challenges to financing higher education so that everyone has the opportunity at an affordable college experience without burdening themselves with tens of thousands of dollars of crushing, inescapable debt.

As I wrote last month, the student loan carries no characteristics of any other loan product sold in America; it looks more like a medieval indenture, a debt burden that borrowers cannot escape no matter what the circumstances. If we’re going to keep the system where students fund their education by taking on debt (and we shouldn’t), the rate is less of an issue than changing these onerous terms. We should allow borrowers to refinance, and discharge their debt in the event of bankruptcy (Sherrod Brown has a refinancing bill in the Senate). We should put a statute of limitations on how long debt collectors go after student debt. We should not allow Social Security payments to be garnished to pay off debt incurred as a young adult.

Looking to future borrowers, the income-based repayment plan passed under George W. Bush and expanded under President Obama, which caps monthly payments at 10-15 percent of a borrower’s future discretionary income (basically the first $20,000 or so of earnings is exempt) for 20 years, is a nice idea and could be improved with better terms. For example, an innovative idea from Oregon would apply income-based repayment at a lower rate to all of the state’s public colleges and universities.

But ultimately, if you think higher education is a public good that benefits society, you have to demand that it reach higher on the list of state and federal spending priorities. That means real investment in higher education, particularly at the state level, where most of it is funded. Students need a “public option” of free or near-free public higher education as an alternative to unaffordable private colleges. And policymakers can use their leverage to force down the skyrocketing tuition at colleges and universities.

President Obama has hinted at this in speeches, but he could propose to deny institutions access to federal grants, and even the eligibility for federal student loans, unless they lower tuition. The Education Department did try a version of this with for-profit colleges, those “diploma mills” that derive most of their profits from student loans, selling low-income students on the benefits of their institutions and then delivering next to nothing. A federal court struck down a law that would apply student loan eligibility to whether graduates can get gainful employment, but Congress could step in with new rules.

The point is that the student loan interest rate was really a tiny speck of the massive amount of work that needs to be done to end this perverse system, where 18-year-olds cannot make sensible plans for their own future without burying themselves in debt with no hope of escape. That Congress managed to botch even the interest rate issue does not bode well for tackling the broader problem. If any good can be drawn from it, however, it’s that a movement of student borrowers, aware of the unfairness of the current system, has been activated. Hopefully they can become loud enough that politicians can no longer avoid them.