The awesome, original "Orange Is the New Black"

The Netflix show is explicitly about the consequences of breaking bad, but never glorifies it 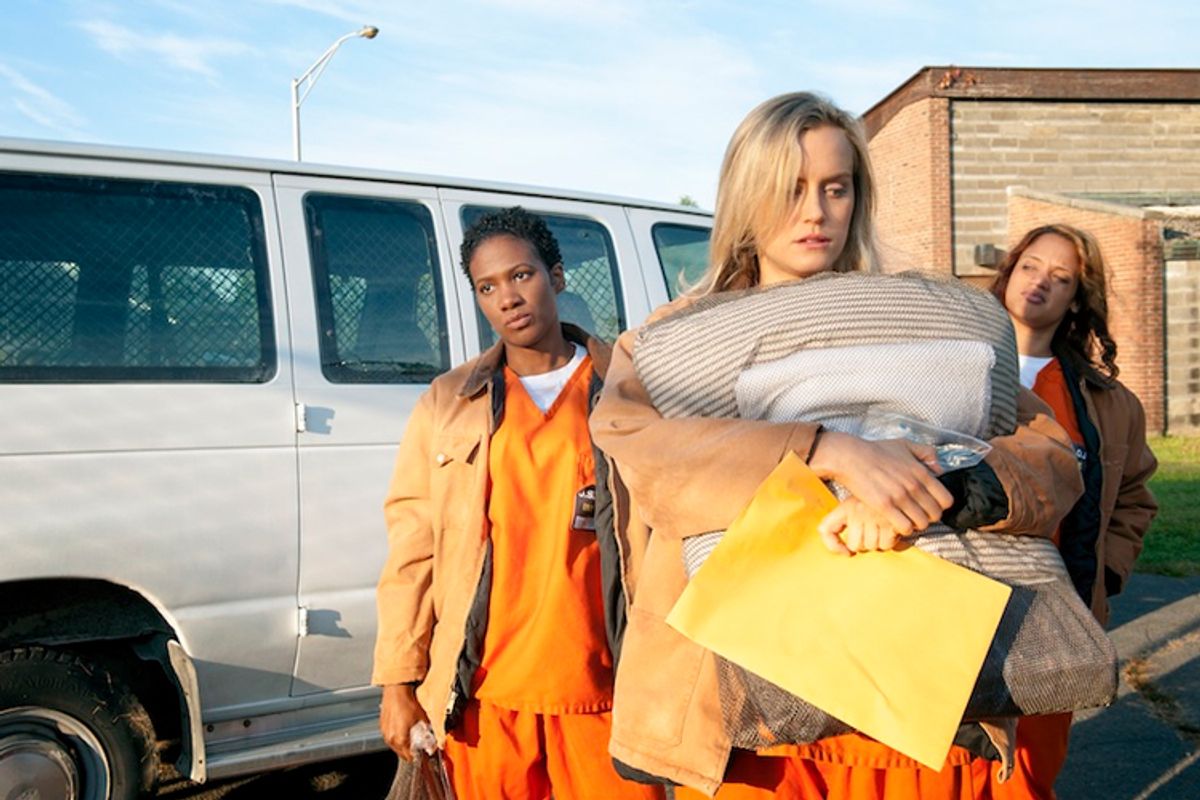 “Orange Is the New Black,” Netflix’s hilarious, addictive, fantastic new series about the goings-on at a low-security women’s prison, is available in its entirety right now on the streaming service, which presents a problem. I want to tell you how much you should go and watch it, but I am in a hurry to get back to watching it myself, because watching “Orange Is the New Black” is all I want to do. When I finish all 13 episodes, I suspect it will still be all I want to do. It’s that good.

“Orange Is the New Black”—  which I will henceforth refer to as “Orange” because “OITNB” looks like the name of a boy band— stars Taylor Schilling as Piper Chapman, a Smith graduate who once transported a large quantity of drug money for her then-girlfriend, a sexy high-end heroin importer named Alex (“That 70s Show’s” Laura Prepon, who has never been close to this good in anything else).  A decade later, Piper is ensconced in the full bougie Brooklyn, N.Y., lifestyle. She’s engaged to a writer named Larry (Jason Biggs) and starting an artisanal soap company with her best friend Polly — Barneys just agreed to carry the line — when she finally gets busted, pleads out, and is sentenced to 15 months at Litchfield women’s correctional institute, where Alex is also serving her time.

Piper does not, as her WASPy mother so indelicately and wrongheadedly puts it, “belong” in this sort of place: She’s white, affluent, college-educated. Piper immediately benefits from her difference — the prison caseworker sees in her someone he can "communicate" with — but also begins to unravel. She is the kind of woman who is used to having problems go away by telling the truth and saying sorry— doing what your mom told you to do on the playground — but that sort of touchy-feely stuff won’t work in a place where, as Piper’s commanding roommate later puts it, “they don’t believe the truth.”

But “Orange,” created by Jenji Kohan of “Weeds” and based on Piper Kerman’s memoir, is not just a story about how a privileged white girl learns to tough it out, or a story about how a privileged white girl really is just like everybody else. The show has way too much respect and affection for all of its other characters to be either so condescending or idiotically p.c. (In the biggest story line misstep, Piper is denied food in prison while the show flashes back to the time she went on a seven-day juice cleanse: It's the series' most on-the-nose moment.)

There are dozens of other inmates at Litchfield, of all races and ages, and each episode focuses on one in particular, filling out her back story and the series of predicaments and bad decisions that led to her sentence. There’s a fierce Russian cook, a very dry ex-junkie played by Natasha Lyonne, a highly dysfunctional mother-daughter duo, a chola obsessed with the Smiths, a transgendered former fireman, a crazy Jesus freak, a nun and many, many more.  If “Orange” can be accused of anything, it’s of being almost universally sympathetic to this diverse, uproarious, fierce group of distinctive women: They may be in prison, but the only sociopath on this show is one of the guards (Pablo Schreiber, playing a creep named Pornstache).

Without ever being anything less than wildly entertaining, “Orange” is effortlessly in conversation with all of TV's biggest themes, and, boy, does it have something new to say about every single one of them. Here is a show that is explicitly about the consequences of breaking bad, but that never glorifies it: Violating the law does not for one moment seem cool, just a bad choice that gets you locked up. By virtue of its almost entirely female cast, it’s an instant retort to the macho-man craze, proof positive that female dynamics are more than interesting enough to build a show around, whether they be romantic, maternal, familial or tribal. It stars a white girl, but in its racial diversity and frank acknowledgment of racial issues is a lesson to every show that does not address these subjects as a matter of course. There’s a scene where the camera hops around the cafeteria from the white table to the black table to the Hispanic table  (prison is a lot like high school), with each group being more racist than the last. It's probably the sharpest, funniest racial bit I’ve seen on TV since “The Chappelle Show.”

“Orange” is expansive, moving, crazy fun. It is so much these things that you may not even notice that it has hopped right out of some of quality TV’s most staid, boring cul-de-sacs, tossing over the fetishization of violence and the antihero and his hyper-heterosexuality for something new, complicated, really female, really gay and really delightful. It’s a great show — I’m going back to watching now.