What it really means to woo white voters 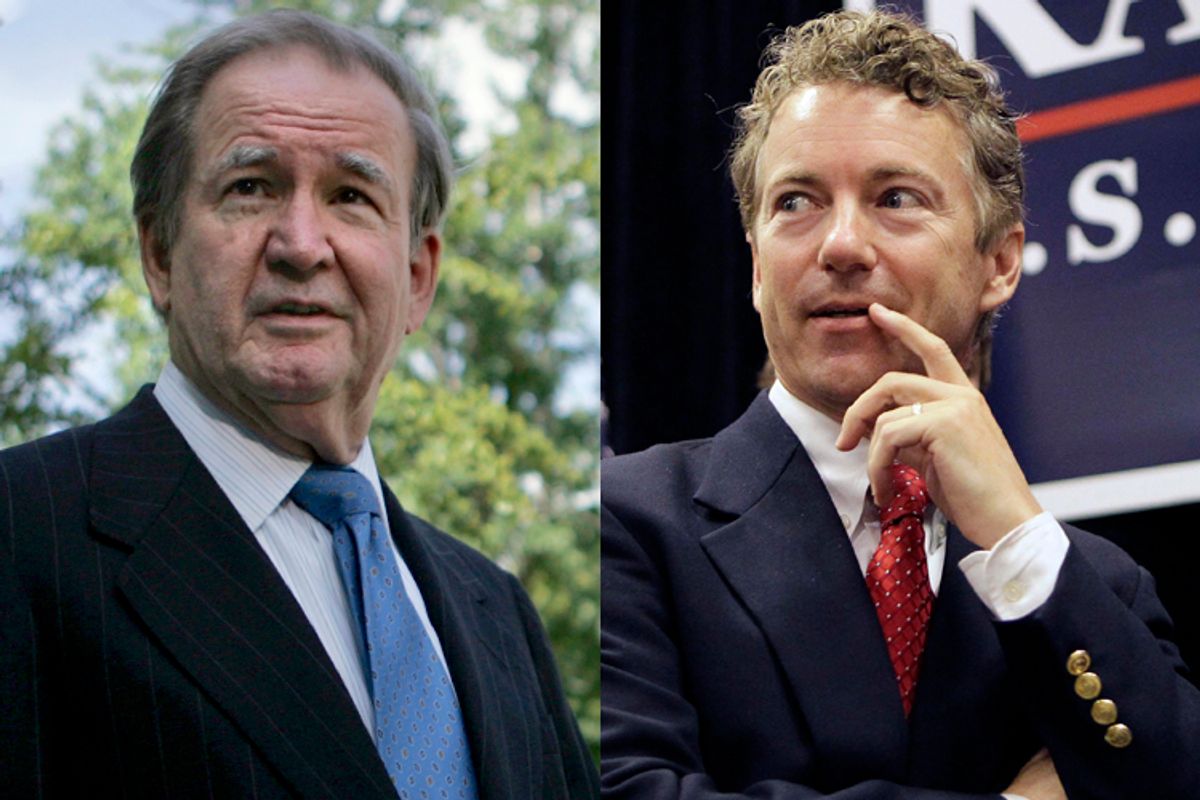 I have a visceral reaction to conservatives arguing that Republicans should forget about trying to lure Latinos by passing immigration reform, and focus on turning out white voters instead. When Phyllis Schlafly or Pat Buchanan makes that pitch, it’s clear to me, it’s racist. They are urging their party to rely on the 50-year narrative of white grievance, perfected by Buchanan for Richard Nixon, that turned many white working-class people against Democrats. In some quarters, it’s a 150-year narrative that blames Abraham Lincoln for the War of Northern Aggression, and considers the father of the Republican Party a racist hypocrite.

Yet not everyone reassuring the GOP that it can continue to rely on white voters is making a racist argument. Real Clear Politics’ Sean Trende’s work on “missing white voters” tries to show that there are gains to be made by appealing to disaffected downscale whites who didn’t vote in 2012 (more on that later) – though he doesn’t argue that the party should ignore outreach to Latinos, blacks and Asians.

Still, it’s very hard for me to imagine a Republican effort to appeal specifically to white voters that doesn’t involve a strong element of racial grievance and a demonization of “government” as being the enemy that takes your money and gives it to those (non-white) people. That’s the Nixonian narrative that still played in 2012.

Having said that, I realize: I’ve argued that Democrats should do more to appeal to working-class whites. So what makes me think Democrats can reach more whites with an appeal that’s non-racial, while Republicans’ get-out-the-whites strategy can only rely on grievance and backlash?

Posing that question to myself helped me make a little more sense of the Twitter backlash against my piece, “How to Talk About White People” in April. I made three recommendations: Don’t assume they’re all Republican, all wealthy or all racist. I didn’t think it would be controversial, but it was. Some of the reaction from critics involved wild projection: that I was suggesting our “newest minority” might face discrimination or suffering on a par with the problems experienced by blacks, Latinos and Asians; that it was somehow time for America to turn to the special problems of white people. That’s silly.

It’s possible that it sounded like I was calling for special programs for working-class whites (though I wasn’t). I’ve long argued that a populist economic recovery program to rebuild the opportunity ladder that once led to unrivaled social mobility in the U.S. would appeal to white voters. That’s why the auto restructuring helped President Obama do better with white voters in Ohio than Virginia. Mostly, though, I was talking about the way we talk about politics, urging Democrats not to alienate white voters with triumphalist claims about a “coalition of the ascendant” that leaves them out.  I agree with Ruy Teixeira that the real gains to be made are among white women and white millennials. Democrats should want not just to consolidate the “Obama coalition,” but to expand it.

For Republicans, though, it seems very tough to craft a strategy to consolidate and even expand their share of the white vote without resorting to at least veiled racial appeals. Although we can’t accurately generalize about any racial group, and mostly shouldn’t, when we’re talking politics, we can at least take for granted that black voters, Latino voters, Asian voters, American Indian voters are united by the goal of ending racism and discrimination in a country where for too long, white people have disproportionately controlled wealth and political power. So what would unite white voters -- unless we assume that they are united in opposition to policies designed to eliminate or minimize their racial advantages? What interests do we plausibly share primarily as white people -- as opposed to as union members, tech workers, single mothers or hedge fund managers? What “issues” unite white voters that aren’t also potentially appealing to blacks, Latinos and Asians?

Take immigration reform. There’s an implicit, and sometimes (as in Schlafly’s case) explicit racial element to much GOP opposition. You don’t have to be a racist to oppose it – you might legitimately worry about the impact on low-wage workers, for instance – but there’s a strong strain of nativism and white paranoia in some of the opposition. A lot of the Republicans who support immigration reform do so because they think it will help the party not look as hostile to Latinos and Asians; many Republicans who oppose it are perfectly happy to look hostile to those groups because they think it helps them with their white base.

Similarly, you might argue that the GOP could run up its margin with white voters by being even more stridently the anti-government party, since white voters tend to be more skeptical about the role of government than non-white voters. But ever since people like Pat Buchanan and Lee Atwater managed to racialize issues like taxation and government assistance, white voters’ skepticism about government can’t be completely divorced from race. Indeed, that’s why Mitt Romney and Paul Ryan, when they saw that Romney wasn’t closing the deal with working-class whites, turned to lies about Obama gutting the work requirement for welfare, or stealing your Medicare to pay for their Obamacare.

Many conservatives have argued that the GOP needs a more populist economic program, but it’s not clear what that would look like. Sean Trende writes: “Ultimately, the basic prescription for the GOP is a healthy dose of economic populism. This includes a lot of changes Democrats would presumably enjoy, such as jettisoning the pro-big-business, Wall Street-style conservatism that characterized the Romney campaign for something authentically geared more toward downscale voters.” But no one has explained what that means.

There is, apparently, something called “libertarian populism,” which Paul Krugman debunked in the Times Friday (and Mike Konczal did with more detail and precision in the Washington Post). Krugman’s optimism that libertarian appeals to slash spending can’t work to win downscale whites, because downscale whites depend on programs like Medicaid, food stamps and unemployment, might be a little bit too optimistic. The Times itself reported last year that the reddest states and counties tend to get the most government assistance. Clearly there are some white voters who either don’t understand that right-wing Republicans want to slash programs they rely on, or don’t care, because they believe the rhetoric that the big bad Obamastate is strangling the economy, and maybe they wouldn’t need government assistance if government would get out of the way.

Still, “libertarian populism” sure does look like the same old far-right policies with a new name. Sen. Ted Cruz is kind of typical: In his speech to New York Republicans in May he insisted Mitt Romney’s 47 percent remarks doomed his candidacy. “I am going to suggest that the last election can be explained in two words: 47 percent,” Cruz told the wealthy crowd. I have to tell you as a conservative … I think Republicans are and should be the party of the 47 percent.” But then he went on to back programs, including abolishing the IRS, that would actually put more money in the hands of the 1 percent.

Of course, if more Republicans coalesced around a genuine, race-neutral program of economic opportunity, it wouldn’t just appeal to white voters. As Sean Trende acknowledged in an email,  “I actually think that sort of switch probably enhances the GOP’s appeals to Hispanics (and, at the margins, African-Americans). “ So it would not necessarily serve to run up the GOP’s margin among whites.

In the end I can’t see how any appeal designed expressly to woo whites doesn’t traffic in race and racial grievance and tribalism. There’s still entirely too much willingness on much of the right to play with racial fire, as evidenced by Sen. Rand Paul refusing to fire his pro-secession “Southern Avenger” Jack Hunter, while praising a book that paints Abraham Lincoln as a racist hypocrite, all to appeal to the segment of the GOP base that admires “libertarianism” because they translate it as “states' rights.”

But Trende also takes issue with another key component of the “demography is destiny” argument for why the GOP is doomed: It takes for granted that Latino voters, in particular, will continue to vote overwhelmingly Democratic, which is not necessarily true. I agree with him, which is why I’m uncomfortable with the argument that “the Obama coalition” is a long-term fact of political life. Coalitions change.

Interestingly, Trende argues that the decline in white voter participation was most notable in the West and Midwest, what he calls the former “Ross Perot” strongholds. It’s possible that the Pat Buchanan/Lee Atwater racial grievance strategy isn’t working as well as it did, except in the South, and downscale whites outside of the South don’t see either party offering much that’s going to make their lives better. Some of those voters are genuinely up for grabs, especially in the younger generation, and there’s no reason both parties can’t compete for them.

Both parties should be competing for everybody. But Republicans too easily fall back on race, when all else fails. John Boehner’s not a birther, for Pete’s sake – but he doesn’t think it’s his job to tell other Americans what to think about President Obama’s legitimacy. Mitt Romney’s not a racist, but when struggling for white working-class voters, he reaches into the Lee Atwater playbook for lies about Obama and welfare.  Whatever you make of Trende’s data, I don’t think he is arguing that the GOP should exclusively focus on white voters, let alone use racial appeals to reach them. But I do understand why it could seem that way: Offering Republicans hope that they’re not facing demographic extinction will likely encourage the nativists and the racists to keep on keeping on, and they don’t need any encouragement.