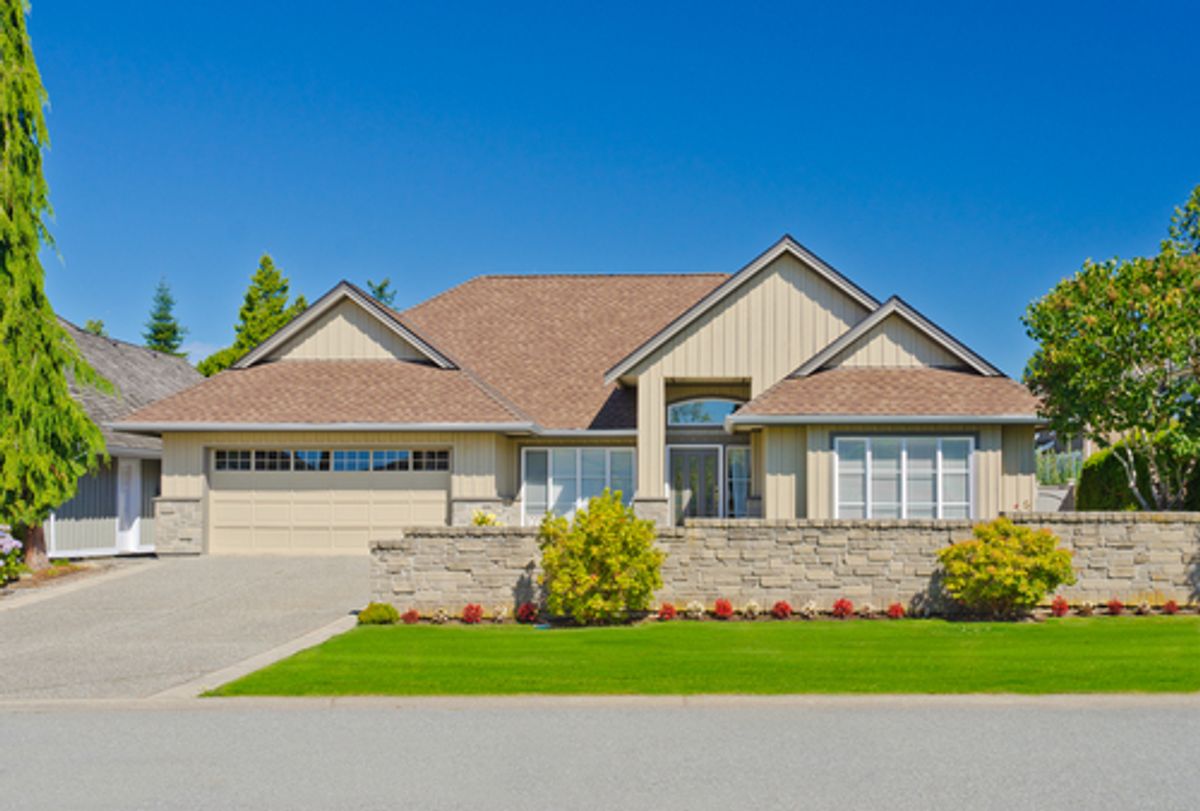 Last Friday, while most Americans shook off their post-Fourth of July hangovers, the United States economy quietly set a record. Interest rates for mortgages rose at the highest one-day rate in at least 10 years, and perhaps in the recorded history of the mortgage market, according to Mortgage News Daily. If you got a quote for a mortgage rate on Wednesday, by Friday it was roughly 0.375 percent higher. The average rate is now pushing close to five percent, from a low of around 3.25 percent just two months earlier.

The reason for all of this? The Federal Reserve. For the past several months, the Fed has been itching to “taper” their monetary stimulus by pulling back on the purchase of mortgage-backed securities, which they now devour at the rate of $85 billion a month. These purchases keep long-term mortgage rates low, and any halt to the exercise would reverse that trend. In this case, just the threat of a taper has caused all interest rates, but especially mortgage rates, to skyrocket. This mortgage rate chart from the St. Louis Federal Reserve Bank tells the story:

The Fed has hinted at tapering its stimulus because of what it sees as underlying strength in the U.S. economy; the trigger for Friday’s massive rate increase was a better-than-expected jobs report. So the impact of the rate rise depends on your view of the state of the nation.

Paul Krugman believes rising mortgage rates will have a negative effect, and it’s hard to disagree. Despite improving housing fundamentals, higher mortgage rates mean more expensive monthly payments, perhaps enough to keep itinerant buyers away. The general rule is that a one percent increase in mortgage rates equals a 10 percent reduction in affordability, so we’ve seen around a 17 percent reduction in just two months. There is evidence to suggest that a similar rate spike in 1994 had an impact on home sales and prices (others see 1994 as an anomaly). Certainly, the rate shock has slowed a boom in mortgage refinances; if new rates are not much lower than a borrower’s current rate, then they are not likely to go through the hassle of redoing their loan. This takes away a modest but legitimate stimulus for the economy; refis lower monthly payments and put more money into homeowners’ pockets. And refinances are a major profit center for banks, as they enjoy fees from every new loan; with refi applications down sharply, mortgage lenders are laying off lower-level employees en masse.

Other experts shrug at rising mortgage rates; not surprisingly, this includes leading mortgage lenders like Wells Fargo. They claim that rising home prices bring more homes out from underwater (when they owe more on the mortgage than the house is worth) and allows them to refinance. Goldman Sachs analysts add that mortgages are historically cheap even at five percent, and that housing is still relatively affordable even with the run-up in prices and interest rates. And if rates are rising because the economy is actually improving, buyers who are confident in their economic situation could enter the market, and they may accelerate their decision to get in before rates rise further. Douglas Duncan, the chief economist at Fannie Mae, distilled this viewpoint to its essence by saying, “There’s no strong correlation between interest rates and home prices.”

However, Bill McBride, the analyst who writes the influential blog Calculated Risk, pointed out a key difference between this era and those that came before it: the rise of investor purchases of single-family homes.

THIS TREND HAS BEEN in force for well over a year: hedge funds and private equity firms, stocked with billions of dollars from Wall Street, have entered the most distressed markets in the country—places like Phoenix, Atlanta, and Las Vegas—and attempted to scoop up as many discounted properties as possible. The analyst Campbell HousingPulse believes that, in April, 68 percent of all distressed homes nationwide sold to these types of investors, who plan to rent them out for a few years before selling. This strategy allows profits from the rental revenue streams in the near term, and from higher home prices when they eventually sell.

The idea of the same people who created the housing bubble coming back to become your landlord is nerve-wracking enough. But this institutional money may be distorting the entire housing market. Some claim investor purchases reflect the long-term average, and that there’s nothing to worry about. But Wall Street investors are focused on very specific geographic markets. And home prices in these areas have surged much more rapidly than in the rest of the country. According to the April 2013 Case-Shiller home price index, prices are up 22 percent year-over-year in Phoenix and Las Vegas and 21 percent in Atlanta, while they’re up around just 12 percent nationally. Home prices well outpace income growth in these areas. Meanwhile, no actual purchases by people who intend to live in the homes seem to account for the price gains in Las Vegas, for example; the number of primary residence purchasers is actually down from two years ago. This suggests a run-up in housing prices that is artificial, fueled by speculation from Wall Street investors, setting up the affected regions for yet another crash.

Needless to say, those with a vested interest in this scheme disagree. Blackstone, the hedge fund most deeply involved in rental purchases, with 29,000 homes in 13 metropolitan areas, completely denies any role in creating price spikes, arguing that the fund accounts for merely 0.4 percent of total home sales in the last year. But again, the problem is the proliferation in select markets, so national figures are somewhat irrelevant (in those markets, the percentage of purchases is exponentially higher, perhaps even a majority). Blackstone further believes it performs a valuable service in restoring blighted homes and finding families to occupy them.

But Blackstone doesn’t scoop up distressed homes out of good fellowship; they intend to make lots of money. And the meteoric rise in interest rates has played havoc with the strategy. Hedge funds like Blackstone typically pay cash for homes, so mortgage rates aren’t the problem. However, they do finance their deals by borrowing capital from large financial institutions like Deutsche Bank. The deals make sense because investors capture a “spread” between the low cost of borrowing from Wall Street and the high rate of return on rental revenue and home price appreciation (some predicted returns of 14 to 27 percent annually).

But suddenly, the cost of borrowing money has jumped at all levels, while at the same time, the proliferation of investors trying to rent out homes has depressed gains in rents. Because investors bought so quickly to stay ahead of competition, they have spent lots of time renovating and finding tenants, rather than collecting rental payments. Meanwhile, home prices have skyrocketed, increasing the initial investment. So what once was a can’t-miss deal now includes higher prices for home purchases, steeper costs to borrow the capital to make the purchases, and far lower rents, with increased competition leading to more vacancies. In this perfect storm, the investors can get far better returns elsewhere.

For this reason, investors who once rushed into the single-family rental market have just as quickly begun to rush out. Carrington Holdings, one of the bigger hedge funds in the space, decided to move on in late May. “We just don’t see the returns there that are adequate to incentivize us to continue to invest,” said CEO Bruce Rose, who also decried the “stupid money” that jumped into the market without a good strategy. Carrington is not alone. Multiple surveys show investor purchases slowing in the spring months, with fewer offers for distressed properties. Investors have tried to dump their properties by creating publicly traded real estate investment trusts (REITs), but they have drawn little interest, with some new REITs halting their initial public offerings.

This brings us to the critical question of how this reduction in investor demand, combined with soaring mortgage rates, will impact the housing market. Certainly, key markets where investor purchases dominated will see large fall-offs in demand, and prices should fall as well, or at least grow much more slowly. And since those markets outpaced national price increases, that could hurt the overall figures. Ending Wall Street speculation in housing before it got bigger could be a positive, but areas like Las Vegas and Phoenix do not need another housing collapse right now.

If you believe investor purchases are trivial, and that housing follows economic performance, then perhaps the market can sail through these challenges and continue to improve. But if you think investors have driven demand, and subsequently price increases, and that traditional homeowners won’t replace that shortfall; if you think that some investors will try to dump the properties they’ve already purchased because they cannot rent them, adding to supply; if you think that reductions in home affordability will push prospective buyers off the fence; if you think that just seeing home prices outpace rents alone indicates the return of a housing bubble, then you may just believe that the modest housing recovery is about to stall.

We will not know the precise outcome for a while, as housing data typically lags a couple of months behind. But the potential for a slowdown in what has been one of the main economic bright spots of the past 18 months ought to concern everyone. Ultimately, we’re about to find out just how durable this economy is; watch the housing data this fall for the answer.