This verdict allows every paranoid, sub-intelligent, vigilante with a gun to go on victimizing black youth 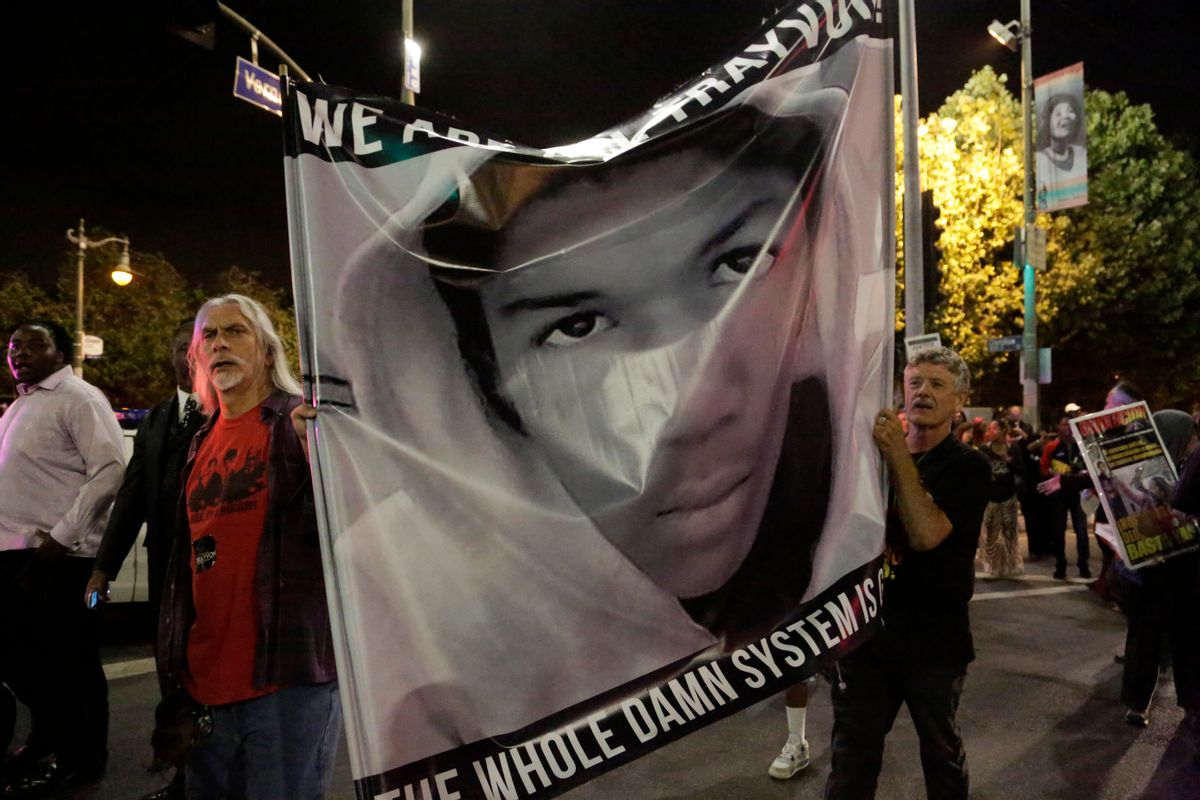 Just weeks ago, I returned to New York City from Fire Island on a Sunday evening, and decided to stop by my office.

After I let myself into the office, I noticed some Caucasians mingling around. I paid them no mind, since our office often has off-hours visitors who rent the common space.

“Can I help you?” said a middle aged white man, testily.

“Oh,” he said, stepping back slightly.  “I saw you and just wanted to make sure things are OK.”

“Thank you, George Zimmerman,” I said.

Weeks later, my sarcastic one-off is more painful to me than I could ever have imagined. George Zimmerman’s acquittal leaves me feeling so nauseous.

This office exchange has been common to me my whole life. A testy “Can I help you?” doubles as a passive-aggressive demand for me to justify my presence even where I belong. Thankfully, I have never encountered an armed white person on the other end of that presumption.

Trayvon Martin paid for that common presumption with his life.

Zimmerman’s stooges and apologists claim that his deadly encounter had nothing do with race. And that his trial and acquittal have nothing to do with race.  His defenders effectively portrayed him as a hapless Samaritan who got in over his head. Meanwhile, they tarred Trayvon as a menace who failed to properly justify his existence.

These presumptions colored every moment of the Police Department’s botched initial reaction and the trial.

How does an armed adult defy the policy, chase down a youth, kill him, and then turn around and call it self defense? Defense from what? A fleeing kid? Was Trayvon Martin seen for his humanity? Or as a “fucking punk”? Are black men seen for our humanity or as three-fifths of a fucking punk? This verdict will have devastating consequences. It is an implicit green light for every paranoid, sub-intelligent, vigilante racist to go on victimizing black youth. Trayvon Martin is dead for no reason other than being black.

Why do Zimmerman and some Americans feel entitled to police black and brown people like vigilantes? Why did the Sanford Police Department test a dead boy’s body for drugs in “standard operating procedure,” yet failed to test a live man’s body for alcohol or drugs? Why did the Sanford Police Department fail so miserably during the critical immediate hours after arriving on the scene?

Since our juridical Establishment often turns its head – or even winks – at the prevalence of racial profiling and police brutality against black and brown people, why should anyone be surprised by Zimmerman’s chase? Or by his acquittal? Implicitly and explicitly, the law condones his racial paranoia. The so-called rationales used to design and peddle “Stand Your Ground” laws and “Stop and Frisk” laws, and immigrant policing laws, fuel a vigilante mentality allowing some Americans to feel entitled to self-police others.

Even before the verdict, the Police Establishment warned black people not to riot – as though that were a foregone conclusion – without delivering Zimmerman’s supporters the same warning. The warning not to riot – in its substance and tone – recirculates the dogma of  “black men as menace.” The chase, the trial, the warnings not to riot, the acquittal all compound the passive-aggressive profiling of black and brown people.

This sordid affair has everything to do with race, but not race alone.

Not just a cautionary tale on racial profiling and vigilante justice, Trayvon’s needless death is a devastating lesson on the paranoid logic of gun capitalism. Zimmerman claims he didn’t feel safe. Did Trayvon feel safe? What about his safety? After all, the youth was shot by a multi-racial vigilante assailant – with a troubling history with law enforcement — in a multiracial gated community.

When will we muster the resolve to stop deaths from gun violence? For goodness sake: Why wouldn’t the Aurora shooting and the Newtown massacre force us all to confront the illusory sense of safety in our communities?

Regeneration Through Violence, The Fatal Environment, Gunfighter Nation: Richard Slotkin’s masterful historical trilogy on this country’s long-standing love affair with vigilantism, cruelty, and gun violence reveals as much about Zimmerman and this tragedy as does his trial transcripts – or any news media. This tragedy rips bare all the thorny issues Richard Slotkin exposes in that brilliant trilogy.

The questions demand: How does a legal establishment maintain justice in a world getting browner by the day? And in a nation that feels the need to "regenerate" itself through violence? What will this country do to keep young people safe?

Slotkin trilogy shows us how America’s frontier myths still dominate our violent politics and culture. So, in painful ways, the man who occupies the Oval Office, in all his blackness, is irrelevant.

From the highest levels of power designing our drone policy to the inept local trenches of Florida policing, we remain a gunfighter nation. From Trayvon to the kids in Newton, young people are vulnerable to mentally ill or paranoid or racist adults with guns. The acquittal is yet another frank reminder of who writes our laws, who enforces our laws, and the very presumptions guiding our laws.

Zimmerman’s acquittal is a blunt reality check about how power works in America.