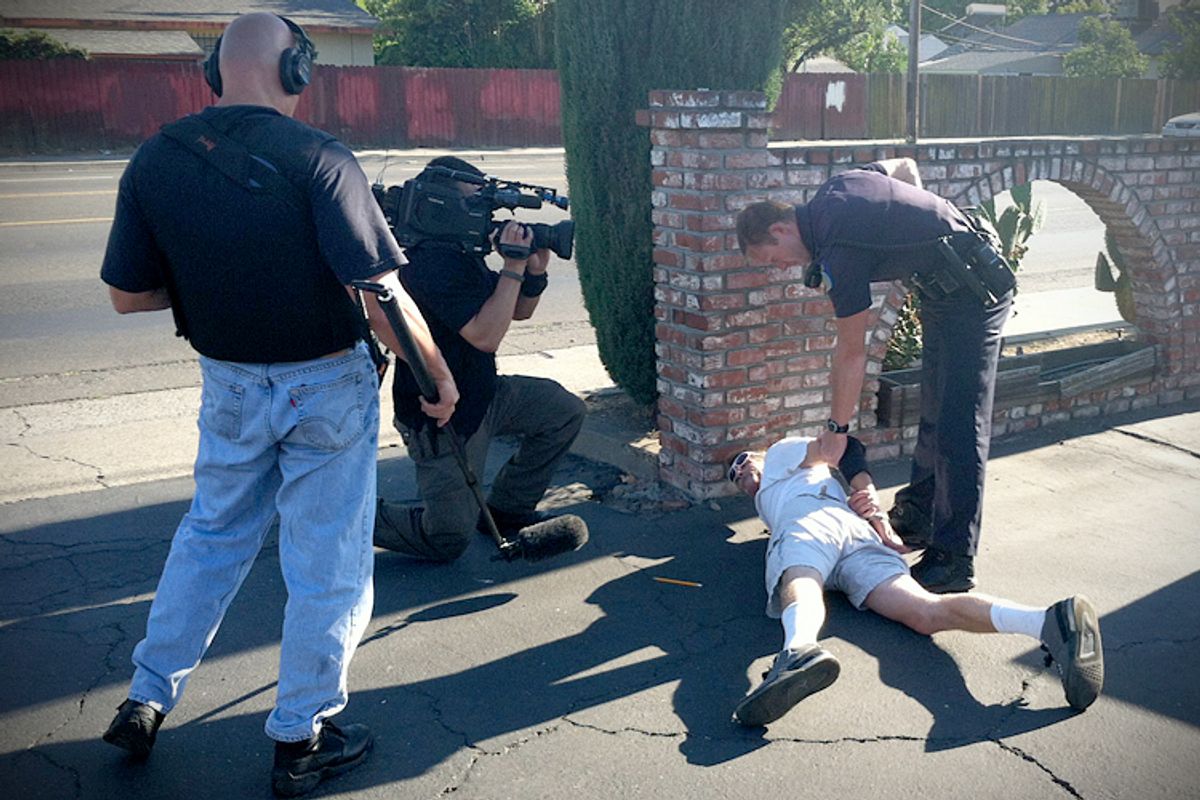 This is our third excerpt from Radley Balko's new book “Rise of the Warrior Cop: The Militarization of America’s Police Forces.” To read the first, "Why did you shoot me: I was reading a book," click here; to read the second, "Militarized police overreach: "Oh, God, I thought they were going to shoot me next,” click here.

"There's always a good time to use a Taser.”

So said Andrea, an attractive single mom and one of the four stars of the TLC reality show "The Police Women of Broward County," which debuted in 2009. In the trailer that included the Taser quip, the video then cut to the show’s stars tackling suspects, slamming knees into kidneys, pointing guns, and generally kicking ass. Judging from other clips on the TLC website, some of which featured shots of the female officers in bikinis, it seemed that the network couldn’t make up its mind whether these women were sexpots with handcuffs or girl cops who were just as rough and tough as the boys. A poster ad campaign for the show only reinforced the identity crisis. One read: “Taser Time.” Another: “Cavity Search, Anyone?”

Pop culture has always had a big influence on police culture, sometimes reflecting prevailing sentiment and sometimes driving it. In his chronicle of the 1970s "How We Got Here," conservative pundit David Frum argues that the decade’s parade of renegade cops who skirt the law but still abide by a familiar moral code (think Dirty Harry) reflected the prevailing opinion at the time that bad court decisions and criminal-coddling procedures were preventing well-meaning cops from getting the bad guys. Ed Burns, the former narcotics cop and co-creator of HBO’s "The Wire," thinks the influence might have been the other way around. In a 2008 interview, Burns said that the Gene Hackman movie "The French Connection" had a big influence on the culture of drug cops. “In The French Connection, [detective] Popeye Doyle had this very cynical, harsh, rough, law-breaking type of drug style that sort of set the tone in how street narcotics guys work. Very flippant. What the movie didn’t pick up, and what you didn’t see, is all the intense surveillance and hard work that would go into a drug bust back then. But they put out the idea of this guy who cracks heads, especially in that scene they went and they shook the bar down. That became iconic. And that is the way the cops were afterward. I mean, you’d see white cops in black neighborhoods looking like Serpico, and they’re not undercover. It was just this mind-set that took over of how you’re supposed to dress and act and the way you’re supposed to be.”

"The French Connection," it’s worth noting, came out in 1971. The series of botched ODALE raids in Collinsville and elsewhere began in 1973.

In the 1980s, the TV show "Miami Vice" nurtured the belief that south Florida was teeming with drug lords armed with more guns than most Third World armies, while "Hill Street Blues" offered the grittiest, most realistic portrayal of a big city police department yet aired on television. The show cast most of its cops in a sympathetic light, but, also took on issues like racism, corruption, and brutality.

For the better part of a generation, the Fox hit "Cops" was the only reality police show on TV. For twenty years, America watched as patient patrol officers broke up domestic disputes, arrested sunburned wife beaters, and chased petty drug offenders down darkened allies. Though the departments depicted in the show always had veto power over the footage that made it on the air, "Cops" generally did well to depict the monotonies of police work, be it walking a beat, calmly talking down a jealous husband, or driving a long, all-night neighborhood patrol in a squad car.

It was really the expansion of cable TV in the 1990s and 2000s that blew out the cop reality genre with shows that tended to emphasize confrontation and celebrate a culture of police militarism. A&E broke in first with "Dallas SWAT," which sent a camera crew with the city’s elite paramilitary police unit to document drug raids and standoffs. The show’s success spawned "Detroit SWAT" and "Kansas City SWAT." Court TV then jumped in with "Texas SWAT" and "SWAT U.S.A."

Testosterone-infused Spike TV joined the mix in 2008 with "DEA." Produced by jolly weatherman-cum-drug warrior Al Roker, the first season followed a group of federal agents, also in Detroit (the city’s crumbling badlands provide great backdrop for reality shows), as they planned and carried out drug raids. (It also produced an unintentionally hilarious moment when self-proclaimed pot smoker and legalization advocate Joe Rogan was forced to conduct a reverent, promotional interview with one of the show’s drug-agent stars while hosting one of Spike’s mixed martial arts events.)

The obvious criticism of such shows is their exploitation and general tackiness. Not that anyone expects much dignity from most of the cable networks, but you’d think, for example, that the Broward County Sheriff’s Department might object to the sexualization of its female officers, or to a national ad campaign insinuating that they’re sporting itchy Taser fingers.

But these shows may have a more sinister effect. In emphasizing the more aggressive, confrontational aspect of police work over community service—hurting people instead of helping people—they may be shifting the profile of the typical young person attracted to police work. Browse the dozens of police recruitment videos on YouTube, for example, and you’ll find that many of them feature images of cops tackling suspects, rappelling out of helicopters, shooting guns, kicking down doors, and siccing dogs on people. The images are often set to blaring guitars or heavy metal music. These are the videos that police departments send to high schools and colleges to attract new recruits. At the very first step in the process of staffing their departments, then, these agencies are deliberately appealing to people who are likely to be lured by the thrill-seeking, adrenaline-producing, butt-kicking aspects of law enforcement. Build an entire police force of people who fit that description and you have a force of cops who seek confrontation instead of avoiding it and who look to escalate volatile situations instead of resolving them peacefully. These are the sort of cops who volunteer for the SWAT team for the very reasons they should be excluded from it—cops like the two Maricopa County SWAT officers who talked to CBS News reporter Jim Stewart in 1997. The best part of being on the SWAT team, one of the officers said, was that “you get to play with a lot of guns. That’s what’s fun. You know, everybody on this team is—you know, loves guns.” The second cop then chimed in. “Hey, the bottom line is it’s friggin’ fun, man. That’s the deal. Nobody wants to take burglary reports.”

Even the wrong-door raid has become well established in pop culture. The first depiction of one I could find on network television was in a 1990 episode of the NBC drama "LA Law." But it’s become more common in the last decade or so. In one episode of "The Simpsons," Chief Wiggum mistakenly raids the home of Reverend Lovejoy in search of a cattle rustler. The shot then pans down the street to show loose cattle grazing in the front yard of Springfield’s well-known career criminal. One particularly pointed skit on Comedy Central’s "Chapelle’s Show" depicted the discrepancy between police raids on white people suspected of white-collar crimes and black people suspected of drug crimes. In the skit, a white CEO is subjected to a drug raid in which the cops set off a flash grenade, shoot the man’s dog, sexually assault his wife, and beat him as they yell at him to “stop resisting.” Coming full circle, in 2009 a viral video posing as an ad for a search engine parodied the SWAT reality shows by following “Fresno SWAT” as they mistakenly raid a day care center, a family eating dinner, and an elderly couple. It ends with the statement: “Imagine if dispatch gave out as much bad information as search engines do.”

And so here we are. The wrong-door raid has now been normalized to the point where it can be parodied in a viral Internet commercial for a search engine.

Excerpted from “Rise of the Warrior Cop: The Militarization of America’s Police Forces” by Radley Balko. Reprinted with permission from PublicAffairs Books.

Radley Balko is an award-winning investigative journalist who writes about civil liberties, police and prosecutors, and the broader criminal justice system. He is currently a senior writer and investigative reporter for the Huffington Post.