SyFy's movie chief: "Sharknado" buzz was "one of those magical things that happen"

Thomas Vitale on the ways that the social-media hit, whose ratings were soft, can still help build network profile 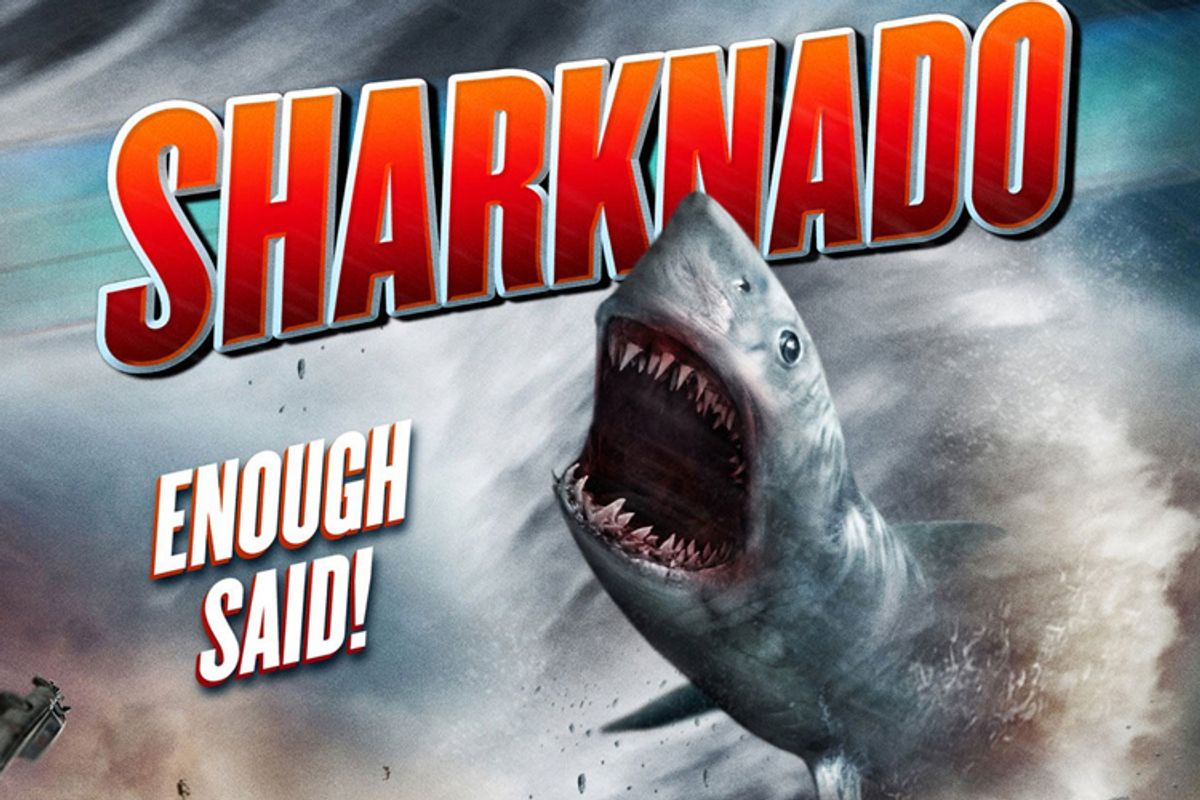 Few recent TV events -- leaving aside the Super Bowl and the Academy Awards -- have generated as much heat online as "Sharknado," the TV movie that took Twitter by storm on Thursday night. By the time Mia Farrow weighed in, everyone but Hannah's sisters seemed to have been sucked into the Tara Reid vehicle with the self-explanatory title.

And yet cable network SyFy (rebranded in 2009 from its stodgy Sci Fi roots) saw not much of a ratings boost from its wild night of carnivorous fish flying through air. With fewer than 1 million viewers, the movie was below even the average for SyFy's movie offerings.

And yet SyFy brass profess to be unworried. In an interview, Thomas Vitale, the executive vice president of programming and original movies for the network, described the strategy underpinning "Sharknado" -- reverse-engineering the sort of spectacle that would draw in attention and build brand awareness, regardless of a single night's ratings. While every network cares about ratings to some degree, Vitale described a splintered media landscape in which SyFy -- still working to build awareness after its rebrand -- must fight to bring in new viewers to its offerings nightly. Ratings aside, Vitale said, "Sharknado" is a boon for the network's movie franchise and the network itself; what follows is a look at what a social-media hit can and cannot do for a basic-cable network.

You produce so many movies a year -- and yet I don't often hear about them on Twitter. What made this one break out on social media?

We do have 24 movies a year, and the movies have all different flavors, if you will. We do the over-the-top campy ones. We've had a string of movies with the thing in the title that gets people to take notice: "Mansquito," "Dinocroc," "Sharktopus." We do two or three movies a year where it's really in the title. Then we also do horror movies in October, we've done sword-and-sorcery fantasy, mythological movies -- Odysseus, Hercules -- and traditional sci-fi. We did a movie called "Monster Ark," about Noah's first mission rounding up the monsters and sinking them in a boat before he kept two of every animal. At the time, many years ago,  people didn't realize it was just a movie and were wondering if they found another ark. When "Mansquito" came out, we got written up in print magazines. Everything was smaller then, and there was not much of an online presence for entertainment news. There wasn't Twitter, Facebook wasn't what it is now. Even with "Sharktopus," social media hadn't taken off much yet. Now, social media has grown so big that what we've done has been discovered in a wide way.

But why this one? Social media has been around for the last several SyFy releases, if not more.

I think it happened mostly organically -- though we do put a big press effort on the movies we know are good. We talk to our friends in the press and let them know what's coming. This movie got heat when the production company, which has international distribution rights, took this to the Cannes Film Market. When the poster went out, it immediately started going viral. I was getting emails from friends. We knew it was fun, knew it worked, knew it had a great cast. When you do 24 films a year, you know some are better than others.

How much does all the buzz help you, though, if the ratings are soft?

Think about how many networks are out there. You personally probably have a dozen websites and seven or eight networks. You have your favorite 10 or 12. How much time do you have in life? If we can become part of the conversation, and be a network people check out, we'll be a long-lasting network. To be on "NBC Nightly News," "Nightline," mentioned on "Extra" and "Access Hollywood" and "Leno" and "Kimmel," "Today" and "Good Morning America," to have websites like yours talking about us. Think about all the viewers we're reaching. It's not specifically about the ratings for that night. The thing about running a business like SyFy is that we want to maximize interest over the long-term. Original movies are one part of what we do -- we have series and miniseries, like "Defiance," that are very serious. But the movies are about putting your feet up and just relaxing. The social engagement told us that some viewers have not checked us out -- and now they have checked us out, and seen that we're a fun place.

It's funny, because I remember SyFy projects like the miniseries "Tin Man," which was nominated for several Emmys after it aired in 2007 (when the network was called Sci Fi); that's worlds away from "Sharknado," to the degree that they don't even seem like the product of the same network. Do you worry about your viewers getting whiplash?

We're still doing big miniseries and planning them. But the one-off television movies are the more escapist fare. They're escapist movies, meant to provide escapist entertainment.

In the very early days of doing these movies, for the first year or two, I don't think the viewers -- definitely the critics didn't -- got that we were in on the joke. They were not sure if we had tried to make a serious piece. But we do serious series and miniseries, and the movies are for fun! A lot of people were saying -- they really didn't get it. It was the work of our press team in our early days that got viewers to understand what we were doing. then the movies really took off. Viewers finally know that we know that they know.

Look at the genre of science fiction, fantasy and supernatural -- and that's why we changed our name, because the network is about more than just science fiction, it's about the broader imaginative genres -- and look at those genres, look at that section of the bookstore. You have assorted sorcery next to space-age sci-fi next to urban fantasy next to supernatural stuff, time travel, alternative history. The genre we cover has so many flavors. Scary and serious like "The X-Files" -- talking about other people's programs now -- but also you have "Red Dwarf" or "Doctor Who," which is quality science-fiction but popular science-fiction. "Alien" is as much a horror movie as a science-fiction movie.

That's why our brand slogan is "Imagine Greater." What we really are about is the imagination -- not just about space and aliens. We love space, love aliens, love all these other pieces. That's the license you get when you do imaginative, wide-ranging genres like ours. Viewers like that. I don't think there are many science-fiction viewers or television viewers who only watch one thing. You probably watch sitcoms and reality and drama. That's how we fit shows like "Face Off" or "Ghost Hunters" under the umbrella.

Is there any possibility that you'll have a "Sharknado"-level social hit consistently?

No one here expects us to catch lightning in a bottle on a regular basis. It's one of those magical things that happen. It's a matter of being a consistent network that provides viewers what they want to see. It's about consistency. So many people are focused on these things here. The most challenging (but the most fun) thing is filling 24 hours a day. We just want to bring people here so they see all the great things that are ongoing, as we're planning for the next one and the next one and the next one.