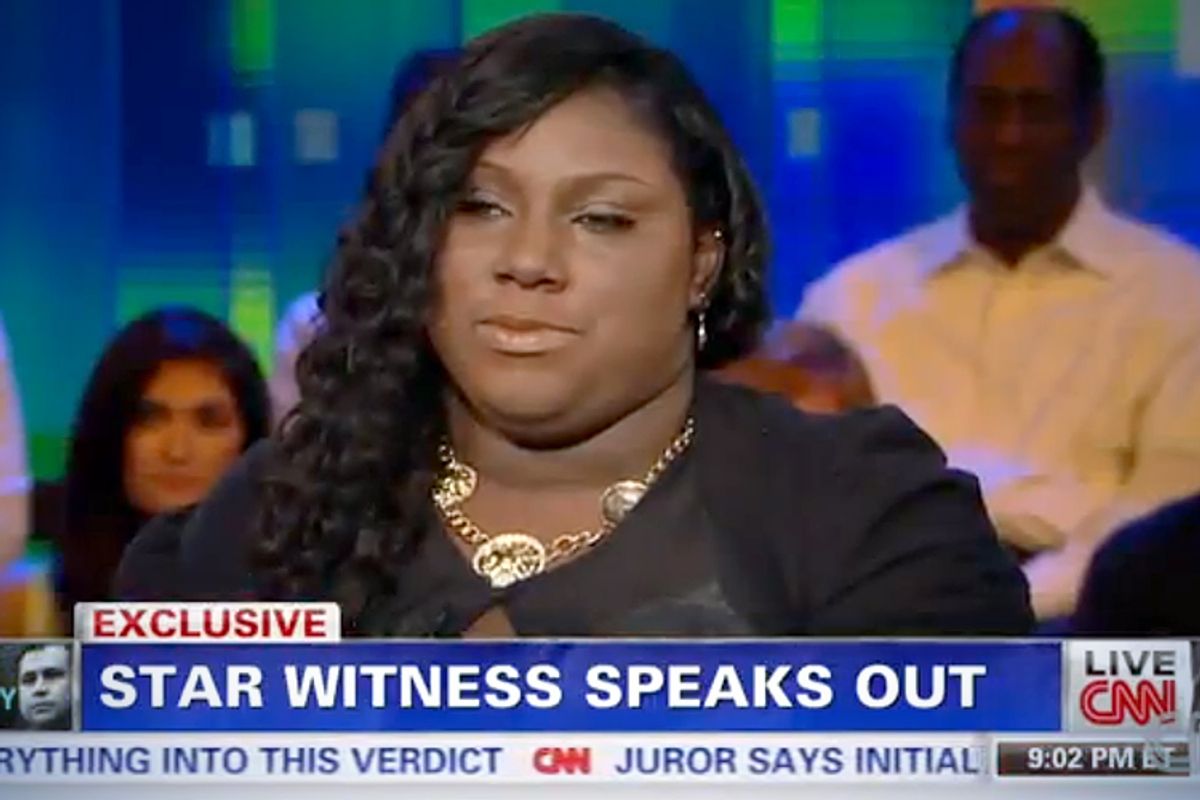 It's not even close to justice, but at least it's one less thing to be enraged about today. George Zimmerman trial juror B-37 will not, in fact, be cashing in on the death of a teenage boy and shopping around for a book deal. So there's that.

On Monday, literary agent Sharlene Martin, who has represented Raffaele Sollecito's "Honor Bound: My Journey to Hell and Back With Amanda Knox," MaryJo Buttafuocco's "Getting It Through My Thick Skull" and Ron Goldman's family's "If I Did It: Confessions of the Killer," announced she had signed the anonymous juror and her attorney husband to "begin working on a book proposal and submitting it to interested publishers." Seemed like a perfect fit, right? And that evening, B-37 herself, in her apparent first step toward literary stardom, sat down – albeit in deep shadow – with CNN's Anderson Cooper.

It was not surprising that a member of the team that acquitted Zimmerman of the murder of Trayvon Martin should display a belief that Zimmerman's actions were justified. Nevertheless, B-37's steadfast assertion that "I think both were responsible" for what happened on the night of Feb. 26, 2012, and her simultaneous declaration that "I feel sorry for both of them" somehow still felt shocking. As did her qualified response that she would trust Zimmerman on a neighborhood watch "If he didn’t go too far."

Juror B-37 is a middle-aged white woman with two adult children. She is the daughter of an Air Force captain and the wife of a lawyer. She reportedly does volunteer work with animal rescue groups. From her appearance with Cooper, she seems like a well-spoken person who sincerely made a go of doing her best – her voice cracked as she described how all the jurors wept as they handed their verdict to the bailiff. "It was just hard, thinking that somebody lost their life and there's nothing else could be done about it," she said. "It's sad, it's a tragedy. But it happened ... It's very emotional." And yet, in her assertion that she also felt "sorry" for Rachel Jeantel, whom she surmised "felt inadequate … because of her education and her communication skills," she also revealed a woman whose understanding is profoundly limited by her advantages. A woman whose different "education" and "communication skills" might indeed make it easy for any bloodthirsty publisher to turn her experience into a true crime bestseller – certainly easier than it would be for the much-mocked and scorned Rachel Jeantel, who does not appear to be fending off literary agents right now.

And then social media got into the mix. As Uproxx notes, it was tweeter Genie Lauren, who goes by @moreandagain – or more familiarly, Cocky McSwagsalot – who inexhaustibly took up the cause Monday. Fueled by frustration, she encouraged tweeters to "flood Sharlene Martin's phone, email and snail mail" with cries to drop her new client. She posted a change.org petition that swiftly exceeded its goal of a thousand signatures. She was relentless, and she quickly drew supporters.

Then, in a swift about-face, juror B-37 changed her mind. Late Monday night, she issued a statement via Sharlene Martin. In it, she acknowledged that her recent "isolation shielded me from the depth of pain that exists among the general public over every aspect of this case … Now that I am returned to my family and to society in general, I have realized that the best direction for me to go is away from writing any sort of book and return instead to my life as it was before I was called to sit on this jury."

B-37 may have been legitimately concerned that a book would all but surely expose her identity and put her privacy and safety in jeopardy. She may have been motivated entirely by self-preservation. And her retreat certainly doesn't spell the end of the Trayvon Martin industry – there will be other deals to be made, other stories to be sold off. And none of it changes the fact that a kid is still dead, that parents still grieve for a son lost. But what unfolded so quickly on Monday – from a potential profit off senseless death to a very public shaming that led to a change of heart – shows that sometimes our outrage really does have a positive effect. It's not quite a victory. But it's one less heartache.