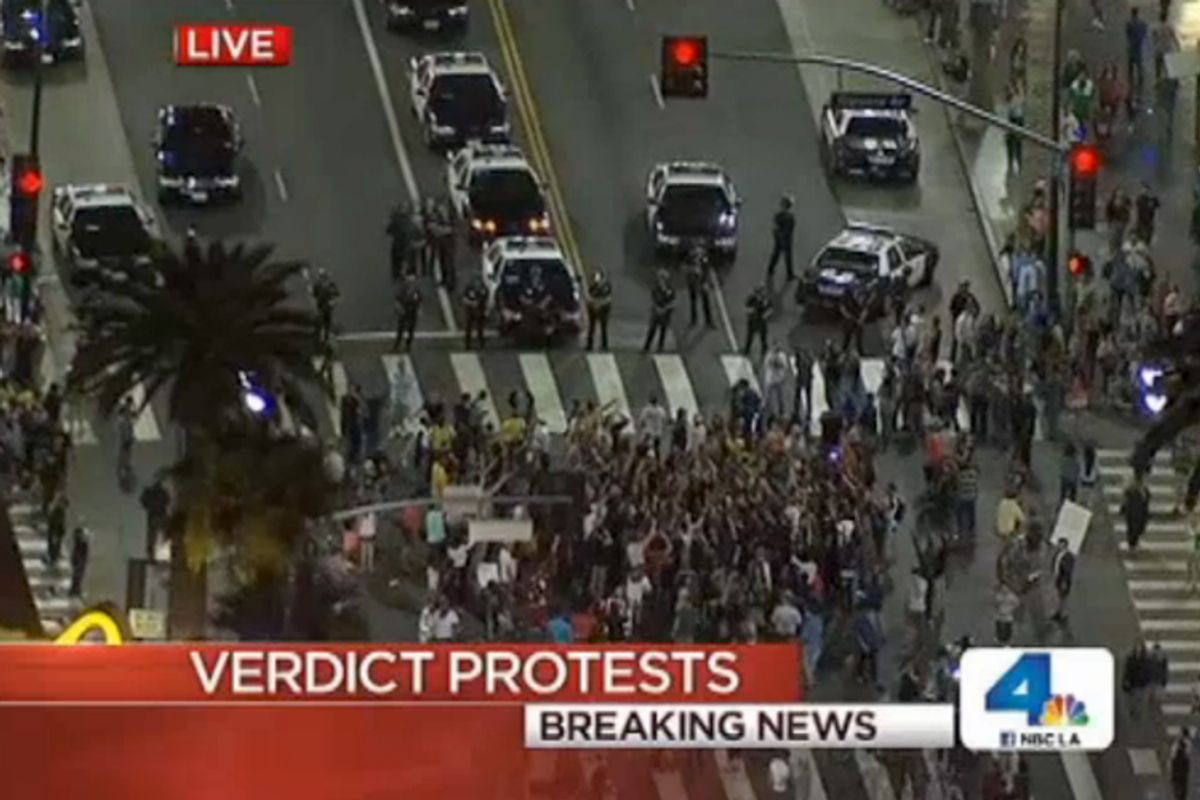 Despite reporting to the contrary from both Los Angeles' NBC affiliate and the Los Angeles Police Department, Trayvon Martin protesters in Hollywood on Sunday night neither "stormed" nor caused "about $15,000 worth of damage" at a local hotel.

For the most part, protests in the wake of the "not guilty" verdict for George Zimmerman in Florida, have been peaceful here in L.A., though, at times, it seems as if NBC's local affiliate, NBC4 hoped they might not be.

The BRAD BLOG has confirmed with a spokesman at the W Hotel in Hollywood that "no protestors ever entered" the facility, even as NBC4's NewsChopper4 reporter Megan Reyes told both the studio and viewers watching their live web stream of protests on Sunday night that protesters were "getting very rowdy" and had "broken glass" at the hotel. She cited no source for her reporting, and NBC4 did not respond to The BRAD BLOG's request last night via Twitter for detailed on Reyes' sourcing.

By Monday on NBC4, false reports of "broken glass" had turned into false reports of "$15,000 worth of damage" at the hotel, after reporter Tony Guinyard informed viewers that protesters "stormed" the hotel and, as as an LAPD Commander, on camera, confirmed that report.

All of that, however, was completely disputed by two W Hotel officials we contacted on Monday...

"At one point," Smith says in the report (see beginning at appx 1:10 in the video here), "a group broke of them broke off and went into the W Hotel, committed what I'm told is about $15,000 worth of damage. Spray-paint, graffiti, that type of thing, and then they left."

"Those were some of the individuals we arrested later that were part of that group," Smith continued. "We have a total of 5 people that were arrested in Hollywood for failure to disperse from an unlawful assembly. And now I'm getting reports that one more person was arrested for throwing bottles at our officers in Hollywood as well."

The account from the W Hotel's PR and Communication Director Lauren Travis and its General Manager Leon Young, were quite different from NBC4 reporters Guinyard and Reyes, as well as that of LAPD's Commander Smith.

"The safety and security of our guests and associates remains our paramount priority," Young told The BRAD BLOG in an emailed statement forwarded to us by Travis today, "and we are thankful to the local authorities for their assistance."

Young went on to make clear that "No protestors ever entered W Hollywood nor were any of our guests ever in danger."

In our follow-up, specifically asking about the reports of broken glass on Sunday, as reported several times late Sunday night by NewsChopper4 reporter Reyes, Travis replied directly: "Regarding the broken glass - those reports are false."

We sought comment from NBC4, asking if they intended to correct the record, given the response from the hotel. After sending an email query, we received a phone call almost immediately in return Monday evening from Andy Davis of NBC4. He requested our conversation stay off record, but he pointed us towards the video posted on their website of Commander Smith claiming the major damage at the W Hotel.

We then sought comment from the LAPD's Media Relations Section and spoke with Detective Gus Villanueva. When we asked about the discrepancy between Smith's comments on NBC4 and that from the W Hotel officials, he said, "I would go by what the hotel says."

Villanueva confirmed, in fact, that "Initially, we heard it was $15,000. I know that's what I have as of 3pm. I haven't heard anything different since then."

But when we asked who the source was for that report, he said, "Obviously, the hotel would be the source for that."

"I know we did give a property damage estimate," he added, "but I would go with what the hotel says."

"Will you be correcting the record on that then?," we asked.

"No, but you will," Villanueva responded.

And so we have. We hope NBC4 issues a retraction for both its inaccurate Monday report featuring the false remarks by Commander Smith and reporter Guinyard, as well as for its late Sunday coverage by NewsChopper4 reporter Reyes, who seemed to be almost hoping for violence to break out as the evening went on.

Reyes' repeated reports of "the situation growing more tense by the minute", "beginning to get rowdy now", "taking a sudden and dramatic turn", "protesters were breaking glass at the W Hotel in Hollywood," appear to all be false, according to the very same video feed that she was reporting on over a live line back to her studio.

At the time of Reyes' reporting, there had been only one arrest across all of Los Angeles after an entire day of spotty protests across the entire city. Only long after she announced the chopper was low on fuel and would be ending its coverage just after midnight, there were reports of a few scattered arrests late night in Hollywood.

* * *
At the height of the Occupy Wall Street movement in late 2011, the Oakland PD's Interim Police Chief Howard Jordan told the media, after a particularly violent confrontation with protesters, that officers "had to deploy gas in order to stop the crowd and people from pelting us with bottles and rocks."

The media reported Jordan's remarks verbatim and largely uncritically after an evening of chaos had erupted on the streets of Oakland. A forensic investigation by The BRAD BLOG at the time, however, examining video available from the scene that night, revealed that it was, in fact, the OPD who began the confrontation with protesters. Police had begun firing chemical weapons into the crowd, which almost resulted in the death of two-tour Iraq War vet Scott Olsen. He suffered serious brain damage after his skull was cracked open by a tear gas canister recklessly fired by officers into the crowd of peaceful protesters.

The OPD eventually walked back Jordan's claim days later, after we pressed them for evidence to support the Chief's assertion that protesters had kicked off the riot. Oakland PD Chief of Staff, Sgt. Chris Bolton downplayed Jordan's remarks as "the Chief's preliminary belief."

By then, however, the damage had been done, and both the public, and police opinion had begun to harden against the protesters. The protesters, in turn, had been hardened against the police as well, and became less likely to cooperate with orders to disperse.Others were injured by the Oakland police during subsequent melees, and even citizen journalists were openly fired upon by cops there as the tension grew over the next several days and weeks.

Getting these stories right, particularly when political tensions are very high, should be paramount for both media and police officials. Instead, too often, it seems, mainstream corporate media simply accept the account of officials and report it verbatim without bothering to investigate any further or ask for evidence to support police claims. Getting it right matters.

Advertisement:
* * *
Too often, nonetheless, it seems the media is rooting for trouble. That appeared to be the case, once again, on NBC4, when reporter Tena Ezzeddine opened Sunday's 11pm broadcast, after a day of almost entirely peaceful protests, with dramatic tones.

"Trouble brewing and nightfall was on the horizon...With the dark came danger. LAPD with riot gear, the masses gathering...chanting...seeking solace...anyway...they can get it," Ezzeddine breathlessly told viewers before rolling her pre-taped package...

After the package --- which showed no violence by protesters --- NBC4's Ezzeddine returned, in more breathless tones..."back now live. The city, LAPD is on a city-wide tactical alert, meaning most every officer will remain on the job until they can ensure there is peace on the streets."

"A lot of that help," she continued --- while the live shot shows an almost entirely empty street in the Crenshaw District, with no one visible other than an apparently homeless man walking slowly down the street, dragging a piece of luggage behind him --- "coming in the form of backup from the LA County's Sheriffs department, that you can see in our live picture. They are blocking the entrance to the Metro, trying to ensure that no people can go into the Metro and cause any problems."

The live shot, however, revealed there was nobody there even interested in going into the Metro. Ezzeddine then went on to explain that she had spoken to LAPD "only seconds ago", and could confirm only one arrest (again, after an entire day of protests which were almost entirely peaceful) --- and, "so far, no officers injured."

Well, that's lucky. Good thing the officers didn't accidentally hit themselves in the face with the batons they are seen in Ezzedine's report swinging wildly at protesters.

Notice, the only violence seen in NBC4's video report above is the LAPD swinging at protesters with batons and the evidence of protesters being shot by police with rubber bullets.

But late last night, and again today, it was "$15,000 worth of damage" caused by protesters at a hotel, despite the hotel disavowing any such damage, or even the presence of protesters inside the hotel at all.

Many retractions and apologies are due.