Can you be a feminist and visit prostitutes?

Eliot Spitzer says he's a feminist -- does his history of patronizing (and prosecuting) sex workers disqualify him? 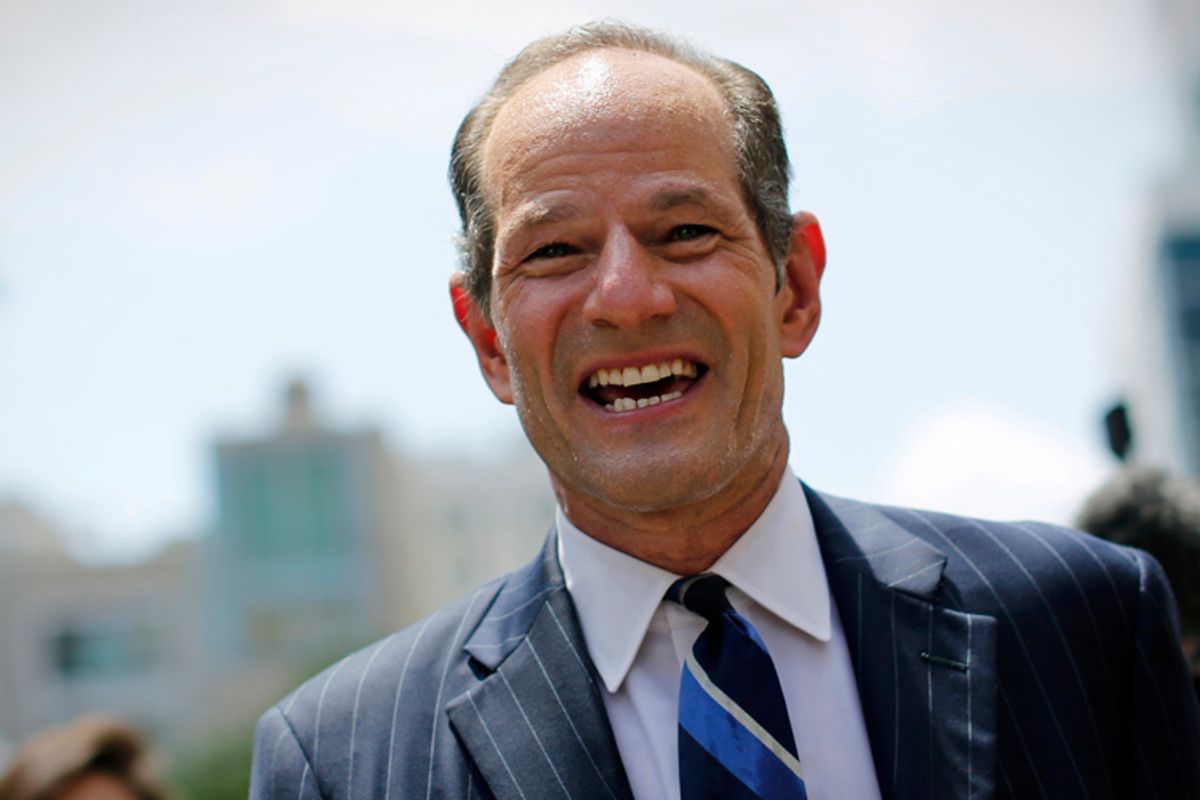 Susan Sarandon says she isn't one.  Nor are Katy Perry or Carla Bruni or Marissa Mayer. Beyonce says she is – but with reservations. In fact, if you're looking for a public figure willing to declare an unqualified feminism, the list is pretty short. There's Zooey Deschanel. And there's Eliot Spitzer.

The former governor of New York -- who resigned from office five years ago in the wake of revelations about his escort service patronage -- recently announced his intention to run for New York city comptroller. He is currently neck and neck with other noted ladies' man Anthony Weiner in a recent poll. But on Tuesday's "All In With Chris Hayes," Hayes confronted Spitzer on his complicated history with women, playing a clip of NOW New York president Sonia Ossorio asking, "Do we want an elected official who has broken the law, and has participated in sustaining an industry that has a history of exploiting women and girls?"

Yet when Hayes asked him point blank if he was a feminist, Spitzer didn't blink. "Yes," he said, adding, "I hate to hide behind the line, 'Life is complicated.' What I’ve said to the voters is, 'Look at the totality of my record.' I’ve been forthright and direct. I resigned five years ago and done a great deal between now and then… The record I had was one of devout dedication to women’s rights, on the issues of choice and the issues of equal pay or issues of anti-discrimination, both as attorney general where we were fervent in pursuing those cases; [and] where we were fervent in governing and legislation."

Spitzer's right – about his record and about life being complicated. Before his career went off the rails, he was a strong supporter of reproductive choice, working with NARAL and declaring New York "a beacon of civil rights and protection of women’s rights." He's been supportive of pay equity and marriage equality. He's put state funding into childcare facilities. If you didn't know that he'd blown up to $80,000 on prostitutes and allegedly "would ask you to do things that... you might not think were safe," his feminism would seem today for all the world like a no-brainer. That he would go the extra mile and unhesitatingly answer to the word, a word that usually comes tucked within the phrase "I'm not a" and "but," would be a triumph.

But we do know about Spitzer, aka Client 9, and his escort habit. We also know that he enthusiastically went after at least two alleged prostitution rings, saying its "owners and operators will be held accountable," with a moral fervor that smacks now of hypocrisy. So, the illegality of his actions aside, what's the feminist weight of them? Can you be an escort client and a feminist? Is Ossorio justified in calling Spitzer out for "sustaining an industry" of sex for sale?

To say that Ossorio is correct in her stance assumes that prostitution and feminism are diametrically opposed – a concept that many of us who call ourselves feminists would disagree vehemently with. It's too simplistic and lazy to assume that sex work automatically conflicts with The Cause, without considering individual circumstances and stories in their context. But when you do look at Spitzer's history in context, the deeper feminist question isn't about what he notoriously did with Ashley Dupre -- the former escort who says she was simply "doing my job." It's about his inconsistent track record on sex workers. As a colleague notes, "I think you can most definitely be a feminist and patronize prostitutes. But you can't be a feminist and prosecute prostitutes, which is what he did when in office. I have less of a problem with him paying for sex than I do with him aggressively enforcing anti-prostitution laws while doing it." And Spitzer's self-stated feminism needs to be further viewed in terms of how he's actually treated women – another colleague asks, "Do you get to call yourself a feminist if you serially cheat on your wife?" Does a man who has true feminist cred commit adultery on such an epic scale, with women he paid for sex?

Ultimately, what feminism is remains up to the individual to define, and to then go out and put into practice. That's why what Hayes' question illuminated best was how unique the question is, how rarely men are even asked about it. And though he proves that personal behavior doesn't always jibe with political action, I'm still glad when any man goes ahead and calls himself a feminist, without hesitation. Even a man with a track record like Spitzer.