Carrying a gun is a legitimate response to America's craziness

Here's how sick gun culture is: If black men feel they have to arm themselves against vigilantes, they may be right 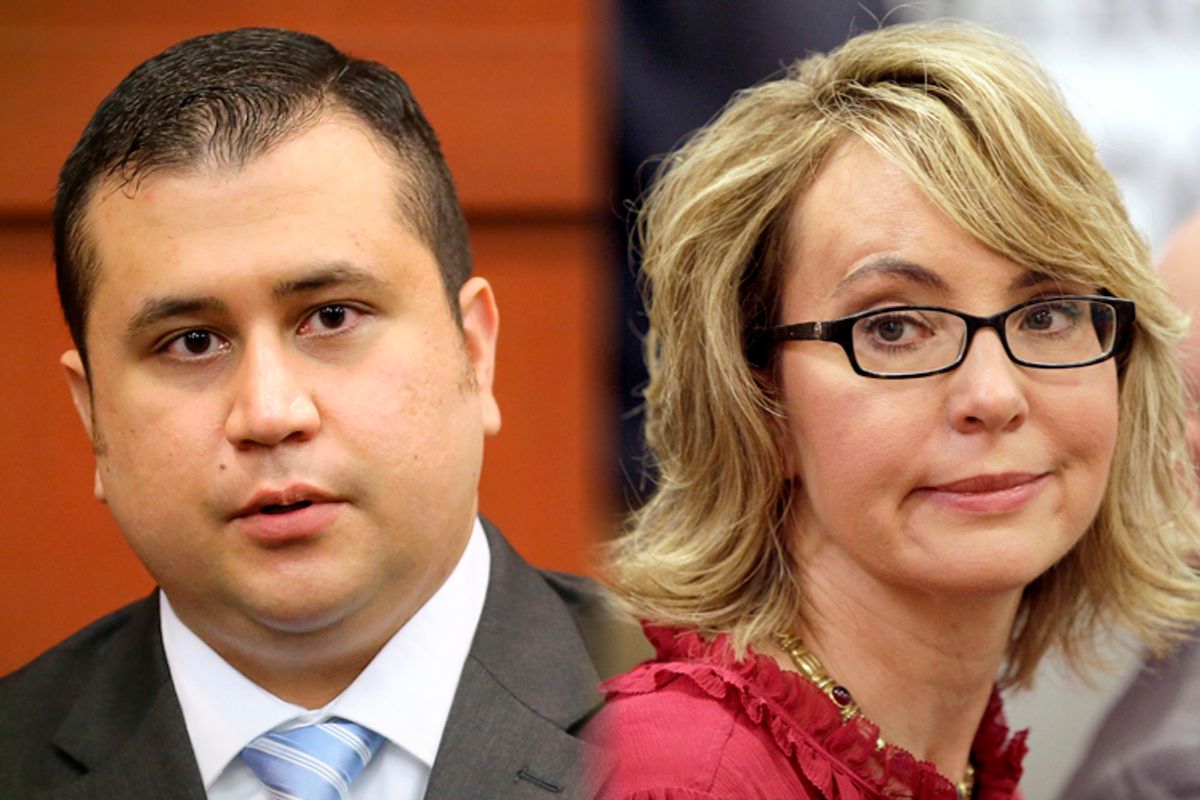 In a ghoulish and almost comical footnote to a traumatic summer weekend in America, many of us in the media received an email on Monday from the office of former congresswoman Gabrielle Giffords and her husband, the retired astronaut and Navy captain Mark Kelly. “Gabby fired a gun for the first time since Tucson,” the subject line announced. Oh, good! In a blow for responsible gun ownership, or maybe just for painful historical irony, the victim of one of the most famous shootings in recent American life is ready to pack heat again, just as the perpetrator of another, George Zimmerman, gets his own gun back. If they ever meet in person, at least Giffords will have better odds than Trayvon Martin did.

No, that's not funny. But I’m not trying to be funny. I'm suggesting that if liberal female legislators from red states, and African-Americans who go out at night in neighborhood-watch communities, and lesbian, gay or transgender people in conservative small towns, decide to arm themselves in self-defense, that's a legitimate response to a crazy situation, and we don't have the right to get high-minded about it.

There’s no obvious connection between the Florida encounter that led to Zimmerman shooting Trayvon Martin and the January 2011 attack, outside a suburban Arizona supermarket, in which Jared Lee Loughner shot Giffords in the head (and shot a bunch of other people too). None, that is, except for the glaringly obvious fact that if we could find a way to keep lethal firearms out of the hands of delusional anti-government obsessives and self-appointed neighborhood watchdogs, neither one would have happened. Giffords, Loughner, Zimmerman and Martin are all avatars in America’s most widespread religion, the cult of the gun. One is dead, one will suffer the effects of a devastating brain injury for the rest of her life, another will spend his life in prison and George Zimmerman is at home watching “Big Brother.”

Listen, NRA trolls: Save your self-righteous emails about liberty and your dumbass interpretations of the Second Amendment for someone else. I’m not here to take away your cache of assault weapons, your cans of Spam or your camo pants. Restricting access to dangerous weapons in some reasonable fashion – as opposed to pretty much removing all limits and regulations on gun ownership -- would have been the rational response, of course. But you people are living proof that we don’t live in a rational country.

I mean it. How many times do we have to have the same stupid conversation about guns – after every school shooting, post-office massacre or attempted assassination -- while elected officials shift uneasily in their loafers and gun lobbyists stand in the corner giggling into their $18 designer cocktails, before we realize that there’s no point? On this subject (and quite a few others), evil people with lots of money have the whole country in a chokehold. George Orwell imagined the future as a boot stamping on a human face forever, but he didn’t quite imagine that a large proportion of the population could be induced to beg for more vigorous stamping in order to prove their devotion to freedom.

So I say Lord love the well-informed liberal activists who are willing to wade into the gun-control debate one more time, armed with logic and statistics: Easy availability of handguns and assault weapons enables the high murder rate characteristic of our beloved homeland, and most Americans would be totally fine with tighter federal regulations. (I realize, by the way, that that’s where Gabby Giffords’ actual position lies, and that her gun-shootin’ press release was a P.R. maneuver.) But I’m done with it. If you believe actual logic applies in the United States of America, as opposed to the bizarro-world logic of dreams and action movies, you haven’t been paying attention.

I’m here to say that given our sick and deranged society, Giffords’ decision to pick up a gun two years after getting shot in the head and suffering a massive brain injury makes perfect symbolic sense, and maybe literal sense too. We are a nation awash with guns, a people who love guns more than we love cars or children. Why should angry white men get them all? Most black people are too sensible to say this stuff out loud, but I guarantee you more than one African-American parent has had this thought in private: If Trayvon Martin had been armed the way George Zimmerman was – and the way that Scary Young Black Men are presumed to be -- he might be alive today.

No, I know – it’s not a wholesome thought, and most parents who’ve had it tried to squelch it immediately. Many police departments still target young black men with stop-and-frisk policies, based on the presumption that they're armed and up to no good. Even an African-American carrying a legal, registered weapon is likely to wind up in jail overnight while the situation gets sorted out. Furthermore, black neighborhoods suffer from the effects of gun violence far more than white neighborhoods do. (Your odds of violent death are six or seven times higher if you're black than if you're white.) Even with violent crime at or near historic lows, young black men die every night in every major city, sometimes at the hands of other young men and sometimes at the hands of the police. As African-Americans know all too well, if a young black man in a hoodie with Skittles and a soda bottle is a threatening specter whose death can be considered an understandable mistake, a young black man with an actual weapon is a nightmare too horrible to think about, subject to summary execution. A white man with a gun, even one as evidently disturbed and confused as George Zimmerman, is intuitively understood as John Wayne or Clint Eastwood, a defender of the innocent and seeker of justice. A black man with a gun is a thug, a pimp, a drug lord or an armed revolutionary planning rape and pillage.

But Trayvon Martin went out to the 7-Eleven without a gun or any other kind of weapon, committing no crime during his journey, and still wound up coming home in a box. From his family’s point of view, there is no worst-case scenario that’s worse than that. We hear all kinds of excuses and explanations -- in the comments section of this article, no doubt -- about how this is just a story of two individuals and not another American moment of racial reckoning, and how Trayvon was no angel but a kid who may have shoplifted jewelry or struck gangster poses on Facebook (the penalty for those things being death, apparently), and how the jury in Sanford made the correct decision under Florida’s laws, which can pretty much be used to justify shooting anyone who strikes you as kind of scary. All of which may be true, up to a point, and also deliberately misses the larger meaning of this event.

As the father of two American children blessed with the enormous social and cultural advantage of white skin, I share David Simon’s feeling that I can’t look parents of black children in the eye this week without “thinking about what they must tell their sons about what can happen to them on the streets of their country.” So while I would never advise someone in a vulnerable position akin to that of Gabrielle Giffords or Trayvon Martin or Mark Carson, a gay man who was recently murdered on the streets of New York in an apparent hate crime, to arm themselves in self-defense, I damn sure don't feel the right to judge them if they do. Gun ownership among the craziest people in our society is dangerously high, and there doesn’t seem to be anything we can do about it. Those who choose to counter it with their own guns are simply pursuing the inexorable logic of American life, the logic of the gun cult.

This isn’t a new idea. On May 2, 1967, in one of the most startling acts of political theater in American history, a few dozen members of the Black Panther Party marched on the California State Capitol carrying loaded rifles and shotguns. The state’s then-governor, a fellow named Ronald Reagan, was addressing schoolchildren on the Capitol steps and bolted inside, afraid an armed insurrection was in progress. But under existing law, what the Panthers did was entirely legal: The guns were not concealed and were carefully pointed at the sky. On the Capitol lawn, Panther leader Bobby Seale read an “executive mandate” directed at “the American people in general and the black people in particular.” Since African-Americans were subject to “terror, brutality, murder and repression” by the police and other authorities, Seale went on, the time had come for black citizens to take up arms and defend themselves.

I don’t mean to fetishize the Black Panthers, as many white radicals did at the time. They were a sexist and autocratic paramilitary group that degenerated into crime and internecine warfare in later years (in no small part thanks to intensive penetration and persecution by the FBI). Those Sacramento images were used at the time – and still are -- to strike terror in the hearts of Middle America and paint the group as violent, white-hating revolutionaries. In fact, no shots were fired that day and the smattering of violent acts committed by the Panthers over the party’s entire existence pretty much disappear in comparison to the crushing violence inflicted on them by police and the U.S. government. I know many progressives would say that the Sacramento demonstration and the whole Panther experiment backfired, but I’m not so sure. The Panthers made their point, which was that if you allow the people to bear arms, sooner or later they might decide to use them for something besides killing each other. So the members of the California Legislature changed their drawers and passed a gun-control law, lickety-split.