When offices like comptroller are seen as irrelevant, it helps monied interests preserve the status quo. Here's how 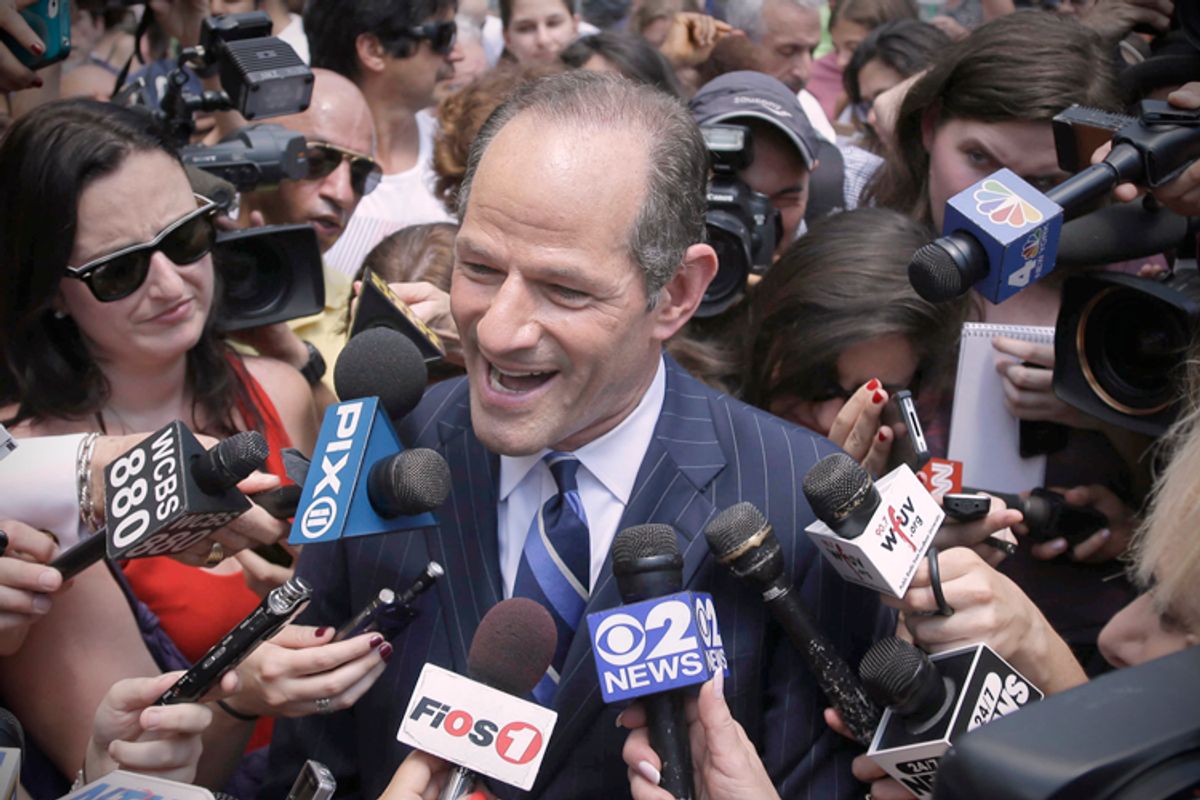 The cynical view of Eliot Spitzer's run for New York City comptroller is predicated on the parable about the desperate striver seeking a public office -- any public office, no matter how insignificant -- just to get back in the game and eventually reach a much higher-profile, more glamorous and more powerful office in the future. Promoting this narrative, the New York Times editorial board recently wrote that Spitzer "is a political animal who clearly finds it hard not to have an audience" and then went on to lament that his candidacy forces "us all along on (his) journey of personal ambition."

Spitzer is, no doubt, an ambitious person -- as is almost everybody in electoral politics. And who knows, perhaps he does still have aspirations for a better-known office than comptroller. It's certainly possible, but why is that relevant? Isn't it possible -- and even, perhaps, encouraging -- that such a high-powered candidate is running? Spitzer is certainly imperfect (who isn't?), but nobody doubts that in terms of intellect and economic policy experience, the appropriately nicknamed "Sheriff of Wall Street" is more than qualified. Isn't it a good thing, then, that such a qualified candidate is running for such an important office?

Let me guess: You did a bit of a double take when you saw the word "important" in that last sentence. "Wait," you're thinking. "Did this guy actually just assert that the New York City comptroller is an important office? Really?"

Yes, really, and the fact that such offices are too often seen only as either destinations for uninspired bureaucrats or insignificant stepping stones for ladder-climbing machine pols reflects a troubling ignorance -- one that conveniently helps monied interests preserve the economic status quo.

The perception of the Big Apple's comptroller office is a perfect example of such ignorance. If you pay attention to political news, you are led to believe that after president and Supreme Court judgeships, seats in the U.S. Senate and House are the most politically powerful offices in America, and certainly far more powerful than a municipal comptroller. Likewise, if all you do is watch cable TV news, you'd think it is downright absurd to claim that one city's comptroller is at least as powerful -- if not more powerful -- than most of those preening legislators in the nation's capital.

But take a quick gander at this snippet from Dan Gross' writeup of Spitzer's candidacy in Newsweek:

The comptroller oversees the city’s five public-employee pension funds, which combined have about $140 billion in assets and manage money on behalf of 237,000 retirees and 344,000 employees of the city and related entities. The comptroller also helps deal with bond issuance. New York City has about $41 billion in general-obligation debt outstanding. In 2012, the city issued $8.1 billion in new-money bonds, and sold another $6.6 billion in bonds to refinance existing debt at lower interest rates.

The stakes are extremely high. The costs of poor management in these areas are massive, for all taxpayers. The potential for corruption and debacles is pervasive. Municipal finance has historically been a cesspool of conflicts of interest—investment firms help fund the campaigns of officials who dole out underwriting assignments, and the revolving door swivels rapidly. Money-management assignments are often doled out less on merit and more on personal connections. Wall Street firms have routinely sold financial products and investment strategies to unsophisticated city and state money managers that wind up causing big losses for the taxpayers.

With those facts in mind, ask yourself: Is there a senator or House member with as much singular authority over financial resources as this municipal office? The national political press corps pretends that the answer is yes and that D.C. politicians holding glam offices in the federal legislature are supreme, but any honest assessment suggests the actual answer is no; despite all the TV time and all the hype and notoriety, not one of those Washington pols is as powerful as the supposedly lowly New York City comptroller.

Of course, that office is but one of many such offices with far more power than its low profile might lead you to believe it possesses. Spitzer, for instance, previously showed that a sleepy state attorney general office, once seen as a political backwater, can have way more oversight, investigatory and reform power than even the most attention-seeking congressional chairman. Likewise, disgraced former House Majority Leader Tom DeLay would probably attest to the fact that local district attorneys have more real-world political power than most of the Washington lawmakers you see on the television networks' Sunday shows. And then there are all the other assorted state and big-city treasurers, comptrollers and controllers, many of whom have more regulatory and financial power over the economy than most far-more-famous politicians in Washington.

Because media coverage of politics obscures these facts and focuses so much political activism and attention on Washington's glam offices, most Americans have no idea that down-ballot races are often far more important than races at the top of the ticket. And, as previously alluded to, that obliviousness serves the interests of the monied establishment.

Once again, the New York City comptroller's office is illustrative. As Politico and others allude to, politically active CEOs almost certainly fear a populist like Spitzer in that municipal office. I would add that those CEOs more fear Spitzer in that municipal office than in a U.S. Senate seat. Why? Because unlike a senator, a New York City comptroller can start voting massive blocs of stock against corporate board appointments and for disclosure of secret campaign contributions. Unlike a senator, a comptroller can also use those blocs to sponsor serious shareholder resolutions that often have a better chance of directly changing corporate behavior than any lobbyist-written legislation watered down enough to get through Congress. Unlike a senator, a comptroller can have a direct impact on outsize salaries in the financial sector.

In light of this, corporate interests want races for powerful down-ballot offices like comptroller to be low-profile affairs. That makes those races far less expensive to buy with campaign contributions. It also means there is little election-year debate about the regulatory policies those offices oversee -- and thus little exposure of corporate-written policies that voters might not support if they found out about them.

On the flip side, Big Money is thrilled that most election coverage -- and thus voter attention -- is disproportionately focused on federal legislative races, which so often hinge on non-economic issues and scandals, aka topics that have little to do with the financial and regulatory issues Big Money really cares about. For the same reason, Big Money is happy that offices like comptroller typically attract obedient machine politicians and go-along-to-get-along bureaucrats rather than high-powered reformists and activists.

That's why, regardless of your particular feelings about Spitzer, his candidacy is a welcome development. The attention he inherently brings to such a race provides a high-profile reminder of the secret Big Money doesn't want us to know -- namely, that these seemingly unimportant offices are often where the real political power in America resides. It is also a reminder that glam offices may be a perfect fit for vain attention-seeking professional politicians -- but lower-profile offices can often be better suited to people genuinely interested in the unglamorous work of bringing about real change.