There's nothing wrong with being "bro-choice"

A conservative political troll tries -- and fails! -- to expose "the truth" behind men who support abortion rights 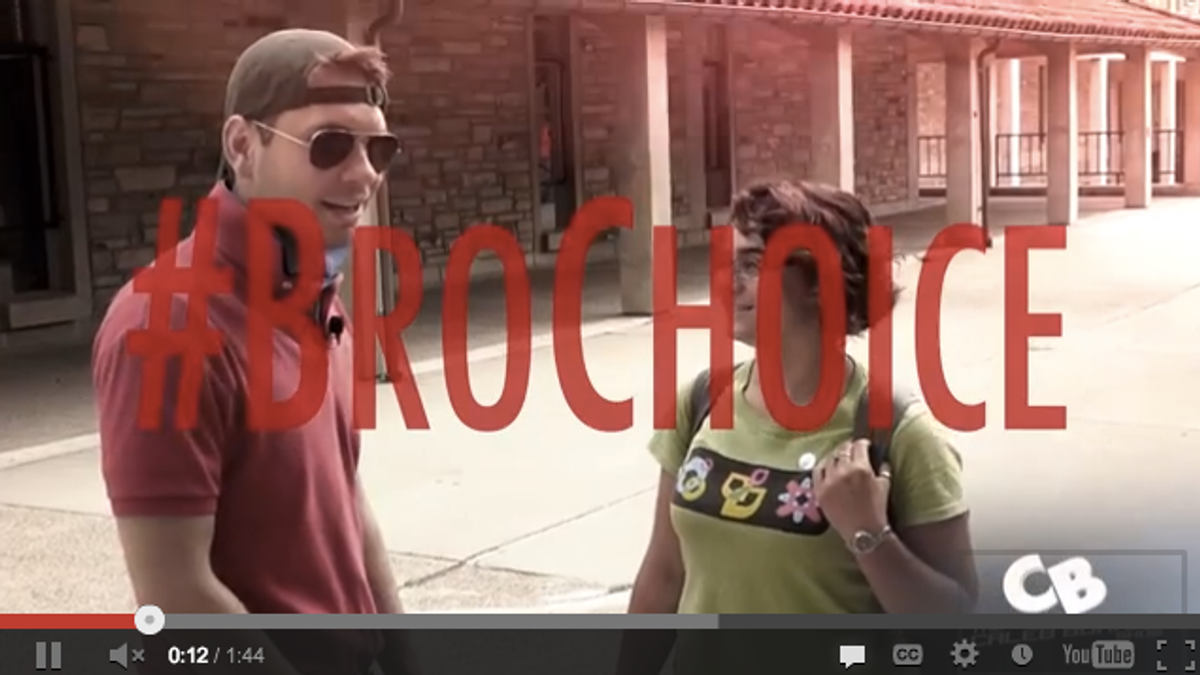 Caleb Bonham, a self-described "Christian politico with a sense of humor," does not support women's reproductive rights. And he doesn't understand why other men would, either, so he made a YouTube video to "expose" the "bro-choice" movement, a tongue-in-cheek descriptor for guys who are down with contraception, safe access to abortion care and, you know, women's ability to use their lady-brains to make important decisions about their lives.

For those who haven't heard of it, "bro-choice" started with Sarah Silverman, who happens to have a good lady-brain on her shoulders and wanted men to get involved in the movement opposing restrictive abortion bans and the lawmakers behind them. So she made a funny video about it.

Soon after, the "bro-choice" nomenclature was picked up by campus organization Choice USA and other advocates as a way to encourage men to stand with women and fight policies that roll back access to vital healthcare. But Bonham doesn't seem to know about the alliance building, self-reflection or activism that's sprung up as a result of Silverman's meme, probably because he doesn't know how to use Google or read Twitter. (Just kidding! He definitely knows how to do those things!)

Here's how a "bro-choicer" recently explained why he would stand in the sweltering Texas heat to protest his state's stringent abortion restrictions: "They may pass it, but I’ll still protest it. And when they pass it, I’ll keep protesting it. Inside that building there are a lot of men working against women. I’m just representing all the men that are outside this building that support women."

And another: “Just like every civil rights fight, if someone is not free, none of us are free. All of our rights are at stake. This is not the first issue where our rights have been eroded, but this is one that happens to affect 52 percent of the population. We all need to fight for this.”

And one one more: "I’m the coordinator for the clinic defense team out of Houston. We have about 50 people in our clinic defense team, and about 35 of them are men. So in Houston there’s a lot of men standing up for this issue. There’s a lot of men who feel very strongly about it. We’re going to stand side-by-side, shoulder-to-shoulder with the women of Texas and show them that we support them.”

Now here's Bonham: "Bro-choice is where I'm pro-choice because I'm a man ... because if women don't have access to abortion on demand, I won't get laid as often."

What follows is a series of exchanges about how men who support abortion rights do so because they "want to get laid." And, surprise, Bonham managed to find some college dudes willing to agree with his premise. Zing! Super zing!

Here's another conversation Bonham has with a woman in the video:

Bonham: Are you pro-choice?

Bonham: Would you sleep with me if I was pro-life?

Bonham: So being pro-choice would maybe get me a little more tail?

Now I'm pretty sure that he thinks he's scored some kind of a slam dunk/touchdown/ultimate frisbee point (what are those called?) with this exchange, but the truth is that Bonham would be hard-pressed to find a pro-choice woman who would want to sleep with a dude who is openly hostile to basic reproductive rights. Because a cynical belief that women can't make decisions about their own lives -- and the whole forced pregnancy thing -- are legitimate boner killers.

In fact, much of the outrage this video stirred was among the conservative blog circuit, who offered headlines like: "'BroChoice:' Man Complains Casual Sex More Difficult if Abortions Banned" and "Students Embrace 'BroChoice,' Want Abortions Legal for Sex Without Consequences."

But here's the rub: Consensual "casual sex" "without consequences" appeals to lots of feminists (male and female), not just to sleepy-looking college bros answering a political troll's confusing questions.

In fact, one of Bonham's interviewees said something that I think most pro-choicers and "bro-choicers" can get behind: If you're supporting reproductive rights and women's autonomy, "what's wrong with getting laid a little bit more?"