While the retail giant's P.R. machine chugs along, the truth behind the press releases is dark and ugly 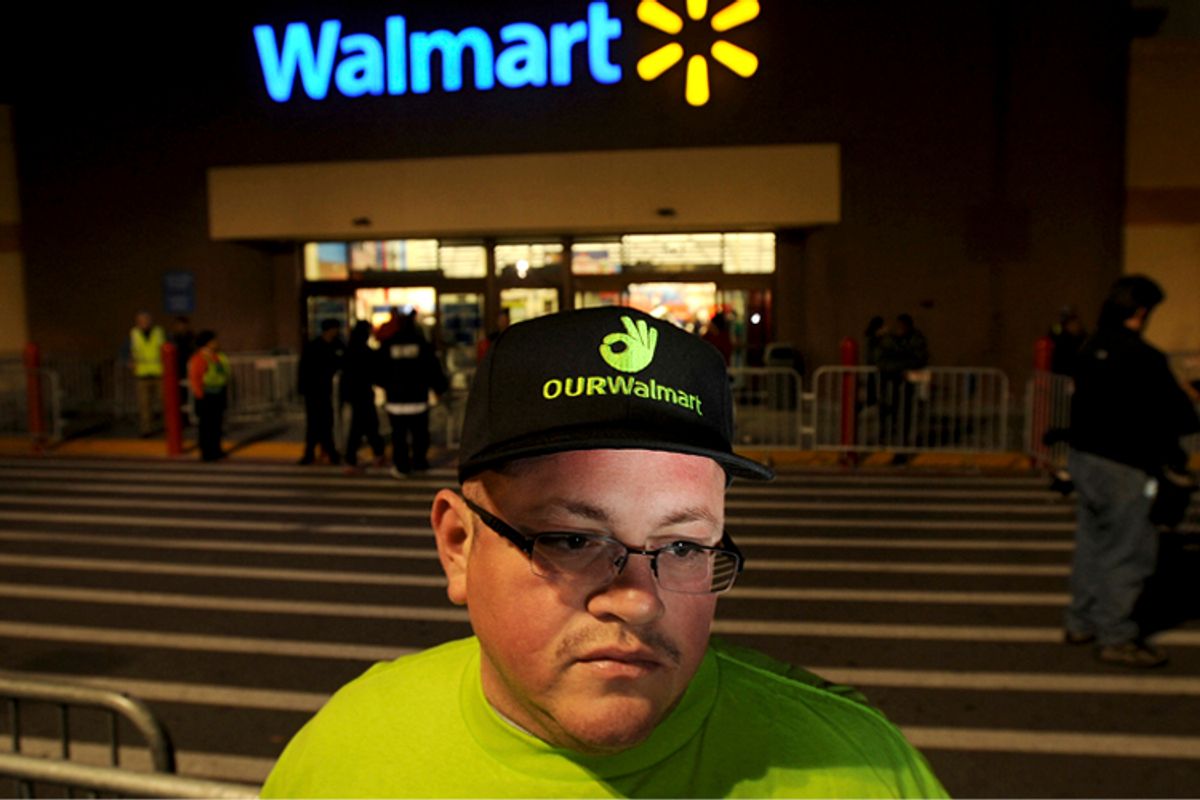 Last month, amid the flap enveloping disgraced celebrity chef Paula Deen, Wal-Mart put on a face of corporate responsibility. “We are ending our relationship with Paula Deen Enterprises and we will not place new orders beyond those already committed,” its official statement read.

Yet, behind the appearances of zero tolerance for the kind of hostile work environment -- rife with racial slurs, discrimination and harassment – that Deen allegedly fostered, was a deep irony. Wal-Mart, like Deen, was engaging in its own bullying right around the same time.

Just days before ditching the TV personality, Wal-Mart was busy entering into a standoff with the Washington, D.C., City Council over its proposal for a living wage law. In a Washington Post Op-Ed titled “The D.C. Council Has Forced Our Hand,” Wal-Mart regional manager Alex Barron penned the corporation’s intention to close three of six planned superstores if the council voted and passed the bill that would raise D.C.’s minimum wage to $12.50 per hour.

The move to intimidate the D.C. council should come as no surprise as the nation’s largest retailer refuses to allow its workers to unionize, hindering their rights to fair wages. Wal-Mart’s promise to bring “everyday low prices” and jobs to cities across the nation comes at a high price.

While Wal-Mart claims the hike in minimum wage would compromise its ability to create 1,200 D.C. jobs, its competitor Costco disproves the theory that corporations cannot pay livable wages and earn profits. Wal-Mart workers typically earn $8.81 per hour in contrast to the average Costco worker's $21.96 an hour and most are eligible for benefits. A report from the Democratic staff of the House Committee on Education and the Workforce estimates that employees from an individual Wal-Mart super store in Wisconsin may cost taxpayers anywhere from $904,542 to $1,744,590 in public assistance benefits annually.

The D.C. council approved the proposal for six superstores under the condition that it would not drain government resources, a commitment to D.C. residents that Wal-Mart does not seem to fully respect.

A predominantly African-American city, affectionately nicknamed “Chocolate City,” Washington may potentially have more to risk than the acquisition of 1,000 low-paying Wal-Mart jobs. The retail giant possesses a long history of workplace discrimination and support for conservative advocacy groups that produce model legislation, which undercuts the rights of black and brown communities.

Since the mid-1990s, the Equal Employment Opportunity Commission has filed about 60 employment discrimination lawsuits against Wal-Mart. As recently as 2009, a federal judge awarded a $17.5 million settlement to African-American truck drivers who sued the company, claiming racial bias in its hiring practices from 2001 to 2008. And in 2011 the Supreme Court dismissed a class action suit of gender discrimination originated by former African-American Wal-Mart employee Betty Dukes, deciding Dukes v. Wal-Mart 5-to-4 and leaving advocates to fear that the corporate powerhouse was “too big to sue.”

Until May 2012, Wal-Mart was one of the American Legislative Executive Council’s (ALEC) wealthiest corporate members. ALEC emerged at the forefront of American politics in recent years with its support for stringent laws that negatively impact communities of color. Restrictive voter registration laws crafted by ALEC became a focal point of the 2012 campaign as millions of Democratic-leaning African-American, Latino and elderly voters without state identification were in danger of voter disenfranchisement.

In fact, if Paula Deen wants to follow a blueprint of how to rebuild a tarnished reputation, she can simply follow the distributor that cut ties with her. Wal-Mart has undergone rigorous image rehabilitation in the face of numerous discrimination suits. For the past decade it has covered its transgressions by promoting diversity trainings, purchasing from minority-owned businesses, and awarding corporate bonuses in response to the hires of people of color. Yet in spite of its efforts, discrimination suits continue, along with labor strikes and calls for mass boycotts from groups such as the Wal-Mart Strikers, Our Wal-Mart and the Global Union Wal-Mart Alliance.

While denouncing Paula Deen’s actions was an effective P.R. tactic, Wal-Mart watchers should not assume this reflects anything more than that. The next step is to encourage D.C. Mayor Vincent Gray to sign the bill that would hold Wal-Mart accountable for its discrimination against workers.

“I is what I is and I’m not changing,” Deen cried to Matt Lauer during her tear-soaked apology. As Wal-Mart’s lobby continues to pressure Mayor Gray to veto the living wage law, it looks like Wal-Mart isn’t changing either.