Meet the Hasids: Getting to know the people who scared me

As a girl, I was afraid of my Orthodox neighbors. Twenty years later, I reached out to try to understand them 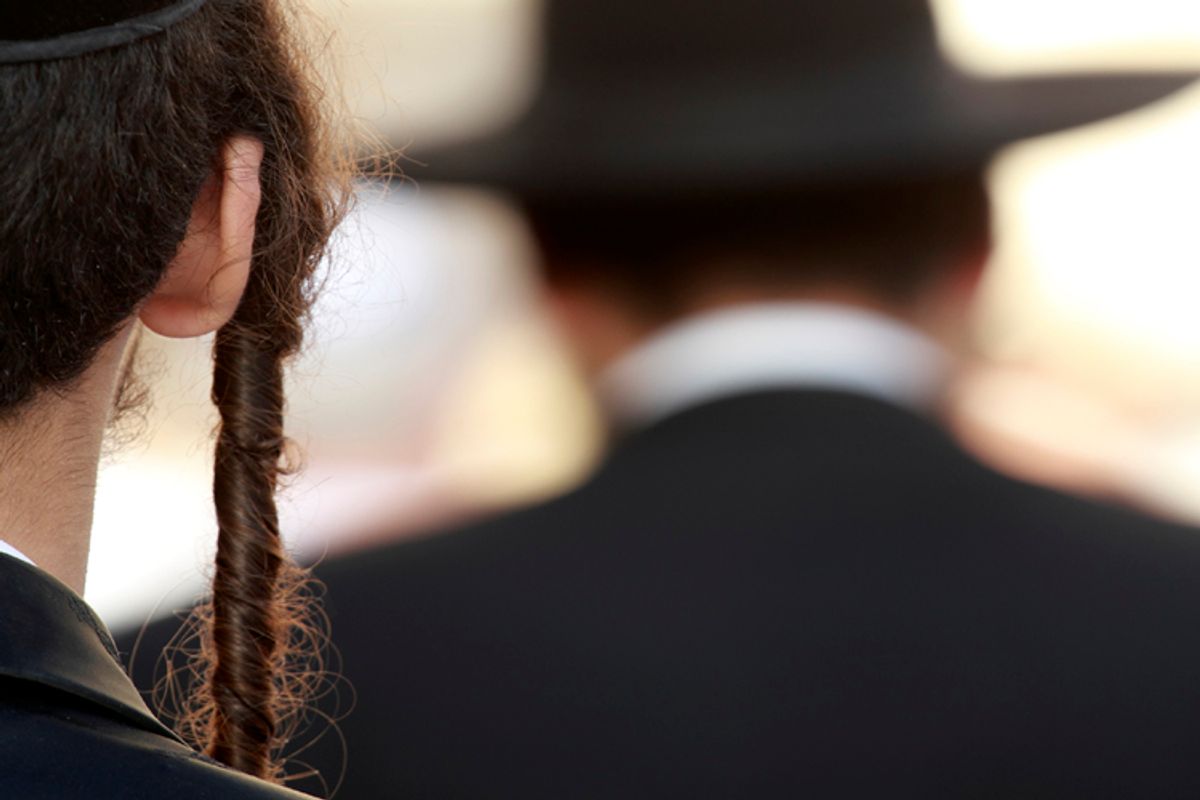 This past spring, I went looking for a family of Hasidic Jews, neighbors I had avoided in my youth, to make amends and learn about Judaism. As someone who grew up with no religion, I saw this effort as my own tiny project to promote harmony. Maybe I couldn’t solve conflict in the Middle East, but I could increase my own understanding and tolerance.

I lived a few doors down from the Hasidic family when I first moved from Dallas to Los Angeles to stay with my dad and stepmom. The three of us occupied a tiny house of 500 square feet, like an outhouse that had sprouted additional rooms as an afterthought. I was 10 and slept on a sofa. That house was dwarfed on all sides by apartment buildings. We tumbled out the front door like a clown family from a too-small car. I would have felt more self-conscious, but this was a neighborhood of misfits: single moms, eccentric elders, late-night yellers. Perhaps none more strange to me than the family of Hasidic Jews who occupied a shabby apartment complex on the corner, the front yard crammed with old playground equipment and quarantined by a low but sturdy fence.

Some of the Hasidic boys were my age. I had never seen anything like them. They had tassels at their waists and curls at their ears. In those years, I went “boy crazy” and even they were weighed as romantic partners; we made odd imaginary pairs. I would see them in the evenings walking in their uniform of tiny suits with the rest of their family: one dad and one mom, and a string of siblings from big to small like stairs stepping down.

For all the time I had spent eyeing those kids, I never once spoke to them, nor they to me. Whatever made their world operate was so different from the particulars of mine; it was like we occupied dimensions so distant that any sound I might utter would dissipate before it reached their ears. I had the idea that they might be an optical illusion, a projected image on a screen; if I sneaked up and looked behind it, I’d see only dust bunnies and boxes.

Back in L.A. for a visit, I drove past the old apartment building and spied a Hasidic man standing nearby, though whether it was the same family as before I didn’t know. Almost 20 years had passed.

I looked at a map of the area and found an Orthodox synagogue seven blocks from that corner. I knew that, as ultra-Orthodox Jews, they’d live within walking distance of their place of worship. I didn’t know if that was the right synagogue, but decided it was worth a shot. What’s the worst that could happen? I’d celebrate Sabbath with some Jews. I called, and made sure they were all right with visitors and to see if I needed to cover my hair. A rabbi with a voice like Joe Pesci said, “It’s not important your hair.”

By the time I was ready, the only thing showing besides my hair was a few inches of neck, my face and hands. Inside looked like an old gymnasium. I saw a couple of women behind a partition and I joined them. They were older women speaking in hushed tones and they nodded in my direction and went back to talking.

Eventually, a woman my age approached and asked what brought me here today. I'll call her Rebecca. She looked surprisingly normal. I knew her hair was a wig, but it looked like regular hair except better. It was drizzly outside and my hair was a fuzzy mess but hers was smooth.

I explained to her about living down the street from the apartment complex when I was younger and how I saw the kids but never spoke to them. She said, “My husband grew up there. He’s the head rabbi here.” I asked, “How old is he?” She said an age two years above my own and then nodded and smiled like my being here was the most normal thing in the world. “Their mother still lives in that complex,” she told me. “She’ll be here later.”

I was excited, and nervous. I had found them.

Male voices chanted Hebrew behind the partition. More women joined on our side. They smiled at me, and set about gossiping quietly with one another. Every once in a while, one would stand, bow, step back and mouth prayers.

After the service, we did the prayers over cups of wine and blessings on the challah loaves. An older woman approached me. Here was the mother, who had been told about me. She said her name in Hebrew, a guttural sound like a growl with a hiccup. I tried to imitate the noise, but she looked disappointed. “Why didn’t you ever come into our yard to play?” she asked after we exchanged pleasantries. She seemed miffed. I didn’t know what to say; I hadn’t realized that was an option. I don’t recall anyone in her family ever making eye contact with me. She said, “The neighbors are always so standoffish with us.” Now I was getting miffed. Instead of seeing me as the one reaching out, she was seeing me as representing all those who hadn’t.

She formally introduced me to her son the rabbi — a brief, awkward hello with no handshake. When we were kids, it would have been OK for us to talk and play, but now we were officially forbidden from touching and discouraged from engaging in unnecessary chitchat. Before he turned away, I spied faint traces of the little boy through his enormous beard.

The mother asked me to stay for the women’s group. As we waited for the others to join us around the table, I tiptoed back to our previous conversation. “I don’t think the neighbors realize you’re open to social interaction with them,” I said. I was trying to be as gentle as possible. She nodded vaguely at me and then introduced me to the other woman as an old neighbor who had returned. “She didn’t feel comfortable saying hello back then, but she’s come now.” Everyone raised their tiny cups of white wine at me and I said, “Better late than never.”

The mother made me promise to come back for Passover the following Friday night. Her tone had softened, but her demeanor was still stiff. I wasn’t leaving town until Monday, so I was able to accept the invitation.

I returned Friday, the start of the weekly Sabbath. As I entered the synagogue, I waved to Rebecca and the mother. Four long tables filled the room with plastic settings all the way down. The room was full of people: women on one side of each table, men down the other. I squeezed into an available seat among a group of Persians who seemed on friendly terms with one another. I followed the rabbi’s every instruction: dip the lettuce in salt water, make a tiny matzo sandwich with the sweet apple mush, drink the wine while leaning to the left to symbolize a position of relaxed repose. I wanted to understand. This evening was about remembering that God intervened to help the Jews escape Egypt. The point wasn’t to dwell on the years of slavery, but to celebrate freedom and life despite hardship. At the end, I raised a cup. “Next year in Jerusalem!” I shouted with everyone else.

After the dinner, just the rabbis, their wives and children, and the mother remained. I stayed to help clean up. Just as Rebecca showed me, I scooped up the plastic table coverings — plates, cups, cutlery and all — into one big trash ball and stuffed them in the cans. Rebecca asked if I minded helping with something in the kitchen. I followed her to the back. It was at least 100 degrees in there. The burners on two industrial stoves were going. “Would you mind turning the burners off?” she asked. I paused, considering the situation. I had read about observant Jews hiring a non-Jew to stoke their fires and do all the stuff that’s forbidden during the Sabbath, but I had thought the practice of employing a Sabbath goy was comical and old-timey. I didn’t think it still happened. Appliances hooked up to timers and slow cookers eased the burden of adhering to the Torah’s commandments. “Are you asking me to be your Sabbath Gentile?” I inquired. Already, sweat was beading on my brow. My impression is of the Sabbath goy as the lowliest role imaginable. If we lived in a caste system, it would be the bottom of the barrel.

It’s a moment I’ll never forget. She nodded slowly and said, “If you don’t mind.” I thought of how rare it was for Passover to fall on a Sabbath. Normally, they’d be able to turn off the stoves themselves. “What would you do if I wasn’t here?” I asked. “We’d leave them on or find someone on the street.” I tried to imagine the rabbi roaming the block explaining his need to passersby. It was almost midnight. Would they slip a $20 to a homeless person to do the task?

Part of me was disappointed. If God didn’t want them to touch fire on the Sabbath, maybe He didn’t want me to touch it either. But who was I kidding? My car was parked out front. Looked at the right way, I told myself, the Sabbath goy is an important role. I’d be helping them keep their covenant with God. I had thought just showing up here was an act of love and healing, but here was an opportunity to put that love into action. God’s expectations of me weren’t fewer, just different.

“No problem,” I told Rebecca, and reached for the knobs.

Corinna Nicolaou is a bud tender and writer in Washington state. Her first book, a memoir about religion, is forthcoming from Columbia University Press. It will be available in 2016.