They still hate us: No one wants to be America, anymore

Forget the standard lunacy that emerging nations "hate our freedoms." They just don't want to be Westernized 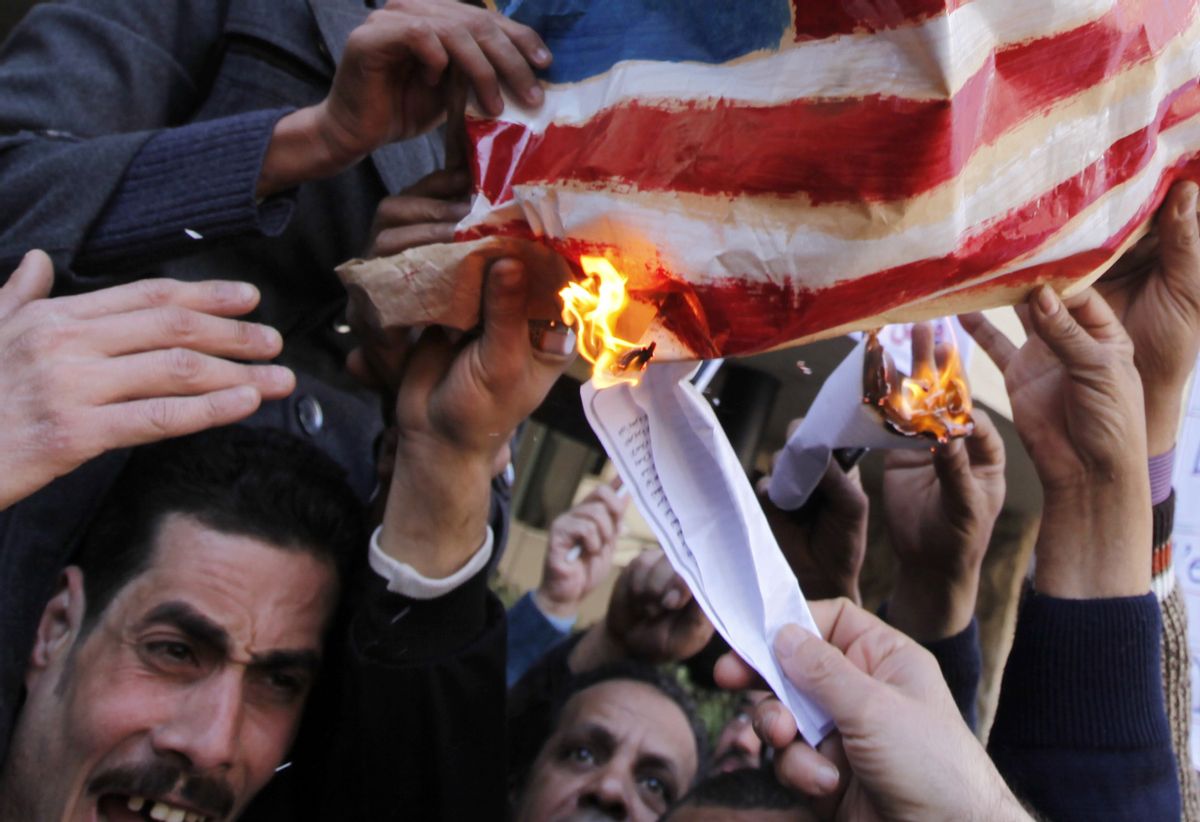 It is common enough, and true, to say that what happens in Egypt as it stumbles through its political dawn or dusk — you cannot tell which at this point — matters to all Arabs. With 85 million people, the nation accounts for a quarter of the Arab world. So the Arab Spring is at stake. And yes, Egyptians will do much to define it.

But what is at issue in the Middle East — in Egypt, but also in Turkey, in Iran, and elsewhere — is larger than many of us seem to recognize. It is not just the Arab Spring, full of promise as it remains, that we have to think about when news arrives from Cairo, or Istanbul, or somewhere in the Persian Gulf. The Middle East’s discord matters to all of us.

Well, not to get too airy, but what we witness in the Middle East now is going to tell us a lot about what kind of century we have on our hands. It is the turning of history’s wheel. It is what will happen, with variants, wherever there are people who are un-modern and want to become modern — which is to say, people almost everywhere. Becoming modern is the project of our time. And too few of us are ready to accept it as such.

Have you ever wondered why so many non-Western people harbor such visceral dislike of Western nations, and almost always the United States more than any other? The standard answer, never more clearly articulated than after the Sept. 11 attacks, is that these people envy us. “They hate our freedoms,” George W. Bush advised. “They want our stuff,” a columnist wrote (only half in jest, sadly). They aspire to be “just like us,” as an older formulation has it.

Utterances such as these are versions of what the scholars used to call “modernization theory,” an ideological swamp it is best not to wade far into. The thesis is that to modernize one must Westernize. If you want to progress, you have to progress the way we Westerners progressed, because we invented “progress” and “the modern” and other such things.

Modernization theory was a Cold War construct, and it held for a time. Postwar Japan is a noted example, which is why Japan today is so wrenchingly confused as to what it is and what it is supposed to do. Some of Europe’s former colonies, achieving independence in the Cold War decades, tried it on, too — usually to no brilliant result.

Two problems now linger. One is that too many Westerners, especially those who determine foreign policies, still accept this rubbish as a given. The other is that Westernized elites in emerging countries — Egypt and Turkey are glow-in-the-dark examples, but there are numerous others — buy into the same thinking, and so are unwilling to accept the aspirations of their own majorities.

Here is the rub, the task, the thing that needs to be grasped: Modernization has to be separated from Westernization if it is going to occur constructively from here on out. Making the two equivalent is a 500-year-old habit among Westerners, begun when Vasco da Gama landed in India in 1498. My candidate for the greatest distinction of our time is that people will be able to become modern while keeping their own cultures, traditions, histories, values and so on.

Can we explain the fate of Egypt’s Mohamed Morsi in any other context? A year ago the secularized elite despised the army and all the gore and repression it stood for. These same people now embrace the army because it removed from office a properly elected president who happens to be Islamic. This week the Army gave them what they apparently wanted: a new cabinet of 34, with not one member of an Islamic party in it.

In the end, one does not worry much about the emerging nations. They have the force of history at their backs. Modernizing without Westernizing is what the concept of Islamic democracy is all about, for instance. It is a search for institutions that are built by, and reflect, the people who are going to live by them. “Inevitable” is not too strong a term for this process, hard and long and full of reversals as it will prove to be.

Other examples, in different shapes and forms: The Chinese have started down the road, Communist Party rule notwithstanding; the Indians have a good chance at it (although some are caving to the West’s neoliberal enticements). Latin Americans have signaled — some more loudly than others — that the long-borne yoke and the model and the influence of the norteamericanos are becoming things of the past.

No, the worry lies in places such as (but not only) Washington. It is not at all clear in many Western capitals that a certain kind of power — an ideological or even psychological power, greater than any military — is going to be surrendered. What is at issue is the dominance of the West, of course — dominance as opposed to the equality of the “non-West.” Think not that anyone in the White House fails to understand this.

The American case seems especially discouraging. What we call the American century began in 1898, when the U.S. dismembered (yes, literally) the Filipino resistance to the Spanish empire. They were aspiring democrats, as they made plain, but not democrats the way most Americans liked their democrats. Little has changed in a century and some.

Some years ago I sat in Tehran and had tea with a 30-ish Iranian. She wore the obligatory scarf, but she was no friend of the clerics. The interesting thing was she had no impulse to dump over the side all that had happened in post-Shah Iran. Iran was simply becoming Iran, she told me, and this would take a long time. And then something memorable: “We want to be modern, but we want to be modern Iranians.”

She remains a friend. She gave me the key to much that has happened in the many years since we met. She showed me the river that runs beneath our world and time.