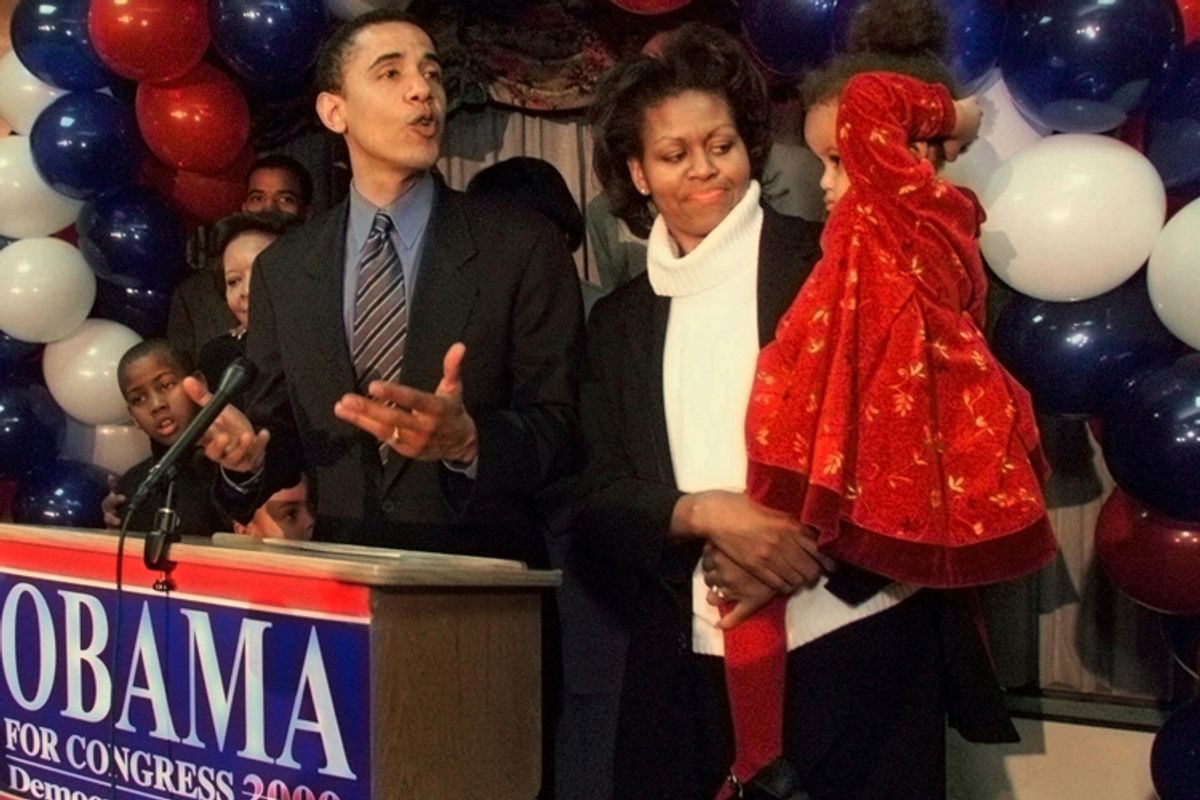 Update, 1:55 p.m.: The president just spoke for several minutes on the plight of African American males in the context of the Trayvon Martin speech, saying that Martin could have been him 35 years ago.

Original post: President Obama’s refusal thus far to pursue federal civil rights charges against George Zimmerman has led some to accuse him of ducking the issue of racial profiling. But, as an old radio ad from Obama's 2000 race for Congress (see below) demonstrates, the president's failure to bring up profiling really demonstrates that being president of the white-majority United States forces him into positions far different than those he took as a state senator from a black-majority district on the South Side of Chicago.

In fact, when Obama was a state senator, racial profiling was one of his signature issues, used to build his bona fides with the black community. In 1999, he co-sponsored a bill that would have required police officers to record the ethnicity of every motorist they stopped. The bill went nowhere in the state senate, which was dominated by suburban Republicans, but Obama touted it during his campaign for Congress the next year.

Running against Rep. Bobby Rush, a former Black Panther, Obama was slurred as a “white man in blackface” -- an Ivy League interloper who did not understand the problems of South Siders. To prove otherwise, he cut a radio ad that began with a racial profiling skit: a black woman pulled over by a white cop with a heavy Chicago accent. When I interviewed him that year about his campaign, he played the ad for me. Listen to it here (at the 40:15 mark):

“This is State Senator Barack Obama,” Obama said in the ad. “Racial profiling is not only wrong and degrading, it’s dangerous and can lead to unexpected confrontations. Not only that, it erodes confidence in law enforcement. That’s why I’ve introduced legislation to address the problem of racial profiling, and protect you from those who would abuse your rights.”

Obama lost that election, but two years later, his Democrats won a majority in the state senate. That meant Obama could pass the racial profiling bill -- although in doing so, he created hard feelings among fellow members of the legislative black caucus. Senate President Emil Jones, the political patron who was helping Obama build his credentials for a U.S. Senate run, snatched the bill away from State Sen. Rickey Hendon, who had been pushing it for years, and made Obama the chief sponsor. (Hendon, who had been stopped for Driving While Black, had a one-word reaction: “Bullshit.”)

Obama removed provisions that had been objectionable to police and Republicans. The original bill would have mandated sensitivity training for officers guilty of profiling and yanked state funds from departments that refused to comply. Obama’s bill required diversity training for all officers, and removed the financial punishments. Obama won over the Fraternal Order of Police, who no longer felt they were dealing with an angry black senator. The Republicans voted for it -- unanimously. Hendon thought the bill was “watered down,” but even he admitted that random stops of black motorists decreased, because the police knew someone was counting.

The president's old position on racial profiling takes on added relevance today with the news that he is reportedly considering New York Police Department Commissioner Ray Kelly to fill his new vacancy to lead the Department of Homeland Security. Kelly has come under fire for his department's Stop and Frisk program, which has targeted black and Latino young men, stopping them to the tune of nearly 700,000 times a year, with a minuscule percentage of those stops leading to arrests or prosecutions. While President Obama says Kelly has done an "extraordinary job," then-Senator Obama might have used a different phrase.