We think we know what danger looks like. We don't 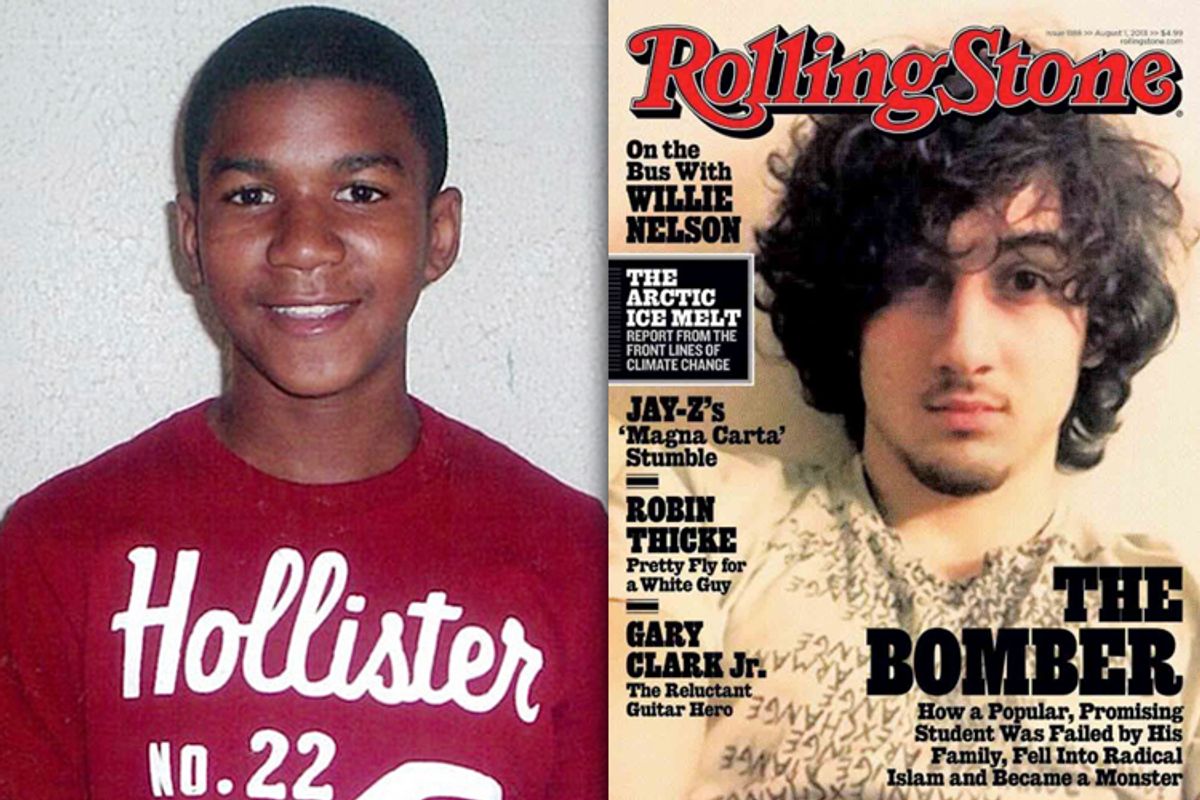 There is no way to truly know whom we need to protect ourselves from. Dangerous people rarely look the way we expect. We were reminded of this in early 2013 when we learned that Dzhokhar Tsarnaev, who looks like the “boy next door,” was identified as one of the two young men suspected in the terrorist bombings near the finish line of the Boston Marathon. Three people were killed and nearly 300 others injured. This notoriety, I imagine, explains why Tsarnaev is featured on the cover of the August issue of Rolling Stone.

The magazine has been accused of exploiting tragedy, glorifying terrorism, and trying to make a martyr or a rock star out of Tsarnaev. But protests aside, the cover is provocative and pointed. It is a stark reminder that we can never truly know where danger lurks. It is also a reminder that we have certain cultural notions about who looks dangerous and who does not. These notions are reinforced, amply, by the article accompanying the cover, something few people seem to be talking about.  The tone of Janet Reitman’s reportage and the ongoing conversation about Tsarnaev as a “normal American teenager,” are an interesting and troubling contrast to the way we talk about, say, Trayvon Martin, who was also a “normal American teenager” and not a criminal or terrorist. George Zimmerman killed Martin because Martin fit our cultural idea of what danger looks like. Zimmerman was acquitted for the very same reason.

Most striking in Reitman’s extensive and well-reported article is how the people who knew Tsarnaev are still willing to see the man behind the monster. Tsarnaev is described by those who knew him in near reverential terms as “sweet” and “superchill” and “smooth as fuck” and “a golden person, really just a genuine good guy.” While Tsarnaev’s community acknowledges the terrible things the young man has done, and mourn the tragedy of the bombings, they are unwilling to turn their backs on him.

The article also reveals how shocked Tsarnaev’s friends and neighbors to learn he and his brother were responsible for such a crime. They were shocked because we have a portrait, in our minds, of what danger and terror look like and it’s not this golden boy on the cover of Rolling Stone. Time and again, the word “normal” comes up. He is described as “ a beautiful, tousle-haired boy with a gentle demeanor, soulful brown eyes.” He enjoyed what most teenagers seem to enjoy—popular television shows, sports, music, girls. He smoked “a copious amount of weed.” He may have committed a monstrous act, but he retains his normalcy.

Reitman’s article is breathless in its empathy for Tsarnaev. Not only does Reitman meticulously reveal how Tsarnaev went from boy next door to terrorist, she seems desperate to understand why. She is not alone in this. When danger has an unexpected face, we demand answers. Family friend Anna Nikeava discussed the Tsarnaev family’s problems and concluded, “Poor Jahar was the silent survivor of all that dysfunction.” Poor, poor Jahar.  Reitman later notes that, “Though it seems as if Jahar had found a mission, his embrace of Islam also may have been driven by something more basic: a need to belong.” The article seems ultimately to be asking, how can we not have some measure of empathy for a young man with so simple a desire to belong?

The empathy does not end with the reportage. There is also testimony, by way of Wick Sloane, a community college professor who has taught many young immigrants like Tsarnaev. He says, “All of these kids are grateful to be in the United States. But it's the usual thing: Is this the land of opportunity or isn't it? When I look at what they've been through, and how they are screwed by federal policies from the moment they turn around, I don't understand why all of them aren't angrier. I'm actually kind of surprised it's taken so long for one of these kids to set off a bomb.” And there are even more of Tsarnaev’s friends, who are still stunned. Friends from college who found a backpack with emptied fireworks fretted about what to do because “no one wanted Jahar to get in trouble.” Even after all he has done, after all we know, Tsarnaev benefits from so much doubt from his friends, his community, and those who seek to understand him and the terrible things he has done.

This, it would seem, is yet another example of white privilege—to retain humanity in the face of inhumanity. For criminals who defy our understanding of danger, the cultural threshold for forgiveness is incredibly low.

When Trayvon Martin was murdered, certain people worked overtime to uncover his failings, even though he was the victim of a crime. Before his death, Martin had recently been suspended from school because drug residue was found in his backpack. There were other such infractions. This became evidence. He was a normal teenager but he was also a black teenager, so he was put on trial and he was indicted. With Tsarnaev, people continue to look for the good. The bounds of compassion for the “tousle haired” young man know few limits. Trayvon Martin, meanwhile, should have walked home without “looking suspicious.” He should have meekly submitted himself to Zimmeman’s intentions instead of what took place on the fateful night of his murder. He should have been above reproach. As Syreeta McFadden noted, “Only in America can a dead black boy go on trial for his own murder.”

Reitman’s article is a solid piece of journalism, and one that belongs in the world. It reveals complex truths about the life of Dzhokar Tsarnaev. Imagine, though, if Rolling Stone had dedicated more than 11,000 words and the cover to Trayvon Martin to reveal the complex truth of his life and what he was like in the years and months and hours before his death. How did he deal with the burden of being the face of danger from the moment he was born? This is a question fewer people seem to be asking.

The way we see danger is, in large part, about racial profiling, a law enforcement practice that has been hotly debated for years because it implicitly connects race to criminality. Racial profiling is what emboldened George Zimmerman, armed, to follow an unarmed young black man walking home, even after police told Zimmerman not to pursue Trayvon Martin. Zimmeman saw a young black man and believed he was looking into the face of danger. He hunted that danger down.

The New York City Police Department's “stop and frisk” program that allows them to stop, question, and search anyone who exudes a “reasonable” suspicion of danger or criminality. The majority of people who are stopped and frisked in New York are black or Latino because these demographics fit our cultural profile of danger. These are the barbarians at the gate, not the boy with the “soulful brown eyes.”

Though there are many objections to the “stop and frisk” program and other forms of racial profiling, these practices persist. Mayor Michael Bloomberg defiantly supports the program. On his AM radio program he said, “They just keep saying, ‘Oh, it’s a disproportionate percentage of a particular ethnic group.’ That may be, but it’s not a disproportionate percentage of those who witnesses and victims describe as committing the murder. In that case, incidentally, I think we disproportionately stop whites too much and minorities too little.”

In her book, "The Color of Crime," Katheryn Russell-Brown says, “Blacks are the repository for the American fear of crime,” and also notes that, “For most of us, television’s overpowering images of Black deviance—its regularity and frequency–are impossible to ignore. These negative images have been seared into our collective consciousness. It is no surprise that most Americans wrongly believe that Blacks are responsible for the majority of crime. No doubt, many of the suspects paraded across the nightly news are guilty criminals. The onslaught of criminal images of Black men, however, causes many of us to incorrectly conclude that most Black men are criminals. This is the myth of the criminalblackman.” Over the past year, countless black men have stepped forward to share their stories of how they have been forced into this myth, including our own president. But very little has changed.

Racial profiling is nothing more than a delusion, born of our belief that we can profile danger. We want to believe we can predict who will do the next terrible thing. We want to believe we can keep ourselves safe. It’s good that Dzhokhar Tsarnaev is on the cover of Rolling Stone, tousled hair and all. We need a reminder that we must stop projecting our fears onto profiles built from stereotypes. We need a reminder that we will never truly know whom we need to fear.