UPDATED: Rich Benjamin responds to critics of his assessment of the president's Trayvon Martin speech 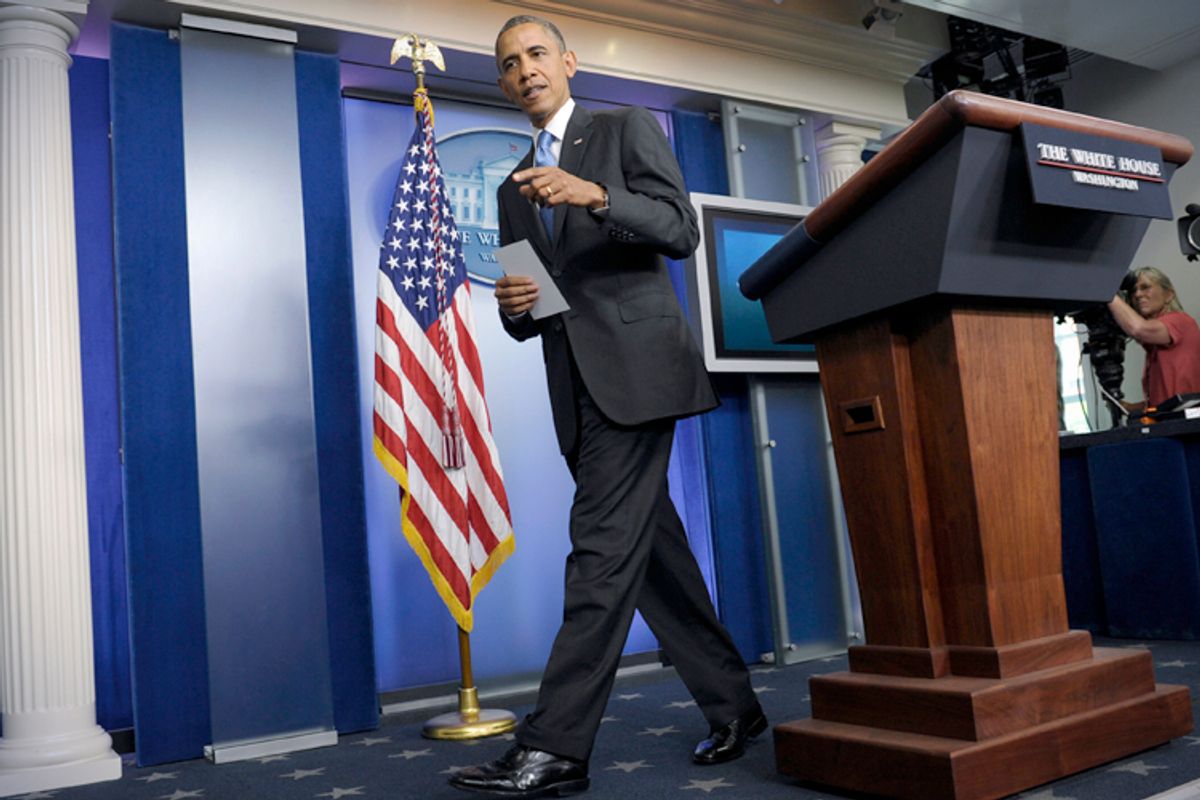 When people hold their breath for your imminent words, isn’t it exasperating when you open your mouth, but don’t say much?

Finally the president has spoken about George Zimmerman’s acquittal. Even as the country waited for his singular response – the nation’s leader and a law professor who once looked like Trayvon Martin – the president danced around the issues. And what a dramatic anti-climax, listening to the president refuse to say anything insightful or profound about the acquittal. In signature professorial style, the president gave us the “context” to the episode and to black people’s “pain.” But he didn’t offer a meaningful opinion on the episode’s hot molten core: racial profiling, vigilantism, and “Stand Your Ground” laws.

Meanwhile, Attorney General Eric Holder delivered trenchant thoughts on the acquittal, demanding action. Before an audience of supporters, Holder recently called for a full investigation of Martin's death after Zimmerman's acquittal. Holder vowed that the Justice Department will act “in a manner that is consistent with the facts and the law. We will not be afraid."

“We must stand our ground,” he told supporters.

Is Holder the president’s aggressive internal mind and voice -- willing to speak truth to power, but unbothered with appearing like an angry black man?

In 2007, when candidate Obama gave that infamous speech in Philadelphia, distancing himself from Reverend Jeremiah Wright, the nation and media responded with enthralled appreciation. It was, indeed, a heartwarming speech. When Holder gave his NAACP speech this past Tuesday, much of corporate-owned cable media —FOX, CNN, and MSNBC—aborted any speech coverage, in favor of their own cranky commentary.

From guns to gays, here is a man always ready to speak truth to power. (Well, except to the NSA). Little wonder the right has been actively trying to drive him from office, even more so than it does Obama.

From a tactical standpoint, it’s wise for the president to avoid discussing race and Trayvon Martin. Many white Americans don’t want that discussion. Many whites avoid that discussion due to their sincere ethical desire to wash the stain of racial differentiation from our nation; they see themselves as Reverend King’s color- blind disciples. Still others avoid the topic because they suffer from racial fatigue. They feel harassed and hectored by so-called race hustlers. Enough with that: They want to focus on the technical and legal aspects of Zimmerman’s acquittal.

Where Trayvon Martin is concerned, the president is also wise to sweep a racial discussion under the rug, because that discussion tarnishes his political capital. Politically, he seeks to run-up his party’s Latino support, by burnishing his reputation for historic inclusion and racial reconciliation. In discouraging too much diversity talk or racial gripe, the president’s image management promotes him as a racial icon with no racial agenda. His image management shrewdly polishes his racial identity even as it downplays it.

Then there’s Obama’s Dark Doppelganger. Don’t you remember? Holder’s first speech in office as Attorney General set headlines afire because he branded America “a nation of cowards” for skirting frank conversations about race. Holder’s remarks piqued white Americans who lauded their own forward thinking in voting for Obama, only to be called “coward” by Obama’s chief lawyer. (So much for racial catharsis!)

In that 2009 speech, Holder scolded America for “retreating to our race protected cocoons, where much is comfortable and where progress is not really made.” He darkly warned that if Americans continue to avoid meaningful racial debate, “the coming diversity that could be such a powerful, positive force will, instead, become a reason for stagnation and polarization.” His 2009 insight seems painfully prescient to Zimmerman’s acquittal and our present confusion.

The Secret Service calls the president “Renegade,” his agency nickname. It seems, these days, that Holder is the real renegade. The country's Rogue Negro. And the president’s repressed Black Id.

Who can blame Obama for not intelligently confronting race in this horrific dilemma? But we shouldn’t blame his top cop for doing so, either.

Since Salon and I have received a lot of feedback, some of it very upset, about this article, I’d like to take the time to respond.

First I want to express my extreme admiration for the president and for the attorney general, which I have stated publicly and to them personally. My autographed copy of "Dreams from My Father: A Story of Race and Inheritance" is one of my most cherished possessions.

Major thinkers, from Carl Jung to W.E.B. DuBois to Franz Fanon, have written about the internalized split or hybridized consciousness that conflicts humans. As such, what black person doesn’t understand duality and double consciousness, especially when s/he speaks to multiple publics and circulates in multiple contexts? This question of internal and externalized conflicts, to my thinking, becomes particularly poignant and urgent in this instance: Two of our country’s most powerful black leaders are speaking to multiple audiences in reaction to a horrific race-related event.

To speak of a person’s “inner child” is not to call that person a child. To speak of a person’s “inner diva” is not to call that person a diva. To speak of a person’s “inner nigger” is not to call that person a nigger. It is merely to wonder what aspect of that person’s outlook that person strategically covers. In his brilliant work "Covering: The Hidden Assault on our Civil Rights," New York University Law Professor Kenji Yoshino asks to what extent leaders “downplay a disfavored trait so as to blend into the mainstream, [because] all of us possess stigmatized attributes, we all encounter pressure to cover in our daily lives.” As Yoshina brilliantly illustrates, mostly in the context of LGBT rights, “covering” one’s reportedly negative “minority traits” has an insidious and detrimental effect on the long-term prospects of civil rights. My Salon article asks to what extent the president covers his race-based thoughts, and whether Mr. Holder is a surrogate, or an active proponent, of the president’s potentially more controversial, but productive, viewpoints. Does Mr. Holder provide the president “cover” for the president to express his opinions on this volatile topic, but in softer terms? Eric Holder has been much more vocal and active on issues of race during this administration; I do not “blame” anyone for this, but I do point it out.

Some Salon readers were upset by my use of the word “nigger.” I am not the first to use this term in public discussion, nor will I be the last. The term is in wide circulation in the streets, in private homes, in popular culture, in black-generated rap music, and in thoughtful scholarship, most notably in Harvard Law Professor Randall Kennedy’s exceptional tome, "Nigger: The Strange Career of a Troublesome Word." My use of the word isn’t haphazard or gratuitous. Language is central to race. Language has been central to Martin’s tragic death and to Zimmerman’s acquittal. Language is central to our implicit and explicit racial biases. As a writer, evaluating speeches, by two capable and eloquent public servants, I use the word “nigger” with deep understanding of its long, complicated existence.

As someone who has traveled the country extensively talking to people about their racial viewpoints, and in turn has conversed with people about race and those findings, I’m sensitive to the complexity that such discussions bring. As someone who has been called “nigger” affectionately and violently, I do understand firsthand readers' concerns with that term.

At any rate, this is an important debate, and I am grateful for the feedback, the better to contribute to the discussion.