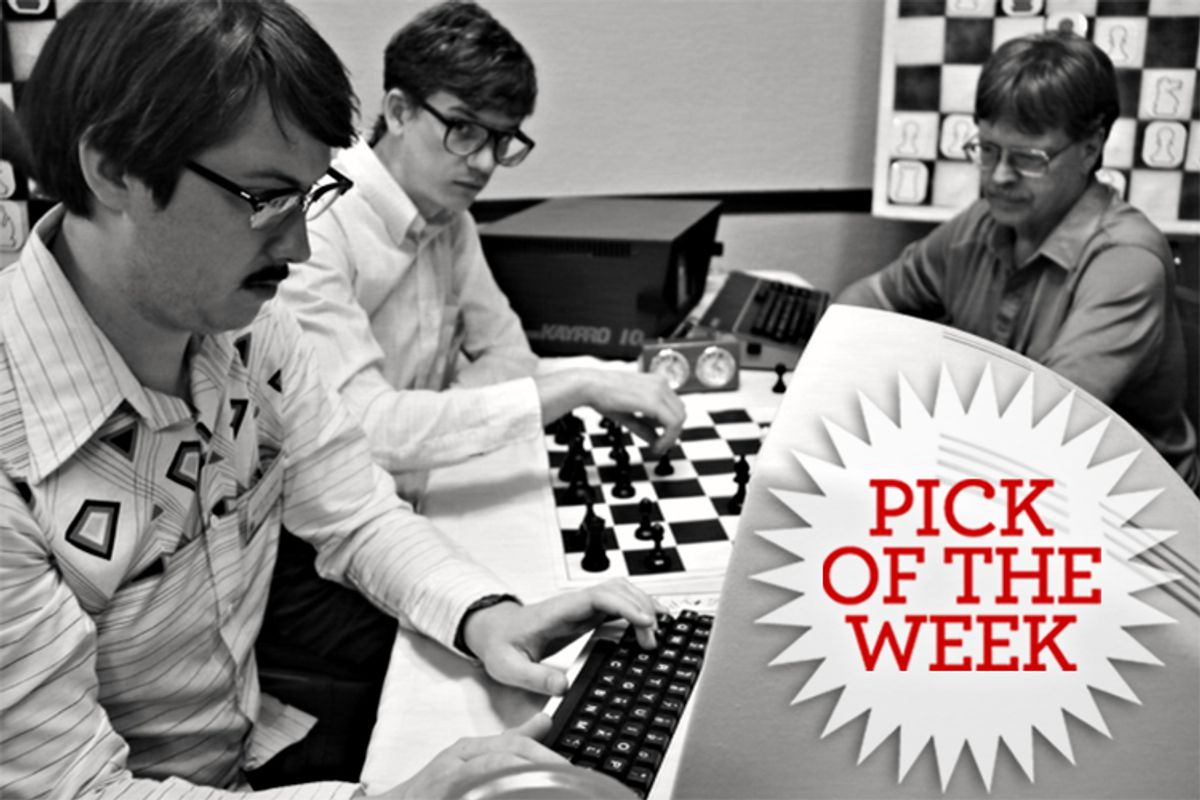 It’s easy to describe the superficial allure, or maybe anti-allure, of Andrew Bujalski’s film “Computer Chess”: It’s mostly set at a suburban chain motel in the early 1980s, and was shot in black-and-white using a video camera from that period. (“Black-and-white” is a term of art in this case, since the deliberately unlovely, squarish on-screen image is all different shades of dishwater gray.) This turned out to be a difficult undertaking. Since you can’t reliably find tapes or a working tape deck from that era, the video was recorded to a hard drive. If you really want to be a purist about it, this movie is faux-low-tech rather than the real thing.

At times “Computer Chess” presents as a fake period documentary, shot by a wandering cameraman surveying the awkward personal interactions and machine-versus-machine combat at a weekend convention of chess software programmers. Presiding over this gathering is a human chess master played by film-studies professor and movie critic Gerald Peary, who makes his acting debut with garrulous charm. (Like almost everyone likely to review this movie, I know and admire Peary.) Dot-matrix text sometimes comes crawling up the screen – pale gray in a darkened box – to document bullet points in a panel discussion, or annotate chess matches. This is 15 years or more before the fateful day when IBM’s Deep Blue computer first defeated chess champion Garry Kasparov, but these people, with their refrigerator-size homemade computer arrays, bad haircuts and poor social skills, are the ones who can see that day coming.

Furthermore, they’ve been thinking a lot about what the advent of “artificial intelligence” might mean. One of the themes I see in “Computer Chess” is a wondrous appreciation of the fact that the technological pioneers of 1980, who were so often viewed as marginal weirdos by the larger society, were asking profound questions about consciousness, intelligence and the nature of being. Many of the non-actor cast members in “Computer Chess” are people who bring an authentic understanding of computers and technology that Bujalski, by his own admission, does not possess. Gordon Kindlmann, a professor at the University of Chicago, plays the standoffish guru behind one team of programmers, while James Curry, a British-born software developer and game designer (for Karakasa Games of Austin, Texas), plays a fast-rising rival.

But Bujalski – previously the director of “Mutual Appreciation” and “Funny Ha Ha,” underground hits of the mid-2000s “mumblecore” moment -- is not making a mockumentary but an ambitious art film, driven by an agenda he has described as not quite conscious. He slips free of the framing device whenever he wants to, just as he slips free of strict period realism. A focal point of this narrative slippage is Mike Papageorge (Myles Paige), an independent software programmer with a bad attitude who sees himself as vastly superior to all these nerds, but has somehow failed to secure his own room at the inn. Mike wanders through the Ramada corridors like an unhappy ghost, communing with the humming soda machine in the small hours and catching a few Z’s where he can: On other people’s floors, in the stairwell or the lobby, under a table in the conference room.

This last strategy, however, puts Mike in collision with the other group using the hotel this weekend, a spiritual-sexual couples’ therapy retreat presided over by an African evangelist. Mike is born again, in a distressingly literal fashion, while another protagonist, a nervous young programmer named Peter (Patrick Riester), is lured into the room of a suspiciously friendly older couple. While there’s certainly a satirical element in Bujalski’s portrayal of both the computer-chess mavens and the middle-aged spiritual seekers, he’s doing something far more delicate than making fun of them. He’s suggesting that our search for the sacred, for the frontiers of knowledge and the doors of perception, takes many forms. Demonstrating flawed chess software for an audience of 15 people, or playing sex games with other people’s partners, might strike many of us as silly or pointless. But both also require curiosity and bravery, which are what drives the human species forward toward ambiguous ends.

Mike and Peter indeed find themselves transformed by these odd intersections. Mike leaves the hotel and briefly finds himself in a color movie, while Peter appears to discover that his chess software possesses a higher degree of intelligence than he or anyone else expected. Mike’s Virginia Woolf quest for a room of his own ends in comic and possibly mystical fashion, while Peter makes it about 5 percent of the way toward getting an actual girlfriend (Robin Schwartz), in the form of the only human female at the computer-chess convention. There’s even a shadowy hanger-on (played by novelist and journalist Jim Lewis) who may be a drug dealer or a CIA-NSA-type spook or both. That’s just one of the many ways that this profound, peculiar work of genius, this half-comic portrait of the present in embryo within the past, reverberates with hidden meanings and a questing intelligence.