Dan Savage: Homophobia's not going away 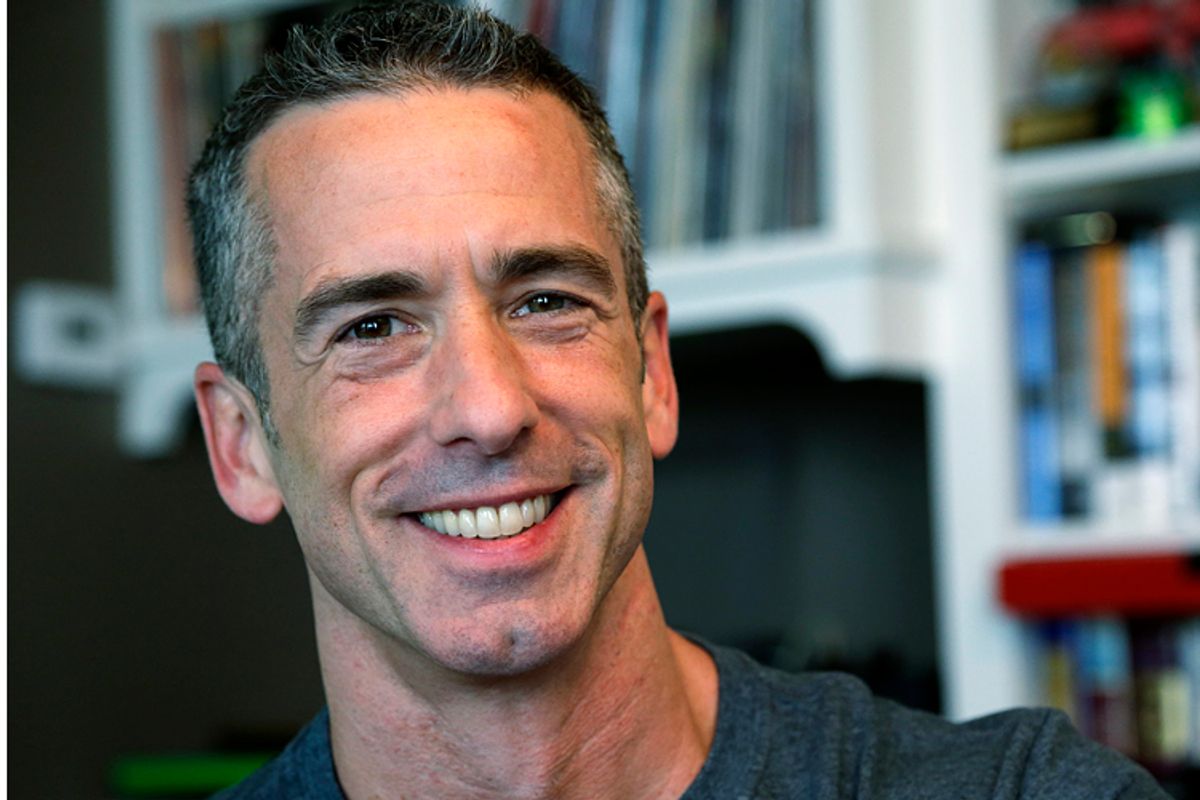 Writing a sex advice column sounds like a fun gig, but not a stepping stone to media domination.  Dan Savage started penning "Savage Love" in the early 1990s; two decades later it and his weekly podcast still celebrate the variety of sexual experience. But he's also, in the words of journalist Mark Oppenheimer, "the first gay celebrity," one who's known as a diplomat between the gay and straight worlds, a father, a husband and a prominent critic of the religious right. Except for pornography, he's probably the biggest influence on what Americans do in the bedroom.

Savage, who just published a new book, "American Savage," spoke to Salon a few days after the Supreme Court's landmark decision striking down the Defense of Marriage Act. When the history is written, the ruling may look like the most important victory of the gay rights movement. Savage described himself as "elated" but said the fight has more to achieve.

He discussed the future of homophobia, his favorite conservatives and the best way to hear less about gay people. This interview has been edited for space and clarity.

How do you see marriage equality moving forward?

There’s going to be lawsuits, and there are going to be fights. It ain’t over, but I think the most important development we’re seeing post-DOMA, is a swing in the polls in favor of marriage equality. And a lot of that movement, I think, is coming from people who, in their heart of hearts oppose it, but are now ready to give up. Call them the Orson Scott Cards of America. What’s sinking in is that we want equality more desperately than they want to deny it to us. We want equal justice under  the law more than they want to continue to see gay people marginalized. And the fight will continue until we win.

This is something that I encouraged my friends who are phone-banking [in Washington state] to say to people who are against marriage equality: If you don’t want to hear any more about marriage equality, then let us have it. The quickest way to get this out of the news is to give us everything we want. And then you’ll live in a time when you’ll hear so much less about gay people. If you go to Canada, you don’t hear very much about gay people and gay marriage, because we got it up there. And so it’s a non-issue. For a lot of people who oppose marriage equality, I think a lot of them are coming around to the realization that if what they don’t want to have to do is have conversations with their kids about the existence of gay people, then they should get the fuck out of the way of marriage equality.

Are you worried about, a loss of enthusiasm after what was probably a high point at the Supreme Court?

Decades after the civil rights movement, racism is considered totally unacceptable among politicians but --

We don’t get dog whistles and code words still —

Right, but 40 years after Roe v. Wade, there’s obviously a huge amount of energy invested in opposing abortion. What do you see as the future of homophobia in this country?

It’s not going to go away, seeing as it’s rooted in thousands of years of religious superstition, religious persecution and religious misconception. We’re likelier to end up being the new abortion. You’ll still see homophobia out there, and you’ll still see people trading on and playing on it. It seems to be paying fewer dividends, though. There’s been a very muted response among Republican officials about the DOMA decision.

The difference between, I think, abortion and gay marriage is that a lot of people have gay and lesbian friends and family members who are out. And so it isn’t some abstraction about life, or when life begins, or conception, or transvaginal ultrasounds. It’s about Rob Portman’s own son; it’s about Dick Cheney’s daughter. And that flips people — that flips whole families and communities, when people are out.

I think we need a movement for people who’ve had abortions and accessed that constitutional right, to be out about it. Most people who’ve had abortions are not out about it, because that might change people. But an abortion is an event in someone’s life. A gay child, relative, friend, neighbor, parent, uh, is not an event in your life. It’s not one thing that happened to you once upon a time. It’s someone that you love; it’s this person. It’s who they are, and who they love. And so I don’t think it’s going to be as easy to wage a campaign against same-sex marriage, or LGBT civil rights, in the same way they’ve been able to demagogue and wage a campaign against abortion rights, which is not to say that it’s ever going away.

Abortion and women’s reproductive freedom, and the freedom of sexual minorities are intrinsically linked. It’s ultimately about the right to control your own body and the right to non-procreative sex, and sexual pleasure, and what sex is and isn’t. If I may sound like Newt Gingrich for a second, “this fundamental misconception” that right-wingers and social conservatives have about sex, is that sex is for procreation, which is why we’re now seeing the movement against birth control.

The biological fact is human beings have a thousand sexual encounters for every one live birth. We have sex primarily for non-procreative reasons, for emotional and social reasons, and they can’t reconcile themselves to that, and I don’t know if they ever will be able to reconcile themselves to that. The fight will never be ultimately resolved here. But I do think, again, our secret weapon here, is that we exist not as an event in someone’s life, like an abortion, but as a life.

Why do you think demagoguing against sex for pleasure is still an effective tactic for politicians?

Because a lot of people are afraid of sex. And they should be afraid of sex. Sex is scary. Sex can kill you dead. Sex can derail your life. Intimate partner violence is a huge problem. Sex can invite a lot of chaos and drama, and create a lot of chaos and drama. We do need to be thoughtful about how we approach sex, and sex does need to be, to some degree, constrained, but by each of us as an individual in our own lives. We need to set our own limits and make wise choices on our own, but some people externalize that conflict, and that understanding that sex can be a tremendous generator of chaos, and drama, and pain and conflict, and rather than be satisfied with controlling themselves and helping to create a culture where people are empowered to make their own informed choices, and be safe, they want to impose control on others.

It’s just externalizing that internal battle each of us has to go through to create parameters for ourselves, to impose some self-control sexually. And there’s these other people who [invoking religion] take that internal necessary struggle, and want to impose control and order on everyone else, and it doesn’t work and it’s never worked.

In your column and on your podcast, you’ve covered a wide swath of the American sexual experience. Is there anything you feel you haven’t managed to address?

Oh God, I don’t know. You know, I’m already perceived as the enemy of monogamy, which is not true. I think if monogamy is what you want and it makes you happy, you should go for it. But, I’m just buried every day under emails from people whose marriages are miserable and unhappy, or whose relationships are miserable and unhappy. And the shtick that we’re all supposed to perform, all of us in the advice industrial complex, is say if you just tinker, if you just did the dishes, if you helped out more around the house, if you had a date night, if this and that, then the sexual fires would start burning again. The data and the research all shows that that’s kind of a lie. (laughter)

Familiarity breeds a sort of sexual complacency and boredom, and you can have a long-term loving commitment, or you can have a kick-ass, sort of exciting sex life, but it’s very rare to have both at the same time. But people in long-term relationships are told there’s something wrong with their relationships if they don’t have both at the same time, which then undermines otherwise serviceable, perfectly lovely long-term relationships, and leads people to divorce or break up, when probably they just need is a little monagamish latitude, license, but the culture can’t wrap its head around that.

You’ve been hammering at this for a while. Do you see, from your mail bag, or from your voice mail, that it’s working?

Well, it’s certainly more of a topic of conversation than it was 20 years ago when I first started writing my column. The danger for anyone in my business, writing an advice column, is you don’t get letters from anyone who is happy. You don’t get letters from people whose sex lives are working, and content. They don’t write you to say, “Oh, everything’s good.” Your samples are skewed toward disasters, and unhappiness, and you have to bear that in mind when you generalize.

But, I do hear from people who have embraced sort of a more realistic attitude about what commitment means. Twenty years ago in my column, I said that we’ve all been sold this lie: that if you’re in love, a monogamous commitment comes easy, that love means you don’t want to fuck other people. I said that’s not true.  A monogamous commitment and love means you will refrain from fucking other people, but you’ll still want to fuck other people. That was considered explosive and dangerous when I said it. And I think everyone kind of gets that now.

I hope that there’s a more user-friendly, sophisticated attitude toward monogamy and commitment. People can acknowledge that for both of you, it’s going to be a bit of a struggle, and involve a bit of a sacrifice. And shouldn’t that be honored? Isn’t that more valuable, when you can look at a person and say, “They really want to fuck other people, but because we love each other, and because monogamy’s important to both of us, we both refrain from doing that … that’s a gift we give each other.”

But are there any opponents of same-sex marriage who you consider worthy adversaries, or at least respect as people who come honestly to their views?

This is setting a really unfair standard, and will make Maggie Gallagher’s head explode, but the best measure of someone’s, sort of, thoughtful, rational opposition to same-sex marriage is their ability to come around and change their mind about it.

There were people like David Frum who said, you know, “slippery slope, and unintended consequences, and this is a great unknown, and no one can predict how this will play out and what will happen.” And then, he was willing to look at Canada and Spain and other places that have marriage equality, and states like Massachusetts, after marriage equality was achieved there, and see that his fears were unfounded and changed his position.

So, you know, you think of someone like Brian Brown. He is never going to come around on marriage equality because he is, not just an ideologue, but this is for him about imaginary sky friends and what Jesus wants.