Free Willy, for real: SeaWorld has got to go

Can the movie "Blackfish," and the gruesome death of a SeaWorld trainer, end the imprisonment of killer whales? 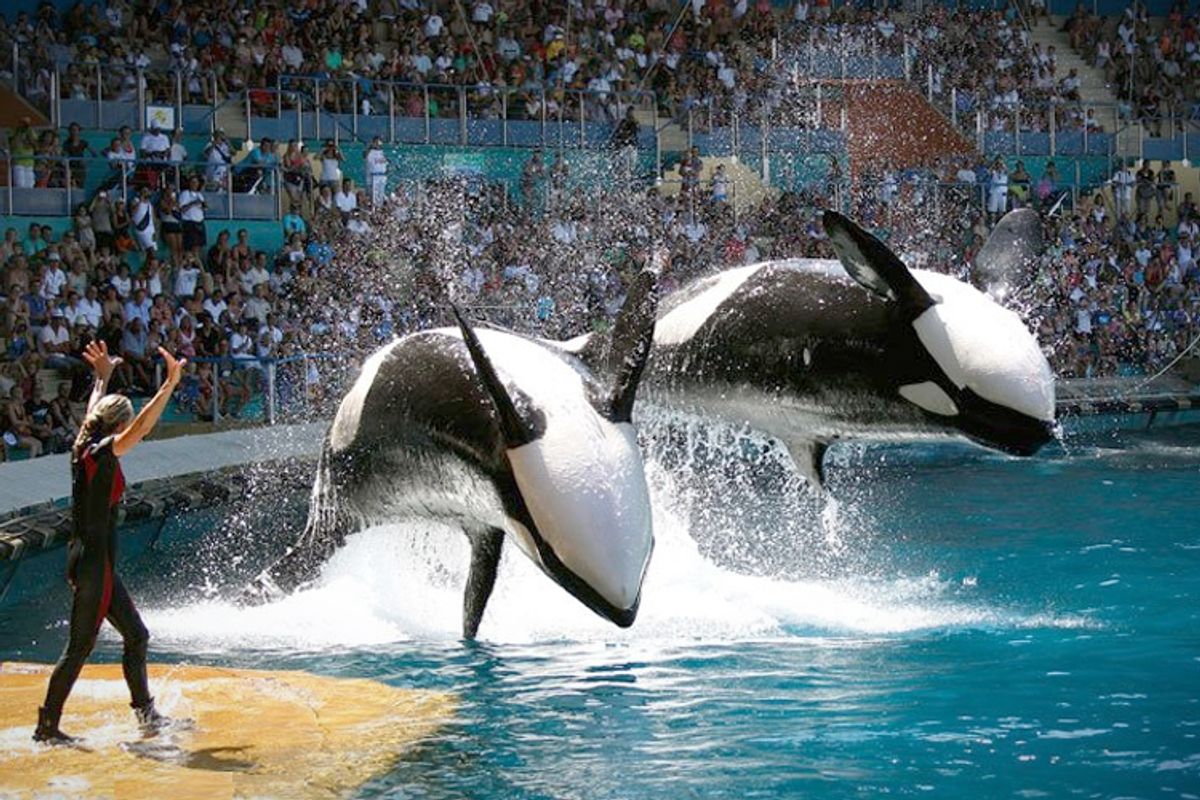 No spokesperson for SeaWorld, the venerable American chain of oceanariums and marine mammal parks that owns almost half of the world’s captive orcas, or killer whales, ever appears on camera in Gabriela Cowperthwaite’s devastating documentary “Blackfish.” SeaWorld is quite right to view “Blackfish” as an existential threat, since the film attacks not just the parks’ wholesome public image but also the basic morality of their business model. In a time-honored but dubious maneuver, SeaWorld declined to cooperate with Cowperthwaite (who spoke to Salon's Daniel D'Addario this week) in any way during the making of the film but then launched a vigorous P.R. counteroffensive before the movie had even reached theaters. Most of the disputed issues in the film are relatively minor, and on the semiotic level, the meaning of all this is clear: This is what big companies do when they have something to hide and a lot to lose.

“Blackfish” is a highly compelling film that’s already being touted as a likely Oscar contender. It uses the gruesome 2010 death of a SeaWorld trainer named Dawn Brancheau, and the troubled life history of a six-ton bull orca named Tilikum – who drowned and partly ate Brancheau, and has apparently killed two other people – as the starting points for a disturbing and much larger story. Through extensive interviews with former SeaWorld trainers, scientists and marine-mammal experts, Cowperthwaite builds a portrait of an intelligent but profoundly traumatized animal who was taken from his family in the North Atlantic as an infant, and has been driven to anger, resentment and perhaps psychosis after spending his life in a series of concrete swimming pools.

At least in Cowperthwaite’s telling, Tilikum is just a symbol of the numerous problems involved with keeping these large and intensely social predators in artificial groups and artificial environments, where they’re trained to perform a variety of unnatural stunts. (In the email sent to film critics by SeaWorld’s P.R. firm, we are assured that the actions seen in a killer whale show – jumping out of the water to touch a ball, giving a wetsuit-clad trainer a ride on its back, and so on -- are within the animal’s “natural range of behaviors,” whatever that means.) There are only believed to be 46 orcas living in captivity – 22 of them in SeaWorld’s parks in Orlando, San Antonio and San Diego – but even beyond Tilikum, there have been numerous incidents of whales attacking and injuring trainers and visitors at marine parks. (You’ll see some hair-raising home video scenes in “Blackfish,” but none depicting actual death.) Despite the species’ name, there are no documented cases of a killer whale ever killing or seriously injuring a human being in the wild.

Orcas in captivity have also attacked, gouged, raked and sometimes killed each other with distressing frequency. In SeaWorld’s response, this is described as natural and perhaps unavoidable behavior, the establishment of dominance hierarchies. Hierarchy enforcement definitely occurs in the wild, but in that context a whale who loses a fight can always retreat into the endless ocean instead of being subjected to repeated injury, as Tilikum apparently was by the female whales who arrayed themselves against him. According to Cowperthwaite, no whale expert has ever seen or reported evidence of one orca killing or seriously injuring another in the wild, either when observing living animals or examining dead ones.

As for the film’s assertion that orcas in captivity lead much shorter lives than in the wild, and demonstrate obvious physical disabilities – like crumpled or collapsed dorsal fins – that are almost never seen in wild whales, it’s abundantly clear, from the video segments seen in the film, that SeaWorld has misled its visitors about these issues for years. SeaWorld’s response finesses the lifespan question by noting that the oldest orca in their collection is in her 40s and they can’t possibly know how long she and others will live. That’s fair enough, but the larger point is that wild orcas are known to live human-scale lives of 50 to 90 years or even longer, while very few animals in captivity make it to 30.

No doubt pursuing the dictates of SeaWorld’s lawyers, the P.R. response focuses considerable attention on the details of what happened between Tilikum and Dawn Brancheau on that February day in 2010. “Tilikum did not attack Dawn,” the letter states. I don’t know what other verb to use to describe an episode in which a whale submerged, dismembered and partly devoured someone – don’t worry, this does not happen on screen – but SeaWorld contends that Tilikum “became interested in the novelty of Dawn’s ponytail in his environment” and used it to pull her into the water.

First of all, this appears to contradict all the available evidence and eyewitness testimony, along with the fact that nearly all the female trainers at SeaWorld wore their hair in ponytails. Much more important, this is an obvious effort to deflect the question of whether Tilikum had become unbalanced or homicidal from the long-term stress of captivity. One issue may be that while captive animals who kill or injure humans are routinely euthanized, SeaWorld wants to avoid that for many reasons. As a bull orca and established breeding partner (many of SeaWorld’s younger whales are his offspring), Tilikum is a rare and immensely valuable commodity. SeaWorld management is also eager to reverse an OSHA ruling that followed Brancheau’s death, which currently requires trainers to avoid all direct physical contact with killer whales.

While “Blackfish” largely focuses on the tragic story of SeaWorld, Brancheau and Tilikum, the philosophical issues it raises along the way are much broader. As the experts in the film make clear, the more we learn about killer whales, the more we come to understand them as self-aware creatures possessed with high-level cognitive abilities, complex family and social structures, and distinctive forms of communication. While the word “language” remains contentious when applied to whales and dolphins – having been used too promiscuously by New Agers in the ‘70s -- in recent years leading scientists have begun to talk about cetaceans possessing “culture,” as well as the psychological and emotional inner lives characteristic of “personhood.” In the film, evolutionary neurobiologist Lori Marino suggests that orca brains demonstrate a limbic system – the apparent seat of emotional life – more complicated than that found in humans.

As our awareness of the complexity of the animal world continues to evolve, and as the expanding human population puts the planet’s other inhabitants in greater danger, certain questions become irresistible. If we come to believe that orcas and other large marine mammals are conscious beings, individuals not unlike ourselves, then by what right do we arbitrarily abduct and imprison them for our entertainment? Or even, as SeaWorld would have it, for our education, for the advancement of science and for the furtherance of conservation efforts? One could argue that when Africans or Native Americans were kidnapped from their homelands and put on display in the great cities of Europe, it ultimately served to broaden human understanding. That doesn’t mean anyone would defend that practice today.

In the wake of “Blackfish” and the 2009 Oscar winner “The Cove,” which depicted the horrific annual slaughter of dolphins in Japan that accompanies the collection of animals for SeaWorld and other parks, the decades-old movement to ban the capture of wild cetaceans and close the existing marine parks has a renewed popular momentum. There have been no such parks in Britain, with its highly organized animal-rights movement, since the early ‘90s, and the entire European Union may follow suit within a few years. Two or three generations from now, people may look back at the practice of keeping orcas in pools as performing animals with the same incomprehension we feel toward bear-baiting, a favorite spectator sport of Elizabethan England.

But of course the philosophical questions about our treatment of captive animals don’t begin or end with marine mammals just because we believe them to be unusually intelligent. Can we justify training big cats and elephants as circus animals, or exhibiting them in zoos and wildlife parks? Is it still scientifically necessary (presuming it ever was) to use chimpanzees, our closest primate relatives, as research animals? That too seems to be a practice that’s winding down, in historical terms. What about sea lions in outdoor pools, sideshow capybaras, pet pythons or the European harvest mice my daughter adores so much at the Bronx Zoo? Once we decide that SeaWorld and places like it have had their day, and that it’s not acceptable to keep orcas confined in swimming pools for years on end just because it’s cool to see them jump, does the slippery slope lead all the way to PETA, Peter Singer, absolute animal rights and universal mandatory veganism?

It’s not an entirely facetious question, and while I’d argue the answer is no, it’s more like no with an asterisk, or no for now. To cite a parallel example, most Americans have evidently reached the view that they’re OK with two men or two women getting married. But despite the tirades of reactionaries, there is no sentiment toward legalizing polygamous or polyamorous marriages, or for allowing people to marry their cats. Human mores evolve and change; they aren’t scientifically defined and always rest on a Potter Stewart-style “I know it when I see it” imprecision. Bear-baiting used to be fun, and sodomy punishable by death. These days, zoos are pretty much required to express an environmental or scientific mission, and to make some effort to emulate a natural setting. (If you ever visited the barren and depressing Central Park Zoo of the early ‘80s, with its cement-floored cages and infamous OCD lion, you probably still bear the scars.) We are recalibrating our relationship to captive animals on many levels and in many ways, and it’s only natural that we pay attention to the largest and most intelligent mammals.

Marine biologist and conservation pioneer Victor B. Scheffer, who was the first chairman of the federal Marine Mammal Commission in the 1970s (and who died in 2011 at the impressive age of 104), supplied an ethical framework for thinking about these issues that I find extremely useful. Scheffer was an early exponent of the idea that all animal life, our own species included, is “caught up together in a sort of spiritual biomass.” We had a right and a responsibility to insist that our fellow animals not suffer unnecessary suffering, he wrote, and also “that they be used in ways acceptable to large numbers of thoughtful men and women.”

That standard is a moving target, always subject to change. For better or worse, most people are still OK with raising domestic animals for meat, milk, eggs, wool and so on. They’re OK with pet gerbils, turtles and Schnauzers. They don’t have a problem, at least for now, with at least some kinds of animals being kept in zoos, probably including my daughter’s beloved harvest mice. Those animals are still judged to be useful where they are. But when it came to whales, dolphins and other marine mammals, Scheffer believed, the view of usefulness had shifted: “I myself believe that what men and women are saying today about them is, ‘Let them be.’ A useful marine mammal, they say, is one out there somewhere in the wild – free, alive, hidden, breathing, perpetuating its ancient bloodline.”