Why are women deserting newspapers? 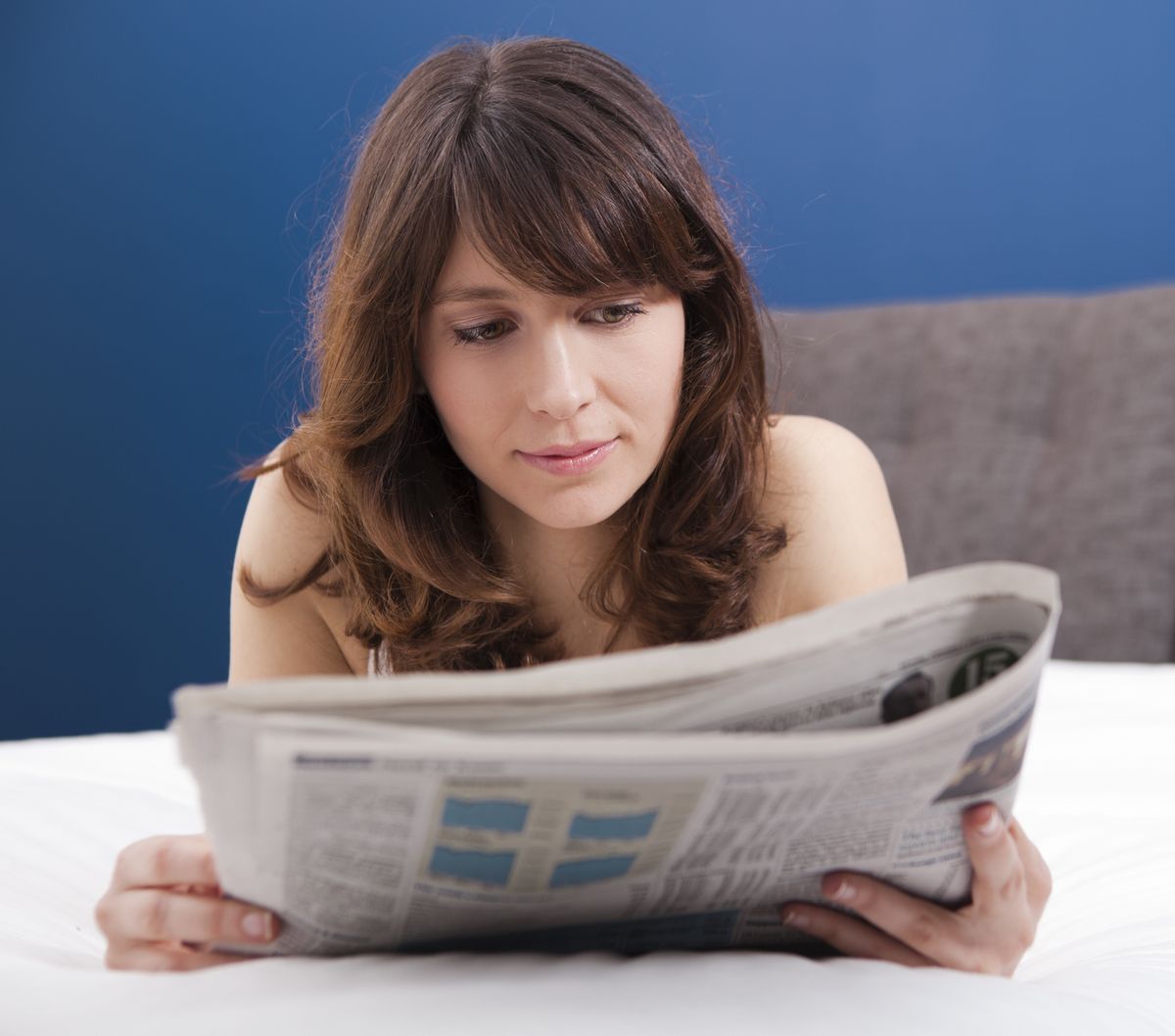 News of a U.K. government study that claims women are less informed than men about current affairs, particularly in liberal, egalitarian western countries, has been making the rounds, much to the irritation of my female friends and colleagues.

Not me. I expect it's true. I've long observed the demographics of newspapers -- the best source of information on what usually constitutes "current affairs" -- and they tell us that the majority of women don't give a damn about what the sort of straight, white, wealthy middle-aged men who run corporate papers have deemed newsworthy.

Women readers make up only about one-third of the ever-shrinking audience for corporate newspapers, and they have been disappearing much faster than male readers since the circulation decline began in the 1970s. Since women readers were the reason for the newspapers' legendary license to print money, there was much sturm und drang over their exodus. And many elaborate theories explaining the problem came from journos and market researchers alike.

But I think this headline from the London Times about Wimbledon earlier this month explains it best: "Murray ends 77-year wait for British win."

It seems innocuous enough to note that Scottish men's singles champ Andy Murray took the tennis prize. Well, until you realize that an English player, Virginia Wade, won Wimbledon in 1977. In fact, as the Guardian reported, she was only the most recent singles champ to take the prize. Three other British women had won Wimbledon after the last man in 1936.

In Twitter, a New York-based feminist blogger Chloe Angyal noted that, "Murray is indeed the first Brit to win Wimbledon in 77 years, unless you think women are people."

I was on one of my regular attempts at a digital media fast (yet another failure; I lasted 2.5 days) so I heard the story on CBC radio news, long after Angyal's acerbic tweet began bouncing around the web. But I'd been an avid tennis player as a teenager and remembered Wade's win. I recalled her as English but perhaps my memory was hazy? Had she played for another country? South Africa?

It's the sort of question that scampers across the brain of copy editors. Or rather, used to, in the days when the desk would check a reporter's confidently delivered views if they conflicted with the facts in said editor's head. And their heads were gloriously filled with random facts. It's no accident that Trivial Pursuit was invented by copy editors from Montreal.

But I didn't have time to check, and I didn't have my suspicion confirmed until later in the day when friends were muttering about the gross decline in journalism standards. (A favourite topic in my circle.) How had major outlets like CBC continued repeating the false story so long after it was pointed out that the Times et al got it wrong?

I agreed that the cutbacks, which target senior staff, probably played a role. Had any of the sports editors on the desk of any of those big British papers been old enough to remember Wade, that might not have happened.

Although I suspect that the real problem was that none of the sports editors was female enough to remember Wade.

I remembered her because I'd been a tennis-playing kid and which woman won Wimbledon mattered to me. Did it matter to the largely male-dominated sports section?

What women want (to read)

I'm never sure if it's ironic or merely stupid that the readers advertisers want most -- women -- are the same ones newspapers have been aggressively driving away since the 1970s. The problem isn't exclusive to newspapers, of course. Joanne Thomas Yaccato, a Toronto marketing consultant, sums up the problem nicely in the title of her 2004 book, The 80% Minority: Reaching the Real World of Women Consumers.

While women do most of the shopping for most products and at least half of the buying on supposedly male products like cars, computers, and sports equipment, business tends to cater to men. They treat women as a minority and an afterthought.

While this may have always been true of most businesses it wasn't always true of newspapers, which got rich on serving women readers. Women were presumed to have no interest in news since they couldn't even vote until 1920ish. But they shopped. And retailers -- particularly that newfangled department store that boomed after Victoria took the throne -- wanted copy that hooked them.

Eventually the stories tailored to attract women readers became part of sections with names like "Ideas," "Life," "Arts & Entertainment." But before the sections sprang up and newspapers began to deliver advertorial and ghettoize certain types of coverage, there were human-interest stories and long features that ran over weeks. And book excerpts. Theatre reviews. Travel articles. Fiction. You also found what was called "women's club news" but they weren't reporting on afternoon teas or bridge games. Women were lobbying for the vote from about 1850, and they formed clubs of all sorts to pester politicians on any number of social reforms.

The reporters who covered them were hard news reporters -- they were covering politics -- but because it was women's politics, they were "club correspondents." It is only news, of course, if the white, straight, middle-aged men tell us it is.

When the so-called women's pages arrived in the late 19th century, it was part of the newspaper strategy to profit from their ability to corral women readers. Sure they were sexist and much of the copy featured spunky girl reporters involved in stunts. Sara Jeannette Duncan, Canada's first full-time woman reporter, was hired by the Toronto Globe in 1883 and in 1888 she and another spunky girl reporter, Lily Lewis, spent two years traveling around the world and writing about their adventures. While readers of the day were keen on travel articles from exotic locales, the fact that women were doing it intrigued those valuable women readers.

People like to see people like themselves reflected in the newspaper's pages, was one of those truisms taught to novice scribes. And women have always been the newspaper's bread-and-butter, so publishers who wanted to stay in the business of journalism took them seriously. That changed as the publicly-traded corporations began buying out newspapers in the 1970s. As a young reporter, I used to wonder why papers dumbed-down the content aimed at women and ignored women's genuine accomplishments in politics, business, and even sports.

To me, it looked like suicide. In the late '80s and early '90s I argued with more than one editor that tanking circulation suggested their high-priced marketing research might be wrong.

Studies of what women actually do -- as opposed to what market researchers think they do -- tell us that women are society's most committed readers (of everything but newspapers). They prefer the long, narrative reads found in magazines and books and the quality of the writing clearly matters to them. In another life, I liked to wave the StatsCan census of the moment under editors' noses. Pick any one in the last two decades and you'll find that men and women read roughly the same amount of non-fiction books, while women read twice as much fiction as men.

Women also have more formal education than men. Take those stats together and it suggests your female audience is smart and you'd better be writing up to them, not down.

About a decade ago, I pointed all this out to a journalism professor. He dismissed the stats saying, "Oh, they're probably reading romances."

For a moment I was slack-jawed. I was used to this sort of casual ignorance in newsrooms, but it surprised me in the academy. Was he really suggesting the women in the country that had made Margaret Atwood, Margaret Laurence, Alice Munro, and Carol Shields household names and international stars could only be capable of reading cheap genre fiction?

It echoed something I had heard again and again from a surprising number of editors (of both sexes) that can be summed up like this: if it matters to a lot of women, it just doesn't matter.

It's as if gaining the attention of women somehow taints a subject and renders it irrelevant in newsrooms. But if it matters to a lot of men -- think hockey trades -- it's news.

Which is why I have no doubt that the British study that shows women are less well informed of "current affairs" than their countrymen is accurate. And that's because media managers have spent decades telling women that stories like "Murray is the first Brit in 77 years to win Wimbledon" are what constitutes current affairs.