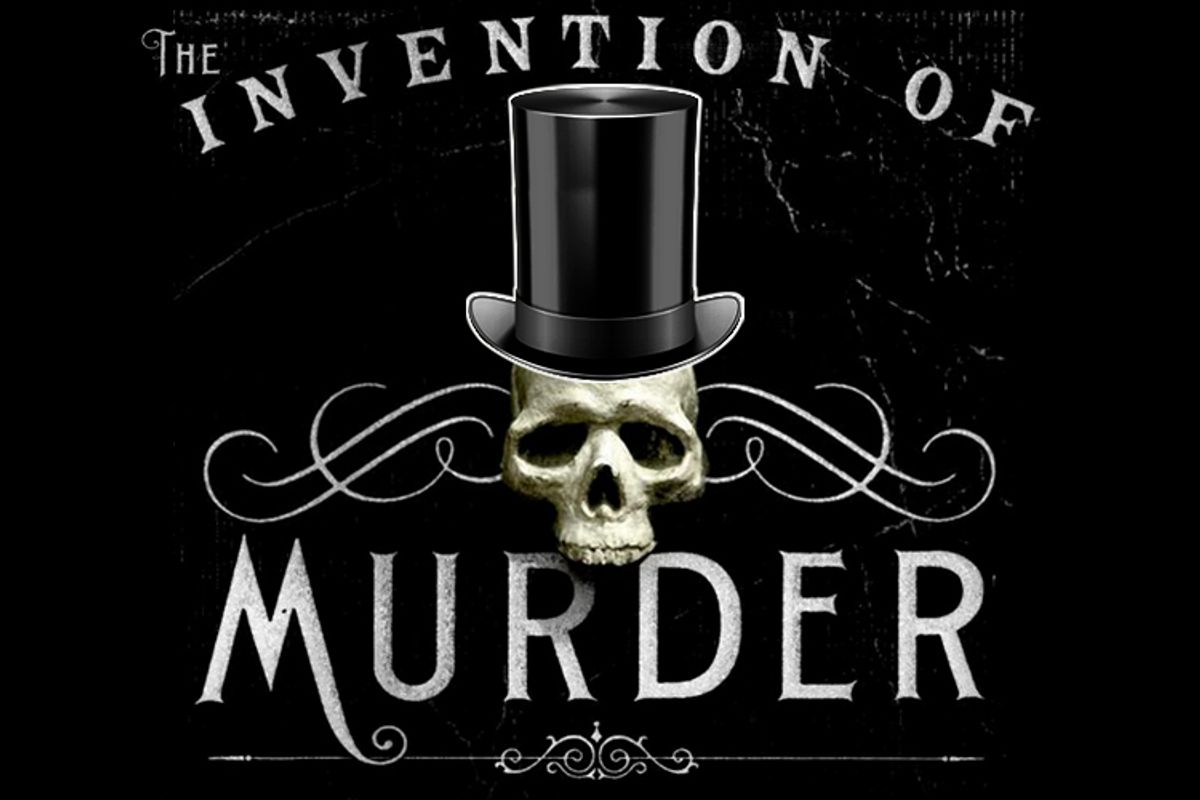 "There is such a grand murder in the paper," says a well-bred elderly lady in Emily Eden's nearly forgotten 1859 novel, "The Semi-Detached House. "A whole family poisoned ... It is really very interesting and I like a good murder that can't be found out; that is, of course, it is very shocking, but I like to hear about it."

She was very much not alone, as Judith Flanders' exhaustively researched but endlessly absorbing new book, "The Invention of Murder: How the Victorians Reveled in Death and Detection and Created Modern Crime," explains. Flanders recounts how true crime, specifically homicide, became an obsession in British popular culture during the 19th century, a theme for everything from traveling fairground puppet shows and wax museums to tourism, the theater and the novel. Running alongside her descriptions of some of the most notable or exemplary murders of the era is a history of detective fiction, as it evolved from earlier forms of entertainment and storytelling to become one of the most popular genres of the 20th century and beyond.

"The Invention of Murder" does not argue a major or provocative thesis; instead it's a panorama of strange and interesting information, such as the fact that in 1810, only 15 people were convicted of murder (out of a population of 10 million) in all of England and Wales. (That's a little more than 5 percent of the per-capita murder rate of the U.S. in 2007.) When someone was murdered in Britain, even in a scenario we might consider relatively unremarkable -- such as a confirmed criminal offing one of his confederates -- it was a big deal. The first such case Flanders covers in depth was the 1823 killing of William Weare, a professional gambler, by John Thurtell, another gambler and sometime prizefight promoter (reportedly crooked). Thurtell, with a friend, lured Weare out to the country and shot him, in the belief that he carried 2,000 pounds in savings on his person. (In truth, Weare had only 15 pounds.) The two men stuffed Weare's body in a sack and dumped it in a pond, moving it to another pond a bit later.

On this sordid crime, fortunes were founded, Flanders explains, because Thurtell's "was the first 'trial by newspaper.'" He was quickly caught, thanks in part to the Bow Street Runners, a "privately paid detective force" who worked for the magistrates of a London court and were in this case brought in by officials in Hertfordshire, where the murder occurred. At that time, Britain had no professional police force, just a patchwork system of local constables and night watchmen organized by local officials and limited in jurisdiction. There was, Flanders writes, "no civil force whose job included the prevention and detection of crime" until the Metropolitan Police Act of 1829. Although Thurtell killed someone he knew, the media and its ability to inform (and alarm) the public about "high-profile stranger-murders" helped overcome widespread resistance to establishing such a force.

Perhaps the deepest mystery Flanders contemplates in "The Invention of Murder" is what causes the public to become fixated on a particular homicide. Thurtell's crime, for example, exposed the seedy underworld of gambling and amateur boxing, but the readers of the dozens of newspapers that covered the case seemed equally intrigued by the peregrinations of Weare's body from pond, through hedge, to that second pond. Flanders' account of what can only be called the media circus surrounding the murder and its details establishes a pattern that will repeat itself over and over again in "The Invention of Murder."

First, there were the fountains of newspaper column-inches devoted to the most preposterous and unsubstantiated rumors about the perpetrators and victims, such as a yarn about Thurtell stealing 140 doubloons from the body of a fallen officer during the siege of San Sebastian -- a haul that would have been too heavy for any human being to carry. There were the broadsides: cheap, one-sheet reports, usually "produced sequentially for each crime that caught the public's imagination," emblazoned with the 19th-century equivalent of clip art (lifted from other sources and often completely unrelated to the subject at hand), and sold on the streets or posted in pubs and coffeehouses for customers to read. Both broadsides and the more-expensive newspapers typically featured "confessions" by the killers that accompanied the accounts of their executions, most of which were written by journalists before the condemned even set foot on the gallows. The executions themselves were public, and drew crowds in the tens of thousands, including such notables as famous writers (Thackeray, Dickens), politicians and the nobility, who paid for the spots with the best view.

Although they were admonished not to portray the accused as guilty before the verdict came in, playwrights and novelists seized on the murders of the day quicker than a "Law & Order" staff writer ripping a story idea from a headline. One thing you realize in reading a book like "The Invention of Murder" is that popular culture works much the same way no matter what technology it possesses. Annoyed about 24-hour cable news gabbling about nothing to fill airtime between actual news developments? Well, here's an announcement from the Evening News of London in 1888: "The Exchange Telegraph Company, on inquiry this morning at Scotland Yard, were informed that no arrests had been made in connection with the brutal murder at Whitechapel up to eleven o'clock today."

As for the public itself, the curious mobbed the scenes of notorious murders (where the victims' bodies were frequently left in situ for purposes of identification). People eagerly bought the personal effects of both killers and their victims; pieces of the sack in which Weare's body was stuffed were particularly in demand, and the hedge outside the cottage where the killers had stayed (and were overheard plotting) was stripped of twigs by souvenir hunters. Race horses were routinely named after famous murderers. Even weirder, Staffordshire potteries cranked out china figurines of not only the principal players in each crime, but also of significant buildings. The infamous "Red Barn" where William Corder bludgeoned Maria Marten, an inconveniently poor young woman he'd seduced and promised to marry, was depicted in porcelain as "impossibly bucolic, and frequently with Maria Marten looking winsome in the doorway." (That'll be a nice touch on the parlor shelf.) Nor was this ghoulish fetishism limited to the gawking public; a hospital official reputedly had Corder's skin tanned and used to bind a copy of "The Trials and Memoirs of Corder," a book that was almost certainly not written by Corder himself.

Theaters especially loved crimes like the Red Barn Murder because they could be readily adapted to established commercial formulas. Those templates, in turn, shaped how the crimes themselves were reported and discussed. Corder, "a modestly prosperous tenant farmer," became, in the public imagination, a "rich squire" while Marten was portrayed as an "innocent village maiden" of melodrama -- despite having two illegitimate children by two different men before she met him. The Victorian equivalent of pulp novelists would do much the same, seizing on the legend that Marten's stepmother learned of the corpse's location in a dream. High-minded literary types also liked to rewrite history. The poet Thomas Hood utterly transformed the real-life Eugene Aram (a "ruffian who killed a fellow criminal when dividing up their spoils" in 1745) into a tragic "reclusive genius-scholar" who endured a guilty conscience for years until his deed was finally discovered.

While some of this mythologizing was merely ridiculous, the tendency to impose prefabricated notions on real-life events could also be lethal and oppressive. Above all, class prejudices dominated how both the public and officials interpreted events, sometimes to the point of paranoia. In a grim chapter titled "Panic," Flanders describes how, in the 1840s, much of the middle class became convinced of an outbreak of poisonings perpetrated by working-class women.

Several servants, by all appearances innocent, went to the gallows on the flimsiest of evidence during this modern-day witch hunt. (There were some notorious poisoners at work in the mid-1800s, but the most predatory among them -- Thomas Griffith Wainwright and Dr. William Palmer -- were middle-class men.) An "expert" analyst named Alfred Swaine Taylor proved instrumental in many of these convictions, Flanders has found, even though his testimony was often laughable. "As always," Flanders writes of one case, "Taylor was prepared to commit himself on contradictory (or no) evidence. He therefore ignored the poison he had actually found and instead gave a judgement based on the poison he could not find."

Policing, detection and forensics did gradually improve during the 19th century. At the same time, as confidence in law enforcement (mostly) grew, the sensation-novel, which interposed shocking subject matter into ordinary middle-class settings -- Wilkie Collins, author of "The Moonstone," is the best-known practitioner -- developed a robust offshoot. "The sensation-novel was about buried secrets and their revelation," Flanders writes. "The detective novel is about the person doing the revealing" and how he or she does it. "The Invention of Murder" culminates and concludes with the century's most famous criminal, Jack the Ripper, and its most famous fictional detective, Sherlock Holmes. As Flanders sees it, each was "the product of the entire previous century" and each figure ushered in a new way of thinking about both murder and the stories we tell about it. The world of fiction might have come to feel a little safer and more orderly, but the real one? Not so much.