Why on Earth does Goldman Sachs own a coal mine in Colombia?

Big banks are increasingly operating their own commercial businesses. It's high time the Fed reigns them in 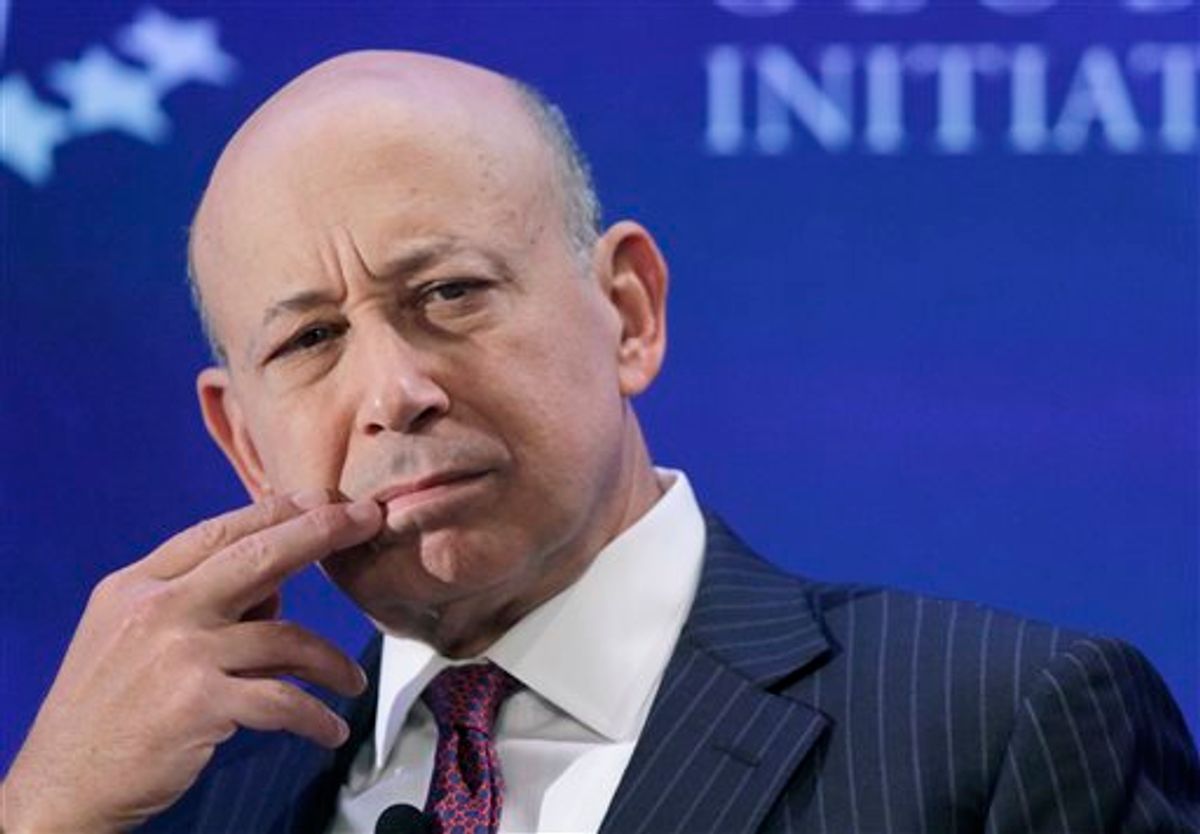 This piece originally appeared in Quartz.

In 1913, Congress determined that a cabal of Wall Street bankers had captured control over the US economy. Having bought up large shares of railroads, utilities, and manufacturers, these titans of finance had acquired the power to pick whether a business thrived or failed, and could effectively direct the nation’s commerce. “[I]t is fraught with peril to the welfare of the country,” wrote the Pujo Committee, the investigating body.

In the century since, banks have mostly been prohibited from direct involvement in non-banking activities—transporting and storing goods, for example, or running commercial businesses. But today, a handful of banks are back in the game of real stuff and services. Goldman Sachs, for example, owns a coal mine in Colombia and a giant metals warehouse in Detroit. Morgan Stanley owns and operates electric power plants outside Reno and delivers cargoes of liquefied natural gas to Argentina.

This fall, the Federal Reserve will decide whether to allow these two banks to continue owning and operating these businesses. Experts say that if Goldman Sachs and Morgan Stanley get their way, the result could vastly expand the reach and influence of the entire banking industry—even as lawmakers hustle for ways to rein in these same giants.

The banks stand to gain the most rights in markets for essential commodities, like oil, gas, metals and electricity. Over the last decade, the Fed has allowed a handful of commercial banks to directly enter these industries, largely through circuitous back road legal processes. Its decision in this instance could open a highway for everyone.

“This would concentrate even more power among a few,” said Saule Omarova, a professor at the University of North Carolina at Chapel Hill School of Law and author of “The Merchants of Wall Street,” a seminal paper on the legal and policy implications of banks’ physical operations. “What we have here is essentially the same story as J.P. Morgan controlling railroads and infrastructure in the early 20th century—it’s just a different level of sophistication.”

The roots of the coming regulatory battle trace back to the frantic days of the financial crisis. Goldman Sachs and Morgan Stanley began buying and running their commercial businesses when they still operated as independent investment banks, which freed them from many of the restrictions placed on traditional commercial banks. But in 2008, as financial havoc toppled their rivals, the two abandoned their investment bank status to become bank holding companies, effectively making them no different than companies like Bank of America or Wells Fargo. The switch qualified the two for emergency funds from the Fed, shielding them from the panic that had wiped out Lehman Brothers and Bear Stearns. In return, the banks accepted closer supervision by the Fed and new limits on their investment activities, which should have forced them to divest their commercial operations.

At the time, the Fed granted the investment banks a two-year grace period to comply with the additional rules. But after winning three one-year extensions (the legal limit), the two banks are now petitioning the Fed to make the privilege permanent.

Because the law does not require the banks to publicly detail all their assets, it is unclear just how extensive their physical and commercial empires truly are. But there are signs they could be vast. In its 2012 shareholder report, Goldman Sachs notes it partly owns and operates airports, toll roads, and shipping ports.

Jim Collura, who represents independent heat oil and energy dealers at the New England Fuel Institute, says his members confront moments when Morgan Stanley—which has held extensive control over storage facilities in New York Harbor—is involved in all lines of their business. “The company that provides you with your 401(k) and your banking needs [and] sells you strategies on hedging and daily price predictions is the same company, you discover, that sells and delivers you the oil when you go to the terminal,” Collura said in an interview. “It makes you question what is really going on.”

Critics say the banks’ active participation in commercial businesses gives them an unfair edge. “Why should depository institutions—with an explicit lower cost of funding guaranteed by taxpayers—be competing on a for-profit basis against non-subsidized competitors in a free market?” said Michael Masters, founder of the financial reform advocacy group Better Markets and a hedge fund manager based in Atlanta.

Tearing down the last firewall between the financial industry and the real economy could also affect lending by pitting banks against their customers. If a rival warehouse company were in search of credit, for instance, would Goldman Sachs freely provide it?  This kind of conflict is “increasingly a valid concern,” said Simon Johnson, former chief economist at the International Monetary Fund. “Finance has become much more concentrated, especially since the crisis, so where you might once have had more competition for financing, now you see potential for manipulation or cartel-like activity.”

Moreover, trading both a physical good and the financial instruments related to it gives banks an unfair advantage over other investors, as well as the power to hike prices of basic goods. In most commodity markets companies are legally free to use information from their physical operations to benefit their derivatives positions. While trading one in order to willfully influence the price of the other is illegal, regulators say detecting and prosecuting this kind of manipulation is extremely tough.

Recent investigations suggest manipulation could already be widespread. The Federal Energy Regulatory Commission (FERC) recently found traders at two banks manipulated electricity markets by taking losses on physical trades to benefit their financial swaps. It has been investigating whether J.P. Morgan manipulated electricity prices in California and Michigan, and is reportedly preparing to levy a record-breaking fine.

On Tuesday, meanwhile, the Senate Banking Committee will hold a hearing on banks’ presence in physical markets, following complaints from companies like Coca-Cola and MillerCoors that banks hoard aluminum to manipulate prices.

Banks have been forbidden from engaging in commerce since 1956, when Congress passed the Bank Holding Company Act. The purpose of the firewall was to ensure that banks lend money impartially, and to insulate the banking system and national credit supply from the risks and vagaries of commercial business.

Congress and the Clinton administration began to dismantle this wall in 1999,when it partially repealed the Glass-Steagall Act, the depression-era law that separated commercial and investment banking. Aside from allowing commercial banks to merge with investment firms and participate in their securities businesses, the repeal legislation also enabled banks to fully own non-banking firms like supermarket chains or semiconductor manufacturers for up to 10 years, an arrangement known as “merchant banking.”

Some restrictions remained. One was that a bank’s investment be “passive,” which meant the bank was not allowed to take a direct role in routinely managing the business. Another was that any direct involvement in commercial operations be somehow “complementary” to a bank’s financial activity. Congress required the Fed to grant special permission for each case, and charged the regulator with guarding against “undue concentration of resources, decreased or unfair competition, [or] conflicts of interest.”

Banks began to test this boundary in 2003, when Citigroup won permission (pdf) from the Fed to buy and sell physical oil, natural gas, and agricultural goods. Since then, the Fed has granted eleven more allowances for banks to engage directly in commodity activities that complement their financial businesses. J.P. Morgan, for example, stores copper and sells electricity while it also trades financial instruments in those markets.

The Fed, however, has generally prohibited banks from owning the infrastructure of these businesses outright. So while J.P. Morgan can store and transport oil, it cannot both outright own and operate oil refineries. Generally, any hard assets it does hold must be kept as passive investments.

With its imminent ruling, the Fed could erase even this line entirely. It declined to give a specific deadline for its decision, or to say whether it will make the ruling public. On Friday it said it was reviewing banks’ activity in physical commodity markets, its first public statement on the matter.

The central bank’s decision will partly rest on a broad, vague, and untested provision of the Gramm-Leach-Bliley Act, the law which undid much of Glass-Steagall. The provision authorizes any firm that becomes a bank holding company to continue or to expand virtually any kind of “activities related to the trading, sale, or investment in commodities and underlying physical properties,” as long as it engaged in some form of commodity business prior to 1997.

Goldman Sachs and Morgan Stanley argue this “grandfathering” clause covers their commodity activities and assets, a point they have made since 2008. Since becoming a publicly insured institution, Goldman Sachs has even expanded its physical holdings. In 2010 it purchased Metro International, one of the biggest warehousing companies in the London Metals Exchange system.

If the Fed agrees that the banks can “grandfather” their commodities businesses, experts say the regulator would be obliged to allow other banks similar privileges. “It would open the floodgates,” said James Kwak, a professor at the University of Connecticut School of Law.

Some experts believe the Fed will require the banks to limit their commercial activities to passive investments. In recent months, the banks have downscaled their commodities operations and according to reports are looking to sell certain physical assets, which some interpret as a sign they face pressure from the Fed.

But others note this could merely be a temporary adjustment that reflects a significant drop in recent commodities profits. It could also be a strategic maneuver. Divesting some assets could help the banks secure grandfathering protection for others, as well as the right to freely run commodity activities in the future.

“The banks are trying hard to downplay the significance of their physical businesses,” said Omarova, who formerly advised banks at Davis, Polk & Wardwell. “The key is whether that exit door is shut” firmly enough to block them from re-entering commodities during the next boom, she said.

Three people who have met with Fed officials on this issue believe regulators may rule in favor of the banks. According to one person, Fed lawyers believe the vagueness of the grandfathering provision permits the banks to retain their commodity businesses largely unfettered. All three asked not to be identified as the meetings were private.

Critics note that the Fed has little experience directly shaping commodity markets. Regulators who police these markets at the Commodities Futures Trading Commission and FERC say the Fed has not consulted them on this issue.

The only provision of Dodd-Frank, the financial reform bill Congress passed in 2010, that would stop banks from running commodity businesses is the Volcker Rule, which forbids banks from betting with their own money. Regulators are still finalizing the rule, but the latest version would not affect these activities. A legislative aide who worked on the rule said lawmakers would have addressed the issue had they known the extent of banks’ physical operations.

Omarova says the Fed can act in the public’s interest, if it chooses. The Fed “does not need to meet an especially high burden of proof to order the banks to get out of physical commodities,” she said. “The question is, will the Fed exercise that power? Who is setting the terms of the conversation at the Fed? The public has no idea.”

Lina Khan reports on the effects of concentrated economic power with the Markets, Enterprise, and Resiliency Initiative at the New America Foundation.