How artists can earn more than just appreciation 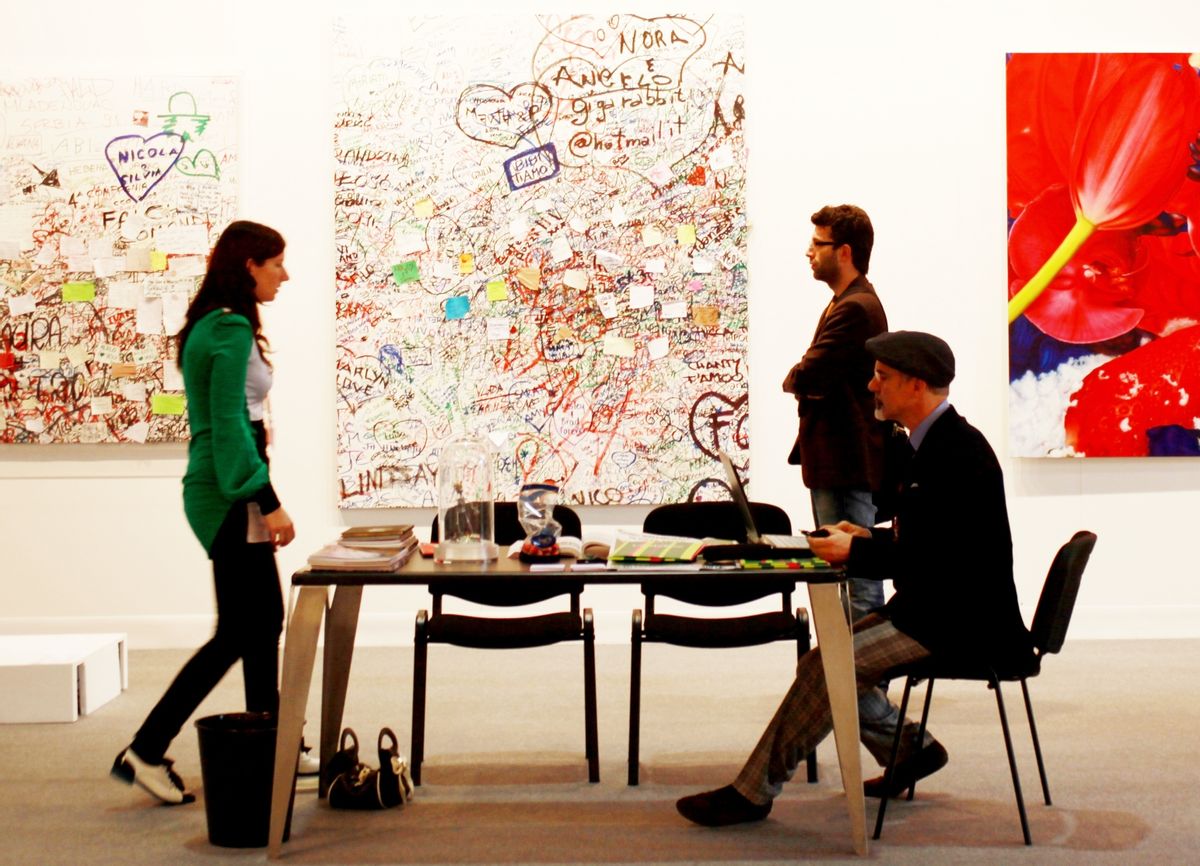 How are artists who have been systematically denied fair wages and access to basic services like healthcare and unemployment protections gaining access to those things today?

Art and labor is a big topic today, at least among artists. Specifically, it has become ever more obvious that virtually none of the money that flows into major arts institutions, companies that distribute creative content, and art markets actually reaches the artists who generate the work. And people are getting vocal about it. Just in the past couple weeks we learned about the millions that arts executives are pulling in and contract workers at the Smithsonian Institution went on strike. Before that we saw striking workers at the Frieze Art Fair, students fighting one of the country’s oldest art and design schools over tuition, and the Fine Art Museums of San Francisco grappling with labor disputes, lawsuits, and donor hijinx. And these are just the tip of a much larger iceberg.

So, how do artists go about changing things? The models for change fall roughly into five overlapping and intersecting categories.

Early in the 20th century, artists’ guilds morphed into labor unions as part of larger national cross-industry labor struggles, many of which still exist today. Their primary mode of ensuring that members get the money and services is through standardized contracts and working to create closed or mostly closed shops (i.e. only union members can work in certain places) or preventing union members from working in non-union establishments. Many musicians, actors, writers, people working in film, people working behind the scenes on stage, and some museum employees are in unions today. You can view a sample/standard Actors Equity Contracts for union members here.

Other groups that aren’t actually unions, like the Dramatists Guild and the Dancers Forum, have tried to put together union-like contracts, but without the ability to engage in collective bargaining, it’s up to each artist to advocate for themselves, and the legal intricacies can be daunting. So these model contracts often end up serving as guidelines and strong suggestions.

There is also the Freelancers Union, based in New York City, but they too lack the ability to enforce contracts or collectively bargain, and members have to pay individually for the services they offer, so they actually function a bit more like a professional association instead of a union at this point.

Professional associations can still be a useful way of advocating for large groups of workers. However, in the US, many of the largest arts-related associations, like the Americans for the Arts or the Theatre Communications Group end up focusing most of their resources and energies on institutions rather than individual artists, and it’s often these same institutions that artists seeking payment end up in conflict with. So, in the arts at least, there aren’t many that are working in a serious way to improve employment conditions for artists.

That said, at least in New York, organizations such as the League of Independent Theater New York (LITNY), are focusing on influencing local politics by lobbying politicians directly. Their list of political demands focuses mainly on organization-level needs, but they are explicit in seeking affordable housing for working artists, and their demand for affordable facilities would have a direct impact on rehearsal costs which are often born by individual artists working across theater, dance, and music.

3. Certifications / Change from Within

One group that has received a lot of interest in the US over the past couple years is Working Artists and the Greater Economy (W.A.G.E.). Founded and led by artists, W.A.G.E. has adopted a somewhat novel model. Rather than work from the outside in, they are proposing a certification program whereby willing visual arts and performance organizations would agree to abide by “ethical payment practices,” which amount to a custom artist fee and production support structure based on the budget and level of activity of each organization. This model has similarities to the work of the Canadian group CARFAC, which managed to get minimum payments to visual artists whose work is being exhibited written into copyright law in the 1980s. But currently W.A.G.E.’s version relies on organizations opting in or large groups of artists refusing to exhibit in spaces that don’t have certification.

A fourth method of seeking access to money and services, or, perhaps more importantly, decision-making power, is to put forth a set of revolutionary demands. One of the most well-known examples of this in the US in the 20th century was the Art Workers’ Coalition (AWC). Though it was short-lived, operating under that banner between 1969 and 1971, the AWC did put together a compelling list of demands that not only addressed payment to artists for use of their work, but also things like one-third representation of artists on all museum board, representation of artists of color on staff and in galleries, equal representation of female artists, and perhaps most revolutionary, the decentralization of museums.

Ultimately the people who helped to craft that list of demands believed that all people should have a minimum income, so their focus was less on traditional labor arguments and more on gaining control of their work and large cultural institutions. They were, particularly the Black and Puerto Rican artists among them, able to make important strides toward those goals, but because the group dispersed, there was little ongoing pressure to continue the fight for the group’s demands.

5. Going Off the Grid / Alternative Economies

With a similarly revolutionary viewpoint, Occupy Wall Street’s Arts & Labor working group has, over the past two years, been engaging in serious questions about how to rethink and rebuild the contemporary relationship between art and labor. Ultimately, according to the OWS Principles of Solidarity, they hope to “imagine a new socio-political and economic alternative that offers greater possibility of equality.” And so, Arts & Labor is committed to looking at alternatives to capitalism that don’t always associate dollars with labor. Their latest publication, What Do We Do Now: Arts & Labor’s Alternative Economies Resource Guide for Living in New York City, is filled with links to organizations or resources focused on everything from affordable housing and squatting to free and alternative health care to worker cooperatives and barter networks.

It’s All in the Mix

The reality is, of course, that these five categories are not really distinct or separate — they intertwine and overlap, and each relies on a viewpoint that believes the opaque and laissez-faire realities of the current arts landscape are not only detrimental to individual artists, but that they are part of a larger system that is detrimental to all people. In the coming months I’ll be doing more research on these ideas and others and in September will publish a follow-up piece with more specific examples of models that are working for US artists.

Alexis will be facilitating a class on this subject, titled Rights, Demands, and Radical Reimaginings: Art and Labor in the US at the Hyperallergic offices starting August 27. Registration info is here. Hyperallergic readers can get $15 off with the code HYPER.