Some questions for Tom Friedman on the sharing economy

The New York Times columnist is enraptured by the cool new thing. But he needs to dig deeper 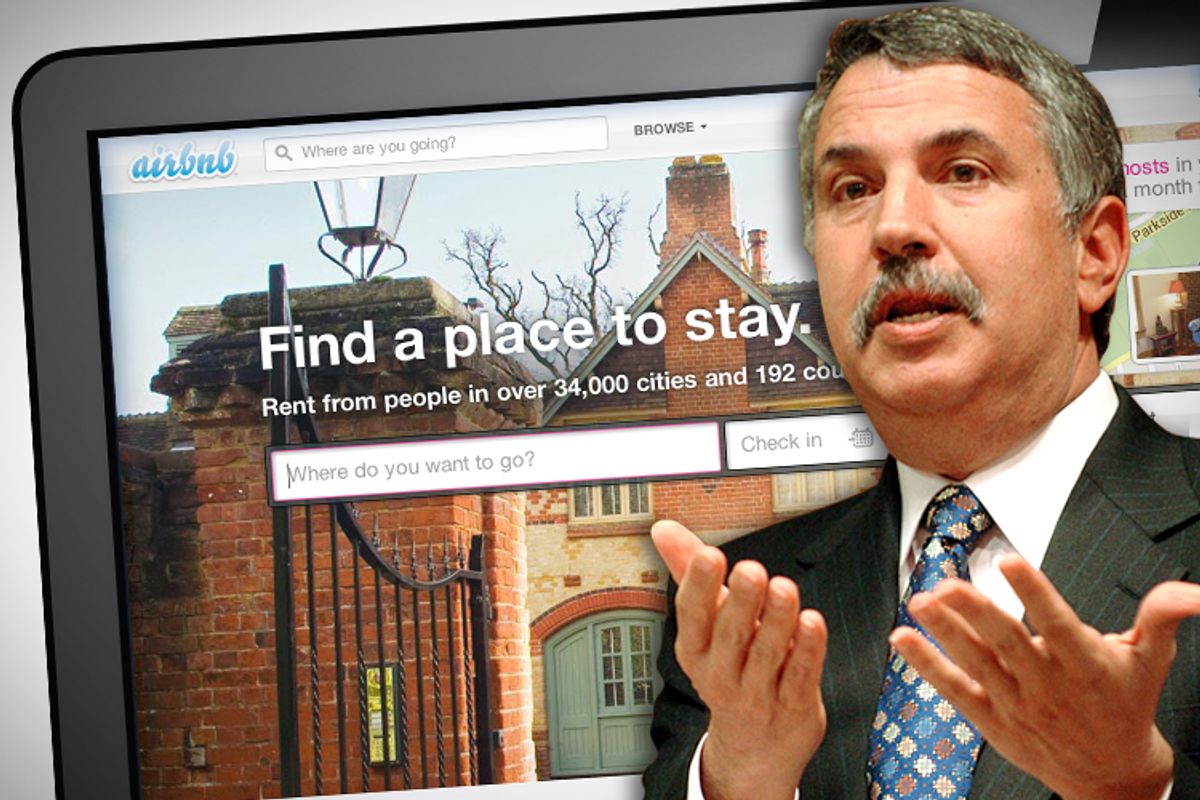 If you had never heard of the "sharing economy" before, Tom Friedman's enthusiastic embrace of Airbnb this past weekend might make for a nice introduction to the concept of "collaborative consumption." And that could be a useful thing: this new world in which where we exploit the Internet to rent each other goods we already own -- our living rooms, cars, power tools --  is a fascinating and important phenomenon.

If you are a regular reader of The New York Times, however, you might be excused for wondering where Friedman's been getting his news lately. A quick search for Airbnb in the archives of the Times reveals the paper has already mentioned Airbnb in 655 different articles.

In other words, we don't really need Tom Friedman explaining to us why Airbnb is cool.  It's time to level up.

In the interest of provoking discussion, here are some followup questions.

1) What is the impact of the sharing economy likely to be on the overall economy?

Friedman quotes Airbnb founder Brian Chesky saying "There are 80 million power drills in America that are used an average of 13 minutes... Does everyone really need their own drill?”

Well, if you are a company that makes drills, the answer is likely to be yes. You and I might save money by "sharing" our neighbor's tools for a pittance of cash, but if everybody jumps on that boat, the makers of power tools are going to take a hit. Likewise, the success of Airbnb, one would assume, will put pressure on the margins of traditional hotel companies. And all those startups enabling us to share used kid clothes and toys could mean the The Gap and Toys R Us take significant hits. And so on. Sure, we can also assume that the cash that we save from taking advantage of the sharing economy will be spent elsewhere -- restaurants, college educations, deep-tissue massage -- but how does it all add up? I am as enthusiastic as anyone about the potential for the sharing economy to reduce society's consumption of scarce resources, but our economy as currently constructed is based on  getting people to consume more. There are bound to be losers in the sharing economy. How bad will the carnage be?

2) How do we understand the interplay of regulation and the sharing economy?

You don't have to dig far into the New York Times archives to find lots of questions about how Airbnb fits into existing zoning laws and tax structures. In San Francisco, for example, it's not clear that Airbnb hosts are paying the city's hotel tax. SF's hotel tax, incidentally, is a major source of funding for local cultural institutions, based on the understandable presumption that one of the reasons why people visit San Francisco is to enjoy the thriving arts scene. So what happens if the rise of sharing economy hollows out the tax base?

For libertarian sharing economy advocates, every regulation is an impediment to the efficient functioning of a market economy. But health and safety and labor laws often exist for good reasons; they protect both consumers and workers. The business models for some sharing economy superstars appear to be basically little more than clever ways to game the system -- to sneak around the regulatory apparatus that currently exists. Are we so sure that this is always a good thing?

I understand and share Tom Friedman's excitement about the sharing economy. But we're way past the point where it is sufficient to go: hey, here's the cool new thing! Let's go deeper.