The host ripped the president's race speech for "lacking leadership." But it's Smiley who's out of touch here 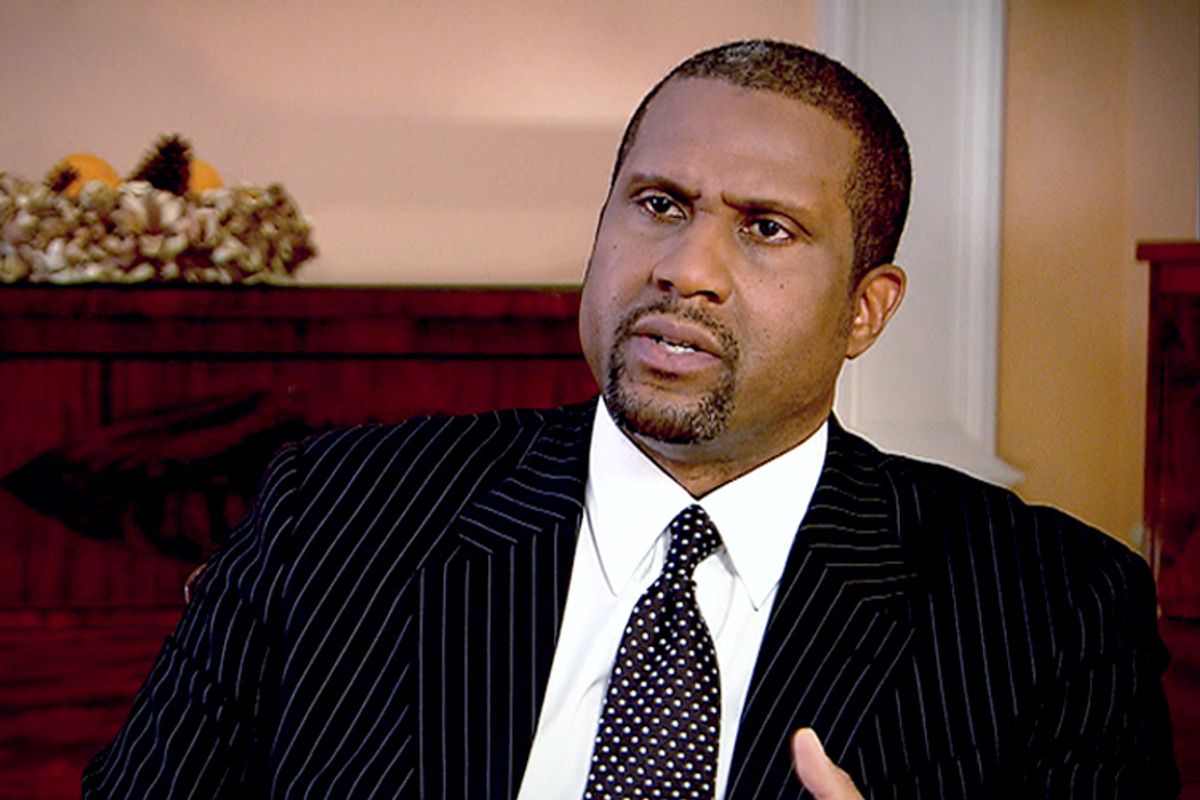 Like many on the left, I have vocally and publicly criticized President Obama for the often chastising and paternalistic tone that he takes with African American audiences. However, I was pleasantly surprised by his remarks last Friday in the wake of George Zimmerman’s acquittal in the murder of Trayvon Martin.

The most remarkable thing about this speech is that it is the first time that black men’s humanity and personhood have been the subject of a public conversation at the highest levels of government. By stepping into Trayvon Martin’s shoes, President Obama asked the nation to see him, in that moment, first, as a black man, as the kind of national subject who had been subject to racial profiling, to the sounds of locked car doors as he merely walked down the street, to women (many of them white women, I suspect) clutching their purses and holding their breaths while riding the elevator with him.

What the president implicitly acknowledged but did not say is what so many have been saying over these last few weeks: Trayvon Martin’s humanity and believability was on trial. The six jurors who found Zimmerman not guilty — of anything — demonstrated their profound inability to conceptualize black male victimhood. That Trayvon Martin was a young black teenager who was unfairly followed, confronted and killed seemed beyond the scope of their limited racial imagination.

The president, however, challenged the validity of the jury’s interpretation, while simultaneously characterizing the proceedings as professional and insisting that we peacefully respond to the verdict. This rhetorical tactic cleared the way for a more potent argument: If a future president could be followed in stores and unfairly viewed as a violent threat, surely it could have happened to an unknown black teenager minding his own business on a neighborhood sidewalk.

When President Obama talked about his experiences as Barack Obama, Black Man, he gave narrative force and authority to all those young black men who have been unjustly targeted and subjected to routine racist humiliations based upon the faulty assumptions of others.

The president constructed his sentences in such a way, however, that white folks were directly implicated, though rarely directly addressed. For instance, he repeatedly argued that the ensuing vigils and protests in honor of Trayvon have grown out of the ways in which African Americans interpret our experiences of racism. These interpretations provided the necessary context for understanding why we have been so enraged.

Even as he explained us to white people, he never accused white people of engaging in racist acts. Many Obama detractors on the left would consider that a cop out. The ascription of agency matters. And by relegating the sentiments of black people to the realm of interpretation, our claims become vulnerable to dismissal. Yet, the president is a rhetorical tactician and styling his remarks in this way allowed him to advance a powerful set of arguments about what it means to move through the world as a black man who is always already considered suspicious by simple virtue of color and gender.

Moreover, Obama never discounted the validity of our interpretations. In fact, he backed them up with facts, arguing that huge disparities in the ways both laws and penalties are applied in every arena of the criminal justice system from non-violent drug crimes to the death penalty do exist. It was a belated, muted, and definitely tardy acknowledgement of Troy Davis, but it was there.

And even in the moment of the speech wherein I cringed, when he argued that Trayvon Martin was more likely to have been shot by another young black man, he said something rhetorically important. Black men, he noted, are disproportionately both “victims and perpetrators” of violent crimes. If you’ll permit my literary training to take center stage here, his choice to place the term victims in this speech, putting it first in the pairing, matters rhetorically, especially when so much of the country is conditioned only to think about black men as perpetrators of crimes.

Subtly, the president kept bringing us back around to the indisputable fact of Trayvon Martin’s victimization, despite the jury’s verdict. He asked in earnest a question that has settled at the pit of so many of our stomachs, grounding our anger: “Could Trayvon have stood his own ground against Zimmerman, if he had been armed and of age on that sidewalk?”

In a total of eighteen minutes, the president did what the prosecutors could not manage to do over the course of two weeks of trial, with over a year to prepare. He demonstrated that Trayvon Martin was a vulnerable kid, unfairly followed, who was victimized because he could only bring his fists and his screams to a gun fight. And after Zimmerman murdered him, the system victimized him further, by suggesting as it does for so many black men, that there is plenty of ground upon which to die, but very little upon which to stand.

The failure to see this, the deliberate choice not to see this, makes it incredibly difficult, then, for me to rock with media pundits and strident Obama critics like Tavis Smiley. Essentially, Smiley argued on Meet the Press this week that because President Obama was “pushed to the podium” at the end of a week of protests rather than walking there of his own accord days earlier, he had again failed to provide “moral leadership.” “Kingian leadership.”

Therein lies the problem: Tavis Smiley and others of his generation crave a resurgence of prophetic leadership. And surely we need it. But they would do well to remember that kings, princes and presidents are rarely prophetic. President Obama is not a part of the black prophetic tradition. His response to Rev. Jeremiah Wright taught us that. He is part of an American democratic tradition that works most effectively when “we the people” lead from below.

I have certainly wished and even pushed for the president to be more vocal not necessarily in the conversation on race, but rather in advocating for policies that actually rectify the systemic injustices to which he pointed in his speech. Where are the policies that ameliorate poverty, crack down on the out-of-control, over-the-top methods of policing practiced throughout the country, address the ever expanding prison industrial complex and provide education and jobs that are accessible to black men?

Despite all that, I know that when the president stands up in his black male body and stands in as a character witness for a slain black boy, it matters. When the president argues that the nation has a duty to make black men feel valued and included as full citizens, it matters. And it matters, because no president has ever said it quite like that before. This is what American exceptionalism means for black people: that an extraordinary black citizen’s experiences must act as a guarantee of credit-worthiness, as a co-signer, if you will, for the experiences of the ordinary black citizen. This should not be.

Yes, the question is “where do we go from here?” But we should disabuse ourselves of the notion that the president should be the one to ask that question. The era of the singular charismatic black male leader is dead. And we should not attempt to resurrect it. There is no singular pathway to the future we want. We need far more dynamism and inclusivity than that proffered by a singular black agenda of the type that Tavis Smiley has attempted to lay out for us. Many groups, like the Dream Defenders in Florida, are poised to both ask that question and come up with solutions. And in this era of the digital, they can all do it #atthesamedamntime.

And we all need to get on board or get out of the way because though the president wants to believe “things are getting better,” they are absolutely getting worse. As black scholars like Khalil Muhammad, director of the Schomburg Center in New York, and Princeton professor Eddie Glaude have said in recent days, we are in a New Racial Nadir. And when we hit new lows, that means we need new leadership and new approaches. The first racial nadir happened after the end of Reconstruction, when all of the civil rights gains that blacks experienced after the Civil War were systematically and swiftly taken away as Democrats and Republicans constructed their own national reunification at the expense of black people.

Certainly, that seems to be happening again, as all of the legislative gains of the Civil Rights and Women’s Liberation era are being systematically taken away by an ever emboldened GOP and a largely timid Democratic Party. Even the newly reelected black president had to acknowledge that we, as a nation, are in fact, “not post-racial.”

George Zimmerman and his gun have demonstrated more aptly than any figure in recent times what the acute and severe convergence of systemic and individual racism look like together. And this means that we must organize, we must march, we must legislate, and we must resist. But it also means that the nation must begin to see black people, like Trayvon Martin, and Jordan Davis, and Marissa Alexander, as human beings who are worthy of protection and care.

Though the president could and should do more at the level of policy, by taking a stand on behalf of the fundamental humanity and value of black men to this society, he in fact did something important, namely reconvening our ongoing conversation on race, in far more humane terms.