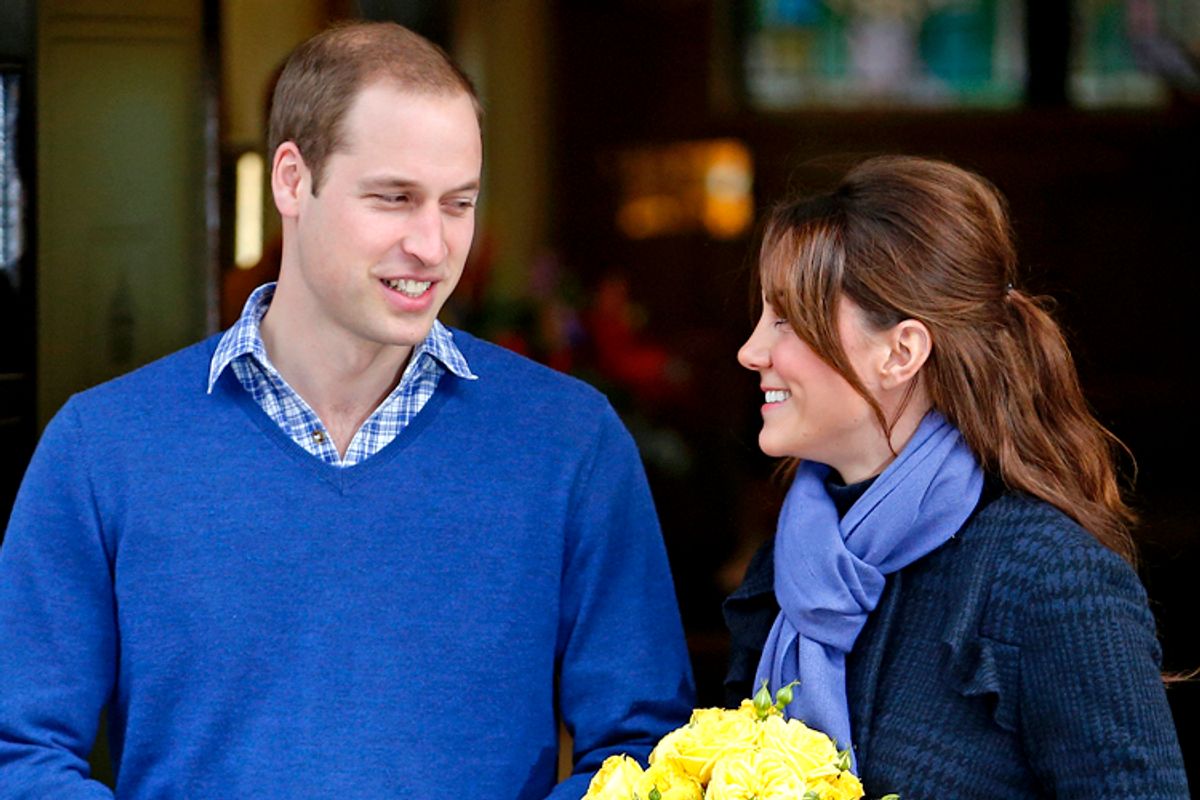 Don't panic, everybody, but we're going to need to boil some water and tear up some clean sheets and find a nice wooden spoon to bite on, and maybe run around a little like we're in an old episode of "I Love Lucy," because Catherine, the Duchess of Cambridge, has begun the process of birthing the eventual heir to the throne of England. It's going to be a rough time, but God willing, it won't be much longer now before we can stop obsessing on the pregnancy and start obsessing on how Kate's doing losing the baby weight. C'mon, everybody, push!

The first royal pregnancy in ages has been perhaps the most scrutinized non-Kardashian gestation in modern history. As incubator to the queen's great-grandchild, the former Kate Middleton has been a bottomless source of tabloid fodder since well before her pregnancy was announced – well before it even happened. On the day of the 2011 wedding to Prince William, as Catherine stood next to her brand new husband on the balcony of Buckingham Palace, I watched as a major cable news network commenter proceeded to speculate about how soon we could expect the bride to become a mother. And I sensed a touch of resentment that the network had not been invited to witness the marital consummation.

That same barely concealed irritation has been increasingly rearing its head again in recent days, as Catherine has, to the consternation of an army of professional royal watchers, steadfastly refused to go into labor and pop out a bouncing bundle of Something to Fill Airtime. And with each hour that Kate has gone past her alleged due date, the mad scramble to discuss an unchanged situation has become more brilliantly absurd. Is the baby late? Is there a problem? Does this interminable wait mean the baby is a boy? OH MY GOD WHAT IS HAPPENING? There have been empty trend stories about whether royals should breastfeed and paternity leave for princes. Over the weekend, a pair of royal look-alikes sent the paparazzi into a frenzy outside St. Mary’s Hospital in London, where reporters have been resentfully camped out in tents for the past several days. Royal baby fatigue has become so palpable, the press isn't even trying to hide its crankiness any more. On Sunday, the Hollywood Gossip noted that the baby watch, much like a hostage standoff, had now "dragged into" its second week. And as USA Today observed in the most thoroughly meta, cannibalistic story ever written, the desperate members of the press have of late been resorting to interviewing the other "bored journalists" staked out near the hospital. Frankly, I hope that baby gets born soon if only so I don't have to see another story about what the name is going to be.

Sure, the person who gets the first, best shot of the wee sprog cradled in its parents' blueblood arms will make a tidy mint off it. But what exactly is the point of an entire army of pundits waiting by the door? Are they expecting the world is going to need eyewitness accounts of some awesome "Lion King" kind of scenario? Because that's not going to happen.

Yet speaking of the circle, circle of liiiiiiiiife, the way the royal baby tale is currently unfolding in the media is not unlike the way the Nelson Mandela one is. Talking heads remain at the ready to weigh in on an apparently imminent event. But life moves in its own time – not to the rhythms of news cycles and commercial breaks, much to the consternation of producers and guest bookers.

I have a friend who works for a news network who says that the most exhausting thing about being in the media is that the news is always there, unstoppable. I argue with him that the opposite is true – that what's truly exhausting is that it isn't. Sometimes there just isn't a goddamn new thing to say, but the air space needs to be filled anyway.

Pundits need to spin, browsers frantically refreshed. That's why the past few days have become a splendid comic example of what happens when there's nothing at all to say. The silliness that's unfolded won't change the desperation of a novelty seeking news cycle, won't ever become a cautionary tale in what not to do. But it does provide an entertainment all its own – this dance of reporters whirling around with nothing to say, yet speaking anyway, in a kind of Lorem Ipsum for the information age. Soon, a child will be born into the monarchy and that will be truly newsworthy. But right now, an entire news corps is hanging upon every contraction, and that's been just hilarious.