The most amazing computer ever

The new MacBook Air is everything it is supposed to be: World peace and economic prosperity for everyone 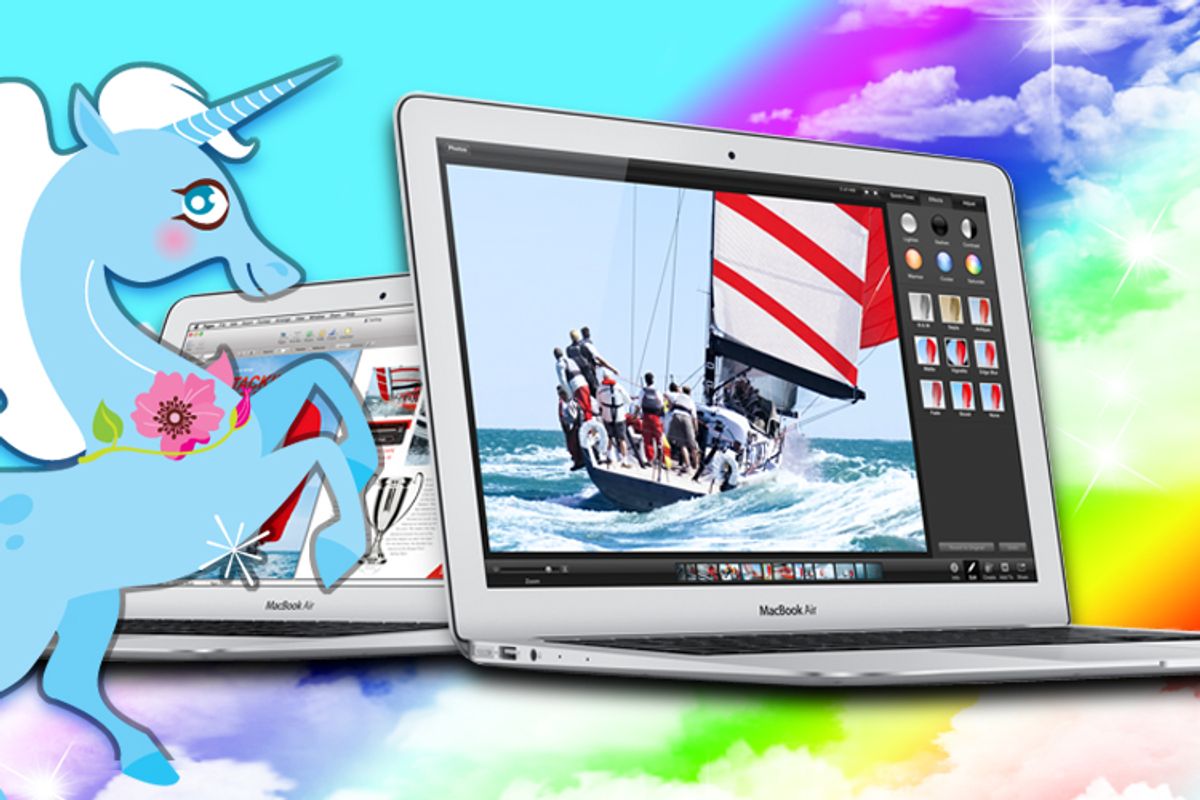 So, yeah, I've been super-cranky about the Internet lately, worrying about growing inequality and hyper-temp jobs and class hostility. But then I bought a new computer, and now I love technology again. I guess I'm just easy, but gosh darn it, when you fall into the embrace of a new computer, you learn how to live all over again. So I'm reversing course, again. Today, I believe in progress.

The new computer is a MacBook Air. If you have been paying attention to the reviews of the new line of Airs released in June you probably already know that they have been getting almost universal raves.

But if you haven't bought a new laptop for yourself in, gosh, almost seven years, well, then, this thing is ridiculous.

I was due. For the past four years I've been working on a MacBook Pro that was already well-used when Salon gave it to me as a replacement for an IBM ThinkPad stolen from my home. The MacBook Pro was a serviceable computer in its day, but, sad to say, for a year or so it has been a horse that needed to be put out to pasture. My screams of frustration had begun to alarm the local wildlife.

Indeed, as I revel in the glow of a computer that works, I'm beginning to wonder whether my recent grouchiness actually had nothing to do with Silicon Valley hypocrisy and greed, but really just stemmed from the fact that I couldn't keep three tabs open in a browser for more than ten minutes without crashing horribly.

Also: when hitting Shift-T results in the cursor jumping back three sentences, highlighting a big section of text, and ensuring that the next keystroke obliterates what you have just written, one's personal productivity starts to decline, and one's mental state becomes homicidal. And when the trackpad goes...

I won't bore readers with too many stats. Here's the deal: The Air's 12-hour battery life boast is for real. I've never had a laptop that could last half that long. I may book myself a flight to Auckland for the sole purpose of flaunting how I can work the whole way without searching for a power outlet once.

The responsiveness of the flash memory storage is a revelation. With my MacBook Pro, I would fall asleep before the computer woke up. The Air comes back from sleep instantly and boots up from a cold start faster than any computer I've ever owned. I haven't done any diagnostic tests on the 802.11ac wireless capability, but my impressionistic sense is that it is blindingly fast.

But the moment I became a true goner for my new laptop arrived before I had the chance to do anything substantive at all on my new Air. When I first booted the computer up, after connecting to my WiFi network the Air asked me if I would like to transfer any files over from my old computer. I had been dreading this moment -- and not just because the keyboard/trackpad issues were getting so bad that I was afraid I'd accidentally reformat my old hard drive while attempting to copy a few documents. In my 25 years of owning computers, transferring from one computer to another has always been an enormous pain in the ass. Old apps won't work on the new computer. Passwords and other settings need to be painstakingly reassembled. Countless things need to be re-downloaded and re-purchased and re-jiggered to get everything just how you like it.

I don't know how long it's been this easy to hop from computer to computer in the Mac world -- I was mostly a Windows guy before the MacBook Pro -- but I was flat-out astounded at how smoothly the Air accomplished the transition. It copied everything. Documents, applications, settings. It grabbed it all.

And then everything worked. It just worked. And my crankiness has melted away. I love you, Silicon Valley! With the MacBook Air as my guide, I can now dream of a better future; a future of rainbows and unicorns and puppy love; a future in which the whole world works as well as my laptop.

I mean, if a laptop can have twelve full hours of battery life and show me cute pictures of walruses asleep on Russian submarines, what miracles can't we accomplish?