Does a Star of David create a constitutional conflict? 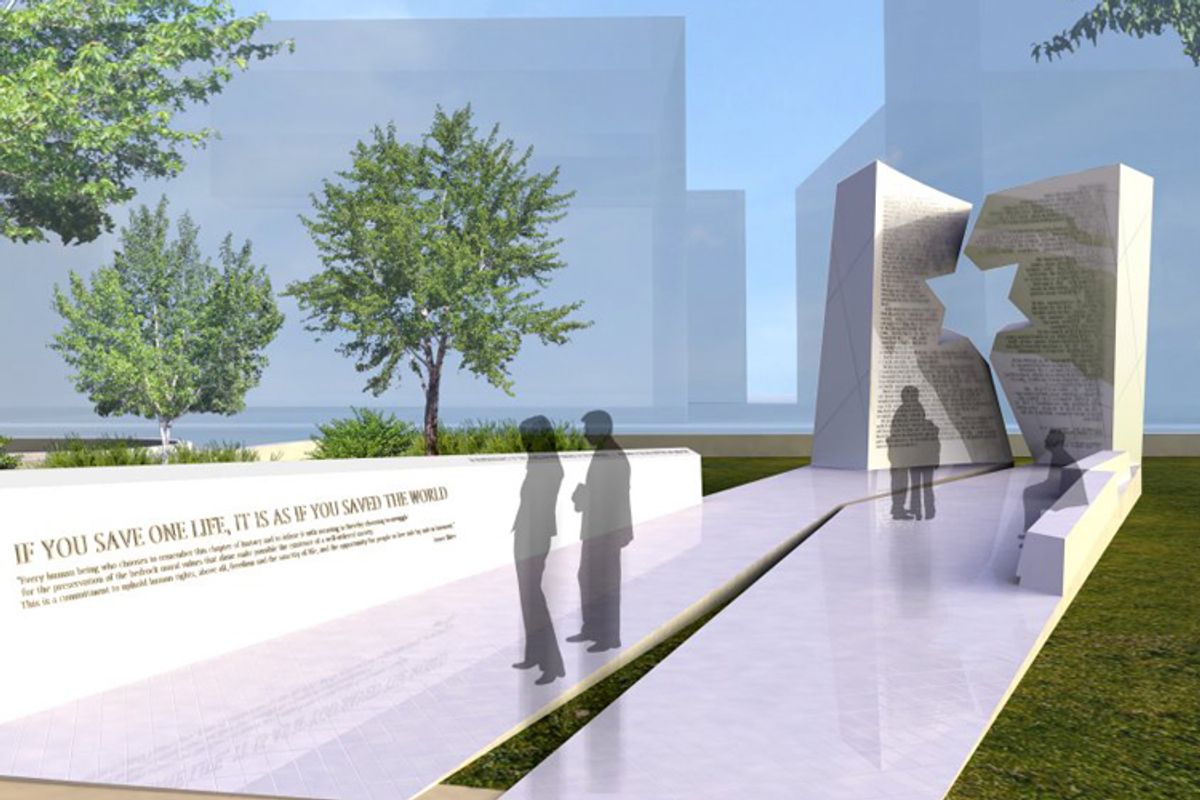 A proposed new Holocaust memorial in Ohio has found itself in the midst of surprising opposition – because its critics object to its inclusion of Jewish imagery.

The Columbus monument was designed by architect Daniel Libeskind, the Poland-born son of Jewish Holocaust survivors. Libeskind, in addition to having a deeply personal connection with the project, is also a big deal. He's designed museums and towers around the world. He's the guy they picked to redesign Ground Zero. His new memorial's design features two walkways that lead toward a pair of panels that form a cut-out Star of David. And, as the Freedom From Religion Foundation's co-president Dan Barker says, that's a problem. "Since the Star of David is a religious symbol and a secular government is not supposed to be promoting religion," he says, "especially when there are other perfectly secular alternatives, we're objecting to that religious symbol."

In June, the organization sent a letter to the memorial committee's chairman Richard H. Finan, stating that "while it is important to memorialize the Holocaust," the star's "prominent inclusion in the memorial gives the impression of an endorsement of Judaism" and represents "a design with constitutional concerns." The letter goes on to complain that the Star is "exclusionary, ignoring the sacrifices made by many other groups targeted by the Nazis." And here's the ballsiest part: it wraps up by saying that to honor one religion "would dishonor the truest protection our country has against a similar holocaust on our shores, the precious constitutional principle separating religion and government. Had there been a separation between religion and state honored and enforced in Germany, ensuring government could not favor the dominant religion and persecute and scapegoat minority religion and other 'dissidents,' there would not have been a Holocaust." Yup, one day you're placing a Star of David in a memorial, and the next, it's pogroms for everybody. It's a slippery slope, y'all. As it happens, the Republican Finan cast the sole vote against the memorial's design, saying, "I am particularly taken aback by this memorial. This is just too much. It’s the Star of David. You can’t get around that. I think we’re going to get sued." He added, "This is just too much to the Jewish religion."

We are a nation that is supposed to keep its faith and its politics separate, however poor a job we often make of it. But there's a world of difference between acknowledging religion and enforcing it. There's a difference between handing out bibles to school kids or erecting some illiterate version of the Ten Commandments at your state capitol and ignoring history. Most of us who strongly support the separation of church and state can also accept that if you're talking about the Holocaust, it really ought to not be a big problem to identify its impact on the Jewish community. To brush that off by saying there are "perfectly secular alternatives" is minimizing and insulting, a simpleminded request to make the Holocaust just a little less about killing Jewish people.

What's thoroughly exasperating about the opposition is the way it would prefer to dilute the horror of the past by glossing over the truth. It is well known that other groups besides Jews suffered at the hands of the Nazis, and it's reasonable to express questions about how respectfully a new monument would acknowledge them. The tragedies of the Holocaust are shared by many. The new memorial will also read, in part, "In remembrance of the six million Jews who perished in the Holocaust and millions more including prisoners of war, ethnic and religious minorities, homosexuals, the mentally ill, the disabled and political dissidents who suffered under Nazi Germany."

The atrocities of the Nazis were many, but history bears out they were frequently atrocities of religious persecution. It shouldn't matter one bit whether you subscribe to a religion or not to comprehend that during World War II – and in places all across the planet right now, today – people have been abused and murdered for practicing their faith. It infringes on no one to acknowledge that. It is no "endorsement" of any religion to look at that, to talk about it, to let in the devastation of that. Co-existence doesn't mean that we ignore each other's sufferings and the pains inflicted because of individual beliefs, even if we don't share those beliefs. And freedom from religion shouldn't look so much like fear of religion.