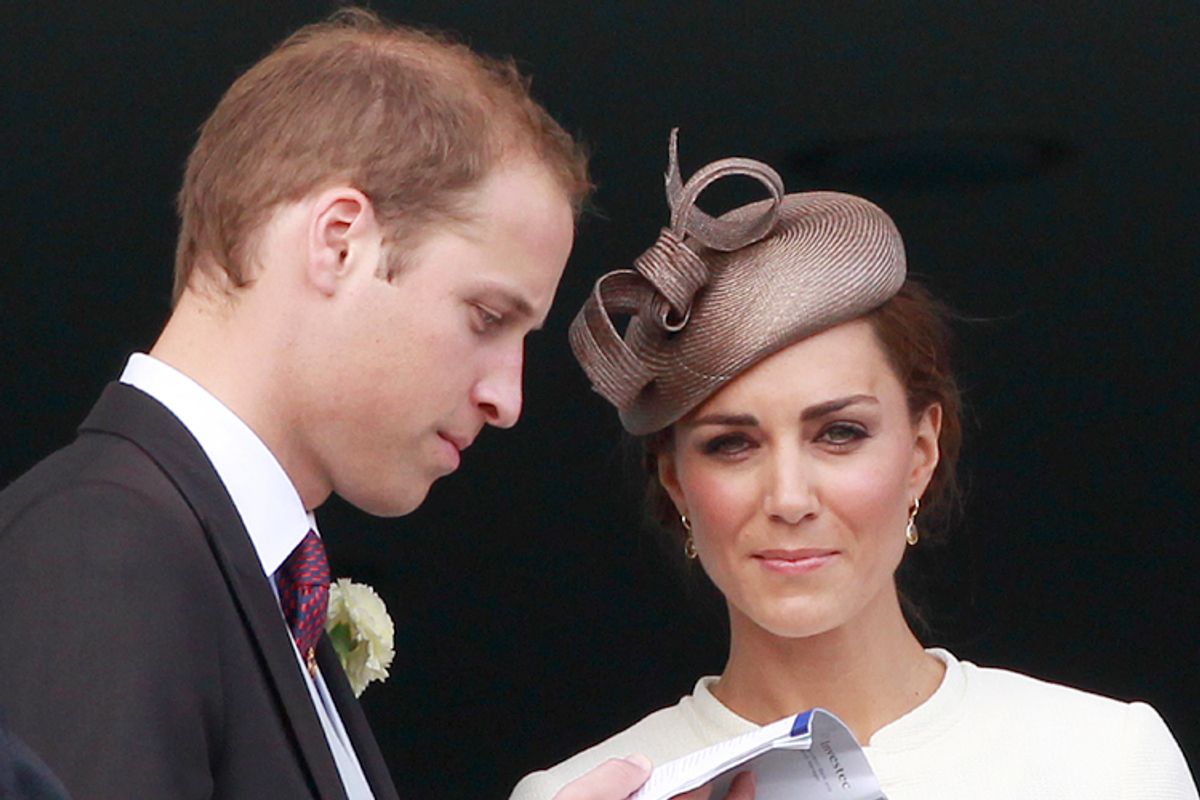 Although she's apparently "brilliant" for "being able to deliver a boy," we can't let Catherine, Duchess of Cambridge completely off the hook for her recent performance in popping out a royal heir. In a world that moves at the speed of 140 characters, the former Kate Middleton offered a labor that, in contrast, proceeded at the pace of an Andy Warhol movie. How very inconvenient.

From the somehow simultaneously bored yet berserk coverage of the past few days, you'd get the impression that no one in the media had ever actually witnessed or experienced the time-consuming, complicated process of bringing a tiny human into the world. Instead, beginning in the days before Kate's alleged due date and culminating during the interminable hours after the announcement she'd started labor but before the news of the birth of her son, you'd have thought that the sum of planetary knowledge regarding childbirth came from TV shows and Robin Williams movies.

On Fox News Monday morning, Martha MacCallum irritably noted that she'd been waiting "about a week" outside London's St. Mary's hospital but added the hope that Kate "could be moving along quite quickly." She also nonsensically added that Princess Diana had labored for sixteen hours, speculating on "whether or not that will have any impact on what we see here." (Hint: Why on earth would it?) CBS likewise impatiently reported that the "Great Kate Wait" was at last drawing to a close. ABC brought in an obstetric expert to answer George Stephanopoulos's exasperated question, "How long is this gonna take?" and ballpark, I kid you not, how efficiently the young prince might navigate the duchess' pelvis. And Huffington Post devoted a feature to "what you have to budget for," timewise, for the thing to finally be over. Gosh, you guys, this all must have been so hard for you.

For future reference, members of the media, a woman's body is not a microwave oven. You don't just set it for 40 weeks and expect her to push out a human when the timer goes ding. With my firstborn, I woke up in the pre-dawn hours on a Monday with contractions. The baby was born at 6:30 in the evening. On Tuesday. And with my second, I dutifully trotted off to my ob/gyn when I began having contractions. The doctor measured my dilation and effacement and told me it'd likely be a few more hours. My daughter was born ten days later, two weeks past her due date. Earlier this month, Erin Matson wrote a terrific piece on her labor that likewise spanned days, describing the contractions that "play by the rules of when you are supposed to go to the hospital" and then abate. And in "How to Be a Woman," Caitlin Moran served up a harrowing, stunning account of the epic adventure of the birth of her first child, a tale with a happy ending but a terrific, ghastly amount of effort in the arrival.

As Alison Turkos noted Monday, "I'm wondering with the 'royal baby on the way' headline lasting for so long if people will begin to realize just how long labor can be." Birth is not always some tidy, quick, soundbite-ready event. It doesn't happen in the last five minutes of a 22-minute sitcom. It's often lengthy and downright boring for most of the parties involved, especially those who aren't groaning in agony. That's why it's called "labor" and not "BOOM! There's your kid." And when they're being born, babies don't know yet that in this life we're eternally supposed to be hurrying up -- especially if there's an otherwise slow news day.