Huma Abedin stands by her man, but why should we?

Abedin has made the choice to stay with Weiner. But staying in a marriage is different than voting for a mayor 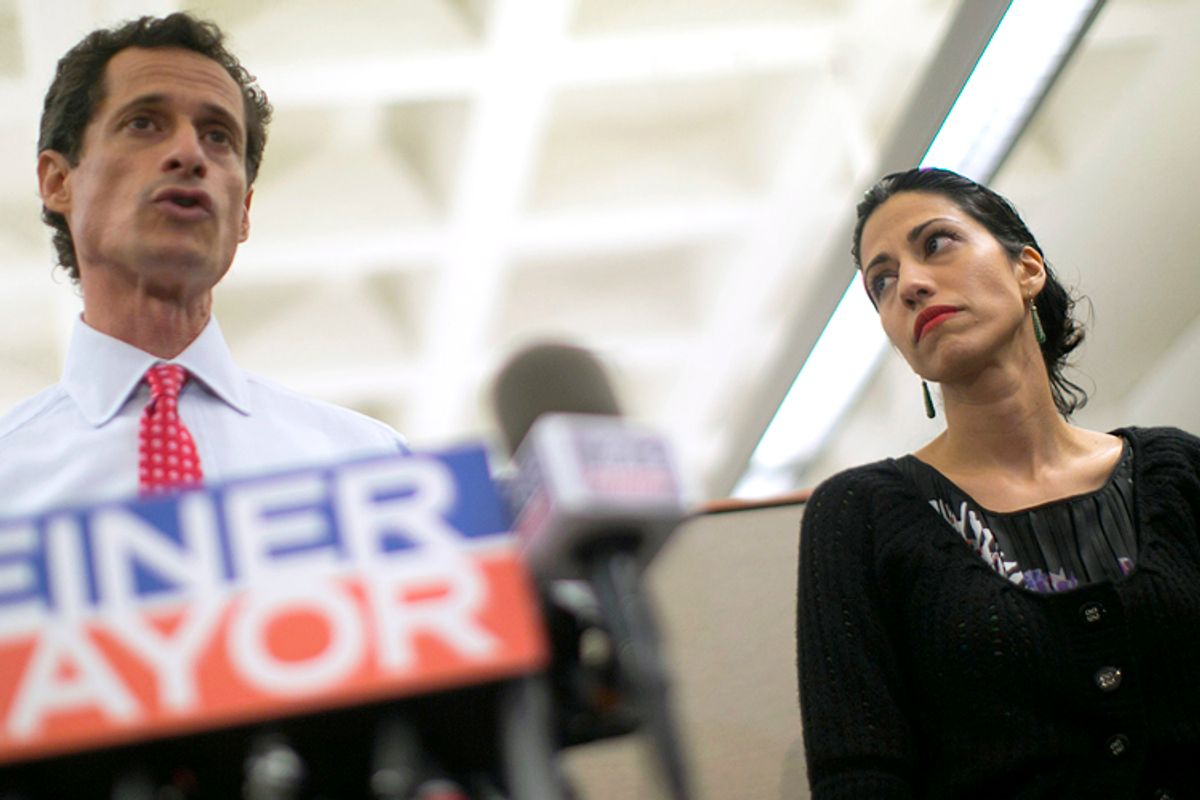 It was "not an easy choice" to stay with her husband, says Hillary Clinton staffer Huma Abedin. Yeah, I'll bet. On Tuesday, Anthony Weiner's wife plastered a stiff smile on her face as her mate admitted to what the New York Times discreetly refers to as "further online adventures" in the world of online sex as recently as last summer.

Reading from a prepared text, Abedin told reporters, "Anthony’s made some horrible mistakes, both before he resigned from Congress and after, but I do very strongly believe that that is between us, and our marriage... We discussed all of this before Anthony decided he would run for mayor, so really what I want to say is, I love him, I have forgiven him, I believe in him," adding, "It took a lot of work, and a whole lot of therapy, to get to a place where I could forgive Anthony."

Abedin now finds herself – yet again – in the uncomfortable place that a legion of political wives has faced, including, famously, her boss. She knows what it is to have her private betrayal turned into a New York Post punchline. And this whole "Carlos Danger" thing is not likely as hilarious to her as it is to every meme generator on the Internet. Abedin has made it clear from her statements she is not about to go all Jenny Sanford or Elizabeth Edwards  and walk away. She doesn't even seem likely from here on in take the Silda Spitzer tack and simply quietly recede from her cheating husband's limelight as he wages his political campaign. In an interview earlier this month, Eliot Spitzer said of their marriage that "We have both been hurt by what I did. Damaged by what I did. That exacts a price, an emotional price, in any relationship, and that is painful," but his wife has refused comment.

If we chose all our public figures solely by their private morals, we'd have a lot more Rick Santorums and far fewer John F. Kennedys. Anthony Weiner can show his penis to anyone who consents to gaze upon it and if he thinks he can competently run a city – my city – at the same time, mazel tov. But I do question the recklessness and sheer raging ego of a man who could step down in disgrace after his bald-faced lies about being the victim of "a hoax" a mere two years ago and believe he could effortlessly return to all of his old habits. It's pretty damn cheeky to pose for People magazine, smiling with your wife at your side and your baby in your lap, while you're asking another woman, "Would you let me hold your hair while you gagged on my cock?" Some might call that compulsive. And I'd say that at that point in the game, a man should have chosen one or the other – resuming his political career or showing his junk to ladies behind his wife's back. It's not just working moms who can't have it all, dude. And I'd be just as concerned if someone who'd been caught doing coke in his office had kept doing coke in his office. I don't expect politicians to be saints, but I like my elected officials to have a modicum of impulse control.

At Tuesday's press conference, Abedin looked pained but her words seemed sincere. In April, she told the New York Times that her forgiveness "was the right choice for me" and "I didn’t make it lightly." Love is complicated and long-term relationships can be messy. It takes grit to stay with someone who's been so hurtful, to trust again after such betrayal. But though fidelity is not on the job description for a public servant, it was the contrast between Weiner and Abedin Tuesday that seemed striking. When he asked the voters of New York to "Give me another chance" after "this behavior that I did," he sounded, yet again, like a bad boy who'd been caught with his hand in the cookie jar. Like a guy who's done a whole lot of lying over the past few years, who repeatedly engages in self-serving behavior, and who summons up abashment only when his hand is forced. Maybe that sounds like one woman's husband, but it doesn't sound like a great leader. If Abedin can accept him, flawed and weak as he is, good for her. But I'm a New York City Democrat, and I don't have to.