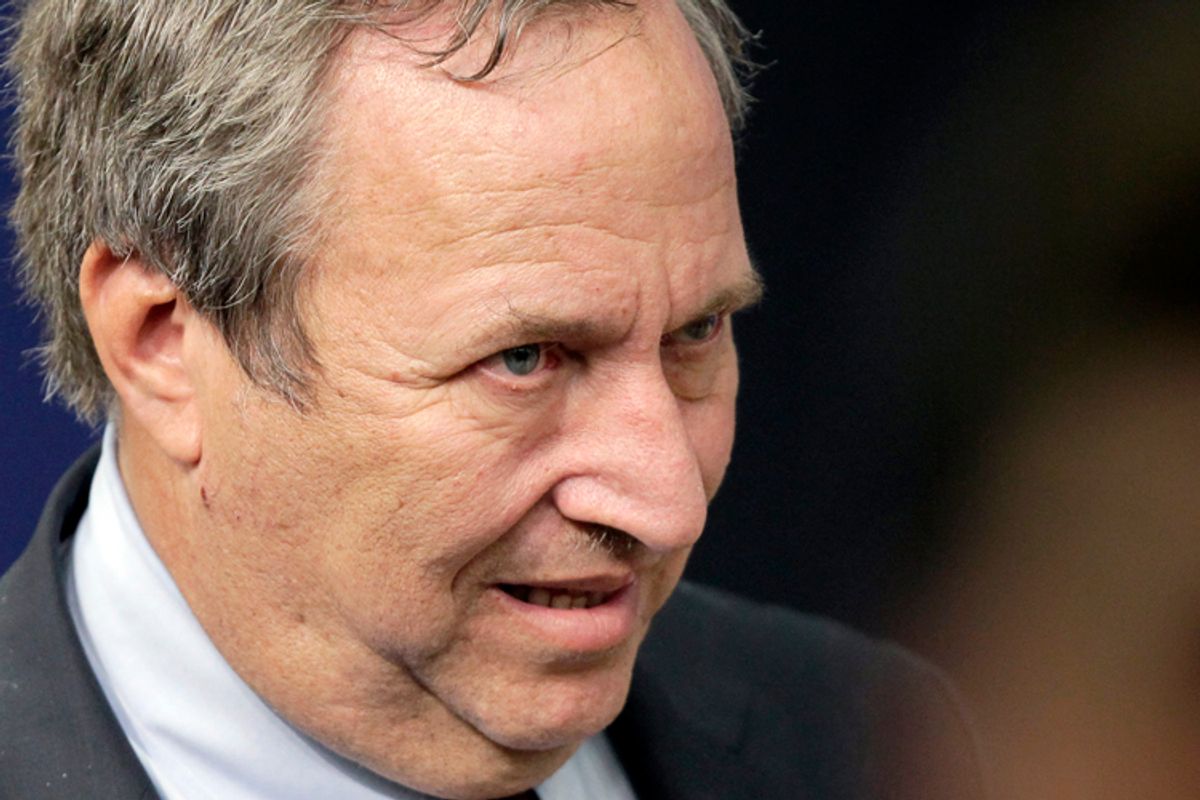 Multiple sources confirm to Salon that the White House is leaning toward choosing Larry Summers to replace Ben Bernanke as the Chairman of the Federal Reserve, a prospect which has made many liberals apoplectic. Previously, the biggest booster of Summers appeared to be Summers himself, as he was waging a one-man campaign for the position. But over the past week, he has won the backing of influential players at the White House with the ear of the president, many of whom are his personal friends and colleagues.

Summers would get the nod over the previous favorite, Fed vice chair Janet Yellen, in part because top-level officials have stressed to the president that Yellen is somehow “not strong enough” for the job, and would subsequently lack the confidence of financial markets. This gender-coded whisper campaign against the woman who would become the first female Fed chair in history is in line with an undercurrent of sexism about the selection -- and the fact that Summers has an unfortunate history on this, from infamous comments he made while president of Harvard University (alleging there exist "innate" scientific aptitude difficulties for women) just amplifies the potential problem for the White House with its liberal base.

But the gender issue, important as it is, may be more of a cover for what sources see as an ideological preference inside the White House for Summers over Yellen, one that could not only reverberate into catastrophe for the Administration politically, but may spell danger for millions of unemployed, under-employed and low-wage Americans, whose interests would again be held subservient to that of the financial system.

The Fed’s biggest preoccupations at the moment are 1) whether to continue monetary stimulus to prop up an economy that remains ailing, and 2) whether to implement financial regulations from the Dodd-Frank Act in a way that is adversarial or friendly to Wall Street.

On the first count, Summers’ public statements on the economy since leaving the Council of Economic Advisers in 2010 have largely been confined to fiscal policy, something that would be out of his reach as Fed chair (and which is also stuck due to Congressional gridlock). For what it’s worth, the Administration is confident that Summers would take seriously the full employment mandate of the central bank. But sources close to the situation worry that Summers would be more likely than Yellen, an inflation dove, to prematurely pull back on quantitative easing measures, and more important, become accepting of the current high levels of unemployment, without experimenting on bolder measures. Inflation would remain the primary Fed concern, a benefit to bankers, rather than full employment.

Summers’ true position on monetary policy is more conjectural (actually a problem when putting someone into a position of running monetary policy). But there’s no question that, on financial regulation, Larry Summers has perhaps the worst track record of any major economic figure in America. And the Federal Reserve plays a key role, perhaps the primary role, in regulating banks. Led by point person Daniel Tarullo, the Fed has recently doubled leverage requirements for the largest financial institutions. It’s hard not to see the Summers pick as designed to babysit Tarullo, and blunt any policies that come down hard on the banks. Tarullo and Summers are personally close, but Summers typically listens to his own set of sources on financial regulation – the ones in the very expensive suits – and this has had disastrous consequences for over 15 years.

In the 1990s, Summers and then-Treasury Secretary Robert Rubin led the effort to stop Brooksley Born from regulating derivatives, precisely the financial instruments that magnified the housing bubble and accelerated the financial collapse. Under his watch as treasury secretary, Congress eliminated Glass-Steagall’s firewall between commercial and investment banks, legalizing the merger of Citigroup (where Rubin would serve as director, senior counsel and Board Chairman). He further oversaw passage of the Commodity Futures Modernization Act, which banned all regulation of derivatives, even from state anti-gambling laws. Even Bill Clinton has apologized for deregulation of the riskiest sector in finance; Summers has not. Even well after the crisis, in 2011, Summers pronounced himself “more cautious than many about constraining financial innovation,” a not-so-thinly veiled code for encouraging a return to casino activity on Wall Street.

After contributing to the crisis, and then losing $1.8 billion for Harvard by investing most of their cash reserves in an endowment stuffed with risky trades, Summers denied the existence of the housing bubble. At the Federal Reserve annual conference in Jackson Hole, Wyoming in 2005, right before the crash, economist Raghuram Rajan warned of the imminent catastrophe in a formal paper, arguing that excessive risk-taking had surged, and that the banking system faced a “full-blown financial crisis” from the sliver of toxic securities on their own books. Larry Summers was the first to stand up and attack Rajan, bellowing that he found “the basic, slightly lead-eyed premise of [Mr. Rajan's] paper to be misguided.” Incidentally, Janet Yellen spoke publicly about the risks of the housing bubble around this same time.

In short, if we wanted to pin the crisis on one person, Summers would be a viable candidate. Nontheless, he failed upwards by taking a lead position on the Obama economic team, and the man responsible for much of the financial crisis would set out to fix it. He predictably failed again. Summers lowballed the estimate of how much stimulus would be necessary to get the economy back to full employment; he lied to key members of Congress about the Administration’s commitment to providing housing debt relief and support for cram-down, where bankruptcy judges would be empowered to rewrite the terms of mortgages (this never happened, as the White House withdrew support and created a mortgage relief program that has massively underperformed); and he stood mute about monetary policy efforts to turn around the economy, which would be his main area of impact at the Fed. So on fiscal, debt relief and monetary terms, when the economy was reeling and everything counted, Summers missed on all three.

To blunt charges of sexism in the Summers pick, the Administration may be shuffling around other key appointments. Earlier this week, a Bloomberg story announced that Sarah Bloom Raskin, a member of the Fed Board of Governors, was the leading choice for the number 2 position at the Treasury Department. One source close to the situation believes this was deliberately leaked by the White House, with nobody else’s knowledge. The intent was twofold: first, to provide cover for the Summers selection; and second, to silence Raskin’s protests of the Summers choice by dangling the top Treasury position as a reward.

It’s going to be nearly impossible for the White House to keep liberal opponents of Summers quiet, especially given the way in which he has been pitched as a “more aggressive” alternative to Yellen, with all the gender-based overtones that carries. “Women will not soon forget if President Obama picks Mr. Summers for such an important post, a man who believes women are somehow inherently less capable than men,” said Shaunna Thomas of  the women’s group UltraViolet, previewing the schism that such a choice would cause among the rank and file.

With the economy still fragile, and with fiscal policy completely stuck thanks to intransigent House Republicans, the Fed chair has taken on new significance as the only entity with a relatively free hand. They can at least try to make improvements in the short term on the economic side, and they can certainly use their power to ensure a stable financial system. That will further focus attention on Summers, a lightning rod for criticism, and in many ways deservedly so.