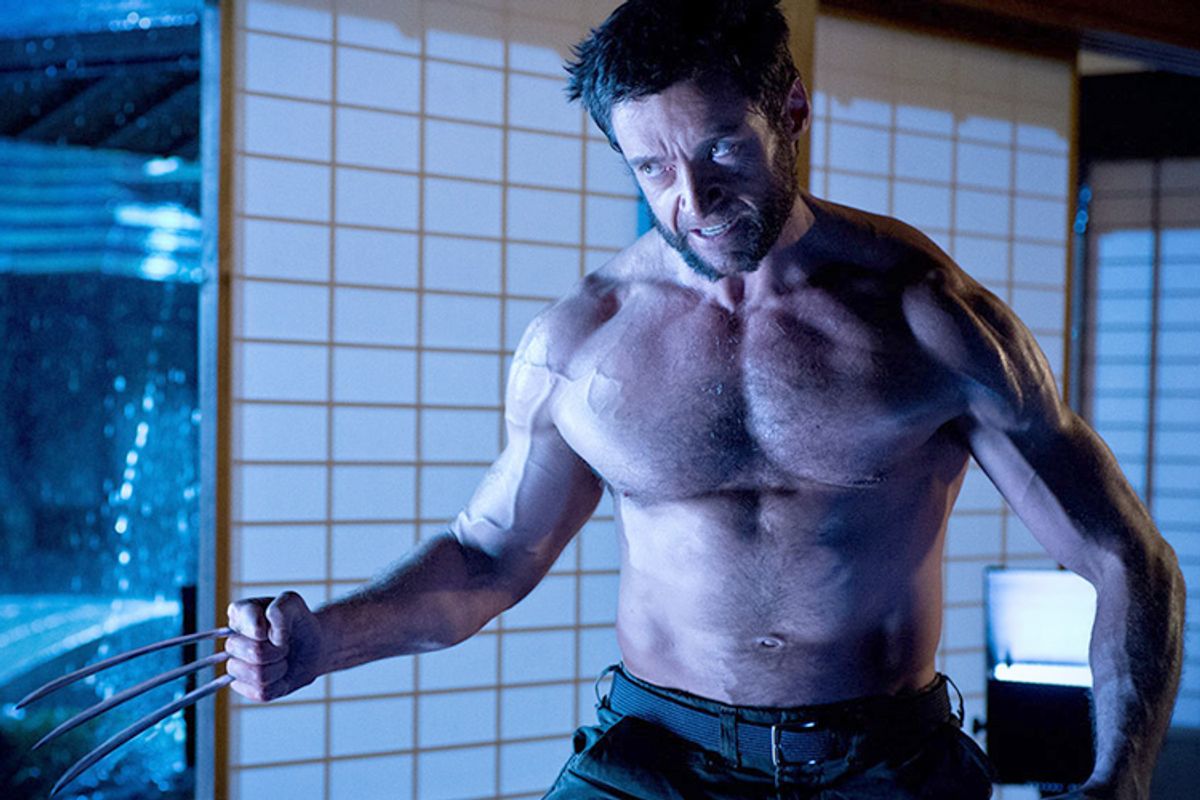 Hugh Jackman in "The Wolverine"
--

Here’s the good news about Hugh Jackman’s fifth round (unless it’s the sixth) as the clawed, hirsute manimal avenger of the Marvel Comics X-Men universe: Director James Mangold’s “The Wolverine” is a whole hell of a lot better than “X-Men Origins: Wolverine” from 2009. That movie, widely dissed by comics buffs for its canonical violations and general stupidity, gets completely ignored here and absolutely is not a prerequisite. In fact, “The Wolverine” comes close to being a low-key character reboot, and along the way delivers a solid, popcorn-flavored action-adventure that should delight genre fans, as well as admirers of Jackman’s alarmingly muscled physique. While this movie lacks the ambition or the scale of “Iron Man 3” or “Man of Steel,” and probably won’t challenge their box-office supremacy either, taken on its own terms “The Wolverine” is the cleanest, least pretentious and most satisfying superhero movie of the summer.

You can definitely see “The Wolverine” even if you’re utterly unfamiliar with previous X-Men movies or comics, although I imagine hardly anyone will. (Just turn on your phone and text me during the movie if you’re confused! Kidding.) Mangold (previously the director of “Knight and Day” and “Walk the Line”) and writers Mark Bomback and Scott Frank do a nice job of supplying a few back-story clues without ever backtracking into fan-familiar material or slowing down the story’s considerable momentum. We begin with a bang, literally – the really big bang that destroyed the city of Nagasaki in 1945, when the human-animal hybrid secret weapon known as Logan (Jackman) was being held nearby in a POW camp. (Although the movie’s depiction of the Nagasaki bombing strays pretty far from reality, there really was an American POW who survived the A-bomb in conditions not unlike Logan’s.)

Logan saves the life of a young Japanese officer who has shown him mercy, and who is reluctant to commit seppuku and die alongside his comrades. That act of kindness is the fuel for the present-tense story that brings Logan back to Japan, 60-odd years later, where his old friend Yashida (Haruhiko Yamanouchi), now a technology zillionaire, is close to death. (In case you’re wondering, Logan is 200-something years old and more or less immortal so, no, unlike Yashida he doesn’t look any older.) But before we even get to that, Mangold pulls off a nifty set of nested Christopher Nolan-style dream narratives: Wolverine dreams about World War II Japan and then wakes into a dream about Jean Grey (Famke Janssen), his dead mutant lover, and then wakes again to find himself living as a mountain man in the 21st century, somewhere in Alaska or the Yukon.

Honestly, that whole first chapter, with Jackman playing Logan as a brooding, haunted figure who prefers grizzly bears to human beings, possesses such potent atmosphere that I wish the movie could have stayed in the frozen north a lot longer. Inevitably, once ass-kicking redhead ninja chick Yukio (Rila Fukushima) shows up to drag Logan off to Tokyo to visit the dying Yashida, “The Wolverine” steadily moves in a more formulaic direction. That formula, in this case, is the Asian action film, and Mangold captures its tone and energy with considerable enthusiasm. Despite a limited track record with action cinema, Mangold and cinematographer Ross Emery craft several rip-roaring set pieces, including a full-on martial arts fight sequence in a Buddhist temple and a hand-to-hand battle between Wolverine and a yakuza gangster atop a 300 mph bullet train. (That one really might be the summer’s best action scene.) What combination of weight training, chemical stimulus and digital effects accounts for Hugh Jackman’s 44-year-old body I don’t know, but as usual he does a fair amount of his own stunts.

This movie’s version of Wolverine is a fairly standard noir hero, a growly loner who seeks justice despite his disavowal of all morality, and who is torn between the dead woman he loves and the extraordinarily beautiful living one who melts in his presence – that being Yashida’s granddaughter and heir, Mariko (Tao Okamoto). But Bomback and Frank’s script gives Jackman a lot to chew on, and he pushes the Clint Eastwood impersonation behind this character into some new terrain, especially after the statuesque but evil mutant Viper (ice-blonde Russian actress Svetlana Khodchenkova) finds a way to undo Wolverine’s healing powers and render him mortal. Again, those unversed in X-Men lore won’t have heard of Viper, aka Madame Hydra – but, really, what’s to know? She’s tall, she’s beautiful, she’s evil, and she can awesomely peel off her skin, in snakelike fashion. There you have it.

I’ll have to rely on true comics fans to untangle the appearances of Viper, the Yashida clan and the rather disappointing armored warrior known as the Silver Samurai in “The Wolverine,” and to figure out how they interact with previous tellings of this story. What moviegoers will notice is a severe energy drop-off in the supposedly climactic final act of “The Wolverine” – not nearly enough to ruin the movie’s overall enjoyment, but more than enough to return us to highly generic territory. This might be Jackman’s best outing as Wolverine, but the purpose of the picture is to be a short-term placeholder and fan-pleaser, keeping the door open for another sequel without guaranteeing one, and marking time until Bryan Singer’s full-scale X-Men reunion movie is ready next summer. Oh, speaking of which: Franchise fans might just as well stick around through the closing credits, just in case there’s something to see.