A brash, rowdy comic becomes a senator — and sheds his old, funny persona. Is "serious Al Franken" for real? 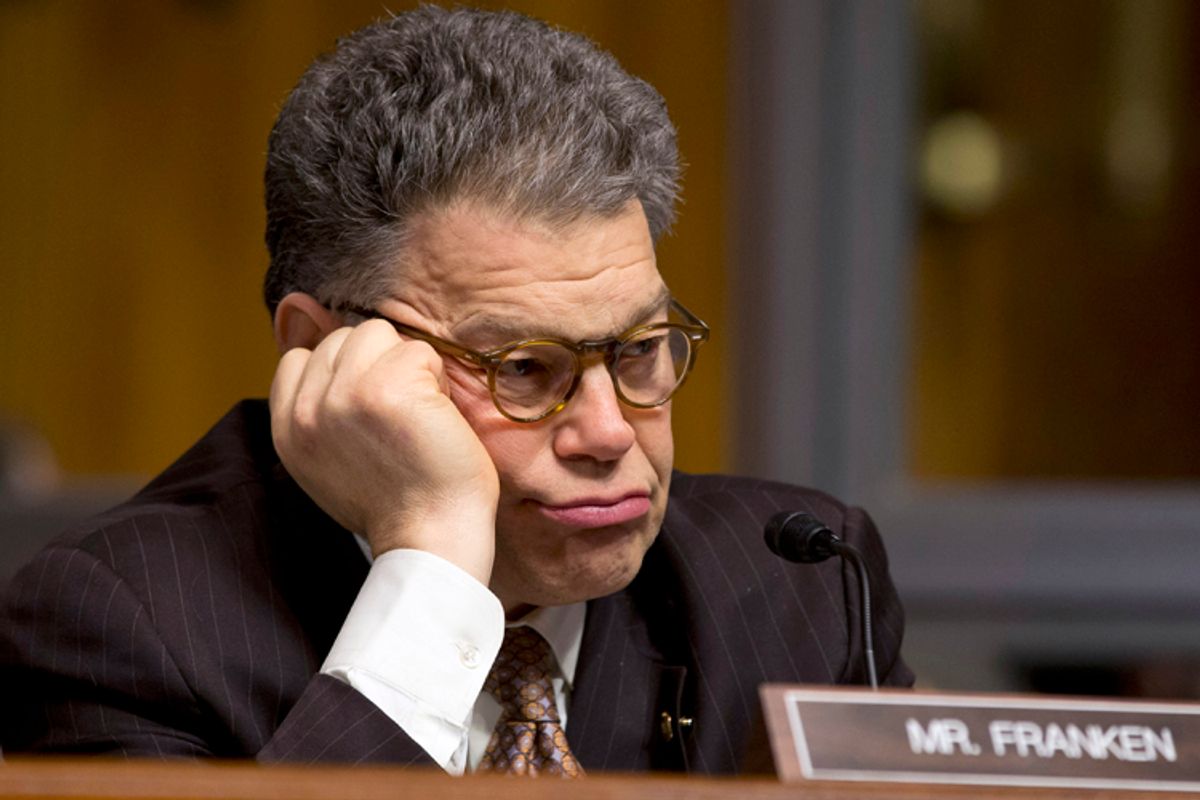 If you're liberal and follow politics and read Salon and watch the Daily Show, you probably noticed that Sen. Al Franken hasn't been the funny guy-liberal firebrand that many came to know and love. In fact, he's been downright dull in his Senate incarnation.

But if you've been hoping that he's just biding his time for his political position to stabilize, or for a second-term victory, before ripping off the mask and unveiling Al Franken, the Saturday Night Live goofball -- or Al Franken, the fiery Air America radio talker, or Al Franken, the Rush Limbaugh-basher -- don't hold your breath. "He’s crossed the Rubicon," University of Minnesota political scientist Larry Jacobs said. "I think he’s very genuinely kissed goodbye to that old self and I don’t think he’s ever going back."

And why would he? He has what many consider a dream job and appears to be exceeding all expectations, with impressive legislative accomplishments in Washington and unexpectedly high poll numbers back home. He's gone from being the arch satirist of the sometimes stultifying, sometimes ridiculous game of politics to being one of its most competent players, more disciplined than lifelong political hands and more serious than colleagues who have never pranced around as Mick Jagger on national television. "He’s playing the part of U.S. senator. It’s like you gave him a script, and so far he’s doing much better than I would have expected," Jacobs added.

"When Franken won the recount, I remember lamenting, only partly in jest, that I’d end up following our new celebrity senator on talk shows and in the New York Times," Kevin Diaz, the Minneapolis Star Tribune's excellent Washington correspondent recounted in an email. But Diaz hasn't had to worry about that, as Franken has kept his head down and nose to the legislative grindstone. "Their formula, I think, was pretty simple. Al Franken carried a lot of baggage with him when he came to Washington. Saturday Night Live, ‘Stuart Smalley.’ Public spats with Bill O’Reilly, Air America and the rest. The cameras were waiting for him at the Capitol. The newsies were literally tripping over themselves."

Indeed, Franken has had to overcompensate for his celebrity, and can sometimes come across as one of the more uptight members of a very uptight group of people. “I am worried about Al Franken,” President Obama joked in March. “How do you start off being one of the original writers for Saturday Night Live and end up being the second-funniest Senator in Minnesota?"

Franken wants to be taken seriously, but his celebrity and humor can get in the way, as he learned during his first big outing in the Senate -- the confirmation hearings for Supreme Court Justice Sonia Sotomayor -- when a joke overshadowed his policy agenda.

Franken was assigned to the Judiciary Committee, despite not being a lawyer, so he spent weeks working overtime to prepare for the hearing, trying to come up with original questions to ask the would-be justice. Back home in Minnesota, he assembled a bipartisan group of legal scholars and met with them for several hours, just to pick their brains on the law. "I’ve never seen another elected official do something like that. Just sit there and learn. Completely bipartisan. That’s what he’s been doing -- spending a lot of time studying, gathering information, doing his homework, keeping a low profile," said Hamline University law professor David Schultz, who was one of the scholars summoned.

When the hearings finally rolled around, Franken was the last to go, given his low seniority, but asked the first question ever put to a Supreme Court nominee about net neutrality, a pet issue of his. The question made a splash in the tech world, but the Washington political press was instead completely distracted by a funny, but irrelevant exchange he had with Sotomayor over the TV show "Perry Mason." "Sen. Franken's first joke," was the headline at Politico. Sean Hannity leapt at the chance to attack the former comedian for apparent frivolity and a GOP leadership aide circulated an email fanning the flames.

From then on, Franken and his team realized how they'd have to play the game. If he was funny, that's what the press would cover, at the exclusion of almost anything else. But on the other hand, that meant Franken could call attention to issues he cared about with "strategic deployment of humor," as a source close to the matter put it, who asked not to be identified.

"People set up this binary of either he’s a funny or a serious guy, but in fact he’s both, and he uses one in the service of the other," the person said. "He’s still funny, and he’s never stopped being funny, but that serious side of him has been way bigger than the funny side for a long time."

Indeed, many longtime Franken observers we spoke with said people misunderstand SNL Franken as the authentic version. If you go back and listen to his Air America broadcasts or read his books, they said, he was often wonky and even downright boring. "I wouldn’t say that it’s some sort of strategy or calculation -- being serious -- he is serious," Minnesota Democratic strategist Donald McFarland said. "I kind of hate to say it, but I think this is who Senator Franken is."

And as with humor, he and his staff dole out strategic deployments of his other most valuable asset -- celebrity. The senator is notorious among Capitol Hill reporters for refusing to give interviews in the hallways, and he often eschews the national press, focusing on Minnesota outlets instead. Many D.C. journalists who have spent time roaming the halls of Congress have their own stories of a run-in (this reporter was told off, rather brusquely, by the senator at a press conference last year), while others don't even bother trying to speak with him, given his reputation.

"Before I can even finish saying 'Washington Po,' in steps some guy: I’m sorry..." Washington Post media critic Erik Wemple wrote in 2011 about the senator's media policy. When CNN's Dana Bash tried her luck shortly after Franken was elected, she was repeatedly rebuffed and told to contact his spokesperson. "Every other senator we talk with, we ask a question, they answer the question," she protested.

"I've been able to ask Al Franken questions at press conferences but not in the halls of Congress. He basically only talks to Minnesota reporters, which is frustrating. Given his background as a comedian, I suppose his aim is to keep a relatively low profile nationally and demonstrate to his constituents that he wants the job for the right reasons," Talking Points Memo's tenacious congressional reporter Sahil Kapur lamented.

In Minnesota, however, he's highly visible and media friendly, appearing regularly on the local CBS affiliate's Sunday morning talk show, for instance. And his allies note that he will happily speak with national reporters who are interested in discussing issues he cares about, for instance doing Rachel Maddow's show on Tuesday night to discuss Obamacare. For other lawmakers, the national press is the only means of raising their profile, which can translate to increased political or policy clout, but Franken doesn't need to do that; he's already famous.

And there's little doubt that the strategy has worked well for the unlikely senator. After eking out a win by only 312 votes in the highly contested 2008 election, Franken now enjoys a 55 percent approval rating, with fewer than a third of Minnesotans giving him negative ratings. He's now the heavy favorite to retain his seat heading into his 2014 reelection campaign, more popular than Barack Obama in the state and with a 15-17 point lead over his potential GOP rivals.

Back in Washington, Franken's discipline has led to better-than-expected legislative gains for a freshman senator with no previous experience in elected office. His first piece of legislation, to stop federal funding for defense contractors who force sexual assault victims into private arbitration, passed the Senate just a few months after he was sworn in. A list of accomplishments provided by his office includes a bill that pairs military service dogs with wounded veterans; a provision of the Affordable Care Act that requires insurance companies to spend at least 80 percent of their premiums on actual health care spending; a bipartisan diabetes prevention measure; and legislation to crack down on credit rating agencies' conflict of interest with banks.

And to boot: "Franken is really well-liked in the Minnesota delegation," a staffer who used to work for a different member of Congress from the state said, explaining that Franken has worked hard to build collegiality in the delegation, hosting an annual cook off and originating lots of ideas for joint projects and press events.

So, with all that under his belt, and assuming he wins a second term by a larger margin than his first, could he finally loosen up a bit? "I think we will see little change in a second term," said Star Tribune editorial writer Lori Sturdevant. "He’s a guy who changed careers, and I think that’s the bottom line. He was a comedian, and now he’s not."

"I don’t think we’ll see anything interesting," said McFarland, the Democratic operative. "But who knows? He’s surprised us before."