The deadpan "Parks and Recreation" star plays a high school virgin, circa 1993, in a girl-centric sex comedy 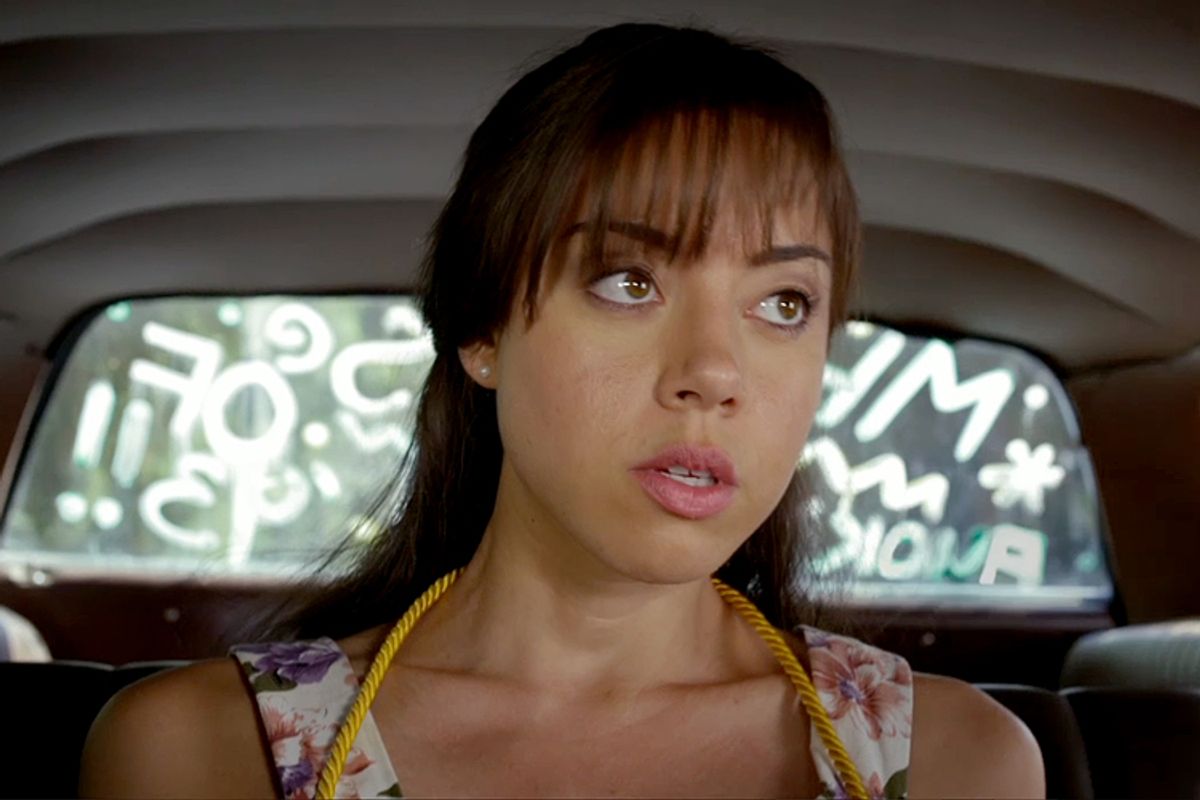 There have been other comedies about girls or young women determined to lose their virginity, so Maggie Carey, the promising writer and director of “The To Do List,” isn’t out to shock anyone with that premise. This movie’s central gag is that Brandy Klark, who is played by “Parks and Recreation” star Aubrey Plaza, applies the same driven and programmatic type-A personality that has made her valedictorian and kept her a virgin until graduation to her new task of gaining sexual experience. She has indeed made a list of things she’s supposed to try before heading off from Boise to Georgetown, without knowing what some of them are. “Teabagging, hmm,” she muses. “Sounds British.” She can’t find “rim job” in the dictionary and suspects she’ll have to ask the librarian. Oh, and to answer your next question, Brandy’s class of 1993, so no, she can’t witness bored people in Lithuania performing these acts within seconds of requesting them.

If “The To Do List” has a handful of juvenile gross-out gags involving things Brandy puts in her mouth, for the most part it’s a cheerful and sprightly comedy that delivers moderate laughs and should connect with the younger female audience that Hollywood largely ignores in the summer. If it's not quite the comedy breakthrough of say, Emma Stone in "Easy A," it might make a lot more money. This is definitely a formula movie, lovingly and even obsessively so, made by someone who obviously enjoyed “American Pie” and numerous other raunchy-sweet teen sex comedies of the '90s, and wished they existed for girls. How much you enjoy it will depend an awful lot on how you respond to the calculated, deadpan manner of Plaza, who isn’t everyone’s cup of astringent black tea (with no sugar).

Plaza’s performance grew on me quite a bit; on several occasions she adds extra dimensions of need and uncertainty to what could have been stock nerd-girl-gone-slutty scenes, including Brandy’s earnest first efforts at performing and receiving oral sex (the former involves an Eddie Vedder type whose hair dye is coming off in the shower, and the latter interrupted by a little kid seeking help with a VCR). Determined to catch the eye of blond, muscular lifeguard Rusty (Scott Porter) – who is supposed to fulfill the final line item on her agenda -- Brandy struts around the pool in her red one-piece swimsuit in what she thinks is a performance of sexuality, one that totally undercuts her natural appeal. As for the fact that Plaza is 29 years old and playing a girl more than a decade younger, first of all, she pulls it off, and second of all, that too is a tribute to a genre that often features actors old enough to be divorced as high school kids. (Porter, a veteran of “The Good Wife” and “Friday Night Lights,” is 34.)

Carey, previously the writer and director of several “Funny or Die” segments and the long-ago documentary “Ladyporn” (which I remember as highly entertaining), clearly wants to make the most of her first feature film and craft a commercial hit. There’s nothing wrong with that, God knows, and “The To Do List” is often very funny without descending to viciousness or shock value. (Indeed, the film’s R rating only reflects the near-constant sexual patter and innuendo. There’s no nudity whatever, and Plaza gets no closer to it than underwear and a Clinton-Gore T-shirt.) But in between Brandy’s dogged masturbation sessions and studied efforts to seduce Rusty, there’s a loopier, more indie-flavored film trying to escape from this one. That movie might be more about Brandy’s aimless summer days at the pool with her likable, stoner-ish boss (Bill Hader of “SNL”) or her relationship with her New Agey, sexually liberated mom (the reliably awesome Connie Britton, underutilized here) or her proto-“Sex and the City” friends Fiona (Alia Shawkat) and Wendy (Sarah Steele), who vow that before the summer’s over they’ll get together to watch “Beaches.”

That movie I just described would get better reviews than this one will, with its tightly structured – and sometimes forced – comic beats, imported wholesale from more guy-oriented pictures. I wish the supporting cast around Plaza, which includes Britton, Hader, Rachel Bilson as Brandy’s trashy older sister, Clark Gregg as her hapless dad and Johnny Simmons as the nice boy waiting for Brandy to notice him, had more interesting things to do and weren’t quite so sitcommy. And we probably would have been OK with just one scene in which Brandy contemplates the texture of semen. But Aubrey Plaza’s performance is a slightly guilty summer delight, along the lines of a bittersweet but delicious frozen chocolate bar, and Maggie Carey is about to jump to the head of the list of female comedy directors.