5 theories why Florida is so dysfunctional 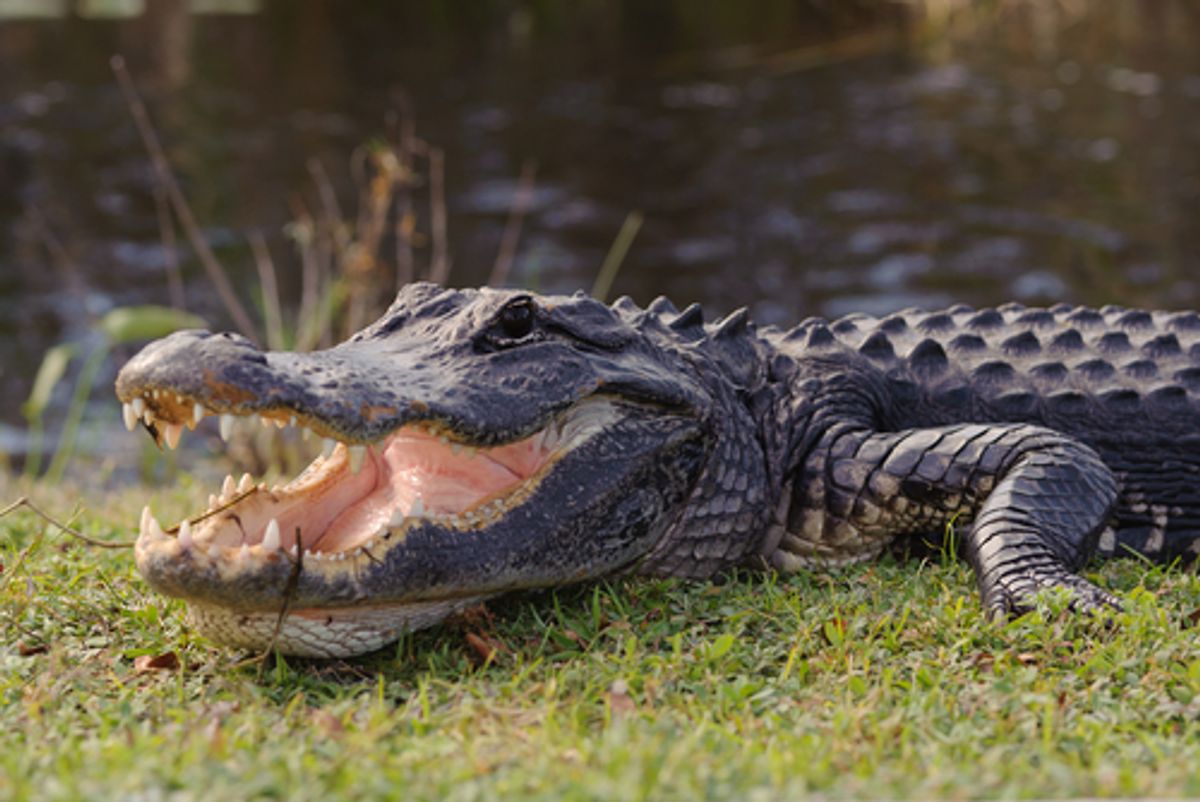 Every state has something shameful to hide. But Florida is the weirdest state. It’s one thing to go online and look at the latest "Crazy Florida" lists or "Weird Florida" tours. If you Google, “Why is Florida,” before you type in another letter, it fills in, “so crazy,” “so hot,” “so weird.” But joking aside, if you drive south from Alabama and Georgia and turn on the nightly television news, you are going to find behavior that ranges from dumb and dumber to dark and despicable.

“A Florida man shot himself in his penis and testicles while claiming to be cleaning his gun,” blared one ABC-TV affiliate. “A Florida man whose hand was bitten off by a nine-foot alligator now faces charges of feeding the animal,” blared another. And state wildlife officials also were not too thrilled with a company whose business is bringing alligators with their mouths taped shut to kids’ birthday pool parties (for a $175 fee).

But then the local news goes gothic. A Florida man was upset that his wife didn’t thaw the frozen pizza and shoved her face into a dog bowl, police said. Another man forced his wife to swallow her diamond engagement ring after she announced that she was leaving. In another bad pizza story, a man punched the delivery boy after he forget garlic knots.

And then comes cannibalism. Another man “chopped off his victim’s head, removed part of the brain and an eyeball, put them in a plastic bag, walked 12 blocks to this cemetery, Lakeview Cemetery, and then ate them,” WTHH-TV reported. Other skin-eating criminals also made national news, with details too gross to mention.

So what is it? Is there something in the state’s character that delights in proving—or telling the world again and again—that Floridian facts are stranger than fiction?

“A Florida man is dead after competing in a bug eating contest at a reptile store,” another station reported. Another cockroach-eating story starred a preacher wanting to attract new parishioners. The state sponsors python killing contests, though some Floridians keep them at home as pets—until they are herded like cattle and confiscated.

The “weird Florida” list goes on and on—and then it moves into the political world.

Florida’s bad politics startled the nation in 2000, when the U.S. Supreme Court stopped a presidential recount and gave the White House to George W. Bush. Its current governor, Rick Scott, is one of America’s worst. He was elected after touting his years as CEO of Columbia/HCA, a big hospital chain that paid a total of $1.7 billion in fines for taxpayer-bilking Medicaid fraud felonies that were mostly committed while he was in charge. He spent $75 million of his money on his 2010 race. The fox now runs the henhouse.

At times, Scott, a Tea Party Republican, seems like a buffoon. At other times, he’s bent on destroying Florida government. He’s mistakenly given out phone sex line numbers at press conferences and signed a bill that unknowingly banned computers and smart phones at Internet cafes. He was called one of the nation’s worst governors by the Chronicle of Higher Education for wanting to phase out funding for the humanities. Scott resurrected a slew of Jim Crow-era voting tactics before the 2012 election, including false claims that 180,000 aliens were on voter rolls and shutting down voter registration drives.

Beyond Scott, Florida’s justice system cannot shake its inescapable racist reputation. It’s not just that the Trayvon Martin prosecution team could not convict George Zimmerman. The same prosecutor sent a black women—a young mother—to jail for 20 years for firing a warning shot after her husband, a known domestic abuser, threatened her.

Florida is a state of extremes. It has the most bugs, the highest identity theft rate in the nation, the flattest roads and the worst elderly drivers. Two of its cities, Pensacola and Jacksonville, rank in the top 10 nationally for most toxic drinking water. More cities are among the nation’s top 10 with stickiest weather: Apalachicola and Gainesville. It has the fourth most volatile economy, with one quarter of its 19.3 million residents losing one-fourth of their income in 2008 economic crash.

California has the most poisonous snakes, but it does not have the Sunshine State’s snake obsessions. Nor does it have a detective’s daughter displaying an ounce of cocaine from the police locker for a grade-school science project (involving sniffer dogs).

As UrbanDictionary.com notes, white Floridians with pre-Civil War roots are proud to be called “crackers,” and are known for fishing and swimming in lakes and rivers; knowing what swamp cabbage is and how to cook it; eating cane syrup on biscuits and gravy on squirrel and rice; and knowing to take off one’s hat when hearing Dixie or any Lynyrd Skynyrd song.

“This just makes me want to laugh,” replied Casey Schmidt, to CBS’s Miami affiliate when they asked about Florida’s weird reputation. “You say people down here only care about themselves, well that may be true. Until we know who you are and what crazy ideas you are bringing from some other crazy state, we are just going to take care of ourselves. If you don’t like the way we’re living just leave this long-haired country boy alone.”

Using boomer Southern rock lyrics to express "screw you" sentiments—courtesy of the Charlie Daniels Band—is predictable enough. But other writers to the same blog had more insightful comments.

“I live here in Pinellas County and I believe it’s a combination of extreme poverty from low paying jobs, heat, and no access to mental-health care (unaffordable health insurance and very hard to qualify for Medicaid),” another said. “You get desperate, depressed, angry, and eventually just don’t care about anything.”

What do other Florida watchers say? There are a half-dozen good theories accounting for the beat-on-Florida bandwagon.

2. The curious mix of people drawn there.

Allison Ford, theorizing at DivineCaroline.com, said Florida is one of those states that is more populated by people who come from elsewhere than by natives. This includes old people, immigrants, the very religious, “carpetbaggers and the nouveau riche from the rest of the country,” rednecks and tourists, as she said. “Florida has about 19 million residents. Is it any surprise that you have more weird news than Wyoming?”

Ford does not even mention that Miami has long been the destination of choice for Latin America’s exiles, most notably from Cuba. Vanquished military dictators also favor the region, as well as impoverished Haitians. Ex-New Yorkers linger on the Atlantic coast. Midwesterners go to the Gulf coast. And that’s just the southland.

Somerset Maugham’s quote about the French Riviera has become Florida’s unofficial tag line—a "sunny place for shady people." Roger Stone, one of Richard Nixon’s henchmen, told the New Yorker that he moved to Miami in the 1990s “because I fit right in.” To say that Florida has a loose regulatory environment barely states it. People move there to buy homes that can’t be seized in bankruptcy proceedings. There are loose gun laws, of which the Stand Your Ground law is but one example. Ford noted the state has “no system to monitor the distribution of prescription drugs” and there’s no state income tax.

“While plenty of people come to Florida looking for simply a better life or better weather, the state attracts a contingent of people who come for more illicit or opportunistic reasons, and these people tend to make the news,” she said, citing its loose laws and frontier mentality.

4. The land and the weather.

It’s not just the lack of four distinct seasons, but the mix of heat, humidity, hurricanes and native flora and fauna that’s not found in the rest of America. As Swamplandia! author and Miami-Dade native Karen Russell told "On The Media," it all starts with the weather. “You’re just bathed in this unchanging summer like all the time,” she said. “The shape of it [the state] too, it’s like a lot of strangeness just travels the spine of the country and seems to land there… I think there’s some physics to it.”

Scientists—not just writers—have found there are a range of mental and physical health issues that arise when people live above 80 degrees Fahrenheit. One paper, based on 13 years of Australian data, “observed a positive association between ambient temperature and hospital admissions for mental and behavioral disorders.”

Other southern states, such as Louisiana and Mississippi, score worse on many shameful socio-economic indices. But people in general, and especially the media, don’t delight in pointing out those states’ failings or oddities, Ford noted. The endless parade of Florida buffoonery or repugnant political deeds rises to top of the news, she said, especially in the snootier and more closeted states.

“Northerners love to portray Florida as a land full of drug dealers, corrupt politicians, deranged old people, and immigrants all snarling traffic in their Hummers while releasing pet pythons into the Everglades. And to some extent, that might be true,” Ford concluded. “We love to laugh at Florida, but we also love to go there and give them our money."

Perhaps if Florida were not the fourth most populous state, didn’t have so many Electoral College votes, weren’t run by rabidly libertarian politicians, didn’t produce racist court decisions, and didn’t have endless bad crime stories on local TV, the rest of America could treat it like Alaska—which only forced the country to deal with Sarah Palin.

But Florida is the strangest state for lots of reasons, which websites like to count and recount and ponder and keep pondering. And until climate change floods the peninsula discovered 500 years ago by Ponce de Leon, the rest of American has to live with its weirdness.