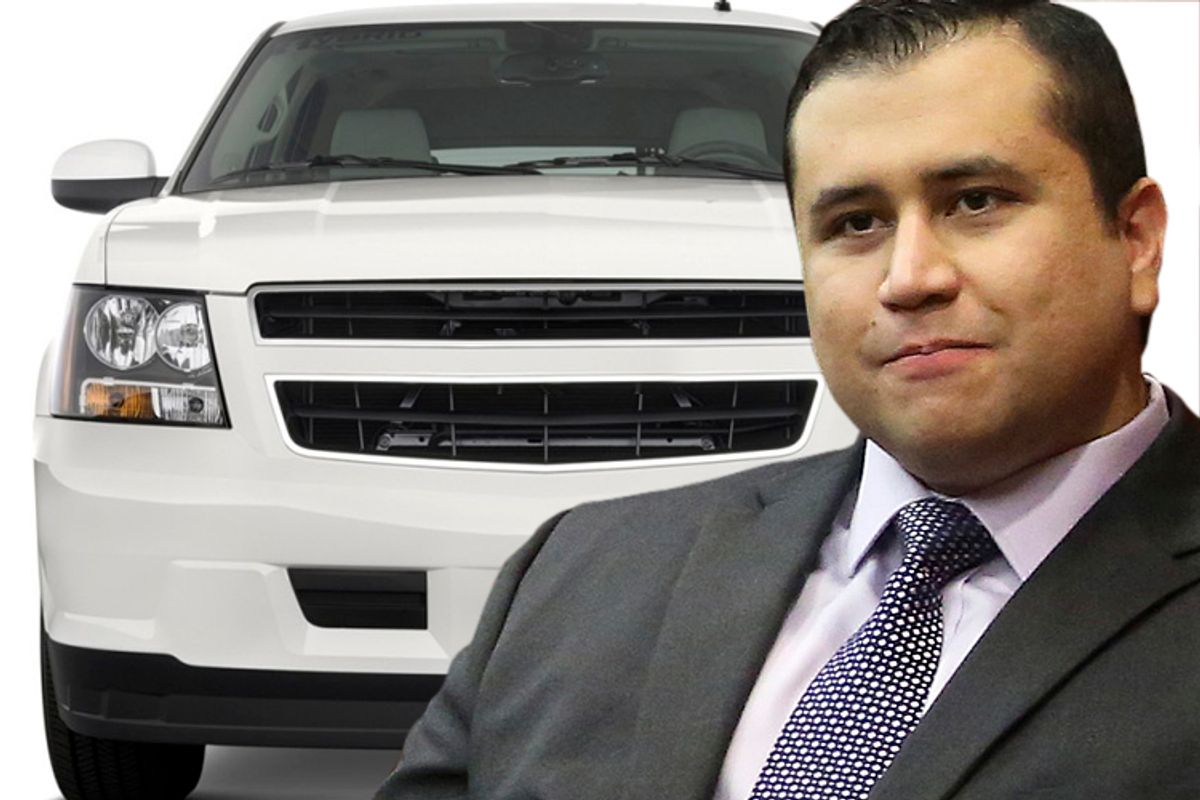 It seemed stranger than fiction, as even his lawyer acknowledged, that George Zimmerman's first appearance just days after he was acquitted for the killing of Trayvon Martin would be to rescue a nice family of four from their overturned SUV. But that's what reportedly happened on July 17, leading his defenders to call him a hero and some critics to claim the event was a hoax aimed at boosting his popularity.

It does seem like an odd coincidence: Zimmerman just happened to be on the scene of the crash at the right moment, and happened to have a fire extinguisher with him to put out the flaming car. And now the family he saved abruptly canceled the press conference they had planned to thank Zimmerman. It's all too much to believe for the Zimmerman Rescue Truthers, who emerged immediately after the news broke.

"Even if we had a videotape of the accident, they would still say it was made up. So you can't really respond to people who just don't want to listen to the truth," Zimmerman defense attorney Mark O'Mara told CNN. "The idea that this was made up -- it's just the same people who refuse to accept the jury's verdict, just want to be angry, just want to hate George Zimmerman, are still going to hate him."

He's probably right. As we've noted, conspiracy theories are basically impossible to stamp out. And in this case, the circumstances are just too weird, and the potential public relations benefit for Zimmerman -- and thus the perceived incentive to stage the scene -- too obvious to explain away for those who are upset about the verdict. Fox News, whose opinion hosts have pretty openly sided with Zimmerman, reported that at an NAACP meeting, "there was a lot -- a lot -- of skepticism, people saying they don’t believe a word of this."

"Zimmerman can pull someone from a burning car, but he can't a push 17-year-old, 150 pound boy off of him?" asked one tweeter. On Twitter, the skeptics appeared to be be predominantly liberal and disproportionately minorities -- the same kinds of people who have been pushing for harsher punishment of Zimmerman all along -- while others questioned the police officers involved.

"There's something fishy about this #Zimmerman Rescue," another person tweeted. "Feels too perfectly timed and convenient."

One blog advancing the conspiracy narrative that went viral posted screen shots of what appears to be the Facebook page of the officer who responded to the crash, which shows that he posted numerous photos and messages supporting Zimmerman days before and after the accident. Most criticized the media and liberals who turned the case into a race issue. "If Trayvon Martin had been killed in Afghanistan, Barack Obama wouldn't even know his name," reads one popular image macro the officer posted. Yet the officer, who posted about other activities of his duty life, didn't post anything about his run in with Zimmerman. The only reference to the accident was a few days later, when he linked to a local news story and wrote, "I sorta made the news..."

That conspiracy blog even claims that it has a source, whom it does not identify, who saw phone records showing that the officer alerted Zimmerman about the crash before authorities arrived so Zimmerman could end up in the police report and look like a hero. We asked the unnamed blogger for more info about his or source, but the blogger didn't respond.

Theorists have also speculated that Zimmerman might have a police scanner, given his work as a neighborhood watchman and his current fear for his own safety, and that he used it to respond to the crash before authorities could get there.

They also wonder why none of the multiple 9-1-1 calls mention Zimmerman, though some mention two men on the scene, and why O'Mara says his client didn't mention the crash when they met the next day. And why none of the family members in the crash mentioned the crash on their Facebook or Twitter pages. And why are there no photos of the crash? All the data points don't really make sense together -- was the entire crash staged, or did Zimmerman show up to intentionally take credit for saving the family? -- but various skeptics differ on how much of the accident they think was staged.

Still, even O'Mara acknowledged that the whole thing is a bit weird. "I will acknowledge it was coincidental four or five days after the verdict, but it was not set up, or staged. Really, do you think we would’ve set up a family of four on the side (of the road), destroying an SUV?" the defense lawyer told a local TV station.

The family Zimmerman helped save, he said, didn't feel comfortable coming forward given all the heat on Zimmerman at the moment. Indeed, TV news trucks have been staked out near their house, much to their dismay, but in refusing to speak with the press, even just to confirm that Zimmerman was on the scene, they've helped fuel the conspiracy narrative.