Eight political sex scandals, scored by how much they matter 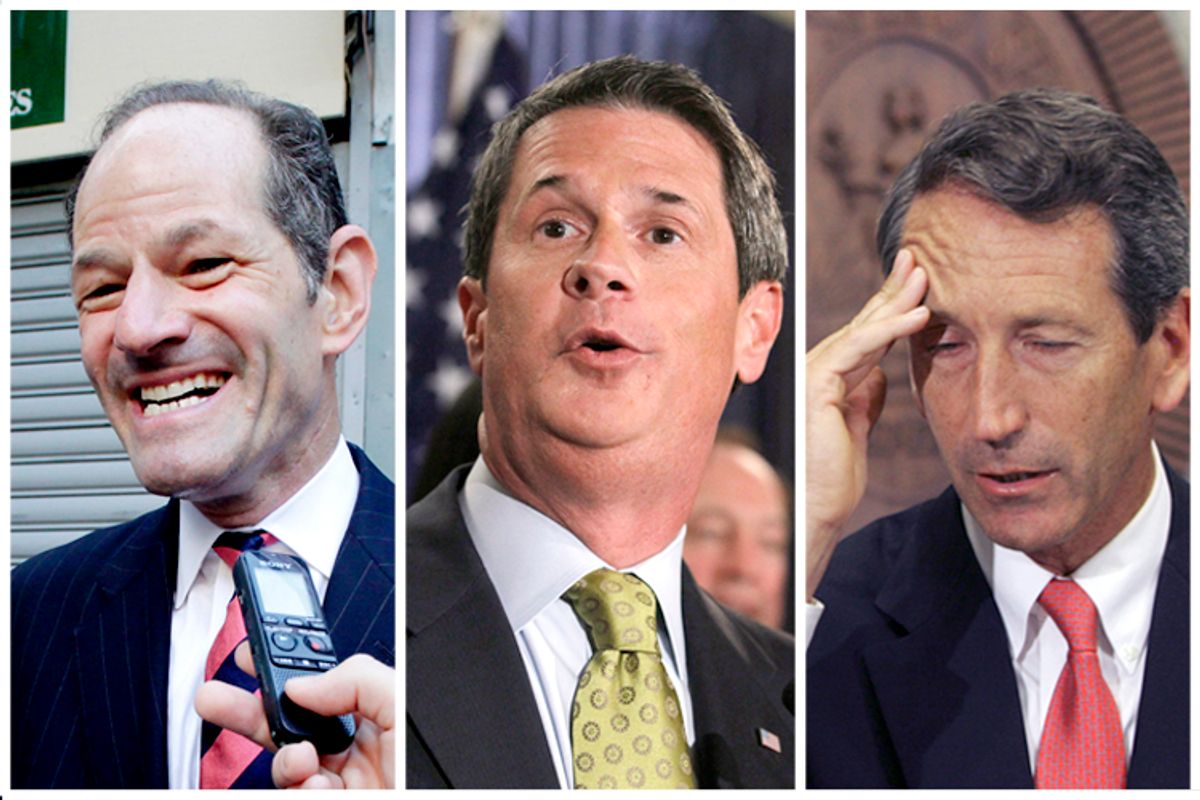 When a scandal breaks, several questions invariably arise: "Should this scandal matter? Should the media focus on it? Should voters be concerned about it? Should there be resignations, terminations, censure, prosecution, incarceration?" And what better way to address such questions than with a numerical scoring system? Rachel Maddow made an invaluable contribution to this field in her "post-Bill Clinton modern American political sex-scandal consequence-o-meter" (2011) during the first Weiner scandal. In said chart, Maddow based her scandal evaluation on two factors: the "creepy" factor and the "prosecutability" factor. The creepy factor, however, is dangerously subjective, as Maddow herself was the first to acknowledge -- what's creepy to one person may be acceptable to another.

It is this subjectivity which my system attempts to minimize. To achieve this end, I eliminate the creepiness factor, replacing it with the political hypocrisy factor. To determine the hypocrisy, one must look at rhetoric as well as policy. Do the politician's actions violate principles he has espoused? Do they violate principles he has put into law or attempted to put into law? Note that this is different from personal hypocrisy, something perhaps distasteful, but not, I would argue, politically relevant.

Instead of “prosecutability” we opt for “lawsuit/prison potential” as a category, since sexual harassment, for example, is not always criminally prosecutable but can give rise to a civil suit.

Another departure from the Maddovian method is the scoring. Maddow uses a primarily visual assessment, placing scandals relative to each other. My approach uses a more precise and quantitative method. The scandal receives 1 point for illegal non-criminal conduct, 1 point for misdemeanors, 2 points for felonies, 1 point for rhetorical hypocrisy, 1 point for policy-based hypocrisy. Points are removed for a statements or policies that mitigate said hypocrisy. Negative scores are not allowed.

As you will see, views on LGBT issues come up frequently in this sample. It is arguably hypocritical to cheat on a spouse while opposing people who you claim violate the sanctity of marriage. Whatever moral or religious basis you have for opposing same-sex marriage almost certainly applies to adultery.

Let's take a look at some recent scandals through this lens.

Anthony Weiner: sexting
lawsuit/prison potential: 0
rhetorical hypocrisy: 1 (never said anything about sexting, is socially liberal, received a 100% rating from the Human Rights Campaign. But initially told the public he had been set up and had not tweeted the photo. And then told the public he was done sexting.)
policy-based hypocrisy: 0 (never supported legislation on texting, has a consistently liberal voting record, when it comes to social issues, never sought to legislate people's sexuality or morality.)
Total score: 1

David Vitter: solicitation of prostitutes
lawsuit/prison potential: 1 (soliciting a prostitute is a misdemeanor.)
rhetorical hypocrisy: 1 (campaigned as a family values, socially conservative and Christian candidate. Compared same-sex marriage to natural disasters.)
policy-based hypocrisy: 1 (was one of the chief sponsors of the constitutional amendment to ban same-sex marriage.)
Total score: 3

Bill Clinton: affair with Monica Lewinsky and accusation of sexual harassment by Paula Jones
lawsuit/prison potential: 0 (if you think he committed perjury, see this.)
rhetorical hypocrisy: 1 (said, “I have long opposed governmental recognition of same-gender marriages.” Also lied to the public when he said “I did not have sexual relations with that woman.”)
policy-based hypocrisy: 1 (signed Defense of Marriage Act and Don’t Ask Don’t Tell.)
pro LGBT rhetorical record: -1 (said, “Discrimination or violence because of race or religion, ancestry or gender, disability or sexual orientation, is wrong, and it ought to be illegal. Therefore, I ask Congress to make the Employment Non-Discrimination Act and the Hate Crimes Prevention Act the law of the land.”)
pro LGBT policy record: -1 (banned sexual orientation discrimination in security clearances, signed an executive order protecting gay and lesbian Federal employees from discrimination and was the first President to have openly gay and lesbian people in his administration.)
Total score: 0

Newt Gingrich: affairs with Marianne and Callista Gingrich
lawsuit/prison potential: 0
rhetorical hypocrisy: 1 (compared same-sex marriage to paganism, stated gay people should vote for Obama and said, “Look, I think there is a gay and secular fascism in this country that wants to impose its will on the rest of us, is prepared to use violence, to use harassment… I think that it is a very dangerous threat to anybody who believes in traditional religion.”
policy-based hypocrisy: 1 (voted to impeach Clinton, voted against implementing a Domestic Partners ordinance, advocated rewarding high school girls who graduated as virgins.)
Total score: 2

Mark Sanford:  vanishing for 4 days while serving as Governor of South Carolina, claiming he had gone to hike the Appalachian Trail, while actually visiting his then-mistress, now fiancée in Argentina
lawsuit/prison potential: 1 (adultery is actually illegal in South Carolina.)
rhetorical hypocrisy: 1 (called Clinton a “rascal,” said the GOP should not support same-sex marriage.)
policy-based hypocrisy: 1 (voted to repeal the Health Care Benefits Expansion Act of which allows unmarried individuals to register as domestic partners, and be eligible for D.C. government health care, voted against civil unions, voted for a ban on gay adoption and voted to impeach Bill Clinton.)
Total score: 3

Luckily, if you are interested in using this scoring technique, you have tons of examples to work with.