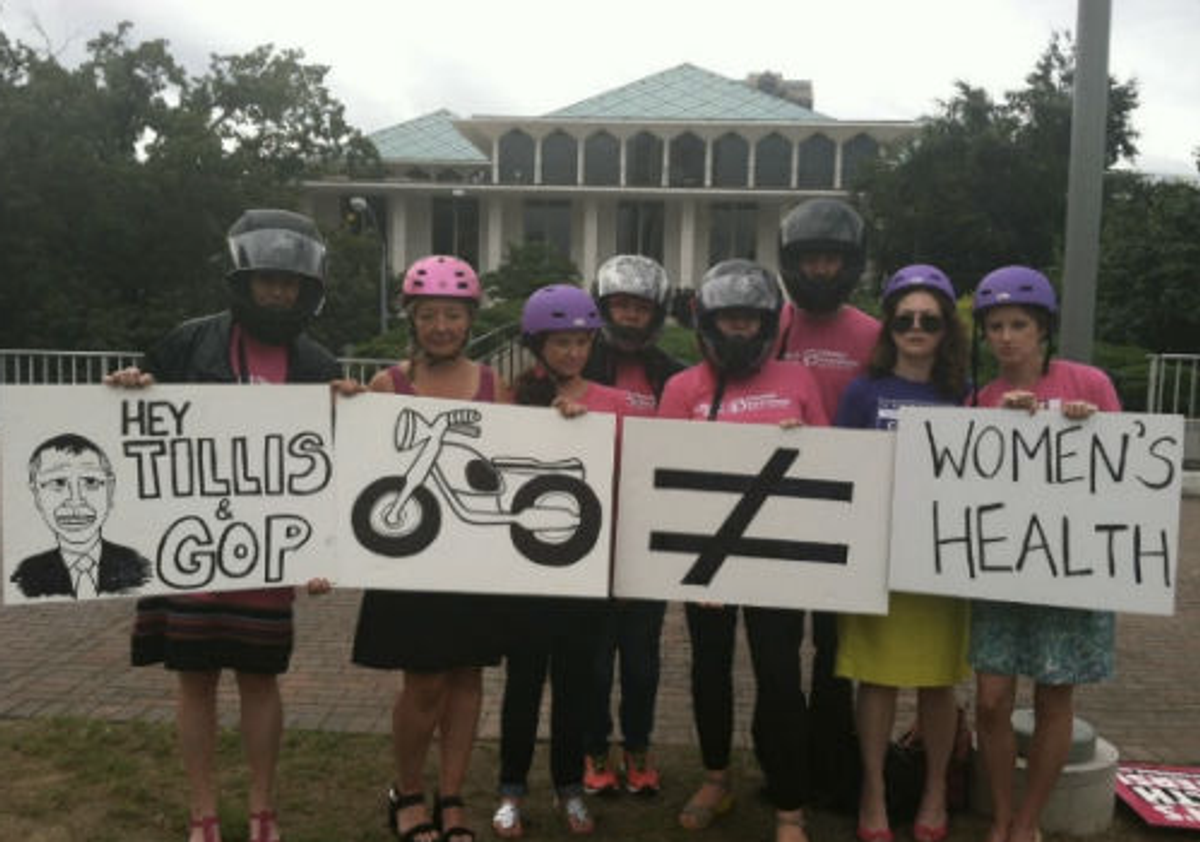 It just got a little bit safer to be a motorcyclist in North Carolina, and much, much more dangerous to be a woman in need of abortion care.

Members of the state Senate waited until late Thursday, the final full day of the session, to pass the sweeping abortion restrictions lawmakers quietly inserted into a measure on motorcycle safety earlier this month.

Senate Bill 353 eliminates insurance coverage for abortions for city and county employees, as well as from the state’s federal health insurance exchange under the Affordable Care Act.

And while language in previous versions of the bill requiring abortion clinics to meet the same standards as ambulatory surgical centers has been modified, the current measure mandates that state health officials come up with similar rules to more strictly regulate clinics, and so the impact is likely to be the same.

As Raleigh's News & Observer notes, only one of the state’s 16 abortion clinics currently meets such standards.

The measure now heads to Republican Gov. Pat McCrory, who is expected to sign it. While campaigning in 2012, McCrory vowed not to sign any measure attempting to restrict access to abortion in the state, but recently indicated that he believes the bill is not about curbing access, but about improving safety standards. (Sound familiar?)

"All eyes are now on the governor," said Suzanne Buckley, executive director of NARAL Pro-Choice North Carolina. "He made a campaign promise to voters back in October that he would not support any further restrictions on access to safe and legal abortion care in our state, and we are going to hold him to his word."

As in other states, North Carolina's proposed restrictions are likely to disproportionately impact low-income women and, because of new regulations on non-surgical abortion, women in rural areas without nearby access to clinics.

Bebe Anderson, director of the U.S. Legal Program at the Center for Reproductive Rights, denounced state Republicans' "fly-by-night tactics" to pass the bill: “The clear intention of these measures from the very beginning was to severely restrict women’s access to reproductive health care. If enacted, this law could disproportionately affect women in difficult economic circumstances at a time when the very same politicians who are advancing this legislation are also slashing North Carolina’s economic safety net to shreds."