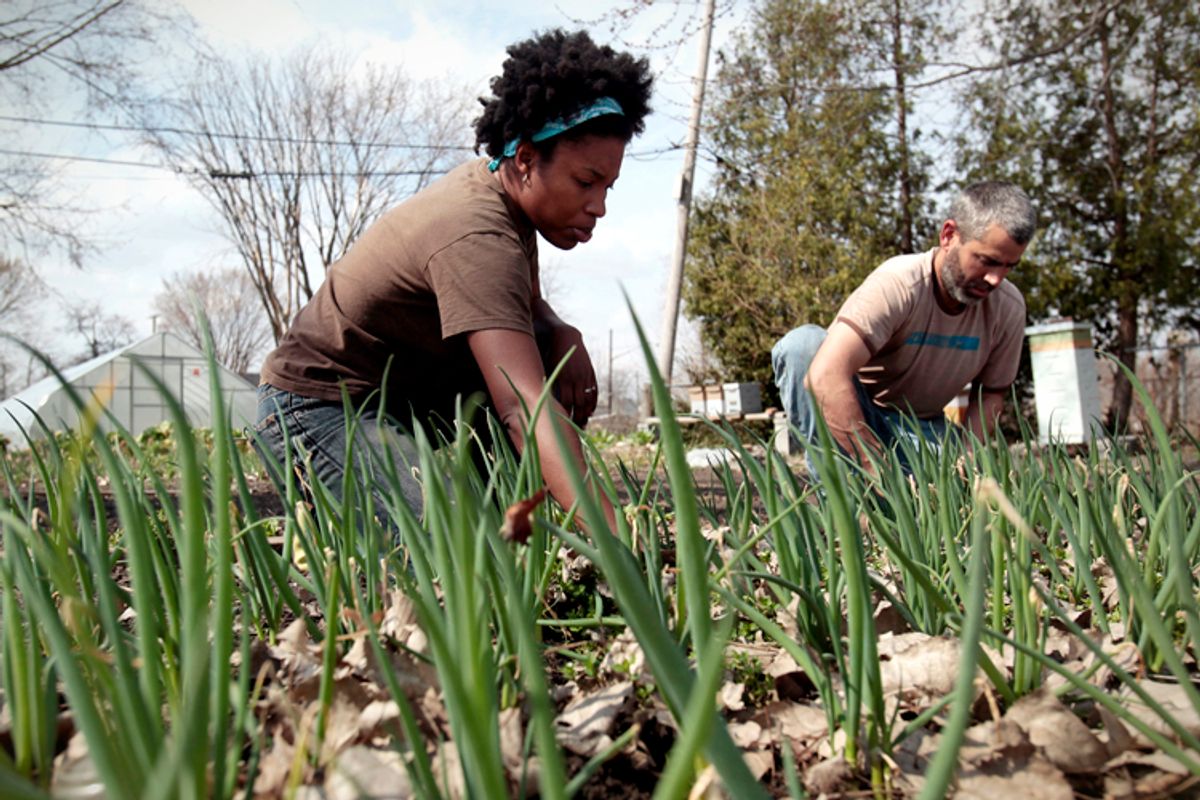 On a fine, bright afternoon, a beautiful girl named Celeste with brown skin and a fluffy ponytail walked me through a farm in East New York, Brooklyn.

While it was obvious to me that she loved it like it was her own, it belonged to the United Community Center, a collective that provides everything from fitness classes to English-as-a-Second Language classes and daily day care. The Center is a saving grace for girls like Celeste. Each year, it takes 30 or so teens from ages 13 to 17 under its wing, teaches them everything from hand-made irrigation using leftover tools and materials, to hosting their own bee hive and collecting their own honey, to composting, to… well, you get the picture.

The Center seems like the kind of grassroots effort a lot of people who talk about the lack of healthy food in low-income communities would love to support. But some of its members say the organizations intended to help them the most are ignoring them. They say the NYC Greenmarket – the city’s largest farmer’s market supplier -- doesn’t make it out anywhere near East New York with a full market because of a common assumption about low-income Americans: They aren’t interested in healthy food. They can’t afford to be interested in it. They don’t care.

But the people of East New York do care. And yet the never-ending debates around food politics -- debates that often center on what's supposedly best for low-income communities -- never seem to include their voices.

Celeste couldn’t be more proud of her contribution to the garden, or the garden’s contribution to the community. “People saw that there was a lot of violence on the streets, a lot of kids hanging around and doing bad stuff… they figured, ‘All right, one in three people are obese and we need to do something about it.’ They had rare food access, and only maybe three supermarkets with bad, rotten apples in it… and you don’t want to eat that stuff, you know?” she told me, as she made her way to the section of the garden that housed the scrap wood. The teens learn carpentry and build “community gardening beds,” as well.

Celeste is, without a doubt, incredibly informed. She’s bright, energetic, and spent almost a half-hour explaining to me the intricacies of creating an irrigation system that allows the garden to continue to flourish even when the city is running low on rainwater, all with a smile.

And I got the feeling that Celeste wasn’t the only one at the Center who could explain to me the joys of beekeeping. Or composting. Or the challenges of nutrition in a low-income community, at that.

In listening to the stories of the people who frequent the Center, you can’t help but notice a similar refrain. Farmer’s markets and fresh produce are, largely, out; bodegas and their processed fare are, unfortunately, in. On every corner, there's another store with the same look, same feel, same sorry-ass bodega cat, same deli meats, same row of $6 boxes of cereal. This is how people are expected to live in East New York, and its inhabitants are fed up.

“I eat what I can afford, and fuck anyone who thinks I should be starving on kale and rice cakes so I can be skinny. I’m doing this my way, I’m living my life.”

“My mother died from living off bodega food… I’m scared of that stuff. I don’t need a nutrition degree to know that what happened to my Mom ain’t right.”

When I stood in line at my own grocery store, I saw the cover of The Atlantic, proffering the long-standing idea that “junk food” could, in some way, “end obesity.” I had high expectations for an article that apparently had all the answers that the food industry giants – and all their resources, scientists, strategists, and marketers – did not, and was left disappointed. Not only did the article run short on legitimate framing of the anti-processed food argument and long on unnecessary, endless attacks of its supporters; the article, easily over 10,000 words, spent a mere pair of paragraphs discussing people who aren’t, as Freedman named them, Pollanites.

But why is that? It’s because the East New York farms – the Center either owns or facilitates, in some way, over 60 plots of land in the area, alone – are a rarity, right?

It’s so easy to strike a million keys to bash those pesky liberal elites who want us all to eat disgusting swiss chard and spend our entire pittance of a paycheck on freshwater, pole-caught salmon. Of course that’s a cover story. It’s the epitome of troll bait. (The only reason I didn’t actually buy the mag myself is because, well, I had to spend my entire pittance of a paycheck on goat cheese. Sue me.)

But, what complicates the picture is the fact that the anti-processed food debate isn’t only liberal elites against Big Food – it also consists of people who’ve watched their loved ones suffer at the hands of limited nutritional choices and, because they don’t always have the time to read up on the latest in the Times or wherever those fancy liberals get their nutrition info, just try to avoid “that shit” like the plague… even if it leaves them eating little more than brown rice, frozen veggies and unseasoned, unsalted chicken breast.

The problem I have with these articles, many of their response pieces and much of the opining that comes with them, is the fact that they all sing the same song, in the same key. The assumption is always that every person in America stands between a produce section - bustling with fresh fruits, crisp vegetables and bright herbs – and a McDonald’s parking lot. But in reality the problems with food in America are more complicated than that, and the solutions more diverse than Big Food versus Pollan.

Essays like the Atlantic cover and its predecessors and progeny are merely a means of masking anti-Pollanite rhetoric with concern-trolling. America's conversations about food politics are dominated by white men talking, taking pot shots at each other for fun and profit. It’s an old game, just as elitist as enjoying that $10 smoothie, just as naïve and ignorant as expecting that every neighborhood has a smoothie shop – instead of a Burger King – on every corner.

Communities like the one in East New York are not oblivious to what's happening to their loved ones, members of their community and society at large. They’re making their own solutions. Alas, because their choices to live healthier lives and eat better food are not as much of a ratings-grabber or link bait as, say, focusing on the extreme ends of the spectrum, their stories are never told. It's not always about obsessively clinging to curly fries or curly kale: perpetuating such a myopic view of the nutrition conversation in America results in meaningful resources like East New York never receiving the support or attention they deserve. When the grassroots efforts of hard working people have to be downplayed or outright ignored for you to make your point... it's time to change your point.

Let’s be real. The East New Yorkers may or may not know anything about Michael Pollan – “What does the name Pollan mean to you?” “Pollen? Yeah, in our flower garden over there” – and they may or may not know about Michael Moss, Mark Bittman, Eric Schlosser or Jamie Oliver. But they know that they contribute to The Obesity Epidemic® and, as such, they’ll undoubtedly contribute to the solution. Their stories deserve to be considered a contribution to the national conversation. Their lives matter. And, if we were honest with ourselves, we’d see that the implausibility of either side – because, no, neither $8 per pound organic chicken breasts nor “healthier Big Macs” are the answer – largely comes from the lack of diversity in the conversation. Diversity of race, diversity of class, diversity of experiences lived.

An attachment to the sentiment of “colorblindness” has left many believing that we are all, somehow, the same person, intended to sing the same song, all in the same key. We all live the same lives! We have the same responsibilities, the same resources, same options. We all ride the same crowded train to the same grocery overrun with crying children and double-wide strollers, and hold a handful of spinach in one hand and a box of Froot Loops in the other. We’re all “overweight” for the same reasons! An attachment to “colorblindness” has left us believing that there’s no need to diversify the contributions to the conversation. The most qualified members of society will contribute. That’s why it’s, mainly, White Men Talking. They’re always most qualified.

Except when they’re not.

When I think of communities like the one created around East New York Farms, the ones centered around co-ops, CSAs and other amazing resources helping people learn the tools to reclaim their health, I’m always amazed by and impressed with their determination. Despite being perpetually labeled as uninterested in fresh produce and accused of leaving the “fancier health food bodegas” empty, collecting dust, they trudge on. Building a farmer’s market that rivaled anything that could’ve been brought to the area from outside of Brooklyn, they carefully considered their needs, found the resources that’d deliver what they wanted, and worked hard to build it for themselves. If that ain’t American, I don’t know what is.

Take that same song, diversify the singers, diversify the keys, and enjoy the harmony of healthier lives together. It sounds so much better than White Men Talking.