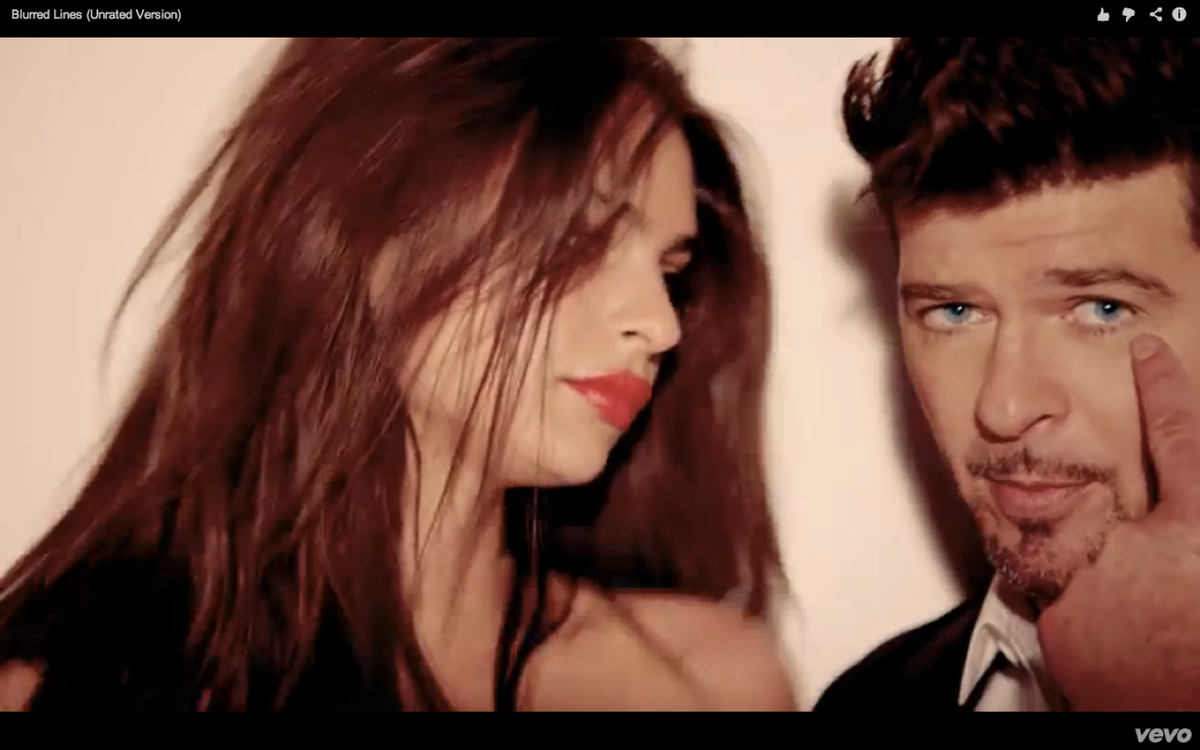 People calling the song offensive definitely have a strong case. After all, the song is about "liberating" a good girl by showing her that she actually wants "crazy wild sex" that she isn't asking for. Robin Thicke keeps repeating "I know you want it" while his musical partner T.I. casually mentions "I'll give you something big enough to tear your ass in two."

The only thing that's worse than the lyrics? The video. It shows three naked women (sorry, some have flesh-toned thongs and the occasional shoes) prancing around three fully-dressed men — an image that's now become all too familiar in our media landscape.

So, let's recap. The lyrics are rapey, the video overtly objectifies women and the only people worthy of clothes are men. I'm sorry, why are we arguing about whether a video that pretty much defines sexism is sexist or not?

If you ask Robin Thicke, the video is absolutely degrading to women. In an interview with GQ, he said, "We tried to do everything that was taboo. Bestiality, drug injections, and everything that is completely derogatory towards women. Because all three of us are happily married with children, we were like, 'We're the perfect guys to make fun of this.'"

Yes. Men who respect women are the "perfect" people to degrade them! Like they say, it’s funny! Cause this way, women never know who they can trust! I guess misogyny is like that expired brie you accidentally ate while you were drunk: you just need to get it out of your system.

What underlies this frankly depressing statement is that if we respect women, it's fine to demean them. The singer makes that painfully clear when he explains: "People say, 'Hey, do you think this is degrading to women?' I'm like, 'Of course it is. What a pleasure it is to degrade a woman. I've never gotten to do that before. I've always respected women.'"

Not only is it totally fine to demean women, it's actually fun.

Then, to add insult to injury, he tells us were all idiots because we care. "Right now, with terrorism and poverty and Wall Street and Social Security having problems, nudity should not be the issue," he continued.

YEAH HOLD YOUR HORSES, GUYS. It's not like women's objectification is linked to any other serious social problem ... like, I don't know, violence against women?! It's not like studies show that being exposed to images of objectified women gives men "greater tolerance of sexual harassment and greater rape myth acceptance" or makes them view women as "less competent" and "less human". It's not like singing about "blurred lines" will reinforce a culture that already trivializes the importance of consent. Back to Wall Street. I'm sorry, WHAT?

So if there's nothing "blurry" about about the male artist's misogynistic intentions, what about the women involved in the project? The video's female director, Diane Martel denies any sexist wrong-doing and dismissed Thicke's comments in an interview with Eric Ducker at Grantland. Emily Ratajkowski, the brown-haired model in the video agrees. In an interview with Esquire, she explained that the women in the video were "directed to have a sort of confidence, a sarcastic attitude about the whole situation," and that the "eye contact and that attitude really puts [them] in a power situation."

The stunning model (who I wouldn't recommend looking at unless you're ready for a dramatic drop in your own self-esteem) makes an interesting point highlighting the complexity of this topic. She explains that growing up with a feminist mother made her realize that her body could be a source of pride. "It's something very important for young women today to have that confidence. [The video] is actually celebrating women and their bodies." So according to Ratajkowski, naked female bodies on television can be empowering. She also positions the video as a critique of the misogynistic music video genre. "Pop music is great, but there's a lot of BS about the attitude of guys being super-gangster — that's why the whole video is silly. It's making fun of itself."

So what happens when the model in the song doesn't think the video is objectifying, but other women do? In other words, if a woman is objectified by the viewer, but she isn't objectifying herself, is she still an object? If a tree falls in the woods, but it doesn’t hear its own sound, did it make one.

The short answer is yes. Sexism can't be ironic because we're not over it. It's still massively prevalent. Men still benefit from it, women are still hindered by it. Most women in music videos are required to wear next to nothing, while men have the privilege of keeping their clothes on and earning the same degree of attention, or more. It's not ironic to put women naked in a music video because it's an extension of the crap that already floods our screens. It's not anything new, it's just more of the same old sexist garbage.

Moreover, the idea that consent is a 'blurry' concept is deeply ingrained in the way sexual assault is represented in the media, our culture, the education system and, yes, our judicial system. It's what drives many to doubt the veracity of rape allegations. It's what drives many rape survivors to never report their rapes. In fact, it's why rape is the least reported crime and why 97% of rapists will never see a day in jail.

Sure, Ratajkowski could have felt empowered and her performance could have given confidence to a handful of women, but does the personal benefit outweight the collective harm? Sure many men could have watched this video and got the joke, but what about those who didn't? What about the people who watched the video and internalized the message that women can be consumed like objects without consent because, you know ... sex is about "blurred lines" anyways.

Sorry, but there’s nothing subversive about having women and men take part in the same old stereotypes that perpetuate sexism and rape culture. If you want subversion, take a look at this. Now that's what I call empowerment.

How do you feel about "Blurred Lines"? Sexist? Ironic? Feminist?