Is the bully pulpit dead?

Barack Obama keeps giving speeches and the result is predictably the same. Here’s why he should keep trying 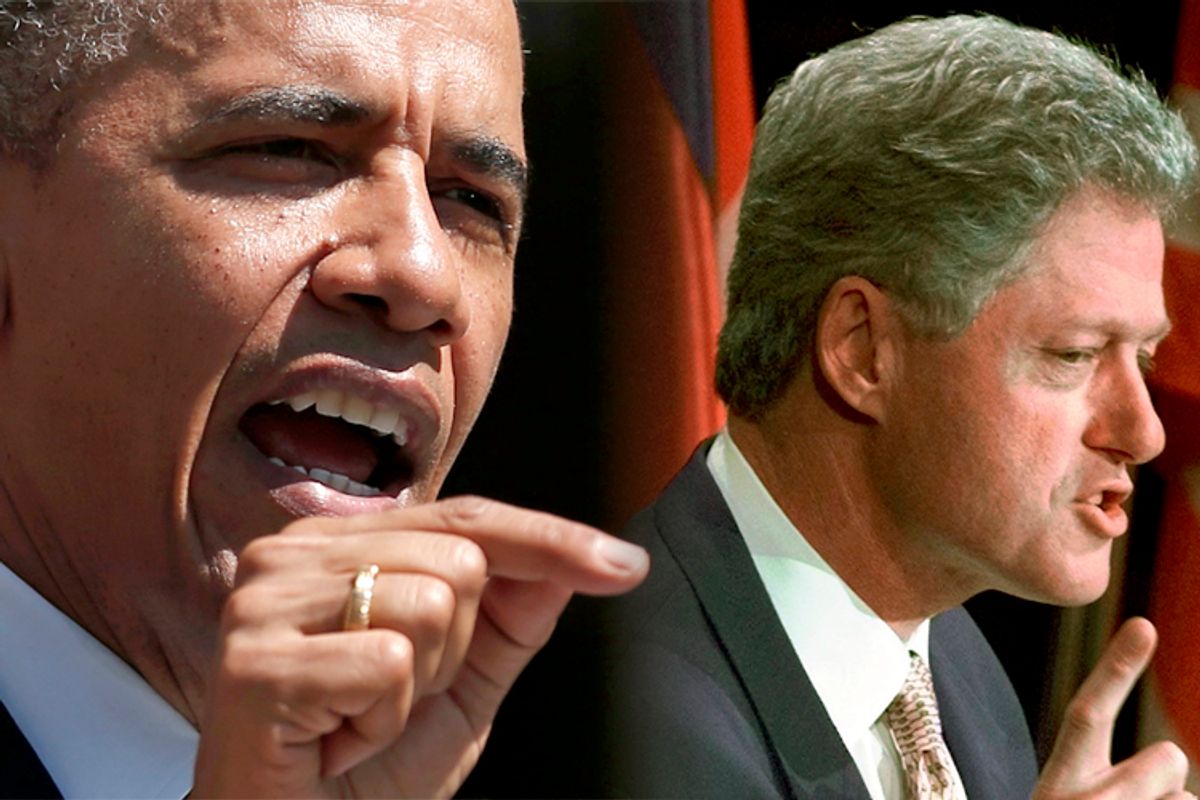 The reaction to Barack Obama’s speech on the economy this week raised a good question: why should presidents even bother?

Certainly not to win the battle of public opinion. That’s not just dead; it was never alive in the first place. The theory that presidents could get their way by going over the heads of Washington directly to the people, and then to have the people rise up and demand action, has been tested often and has never been known to be particularly effective.

Consider, for example, the first-ever big attempt to use the “bully pulpit” for policy change. Before computers, even before TV, Woodrow Wilson barnstormed the nation attempting to rally support for the Treaty of Versailles. What did it get him? Not only did it fail to win over reluctant senators, but it nearly killed him.

In the era of Air Force One and cable network coverage, the physical demands of traveling the nation in support of the president’s program may no longer be a factor. Still, the basic logic of the situation remains. The people who watch presidential speeches during normal times are those who are most interested in politics; those who are most interested in politics are most likely to be solid partisans; and solid partisans are least likely to change their minds when exposed to new information. Ezra Klein did a nice write-up on the research on the topic a while back; basically, those who have studied the question have found that the logic holds, and presidents can’t trump Congress or anyone else by making speeches.

That doesn’t mean, however, that the bully pulpit is useless.

For one thing, presidents do have the ability to set the agenda. Both in terms of broad topics – something the president talks about is far more likely to get news coverage than something he ignores – and in terms of specific proposals. Not just news coverage, either; to some extent, he can drive attention from Congress and other policy-makers. Obama wasn’t able to get the gun safety legislation he wanted passed and may yet fail to get comprehensive immigration reform enacted into law, but in both cases he was able to keep them much higher on the national agenda, including the congressional agenda, than they would have been had he not spoken out.

For another, presidents may not have the ability to persuade opponents or true independents to support their programs, but they can educate their supporters. That is, people identify with a political party, and support presidents, for all sorts of reasons. One voter may support Obama because of marriage and other LGBT issues; another may support him because she had a pre-existing condition and couldn’t get health insurance; another because he was out of work in 2008 and got a job in 2009; another because she’s strongly pro-choice on abortion; yet another may support him simply out of ethnic solidarity. None of that implies any particular position on specific economic issues. In fact, many voters may have no particular position on many public policy questions – and Obama supporters without otherwise strong views are going to be very receptive to the president’s speeches on such topics. That won’t have an immediate political effect, but that doesn’t mean it’s not meaningful.

For that matter, we don’t really have any measure of long-term effects of a president’s speeches on public opinion. It may be – my guess is it is – similar to campaign effects. We know that in presidential general elections, the effect of most electioneering is a net zero, in large part because both sides have an abundance of resources and so swing voters are exposed to roughly equal pressures from both sides. A campaign would be very foolish to take that “net small effects” finding, however, and choose to abandon electioneering; if only one side campaigns, then the effect can be quite large – as anyone who has studied lopsided House elections can readily see. It’s certainly possible that long-term effects of presidential rhetoric are similar; if liberal presidents stayed quiet while conservative presidents constantly sold their views, then over the long haul people really would move towards conservative views.

One last reason to keep using the seemingly useless bully pulpit: Beyond the question of persuasion, there’s also the question of inspiration, especially at the (future) elite level. Think of all those who claim to have been inspired to make a career in politics by John F. Kennedy, or by Ronald Reagan. Of course, there’s no way to prove a real causal connection between “Ask not…” and, say, Bill Clinton’s presidency. Nor could the relative handful of those who are really inspired by a president be statistically found out of over 300 million Americans. So we’re not likely to have any academic studies proving any such effect. That does not mean, however, that it can’t be very real – and if there’s even a chance that it is real, then presidents should take it.

Of course, there are also straightforward payoffs from barnstorming. It can be an opportunity for the local party to reward those who worked hard in the recent campaign, and it can be part of mobilizing for the next election; during campaign season, the president often mixes public speeches with fundraisers and other active electioneering, but even without that it’s still a nice opportunity for local supporters.

So, yes, all the debunking of the bully pulpit is absolutely true, but Barack Obama should be out there doing it anyway. After all, the opportunity cost isn’t very high. Presidents, of course, are very busy, but the time spent on public speeches isn’t that significant. And the payoffs are potentially pretty good. Even if they don’t include forcing Congress to do what the president wants them to do.