Are any of us really "neurotypical?"

If you're close to someone with autism (as I am), the fascinating PBS film "Neurotypical" is a must-see 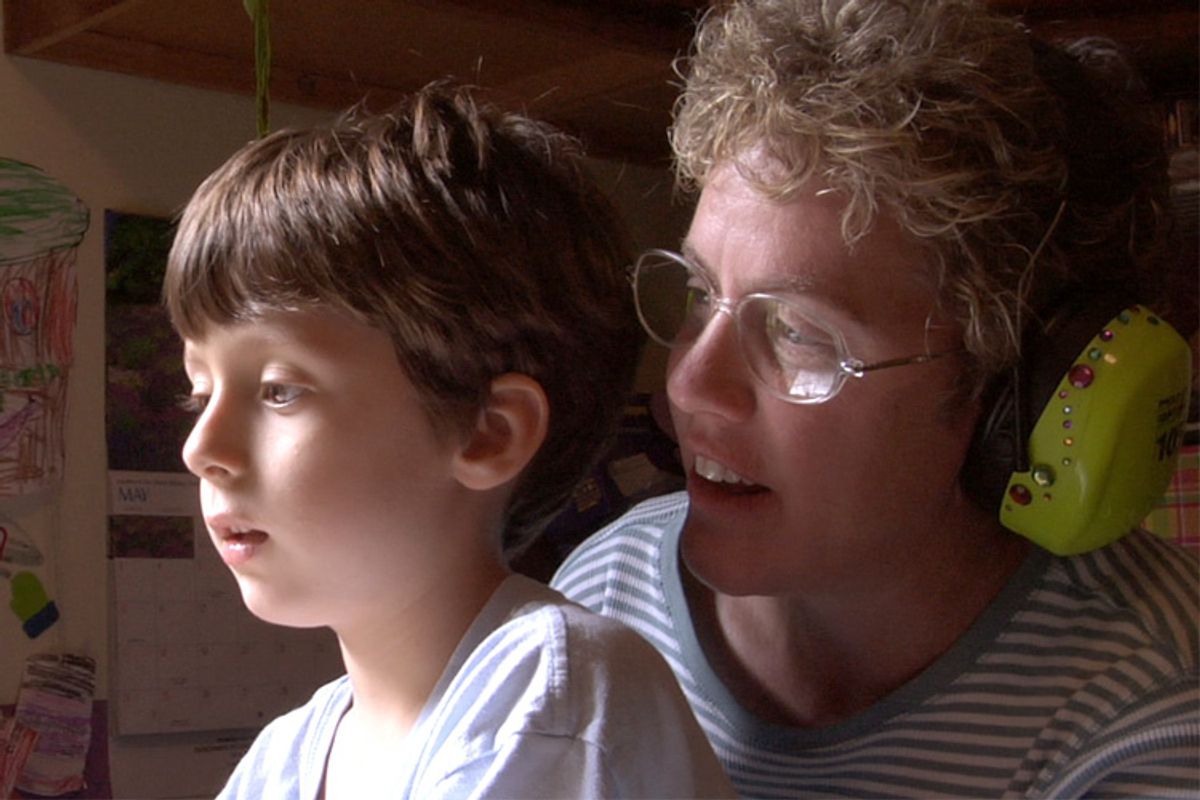 As millions of parents have found out before me, having a child on the autism spectrum makes you ask yourself all sorts of questions. These include: How normal am I, and how do I know? Where is the dividing line between “neurotypical” responses and those that suggest autism? Is it better or worse that we now have a label to attach to a large subset of children and adults who previously would have been viewed through some other prism, as being odd or poorly socialized or mentally deficient or even insane? (Or, for that matter, as geniuses: Some people have hypothesized that autism is an evolutionary mechanism for producing scientists and engineers, who even when “normal” are not noted for their social graces.)

I sympathize profoundly with every parent or family member who resists diagnosis and labeling and the entire taxonomical effort of the scientific-medical bureaucracy, especially since it’s of such limited usefulness to people with autism and their families. I have been there, I promise you. Every child with autism is different (just as every child of every other variety is different), and no parent wants to see a unique and precious individual for whom they would gladly lay down their life be reduced to a cryptic line of psychiatric gobbledygook. If the phrase “PDD-NOS” strikes a chord with you, I’ve been there too. All the same, I would answer that last question above by saying yes, it’s much better that we have the label. It has almost certainly prevented unnecessary suffering, but we have to be honest about the fact that we don’t really know what it means.

In Adam Larsen’s documentary “Neurotypical,” which airs Monday night on PBS stations and streams for the next month on the “POV” website, we meet a middle-aged I.T. professional and autism advocate named Wolf, who talks about the way his middle-class African American parents freaked out when he failed third grade and had to repeat it. It was a moment, he says, when he began to understand the inscrutable demands of the world around him: When people taught you things, you were supposed to retain the information and summon it up on command. When a doctor who figured out that Wolf was probably autistic asked him how he’d been doing so well up to then, nine-year-old Wolf explained that he had worked out systems to respond to everyday situations – in fact, a “system of systems.” Whoever that Southern doctor was in 1970-whatever, God love him, he told Wolf to keep on developing his system of systems, and told his family that whatever they were doing to support him was working pretty well.

The result of all that system-building was an adult man who has turned what could have been a severe disability into a source of strength, and who has led what society considers a highly functional existence. But here is my question: Don’t all of us, every day, respond to social interactions with learned scripts and systems of systems? Granted, the process is not usually as conspicuous or as difficult as it was for Wolf, who says he has never had an intimate relationship because he finds it acutely painful to be touched. (And thereby has avoided the single most troublesome aspect of human life.) I suppose those of us who become sorority presidents and network news anchors don’t feel social unease at all or, more likely, have learned to squash it with superior willpower. But I suspect the vast majority of human beings feel moments of social awkwardness and even profound alienation. I certainly identified to some degree with the young woman in “Neurotypical” who explains that she had to learn that making small talk at a coffee shop or in an elevator was an important social leavening agent, and did not necessarily mean that other people were blithering idiots who had nothing more important in their heads than the weather, the traffic and celebrity gossip.

Or maybe that’s just me. In contemplating my son’s autism diagnosis and the personality of his twin sister, who is neurotypical but distinctly peculiar, I’ve thought a lot about the psychoanalytic notion that mental illness is just an exaggerated form of normal behavior. (A normal person, Freud observed, is only “normal on average,” and some aspects of his or her personality will approximate those of a psychotic person.) Autism strikes me as philosophically and perhaps medically similar, and like any other parent of a child with a diagnosis, I’ve begun to wonder about my own position on the neurological spectrum. There’s little doubt that I qualify as neurotypical (as does my wife), but at times I identify strongly with our son’s behavior. Some people have begun using terms like “neurotypical but odd” to indicate those of us who lack the clear behavioral markers of autism, but feel a milder version of the same struggle to engage the social world in appropriate and expected ways. No doubt that lacks scientific rigor, but there isn’t much of that to be found in this field at present (although brain research is pushing the boundaries of knowledge further every year).

When my son takes over the dinner-table conversation with an extended monologue about electronics or computer programming, well past anyone else’s capacity to pay attention or even feign interest, I think to myself: Hell, I’ve done that too, more often than I’d like to admit (although with different subject matter). My father, who was a prominent academic in a specialized field of linguistics understood by almost no one, did it virtually every night. On the other hand, when my son wanders away on a crowded Manhattan street because he’s noticed a model of corner-bodega ATM he’s never seen before, I think: I don’t get this kid. (At age 4 or 5, he liked to stage sneak attacks on the checkout registers at the rural supermarket in our upstate New York town, wiggling under the counter while the adults were distracted and joyously beginning to ring up imaginary transactions.)

One problem with the term “autism” is that it encompasses such a wide range of behaviors and responses that it can seem completely contradictory: Wolf can’t stand to be touched, but my son craves physical contact of many kinds; some people with autism disorders rarely or never speak, while my son has quite the opposite problem. “Neurotypical” is an important film because it’s largely told from the perspective of people with autism, talking about their strategies for communicating with the so-called normal world. My wife uses the expression “hacking autism,” which in our son’s case isn’t even a metaphor; at a recent family reunion he went around the house with an iPad, taking pictures of his aunts, uncles and cousins and labeling them. (He now understands that he has unusual difficulty attaching names to faces.)

Most of the interviewees in Larsen’s film are adults and teenagers who have developed a sophisticated understanding of the neurotypical universe and can discuss it with considerable wit. I especially enjoyed the cynical perspective of a long-haired, thirtyish guy named John, who explains that all you need to do to hold a convincing conversation with a neurotypical person is to say the other person’s name a lot – “their favorite word in the whole wide world” -- and repeat the last three or four words of whatever they just said. I’m afraid that’s distressingly accurate, and by the end of the film John has successfully acquired a neurotypical girlfriend. Then there’s Maddi, a teenage girl who talks about expending a lot of time and effort on overcoming her discomfort with eye contact, only to discover that in high school the cool kids never make eye contact anyway.

I found all these stories both fascinating and richly valuable, including the film’s portraits of two marriages between autistic and neurotypical people, one of them apparently thriving, the other evidently on the rocks. I'm going to get hold of a digital copy and show it to my son when he's a couple of years older. These histories may seem less useful, however, to someone like Richard Everts, the director of a moving travelogue film called “The United States of Autism” and the father of an adolescent boy who hasn’t spoken for more than 10 years. All people with autism, no matter how “high-functioning” society deems them to be, will struggle with social communication for the rest of their lives, but there’s no question that for some people along that wide spectrum the barriers are more daunting and the hacks more demanding.

Perhaps “Neurotypical” should be watched along with Everts’ film or, better still, Gerardine Wurzburg’s remarkable 2011 documentary “Wretches & Jabberers,” which captures the world travels of two largely nonverbal middle-aged autistic men who spent most of their lives isolated in institutions before learning to communicate through electronic devices. That film hit me with the force of revelation – those men had been assumed to possess low intelligence and poor cognitive skills, which wasn’t remotely accurate. It also offers one of the few unambiguously benevolent uses of computer technology. A quarter-century after “Rain Man,” which depicted (with reasonable accuracy) a version of autism so rare it probably affects 1,000 or so people on the planet, we’ve come a long way in understanding a set of syndromes that may reflect a heightened version of social difficulties we all share. But people with autism still have so much to teach us – and not just, as I will remind my son at some point today, about programming in C++ or building paper airplanes.

”Neurotypical” airs Monday night on PBS stations and streams from July 30 through Aug. 29 on the “POV” website. “The United States of Autism” opens Aug. 9 at the Quad Cinema in New York and Aug. 16 at the Playhouse 7 in Pasadena, Calif., and will screen at various other venues across the country. “Wretches & Jabberers” is available for streaming from online retailers, including Amazon and iTunes.