The 6 most disturbing fat-shaming cases in recent memory

A judge ruled that casinos can police waitresses' weight -- and sadly, fat-shaming is still rampant elsewhere too 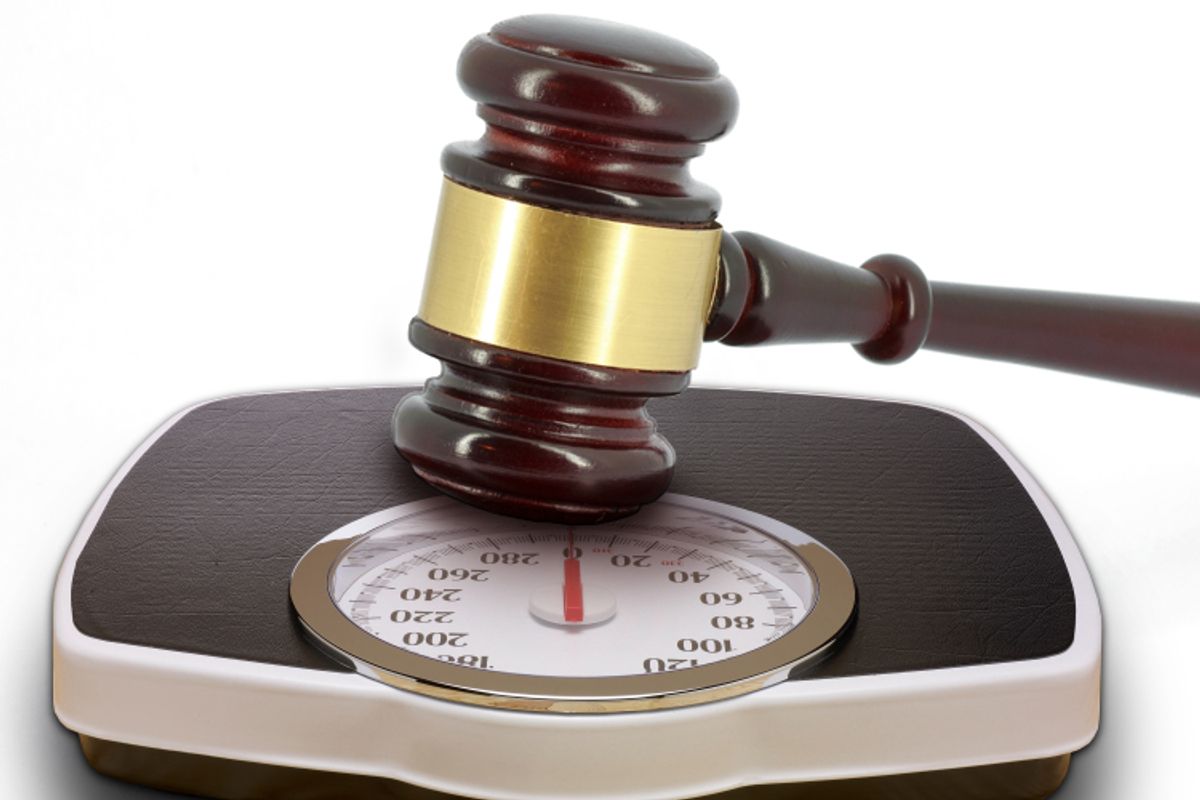 A recent study suggests that weight-based discrimination can cause weight gain. People who reported facing discrimination were 2.5 times more likely to become obese in the four-year study period, and people who started out obese were three times more likely to remain so if they were discriminated against. This news makes the widespread and pervasive shaming faced by people considered overweight or obese that much more disturbing -- as well as downright counterproductive. Here are six places you can allegedly find discrimination against people considered overweight.

Casinos: Twenty-two female cocktail servers sued the Borgata, an Atlantic City casino, over its policy prohibiting women from gaining 7% of their initial body weight. The women allegedly faced mandatory weigh-ins and were told to take laxatives or stop taking prescription medicine in order to stay thin. Atlantic County Superior Court judge Nelson Johnson ruled that this was perfectly legal, writing, “The Borgata Babe program has a sufficient level of trapping and adornments to render its participants akin to ‘sex objects’ to the Borgata’s patrons... Nevertheless, for the individual labeled a babe to become a sex object requires that person’s participation.” I feel so much better now. And I'm sure the Borgata Babes do, too.

Car dealerships: Joseph Whittaker claims that he was fired from his job as a manager at America's Car-Mart, of Jefferson City, Mo., because of his weight. Whittaker argues that though he is obese, he was, "at all times relevant, able to perform the essential functions of his position with defendant, with or without accommodation."

The Boy Scouts: The Boy Scouts website describes its annual national Jamboree as "50,000 Scouts, Venturers, volunteers, and staff from all over the country, all gathered together for one big celebration of Scouting." The logo for the "jambo" reads "ARE YOU IN?" Well, not if you have a body mass index (BMI) or 40 or greater, because the jamboree "cannot accept for participation any applicant with a BMI of 40.0 or higher." The National Association to Advance Fat Acceptance thinks "this decision promotes bias and negative attitudes and furthers the discrimination against boys of larger body size." They urged the Boy Scouts to "reconsider their discriminatory practices and admit camp attendees NOT based on their physical fitness, NOT based on their body size, but based on their active status as a boy scout."

Pediatrician Dr. Jennifer Shu said: "Any organization can make their own rules, but as a pediatrician I feel like we should be promoting physical activity for everybody, be as inclusive as possible, and only exclude from activity if there's a physical threat to their health." This exclusionary policy will come as no surprise to those who are aware of the Boy Scouts' decision to maintain its ban on gay adults.

Graduate school: Geoffrey Miller, a professor of evolutionary psychology at the University of New Mexico and a visiting professor at NYU, tweeted the following not very evolved tweet: "Dear obese PhD applicants: If you don't have the willpower to stop eating carbs, you won't have the willpower to do a dissertation. #truth." This, unsurprisingly, provoked a backlash. But Miller's idea is a good indicator of the discrimination aspiring academics face over weight. Jacob Burmeister, a Ph.D. student in clinical psychology at Bowling Green State University, found that graduate school candidates with a higher body mass index who did face-to-face interviews got into schools at a lower rate than applicants with a lower BMI or overweight candidates who had phone interviews.

Water parks: After losing 100 pounds, Madelyn Sheaffer, of Independence, Mo., finally felt comfortable donning a bikini. But, allegedly, the employees at the Adventure Oasis Water Park weren't feeling the look. Sheaffer says two of them approached her while she was in the pool with her niece and nephew, told her that her bikini bottom was too small and said she had to put on shorts. Sheaffer recalls, “I just felt like I was singled out... I felt like it was both age and body discrimination...There are 16- or 18-year-old girls wearing just the same amount and no one’s criticizing them or making them feel ashamed or feel uncomfortable in their bodies.” Sheaffer asked to speak to the employees' superior -- she says he told her to put on shorts or leave. Sheaffer then asked for them to call the police so she could file a report. When they came, they removed her. The water park later referred the matter to the city manager, whose assistant said: "the facility made the call and we rely on their judgment."

The entire country of New Zealand: The nice news is that the United States is not alone in its rampant discrimination. The nation of New Zealand is reportedly denying a work visa to South African chef Albert Buitenhuis, who weighs 286 pounds. A spokesman for the country's immigration service explained: "It is important that all migrants have an acceptable standard of health to minimise costs and demands on New Zealand's health services." Now Buitenhuis and his wife face deportation. The couple are especially surprised because their visas were always renewed in the past, and Buitenhuis actually weighs less now than he did when he moved to New Zealand.