Amazon is everything wrong with our new economy 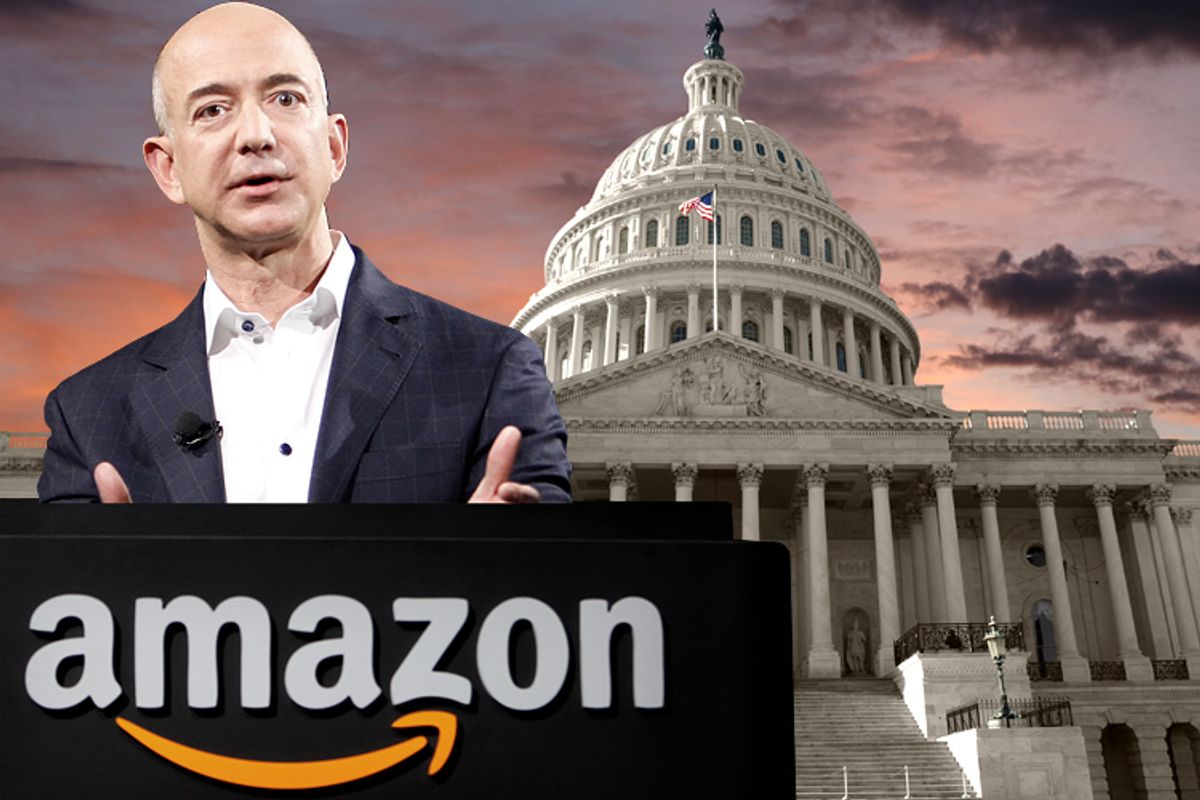 President Obama is giving a big economic speech at an Amazon warehouse in Tennessee later today to, as a spokesperson explained, highlight "an example of a company that is spurring job growth and keeping our country competitive." It's part of a tour highlighting the president's commitment to the middle class, and Amazon eagerly played along by announcing Monday that it is creating 5,000 new jobs at its distribution centers nationwide.

The White House calls them "good, high-wage jobs," and Amazon touts the benefits it offers workers, but many critics say Amazon, rather than being a model of the solution, is exemplary of everything wrong with post-recessionary America. When I called up Nelson Lichtenstein, the director of the Center for the Study of Work, Labor, and Democracy at the University of California, his first response to news of Obama's speech was an exasperated, "Oh, Jesus."

"They're investing in America, that's true. Amazon is growing rapidly, but they're not creating good jobs. They're creating insecure, temporary, attenuated jobs, which are reproducing all the pathologies of a two-tier labor market and a world of inequality -- that's what they're creating," Lichtenstein said. "And they're a fabulously successful company with a new technology that could create a solid working class, but they chose to instead create something that looks like it's out of the 19th century."

Mac McClelland detailed her harrowing experience working as a temp in a Mississippi fulfillment center for Mother Jones. It's a story of countless minor indignities and banal abuses, horrendous conditions and constant threats of termination, and a Kafkaesque maze of subcontractors and staffing agencies, all endured for an hourly wage that was essentially impossible to live on. The warehouse wasn't owned by Amazon, but her story is typical of the tens of thousands of low-wage temp workers who toil in fulfillment centers across the country, experts and other former employees have said. These are, unfortunately, typical of the kind of jobs created after the Great Recession, as a recent report from the National Employment Law Project explained.

That's not to say there aren't good, full-time jobs at these fulfillment centers -- there are -- but as Dave Jamison notes, they tend to be skilled direct-hire positions, like managers and forklift operators, while the vast majority of workers are unskilled temps, like "pickers" who find goods on shelves for shipping. Of the 4,500 jobs at the Chattanooga distribution center Obama will visit today, 3,000 are seasonal temps, the Times Free Press reported in 2011 after the center opened.

The fact that Amazon is promising to create 5,000 new full-time jobs with health care, 401(k) plans and company stock awards is certainly positive, and hopefully a sign of change, but is atypical. While Lichtenstein said he was't aware of the specific conditions at the Tennessee center, the use of "permatemps," who usually don't get health care and other benefits, and subcontractors is well known at other Amazon centers, like those in Southern California, Pennsylvania, New Jersey and Illinois. "So I have to think that that's the standard operating procedure for Amazon, which is building these things like mad all over country, creating this sort of antediluvian structure of labor," he said.

In Pennsylvania, an Allentown Morning Call investigation found brutal heat, mandatory overtime, unresponsive managers and delays in payments to employees. The story was the same in Kentucky and elsewhere. Reporters from the Seattle Times found workers who toiled in dangerous conditions but dared not question managers. "As long as my body holds up, I will keep working. But the way it feels, I don't know how long that will be," one worker said, explaining that she saw no other options for employment.

Still, there's no question that Amazon has been phenomenally successful, creating tens of thousands of American jobs and contributing billions to the economy. Overall, Amazon says it employs 20,000 workers in its U.S. fulfillment centers, out of a total worldwide workforce of 97,000, which includes thousands at its Seattle corporate headquarters and other U.S. offices. It's a classic question of economic tradeoffs. The use of temps helps keep labor costs down, which allows Amazon to hire more workers and reduce prices for consumers, but at the cost of job quality for current employees. And with Amazon's profits in the red, and an apparent supply of cheap labor, they may have little room to boost wages.

Meanwhile, independent booksellers are up in arms about Obama's visit to Amazon. They say that they create more and better jobs than Amazon does at its fulfillment centers. “We cannot believe this is your vision of job creation and the future of American middle class,” the New England Independent Booksellers Association and the New Atlantic Independent Booksellers Association wrote in a letter to President Obama. “We would hope your administration would be standing with Main Street, rather than explicitly or tacitly endorsing [Amazon's] practices.”

Oren Teicher, the CEO of the American Booksellers Association, wrote that for every $10 million that shifts from bricks-and-mortar stores to Amazon, 33 retail jobs are lost. “That would mean, for 2012 alone, Amazon cost the U.S. 42,000 jobs just last year,” he wrote to Obama. Other booksellers charged that Amazon is an illegal "monopoly," adding, "it's hard to imagine the DOJ opening a proper antitrust investigation of a company that has the President of the United States dropping in to laud the company and spend some time in one of its warehouses."

In Washington, Amazon has invested heavily in recent years, spending $2.5 million on lobbying efforts last year and more than $850,000 in the first quarter of 2013 alone, according to lobbying disclosure forms filed with the Senate. That's up from $2.2 million in 2011 and less in previous years.

The company's top agenda item in the capital is to impose a national sales tax on goods purchased online. It may seem odd that one of the world's largest retailers would want to tax itself -- indeed, other online merchants like eBay oppose the tax -- but Amazon says a national law is better than a patchwork of state regulations. And by playing ball, the company can help mold the bill in its favor. Obama also supports the tax, so Amazon's lobbying and political cover on the issue may have ingratiated the company with the White House.

Meanwhile, Amazon has been expanding into the government marketplace, recently winning a contract to build the CIA's cloud computing system and another with the State Department to distribute tablets loaded with American content around the world in a kind of Kindle-diplomacy.

But the fact that Obama is seemingly endorsing Amazon's employment practices underscores just how far we've come from the days when good, unionized work at auto companies and factories was easy to find and promised uneducated workers a good life. A job at a distribution center is certainly better than no job, but it seems a far cry from the vision for the middle class that the president lays out in his speeches. And by speaking at Amazon just days after he expounded to the New York Times about income inequality, Obama seems to be acknowledging that the old world is in the past and never coming back.

"I was once quite hopeful that this was how we would reconstitute the blue collar working class," Lichtenstein said of distribution centers. "But they don't have benefits and the turnover rate is enormous, and so you actually have all the pathologies that are generated by that kind of employment situation."