Amazon is worse than Walmart

The company's war on bookstores and book culture is increasingly supported by, yes, the Obama administration 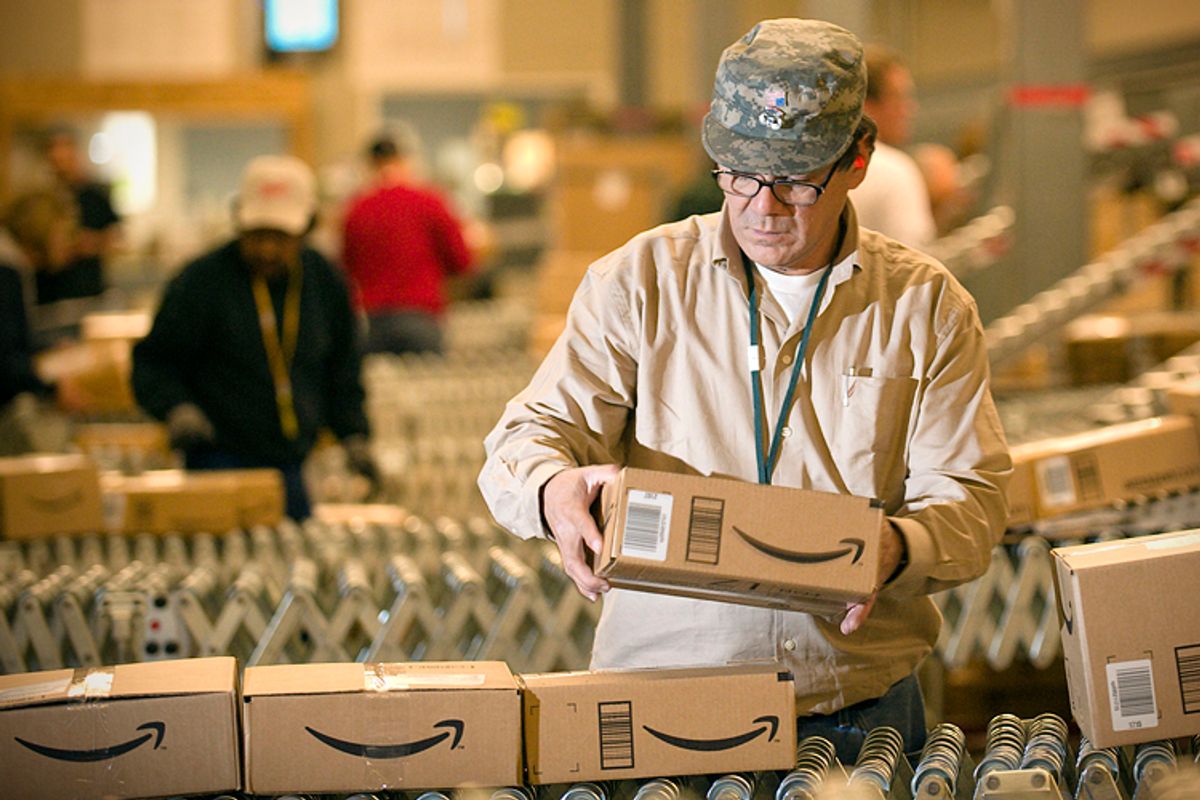 President Barack Obama will visit an Amazon warehouse in Chattanooga, Tenn., today to talk  job growth -- but the speech comes at a particularly awkward time for the government to embrace the company. Or perhaps there's no more apt time: a time when we need to ask whether Amazon's growth will lead to the kind of economy or culture we actually want to have.

This isn't the first time the administration has embraced Amazon: Obama's Justice Department, in April 2012, went after publishers and Apple for price-fixing, leaving Jeff Bezos' books-and-everything-else marketplace with what the New York Times called a "monopoly."

But this visit comes at a time when Amazon's clout in the book world, in Washington and on Wall Street seems increasingly unstoppable. Obama's speech is the exclamation point on a whirlwind several weeks in which Amazon has consolidated its position. Barnes & Noble looks increasingly shaky. Amazon lost $7 million in the second quarter, but Wall Street yawned again, sending Amazon shares higher.

And Amazon felt confident enough last week -- with Wall Street satisfied, bookstores reeling and the Justice Department going after publishers -- to radically slash prices on many best-selling hardcovers to nearly unseen levels: $9.09 for Sheryl Sandberg's "Lean In," $11.65 for Dan Brown's "Inferno." That's less than most paperbacks, and led one bookseller to call it a brazen "declaration of war."

"They've devalued the concept of what a book is, and turned it into a widget," said Melville House publisher Dennis Johnson, one of Amazon's most prominent critics. He also alleged that major publishers were afraid to speak on the record about Amazon's tactics for fear of retribution.

Amazon is evidently seen, by Obama and his administration, as the sort of American job-creating corporation that underpins the economy. However, unlike, for example, Walmart, a company with many deplorable practices but a massive ability to generate profit, Amazon uses everything (cheap, cheap books; distribution centers; the Kindle) as a loss-leader for everything else. Profits dropped again last week, though the company's stock didn't appreciably drop.

"Our discount cannot compare to what Amazon was setting their prices at, even before they started selling their books at 60 percent off," said Carson Moss, the buyer for Strand Bookstore in New York. "There's frustration that a company that hasn't turned a profit continues to be rewarded with higher stock prices and they can make seismic shifts in this industry."

A clue to Amazon's plan may lie in its recent decision to raise the prices of small-press and academic books, as they're among the only places such books can be procured. Though Moss said Strand is doing well thanks to its employees' expertise, when many of the currently existing places to buy "Gone Girl" and "The Cuckoo's Calling" are driven out of business, it seems fair to presume that the prices will go back up.

After all, Amazon U.K. recently announced that it was ending free shipping on many orders. As Johnson noted on his Melville House blog: "A price rise is inevitable, of course, whether it’s happening now or not. No monopoly in history has ever lowered prices. That’s not what monopolies do. That’s not why they exist. Amazon did not suffer losses for 18 years in order to achieve total market domination and nonetheless continue posting the kind of losses it posted yesterday … and the quarter before that … and the quarter before that, dating back to the company’s inception in 1995."

Amazon's also been painted as a pretty terrible place to work: A report on Gawker describes a Tennessee warehouse where employees take forced overtime and perform monotonous work with minimal break time, while a 2011 newspaper report on Amazon's warehouse in Allentown, Pennsylvania, told of over 100-degree temperatures and "a pace many could not sustain."

During summer heat waves, Amazon arranged to have paramedics parked in ambulances outside, ready to treat any workers who dehydrated or suffered other forms of heat stress. Those who couldn't quickly cool off and return to work were sent home or taken out in stretchers and wheelchairs and transported to area hospitals. And new applicants were ready to begin work at any time.

The weather forecast for Chattanooga during Obama's speech is 89 degrees with little wind, but, if only for the sake of optics, one wagers there won't be ambulances on call.

The company, indeed, is deeply aware of the press opportunity Obama's visit represents; it announced the creation of 7,000 new jobs across 13 states the day before the president's appearance. But Amazon's hardly a good corporate citizen -- those new jobs come thanks to a series of tax breaks that seem more than lucky.

For instance, the company got $269 million in back taxes forgiven by the state of Texas contingent upon the creation of new distribution centers and jobs. But as Johnson pointed out, "Amazon winds up doing what they were going to do anyway." A company that aims to get customers the books, DVDs and tchotchkes they want by the next day will need more and more distribution centers as its consumer base keeps growing, but they're able to spin the construction of distribution centers as a favor they're granting the state.

Amazon is bound up with the government beyond the state level; the company is contracted for $600 million to host the CIA's private data in its "cloud" system; the State Department withdrew its planned $16.5 million no-bid contract with Amazon in 2012, at the height of the Department of Justice trial.

But the investment in Tennessee that Obama is hailing is particularly notable, coming as it does as the result of an agreement between the corporation and Republican Gov. Bill Haslam, by which Amazon is exempt from having to collect sales tax until 2014 but has to create "at least 3,500 qualified jobs." The agreement, struck in spring 2012, allows Amazon some twenty-one months of material advantage over bricks-and-mortar retailers in the state, bound to collect sales tax and thus charge higher prices for books.

Amazon has, meanwhile, lobbied Washington in favor of a national online sales tax so as to penalize competitors with less robust consumer bases or looser ties with the government; after all, they've managed to skirt a statewide tax in Tennessee.

"The whole lesson," said Johnson, "is that tax avoidance worked for them. The only thing that can crack the Amazon monopoly is government intervention."