How to talk to a conservative about climate change 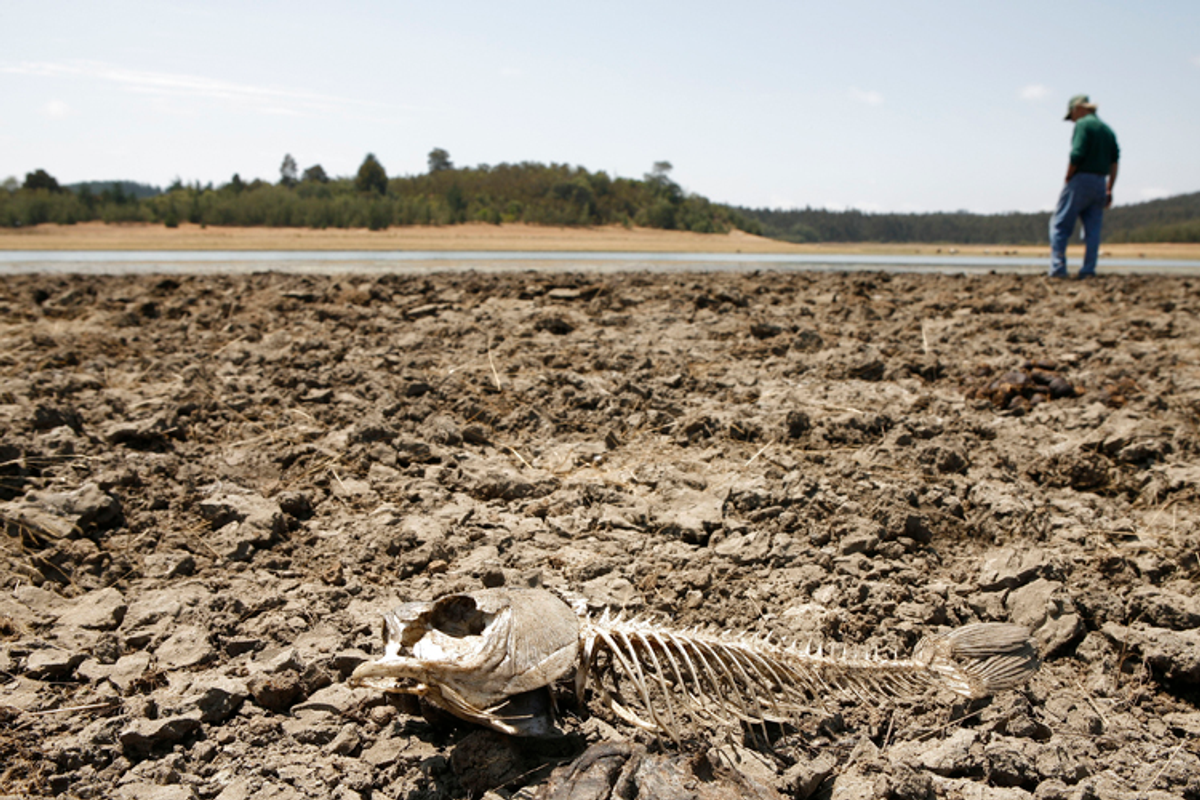 Our climate change debate is stuck in a "left-wing ghetto." That was one provocative conclusion reached during a high-level panel of politicians, environmental thinkers, journalists and business people in London, England.

"[Twenty] years of 'awareness raising,' grandiose pleas to save the planet, lots of talk about sacrifice, apocalyptic messages and photos of polar bears," a recent summary report explained, "have trapped climate change in a niche that it urgently needs to break out of."

Recent polling numbers support the panel's claims. Less than half of Britons firmly believe human activities are causing climate change, Angus Reid data from this spring suggested. The figures were similar for Americans.

Only 58 per cent of Canadian respondents agreed "global warming is a fact and is mostly caused by emissions from vehicles and industrial facilities" -- even though 97 per cent of climate scientists believe that to be true.

Activists, scientists and politicians similarly convinced by climate science have long struggled to explain why such large segments of society dismiss the urgency of global warming.

But a growing body of social science research has revealed an unexpected counter-narrative: for two decades the language, narratives and images of global warming have reinforced deeply held liberal values, it argues. Conservatives now see global warming solutions, and the science itself, as attacks on values they hold dear.

"There is a vacuum where a coherent and compelling conservative narrative on climate change should be," the U.K. panel report concluded, "and this vacuum has been effectively filled by sceptical voices." That is also the opinion of respected social scientists contacted by The Tyee in recent weeks. Yet their research on environmental communication suggests the situation is still reversible.

Below are some of that research's most important insights, a roadmap potentially leading our climate change debate out of its "left-wing ghetto."

1. We're all a bit irrational

Why do liberals seem to care more about the environment than conservatives? One influential explanation holds that left and right-wing people approach moral questions from profoundly different perspectives. Research by New York University psychologist Jonathan Haidt and others forms the basis for "moral foundations theory," which breaks down human morality into distinct categories.

People who identify as politically liberal tend to have strong emotional reactions to questions of "care/harm" (protecting vulnerable elements of society) and "fairness/cheating" (making sure that justice is upheld).

Environmental arguments often evoke both. For instance: "Alberta oil sands firms are not held accountable (fairness/cheating) for their contribution to a warming climate that will ultimately harm the planet's poorest people (care/harm)."

The logical left-wing reaction is to demand strict limits on oil sands emissions. But that climate change solution can provoke strong emotional reactions from people who identify as politically right-wing.

So the right-wing response to oil sands limits might be: "Since all Canadians benefit from our oil and gas industry (loyalty/betrayal), we shouldn't restrict free markets (authority/subversion) to limit a naturally-occurring, odorless gas (sanctity/degradation)."

These types of emotional reactions are so deeply ingrained in our psyches we often don't realize they're affecting our perceptions.

Yet getting conservatives concerned about global warming means liberals need to first recognize their own moral biases, and how the climate arguments they make can reinforce them.

"We all have gut-level reactions to things," Ravi Iyer, a University of Southern California researcher who's collaborated with Haidt, told The Tyee. "It's good to realize that we're all kind of irrational."

That realization seems to have eluded most proponents of climate change action for the past two decades, particularly the idea that people filter information through their emotions, rather than the other way around.

Instead, many activists, scientists and politicians believe that if the public was only better educated about the science and impacts of global warming, then it would respond to the issue more urgently. That's true to a certain extent. Former U.S. vice-president Al Gore's Oscar-winning documentary, An Inconvenient Truth, as well as the lecture tour that accompanied it, undoubtedly raised the profile of climate change.

But plying the public with information may not be enough.

"I don't want to argue that facts are irrelevant," University of Michigan professor Andrew Hoffman, an expert on environmental politics, told the Tyee. "But it's also important to recognize how [those facts] are received."

What he means is that people don't coolly analyze information before making a moral judgment. Rather, they approach information with coherent moral views already in place.

So when liberals learn, for instance, that human activity is warming the planet, they're already morally primed to believe that oil sands firms and other fossil fuel companies must reduce their carbon emissions.

But conservatives, who might feel these companies support the Canadian way of life, may go out of their way to reject any information undermining this belief, including the fact that human activity is warming the planet.

"Once someone connects a position on an issue to their cultural identity," Hoffman said, "to try and get them to accept something that contradicts that identity is really challenging."

3. Too much fear will backfire

One tactic used again and again by climate change campaigners is fear: alarm the public enough about rising sea levels, extended droughts and infectious diseases, and surely it will be convinced to take action on the issue.

Fear is no doubt one of the most powerful human emotions. Yet social science research suggests deploying it too much can actually increase conservative skepticism of global warming. That's because conservatives are more prone than liberals to believe fundamentally that the world is ordered and stable, good deeds are rewarded in the future and punishments await those who deserve them.

Liberals, on the other hand, generally accept that the world can be chaotic and unjust, a place where future generations who played no role in creating global warming will suffer nonetheless.

One fascinating study, conducted in part by Stanford University's Robb Willer, suggested when people's belief in a just world is challenged by dire climate predictions, they become less determined to shrink their carbon footprint.

"Scary, apocalyptic messages about the likely consequences of global warming are something conservatives can dismiss psychologically," Willer told The Tyee. "[Liberals] are less committed to viewing the world as stable and enduring." Willer isn't suggesting people downplay climate change's severity. But research by him and others shows that for fear-based appeals to effectively engage conservatives, they must be tied to readily available solutions.

"There has to be something realistic people can do that could stop the apocalypse from happening," he said. "People committed to a just world are then more inclined to believe in global warming."

Knowing that left and right-wing people approach morality from different perspectives, filter facts through separate emotions and aren't motivated equally by fear, how can a climate change campaigner hope to be heard across the divide? Perhaps by handing the microphone to someone else.

Influential research by Yale University's Dan Kahan suggests that people's positions on climate change -- whether liberal or conservative -- are strongly influenced by the cultural groups to which they belong.

"Take a barber in a rural town in South Carolina," he wrote last year. "Is it a good idea for him to implore his customers to sign a petition urging Congress to take action on climate change? No. If he does, he will find himself out of a job."

Likewise, a vendor on Vancouver's Commercial Drive is not going to do much business by urging passerbys to support Alberta's oil sands. Such cultural attitudes on global warming are deeply ingrained and often unconscious.

In many cases they're influenced by trusted opinion leaders. David Suzuki, for instance, speaks to a certain type of environmentalist, while the CEO of ExxonMobil, Rex Tillerson, reaches another cultural group entirely.

For two decades scientists, activists and politicians (many of them politically liberal) have framed our climate change debate. No wonder they've failed to engage large sections of the public, argued Susanne Moser, an expert on climate communication.

"Often the messenger matters more than what the messenger says," she told The Tyee. "If you want to talk about the health impacts of climate change, get a doctor to do it, not a scientist." The same applies to conservative audiences. A right-wing talk-radio host is going to have much less trouble engaging that South Carolina barber on climate change than an environmentalist.

But in order to convince opinion leaders outside the so-called "left-wing ghetto" that global warming is an urgent issue, campaigners need to speak a different language. And that might mean not invoking "green" values at all.

One recent study suggested that when energy-efficient lightbulbs are presented as cost-savings opportunities, both liberals and conservatives are more likely to buy them. Explicitly mention their climate benefits, though, and conservatives shy away.

"There is likely to be a significantly sized group that may not like these environmental messages," the University of Pennsylvania's Dena Gromet, lead author of a report on the study, told NBC News.

That's a lesson General Electric seems to have learned. In 2005 it unveiled a major public relations campaign called "Ecomagination," pledging to invest $1.5 billion in clean technologies by 2010. Late last year, however, when announcing plans to develop the "Industrial Internet,"which could arguably produce gigantic green benefits, General Electric shunned "any mention of climate change or sustainability," GreenBiz reported. Company chairman and CEO, Jeffrey Immelt, instead "described the potential to cut billions of dollars of energy from sectors like aviation, railroads, power generation and oil and gas development."

Immelt clearly knows how to speak the language of business. An army official, however, might describe climate change as a "threat multiplier." For the Vatican, global warming obliges us to protect "the vulnerable of the Earth."

And this may be the most important insight of all, that a warmer climate is not just an environmental issue, but something with profound cultural implications for everybody.

"It is," after all, in the words of the recent U.K. panel report, "an issue that transcends politics: something that people of all political stripes -- left, right or centre -- have a stake in."