Eric Holder found a way to use the Voting Rights Act to fight Texas voter restrictions. Now other states await 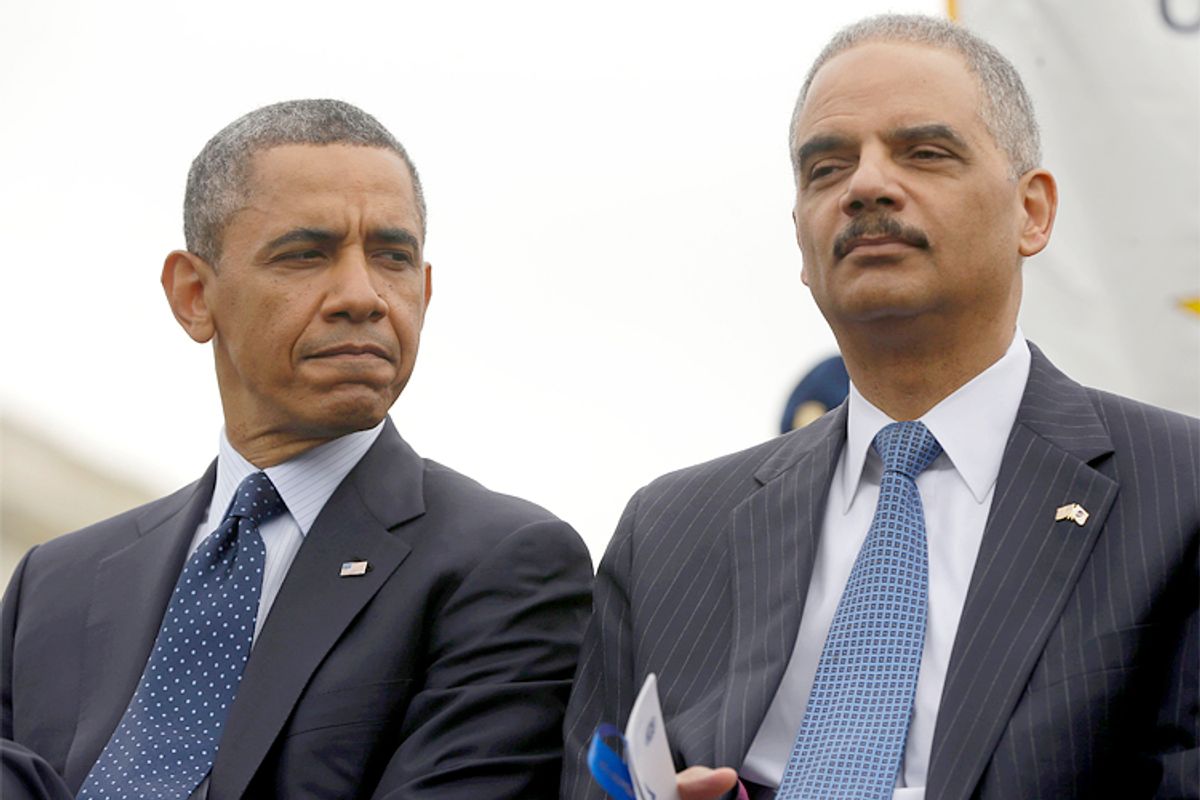 With North Carolina GOP Gov. Patrick McCrory ready to sign the most restrictive voting rights bill in generations (though he may not know what’s in it), one influential Republican is backing Attorney General Eric Holder’s decision to use a creaky but powerful section of the Voting Rights Act to challenge a similar law in Texas. “The [Justice] department’s actions are consistent with the Voting Rights Act,” Rep. James Sensenbrenner, a VRA reauthorization co-sponsor in 2007, told The Hill last week. “Increased litigation will be one of the major consequences of the court’s decision as courts will have to litigate more allegations of voter discrimination.”

Here’s hoping Holder makes North Carolina his next target, if and when McCrory signs the bill.

No, Governor, there isn’t: You can’t register online in North Carolina, and the bill limits other access to the ballot. Asked directly about the nonsensical provision limiting pre-registration for young adults and repealing a state law requiring high schools to do voter education and registration with students turning 18, McCrory pled ignorance. "I don't know enough, I'm sorry, I haven't seen that part of the bill," he replied.

The package is ostensibly designed to cut back on voter fraud, although since 2000 there have only been 22 cases of voter fraud in North Carolina. That’s less than two a year if you’re counting.

I always that think if basic decency doesn’t get politicians to do the right thing, maybe shame will, so I’m happy that McCrory’s been shamed about his ignorant support for a terrible bill he hasn’t read. But he’s expected to sign it any moment now. If shame won’t work, there’s always voter outrage. It’s been heart-wrenching to see so many of the Southern states once subject to preclearance of voting rights changes by the Justice Department immediately rush such changes into law after the Supreme Court’s decision. Not just Texas and North Carolina but South Carolina, Alabama, Mississippi and Virginia quickly announced plans to move ahead with voter restrictions that almost certainly would have been rejected under Section 5, and some that already were rejected.

But maybe that dancing in the end zone by Southern Republicans, thrilled they can finally enact their voter-restriction agenda, will attract the attention of both voters and politicians, even Republicans, to the policy of voter exclusion that drives such legislation. Sensenbrenner has backed Holder’s move in Texas and is committed to new legislation. Even Eric Cantor is said to have been moved by his trip to Selma with Rep. John Lewis, and ready to support a new bill (I’ll believe that when I see it).

But it’s important that even without a new bill, the White House intends to use the laws on the books to challenge the new wave of state restrictions. Preventing these measures may be slower and creakier – now the Justice Department has to block discriminatory laws from taking effect rather than getting to approve or reject such laws in advance -- but it’s doable.

On Monday Obama told 15 civil rights leaders gathered at the White House that the Justice Department will look beyond Texas at possible challenges to new voter restrictions. “He said that the Supreme Court took away a very useful mechanism, his exact words, so that we didn’t have to go around chasing bad behavior and that now, unfortunately, we will have to do that,” Janet Murguía of the National Council of La Raza told Politico.

It’s a shame we have to defend rights we already fought for and won, rather than securing new rights, but history usually involves a two steps forward, one step back kind of progress. I’m hoping that voting rights defenders can put together a bipartisan coalition to restore Section 4 or some other kind of preclearance power to the Justice Department, but even without it, I’m glad the southern triumphalists know they can’t push their agenda without some legal pushback.